The original Pokemon Snap game is a gem that many adults remember playing as a child. The game saw players travel along a track from one point to the other and instead of fighting Pokemon with Pokemon, you would snap photographs of the critters as you explore their natural habitats. For the most part, it managed to give players that sense of wonder as they got to imagine a real-world where Pokemon lived in peace instead of hiding in 16-bit patches of grass. A whopping twenty years later, New Pokemon Snap aims to do the same thing but with prettier visuals, more Pokemon and a dedicated story.

New Pokemon Snap is exactly what the name suggests. It is the “new” version of Pokemon Snap. Instead of Nintendo embracing a low price point for this smaller, arcade-like game, it will set you back a full R1,129. It is a lot to ask for what you’re getting here. For the most part, the entire New Pokemon Snap experience can often come across like a mobile spinoff. The gameplay is tedious, the story is shallow and the depth of the mechanics are as interesting as Magikarp’s Splash move.

The game follows a researcher as they explore a new region in the Pokemon world called Lental. I started off with the ability to choose from a range of avatars and once in, I met Professor Mirror and his assistant Rita. The premise of New Pokemon Snap is simple. Explore each location a couple of times, take photos of Pokemon and other interesting objects while a rail pushes you from one point to the other and unlock other regions after repeating the location over and over again.

The Lental region has also been inhabited by a strange Pokemon type called the Illumina Pokemon. This Pokemon type glow in the dark and also allowed me to toss orbs at them to brighten up the scene. The safari-like approach to New Pokemon Snap is fun. Every location feels and looks like it is untouched by man and the Pokemon live happily in the area and go about their daily lives. 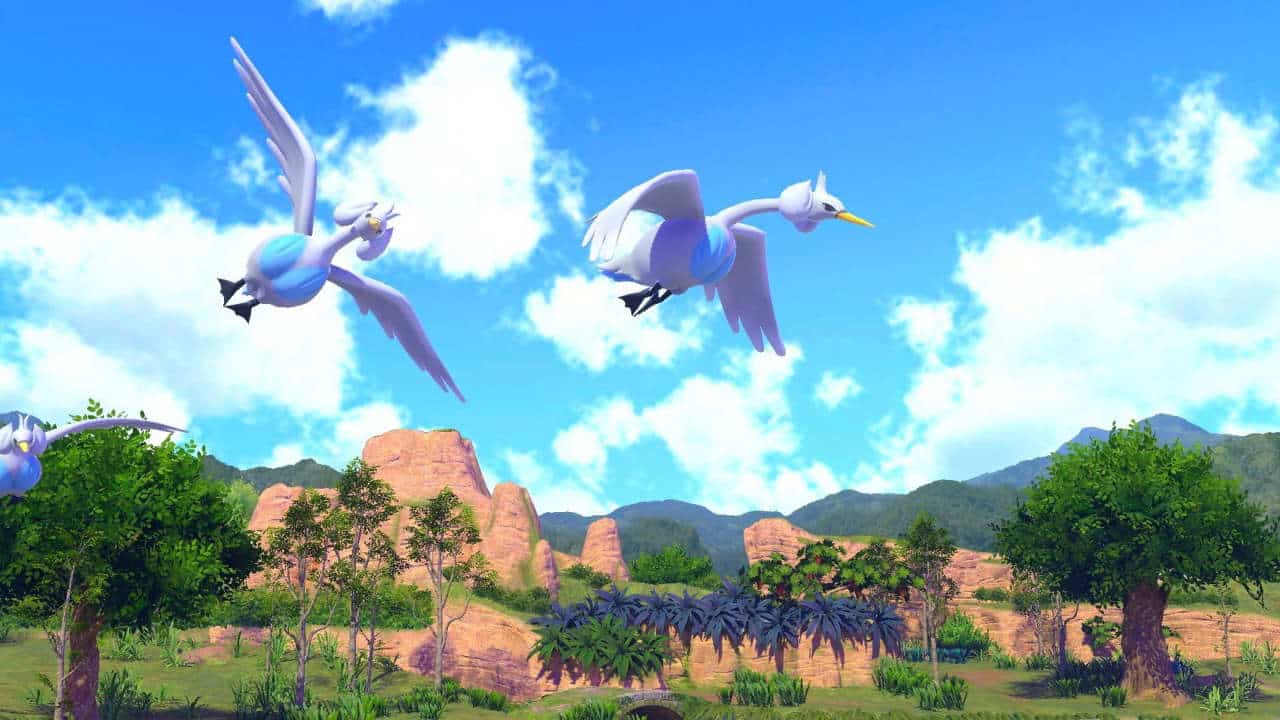 While the series has close to one thousand Pokemon now, New Pokemon Snap only includes over 200 of them but it shouldn’t matter. I never sat there thinking to myself “where is xyz Pokemon?” Instead, I was constantly left surprised when I spotted my favourite type and even more excited when I saw the legendaries including Mew, Celebi and Lugia. It also helps that these Pokemon look amazing in the game and even more so when they are soaring through the air or crawling through bushes.

The goal for each location is simple: you have to take amazing photos of Pokemon. How you do this is completely up to you but after each stage, the Professor will act like a trained photography critic and score your photographs according to specific criteria. This includes pose, size, placement, other Pokemon in the scene and other factors. There are also four different stars for each Pokemon and obtaining each star depends on what the Pokemon is doing when you snap the photo. 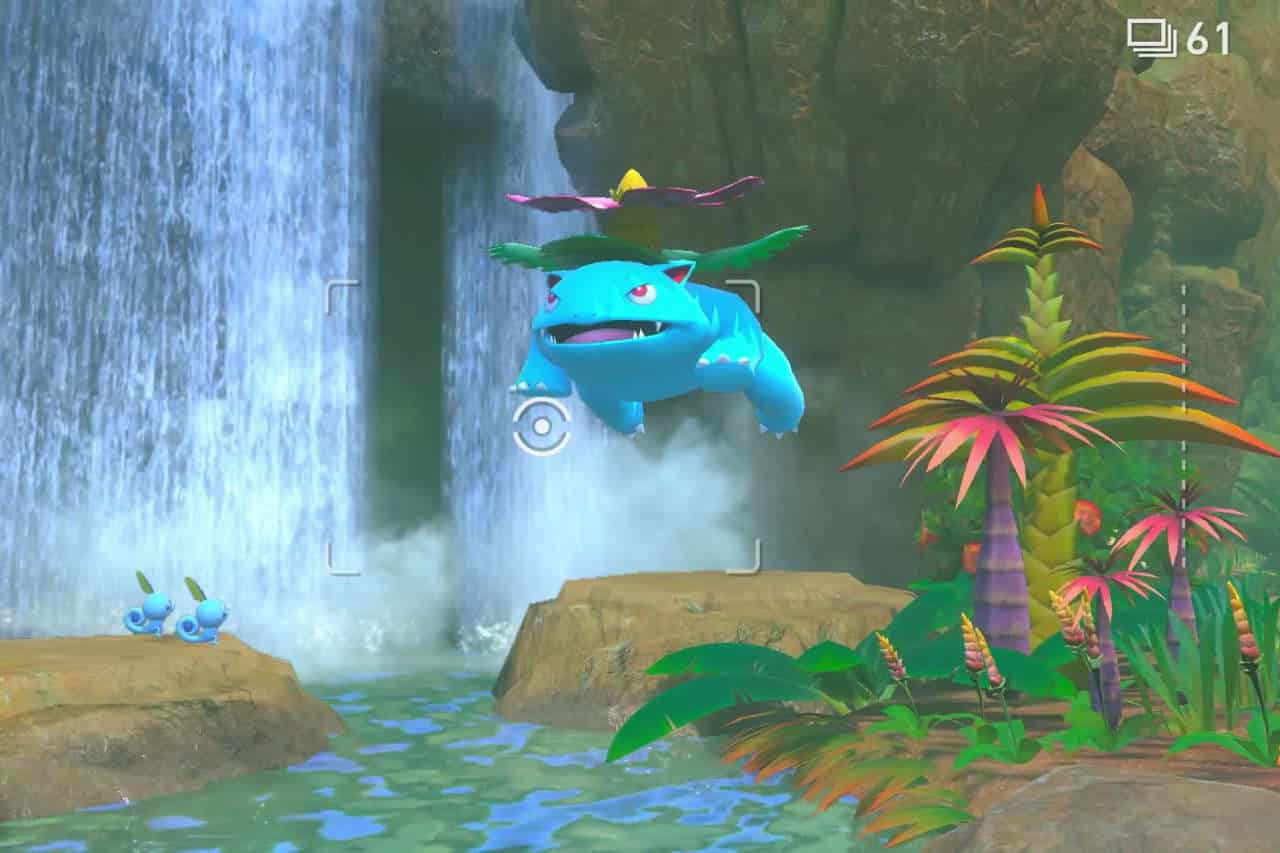 If the Pokemon is glowing, it is 3 stars. If it is moving, two stars. Each of these can also range from bronze to platinum score depending on how well your shot is. The scoring system is great and it works. The further I got into the game, the more I took into account the requirements to score the best photo. I made sure to take my time instead of spamming the photo button to get my shot. There was a great level of excitement while railing through the location to the end waiting in anticipation to see how well my photos did.

Each stage is also packed with loads of secrets that when found, spawns rare Pokemon and at times causes certain ones to act in special ways to get better shots. This goes hand in hand with the items I could use including apples to toss at them and even music I could play. Everything has a reaction and experimenting with it all is where the game shines. However, this does mean I had to replay the same level a couple of times to see it all and experiment with all the various interactions. There is a good and a bad side to this. It is fun to do but can get rather tedious fast. 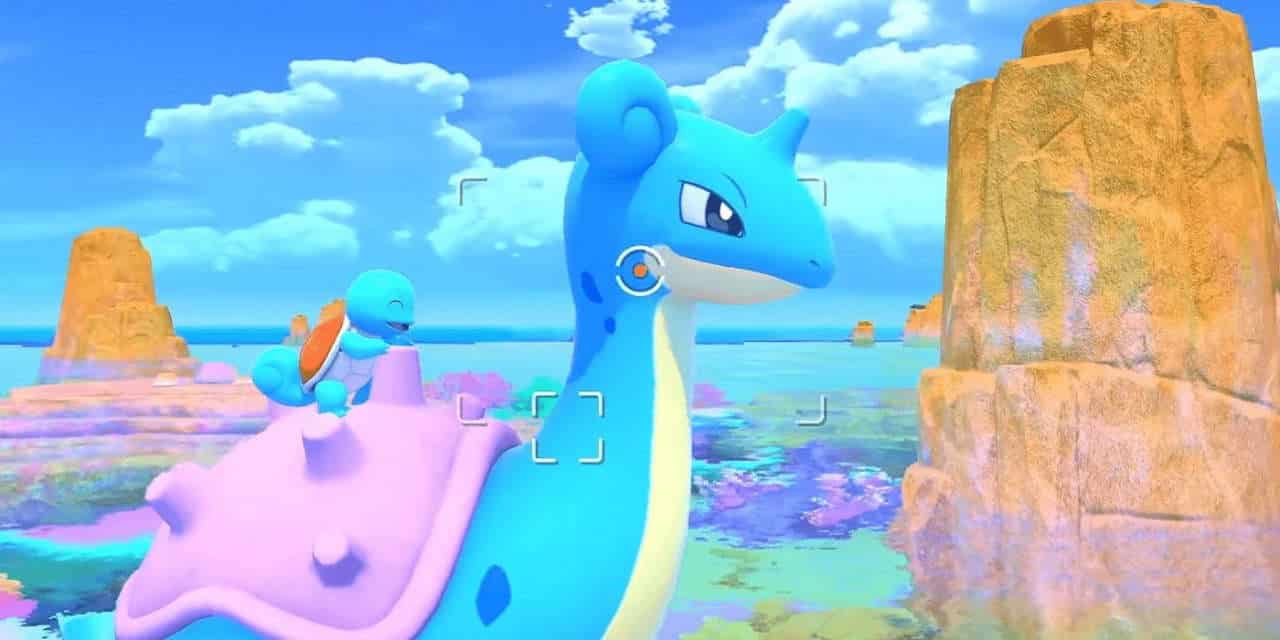 Getting around New Pokemon Snap is easy enough and the controller is simple enough to get used to fast. I even let my niece give the game a go (she is 11) and after looking at the floor for most of the stage, she managed to get better at the camera movements. You can move around with the gyroscope too which makes getting that perfect angle much easier.

It does get a bit overwhelming once you have all the items and mechanics unlocked. Often tossing an apple at a Pokemon while trying to scan a nearby item and getting the best shot before you move around the corner can be a challenge. In short, it takes some getting used to and kids may find it all a bit cumbersome. 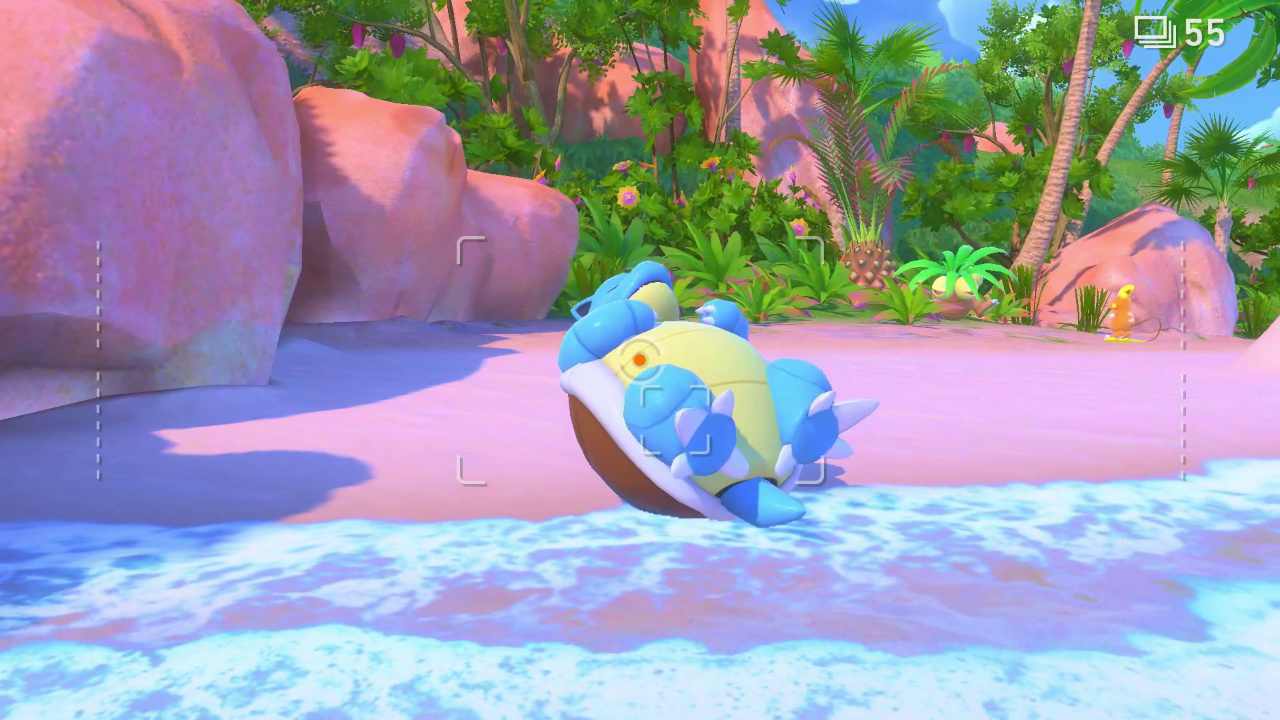 Thankfully, New Pokemon Snap is a gorgeous game and its charming visual carries it through the most tedious moments. There was nothing as magical as seeing “that” one Pokemon for the first time pop out of a cave or swim past under the raft. I could not help but quickly try and snap a dozen shots of it in haste. Returning to each level to upgrade the research rank can be a chore, but often I found new things to see and Pokemon to snap. It is almost like there’s a never-ending supply of change in some locations and this feature helps break the monotony.

I loved my time with New Pokemon Snap. The game is a joy. However, I could not help but feel like the asking price of R1,129 is a little steep here for what it is. This is not a full-blown Pokemon experience. It gets tired quickly, is limited to how interested I was in taking photos and not everyone will jump at the idea of the game. It has been twenty years and things have changed. This price tag should have been one of them. If you’re a die-hard fan of the original you will love this. Kids will too but they aren’t buying it so you need to weigh up the options here.