I have had a few PC cases over the past few years. An MSI one, an Evetech one which was awesome, but I have always wanted a white case. There’s something special about it not being that cliche black shade that makes it appealing to me as it does not fall into that run-of-the-mill design style. NZXT dropped off the H510 Elite and it is one of the more premium PC cases on the market. Of course, its biggest selling point for me was its compact design being almost half the size of other cases I have owned while still being able to fit everything into it.

Check out our video review of the case;

The case is pricey coming in at R2,499 in SA but if you value premium design, then it is worth the asking price. If anything, its build quality and sleek design fit right into my lifestyle being as minimalist as possible when it comes to tech. For those of you who enjoy bright and bold PC cases, the NZXT H510 Elite is very different. It does not overcompensate for anything when it comes to the design of the case and every side is just simple. The two tinted tempered glass sides stick out against the white shell found everywhere else and its dual-tone appearance looks like a Stormtrooper transformed into a PC case.

Clean and attractive is what NZXT is going for when it comes to the design and every inch of the case makes this quite obvious. The metal and glass used for the shell feel premium and well-made while inside of the case have some high-end plastic that is found throughout the box. 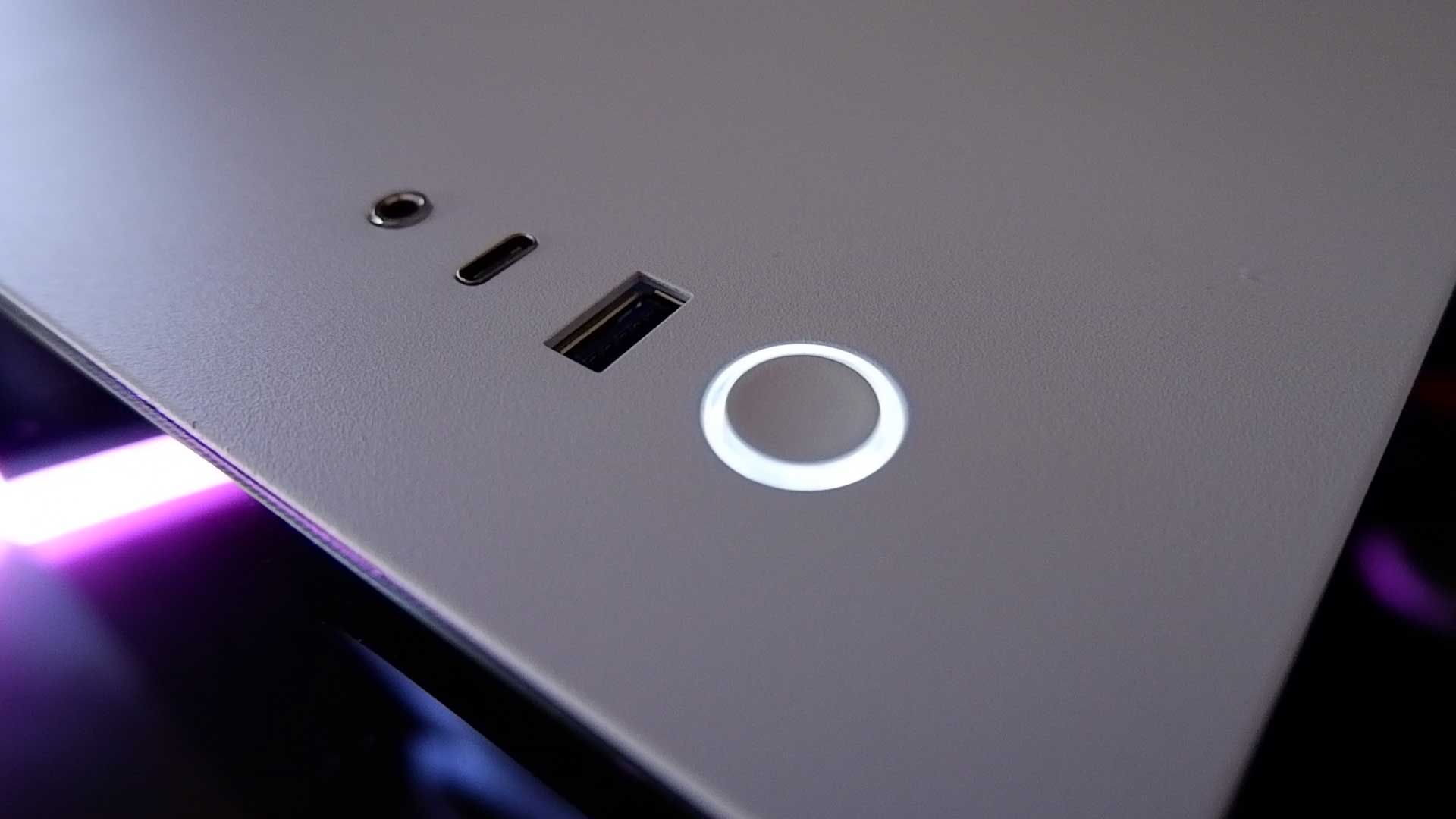 The metal in the case is galvanized cold rolled steel and it is sturdy and bearly bends at all. It also contributes quite a lot to the 7.5Kgs that this case weighs. 7.5Kgs is not heavy at all when it comes to PC cases and is actually one of the lighter ones I have reviewed.

On the top, we have a simple white sheet of metal with just three ports next to the sleek power button. The top also acts as another vent for a fan which does not come in the box. I know, strange, we even emailed support to ask them and they confirmed that while the NZXT H510 Elite case has a fourth fan slot, they do not include it in the package. The three ports on feature a USB 3.1 Type-A and 3,1 Type-C port along with a headset jack. Two ports on the top are very low considering the reliance on USB devices in today’s world. I would have liked to have at least one extra one.

The one side features a full glass panel that is held on by one screw. Each of the glass panels has a nifty rubber connector that slots into the case’s mainframe for extra support. These also come in handy when you unscrew the glass as the sheet does not fall out thanks to these rubber connections. 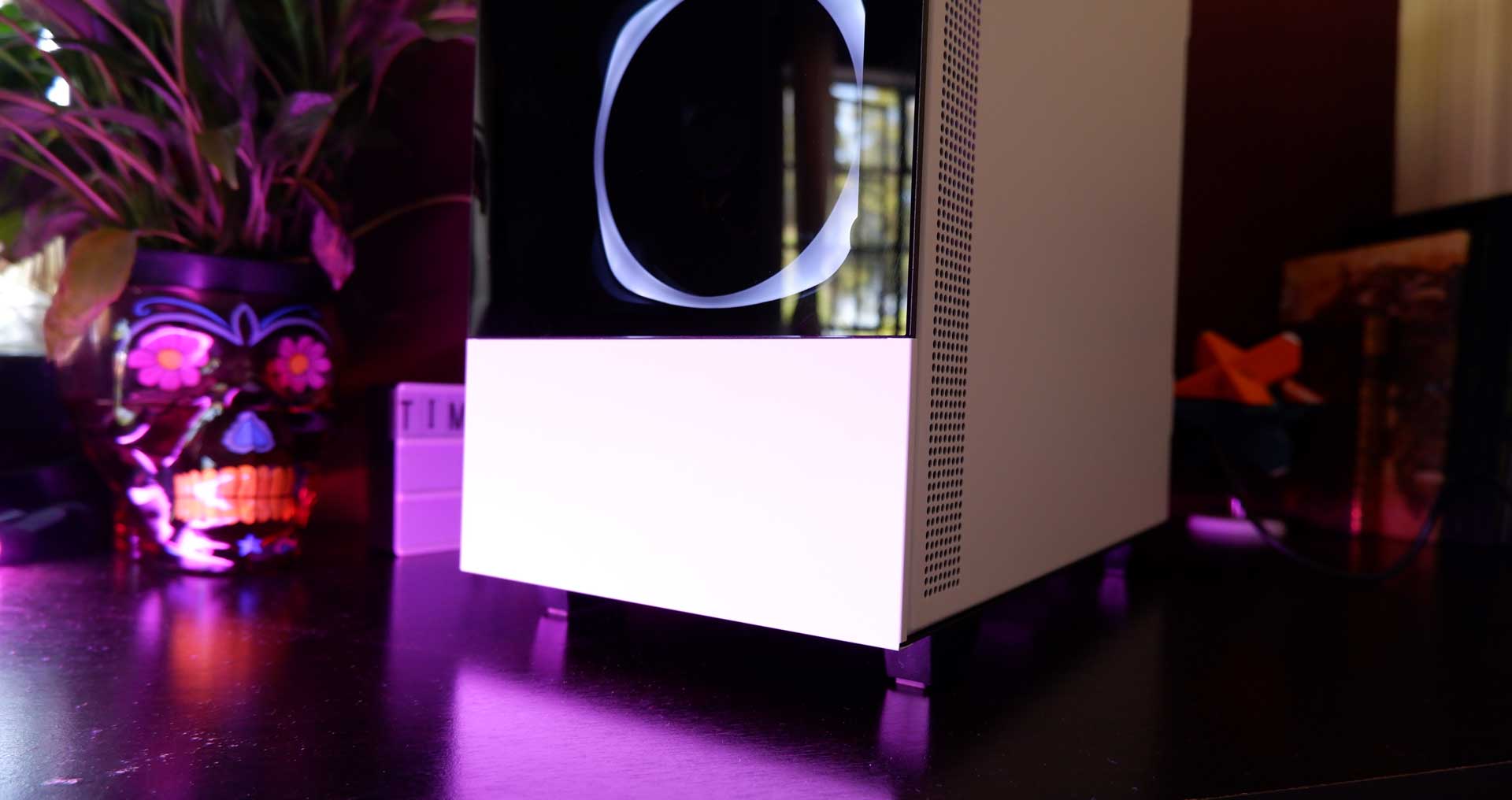 On the other side, we have a sheet of metal that covers up the ugly side of your PC where all the cables are placed. Strangely, the 2.5-inch drive mounts are also on this side which hides them away. Installing them was super easy. Once they are both open you can fiddle around inside the PC and build your dream machine to your heart’s content.

Think of this side of the case being the one you use for all the cables and things you don’t want people to see. Your 3.5″ HDD and power supply also go in here. The PSU also slots in very easily into the case. In terms of cable management, there’s a nifty rack that all your wires can run down once you have connected your motherboard and other hardware. This rack is meant for the water-cooling pipes but as I don’t use the tech, the cables went in just fine. 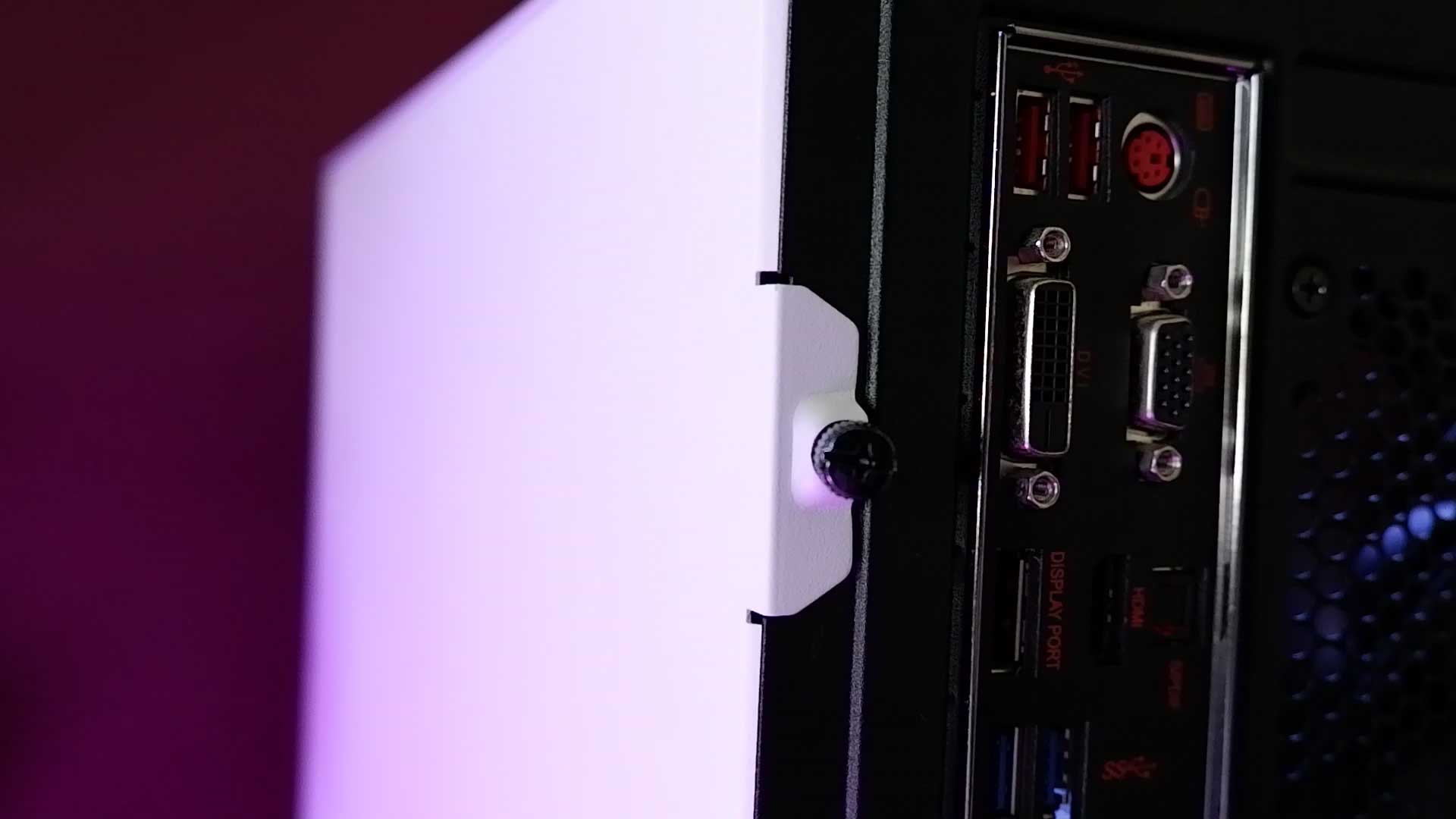 When it comes to the case’s Smart Device V2, it is located on the top corner of the metal side of the case. It is here where you will plug in any extra fans you buy and that one you have to purchase because it did not come with the case and should have in the first place.

Cable routing was never an issue while building the PC either. The case has a load of clips that makes the experience neater and for every cable, you have running through a hole there is a clip or a shaft to keep it in neatly. The cable bar, a white strip of metal also acts as a cover for the mass of cables that run through to the back of the case.

Putting everything in the case was simple enough. The slots were plenty and the more I experimented with the case, the more I discovered new ways I could use it if I had the appropriate hardware. One example was being able to mount my GPU vertically, but I needed a bracket for that which I had to purchase. Overall, the process of building the PC was simple and the case had everything I needed for a modern PC build. 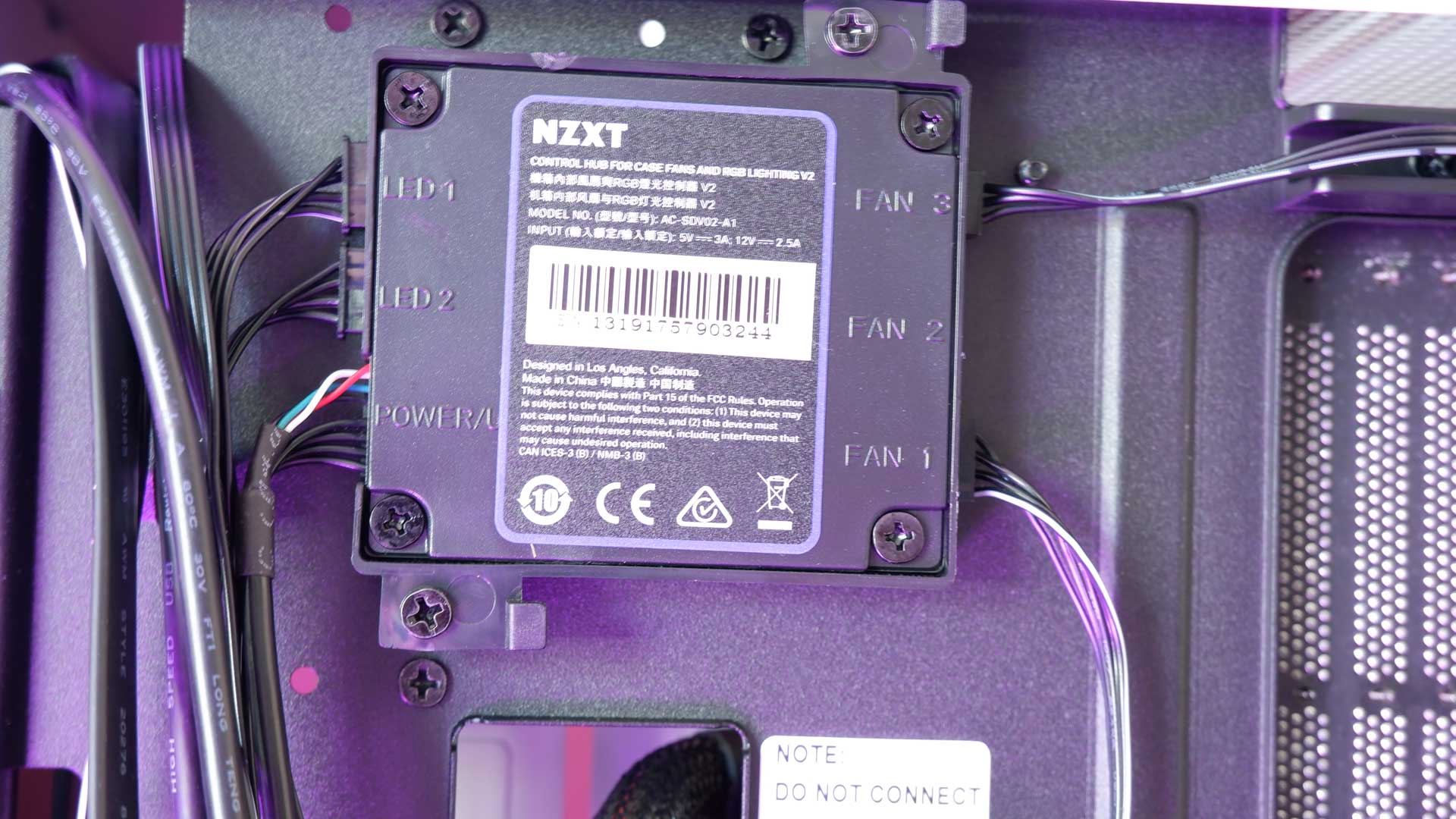 Cable management was decent and even though I preferred to have my SSD on the front, hiding it away grew on me as it just added to the clean look the case delivers.

Once powered on, the real beauty of the case comes to life and it is sleek. There is a top strip of RGB lights that add just the right amount of lighting to the case to make it look clean inside. This strip shines down on your hardware and looks great while doing so.

The two front fans also feature a rounded white light that does not dim or flash. They just shine brilliantly. The back fan, unfortunately, does not have RGB but the more I embraced the case’s sleek design, the less I felt it was necessary. 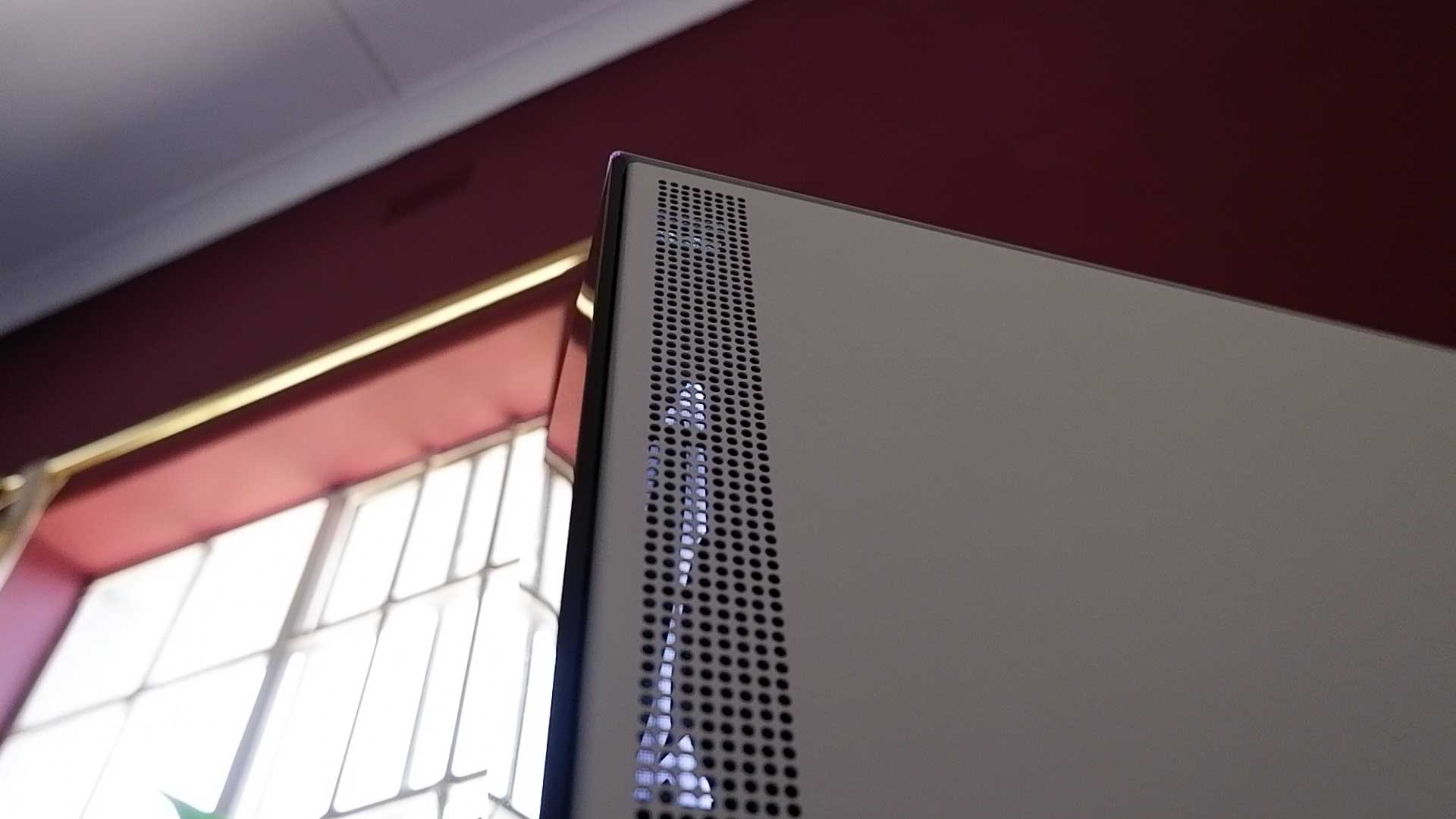 Once it was all set up, it was neat and followed the overall design of theme of the case by keeping things to a minimum. The feet prop the case up off the table and when turned on, the case looks fantastic on your table. It is smaller and compact and the white is just so clean and sleek.

I do think the NZXT 510 Elite has a fantastic design and form but there were some issues I could not help but want to be changed. Where is the fourth fan? Why would they not include one in the box? Now, there is a massive vent just sitting there open without any function. It would have been better value for money to include one even if you do use water cooling. 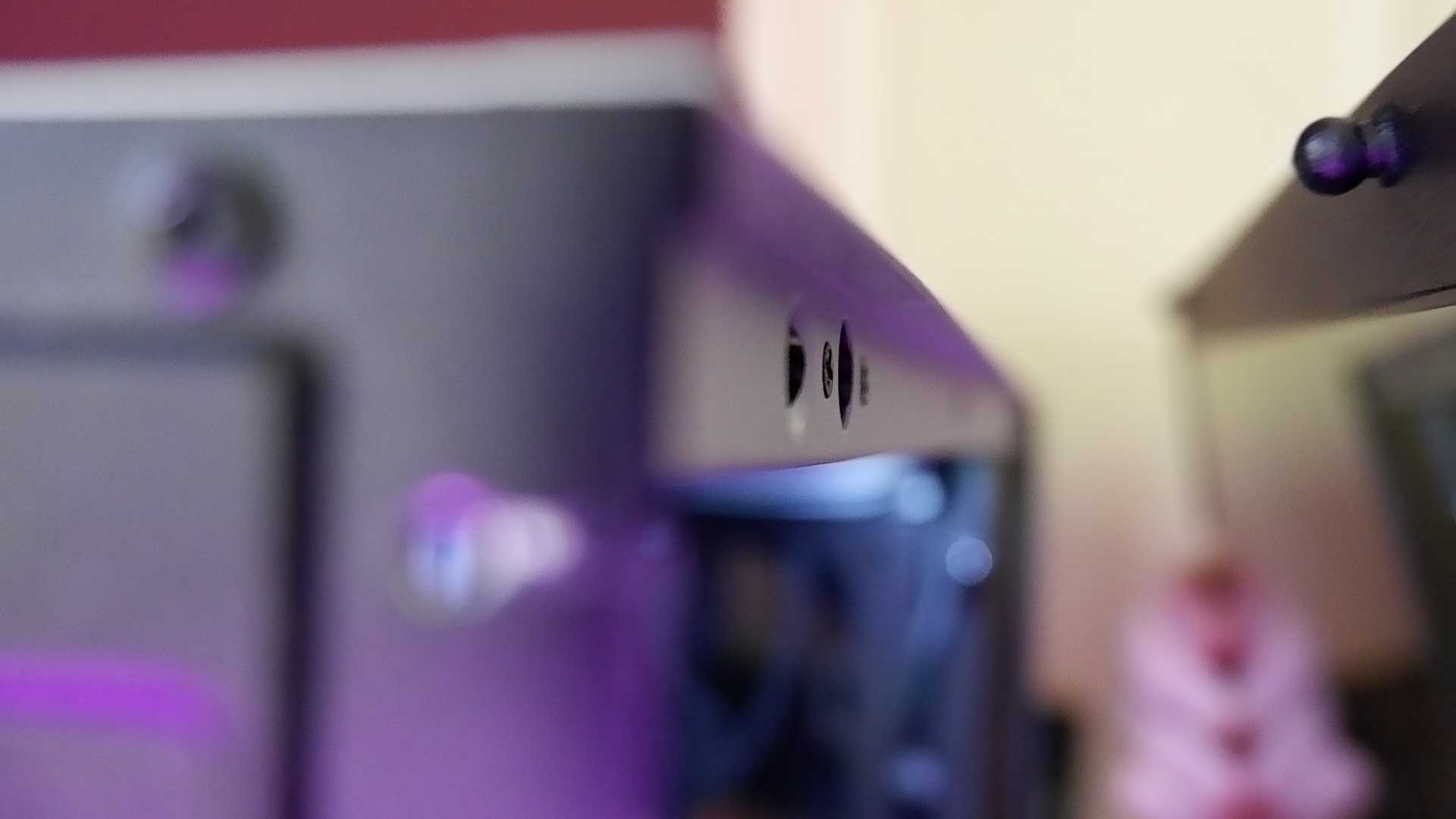 Lastly, while not the end of the world, it would have been nice to have another USB port on the top. Just one more for ease of access, I use a USB Wi-Fi dongle and now that port is always occupied.

The NZXT H510 Elite gaming Case does its job of bringing a sleek design to your PC. It is white and the lights are white. No fancy colours here but maybe that is what you are looking for? I for one embraced the simple design and lack of flashing aura lights and the case became a part of the furniture. It could be one of the most compact and stylish white cases on the market if you are willing to splurge on its price tag.