After spending a few days playing PGA TOUR 2K21 during a special preview event, there was nothing majorly new for me to experience in the main game. Sure, there’s a subtle difference between playing the game on PC compared to PS4 which I used for the preview version, and the online matchmaking was enabled. However, the game still holds up as one of my new favourite past times. After a bad day, I booted it up and played a round of golf. The cheers from the crows, the swing of my club and the thump of the golf ball hitting the ground added to this tranquillity that comes with playing golf.

We then have the course maker which is now packed full of some great custom-made courses adding months of replayability to the game. PGA TOUR 2K21 is here to stay it seems and this is thanks to the combination of great gameplay, an array of modes and of course, the stellar accessibility.

HB Studios has had time to craft PGA TOUR 2K21 after the series went into hiatus in 2018. Sure, the game is far from perfect and suffers from a few downfalls. This includes missing gameplay modes and customization features. However, underneath the flaws, there’s a solid stepping stone pathway for improvement. Hopefully, the only way forward is up and the much-needed break means this is only the start of something greater. 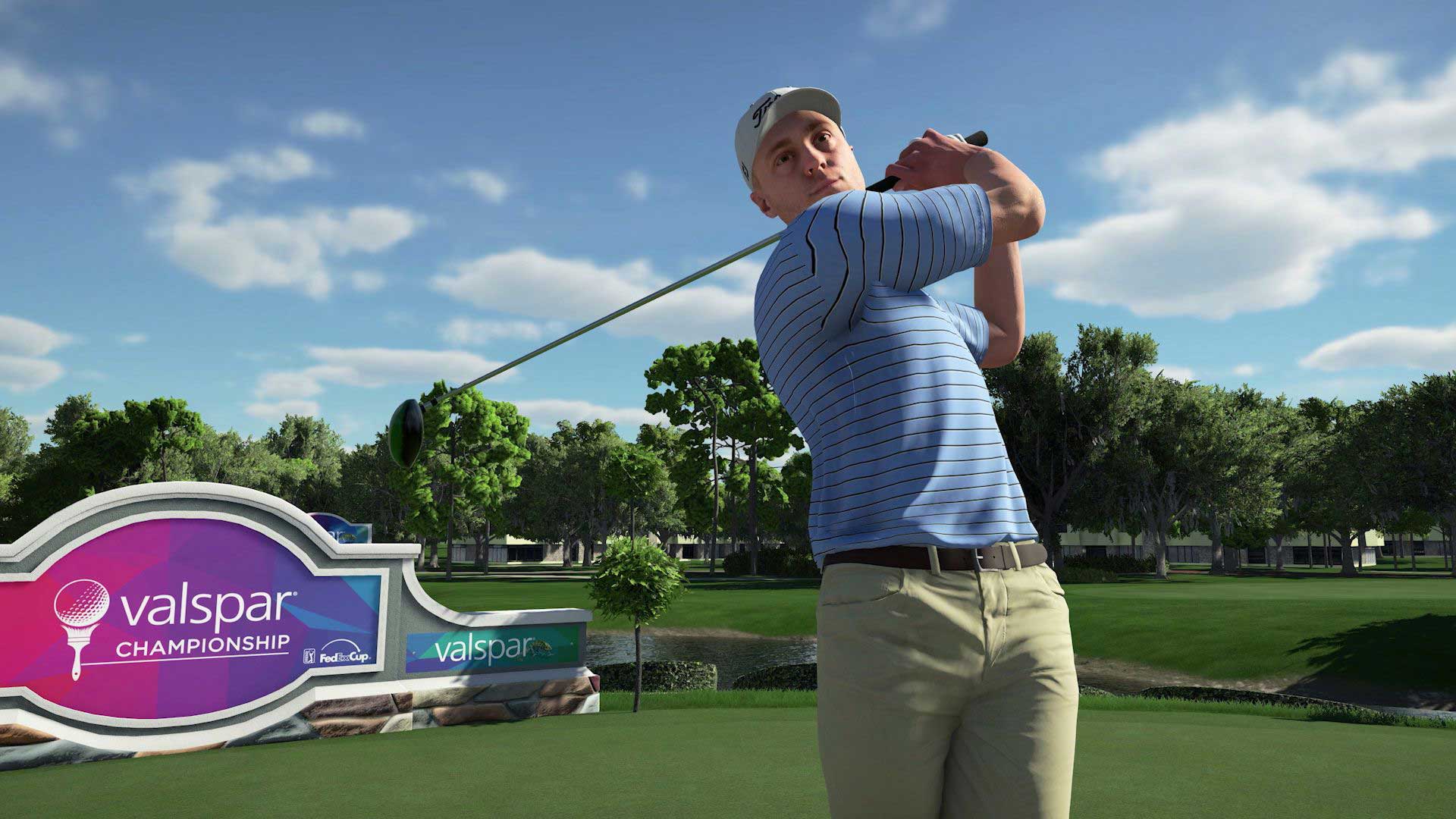 Starting PGA TOUR 2K21 for the first time, I was introduced to the basics of gameplay. This series of tutorials did a great job explaining the mechanics and dos and don’t of golf. How to tell if the green is slanted downwards, how to putt out of the sand and how to perform a perfect swing using the vast array of shots available. This opening did a great job throwing me into the game and while I still had much to learn, I felt confident I knew enough.

Swinging is simple yet challenging. On the DualShock 4, you use the analogue stick to pull the club backwards and flick it forward with your thumb. The more I pulled it back, the more powerful my shots got. Flicking it forward is also tricky as it needs to be straight. A simple diagram at the bottom revealed just how straight my shots were. We then have other factors to consider such as the curve, distance and overshot which all play into the success or failure of your game. 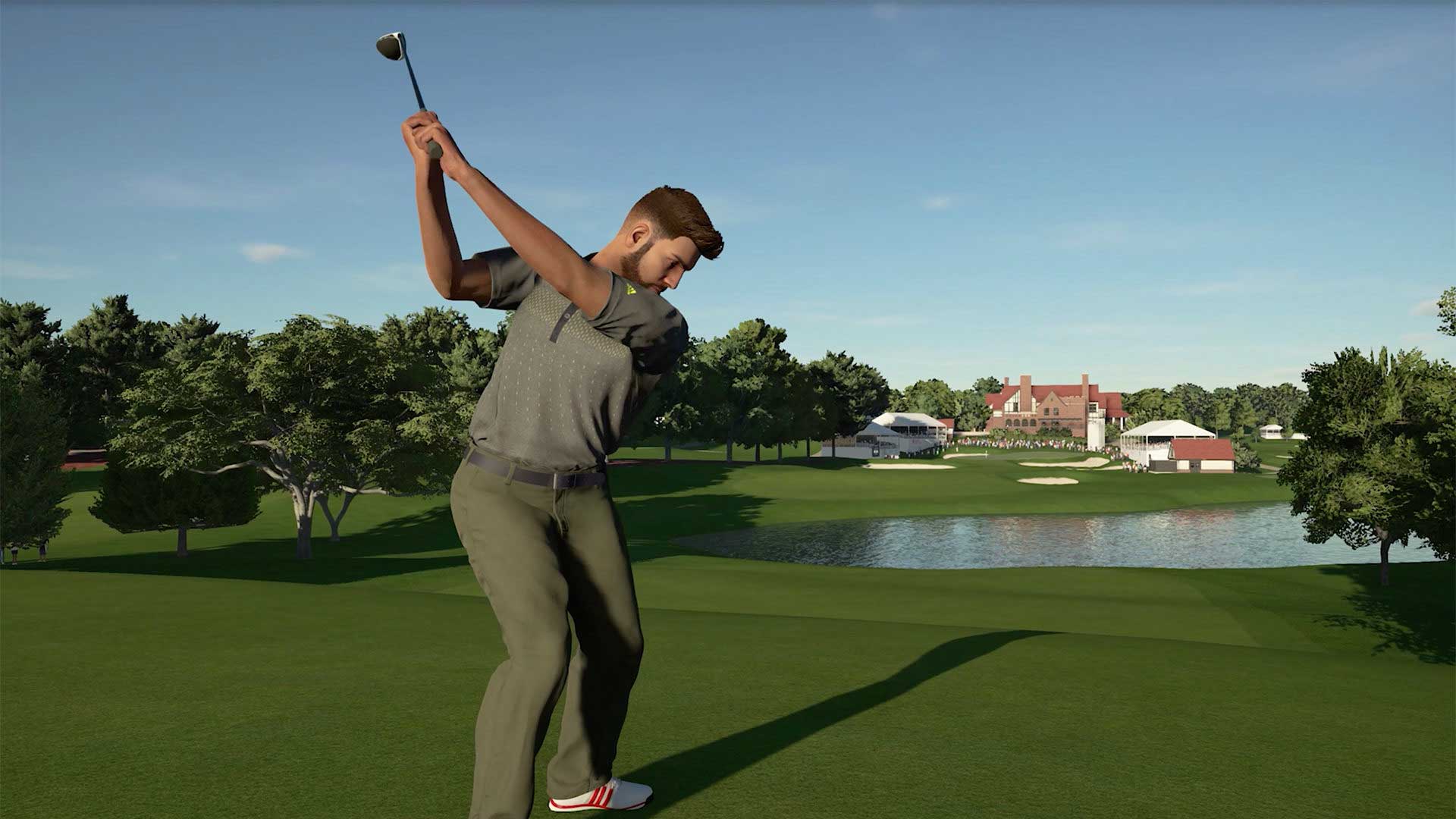 Wind speed requires that I shot in the opposite direction and the course layout meant I had to avoid bunkers, trees and water. It is your typical golf game and the various mechanics play into how well your round goes. When it comes to putting, this is a lot harder to master than I thought. Often, I would land right next to the hole only to overshoot the ball past it or sometimes the hill would get the better of me and I would stray off the path.

Thankfully, PGA TOUR 2K21 includes some fantastic accessibility features. I tried my hardest to master most of the game’s mechanics but where I struggled, I could easily enable more or less assist in that department when I needed to. You can even turn off mechanics such as the wind. In addition, one can make things harder by turning up the effect certain gameplay elements have on the game. Best of all, PGA TOUR 2K21 never feels as if you’re missing out on the game by being a complete noob. You still earn the same XP for challenges no matter how easy the settings are and the experience remains just as smooth. 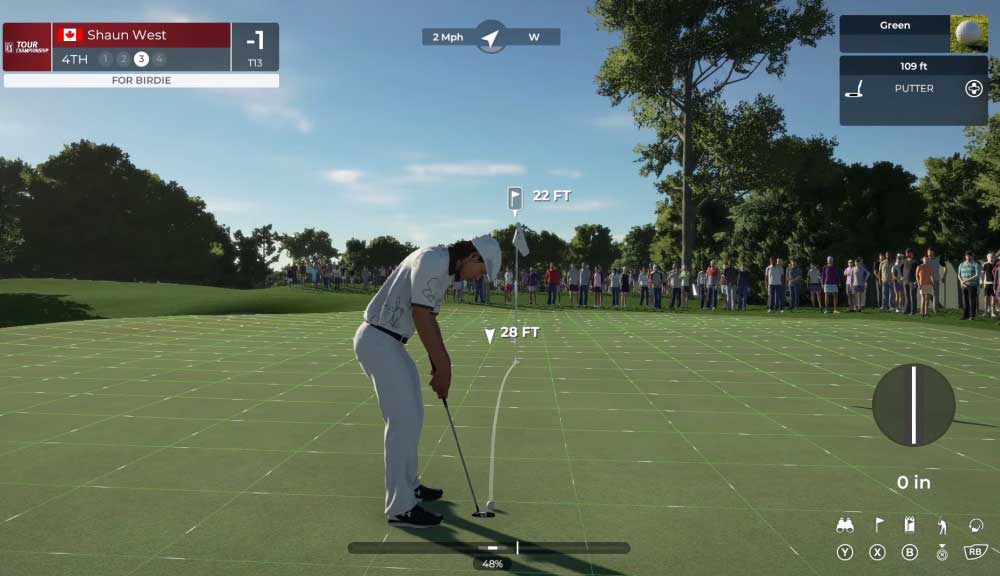 The avatar system allowed me to create a character, dress him and change my appearance using all the various items I unlocked through purchasing them with the currency I earned in-game. Other than a vast array of clothing items, you can’t change your avatar’s appearance such a hair, body tweaks and other physical ornaments. Sure, you can slap on a pink T-shirt but my character probably looked like everyone else given the game’s restricted roster of default characters.

The MyCareer mode is a great way to pass time. You can choose between one of four starting points at first. The Korn Ferry Tour, the Korn Ferry Tour Championship, Q-School, or the PGA Tour. Each of these tournaments includes a range of courses I had to compete in alongside dozens of other people. I really felt like I was starting right from the bottom of my career as I was a no one trying to at least qualify for a ticket to the next tournament. 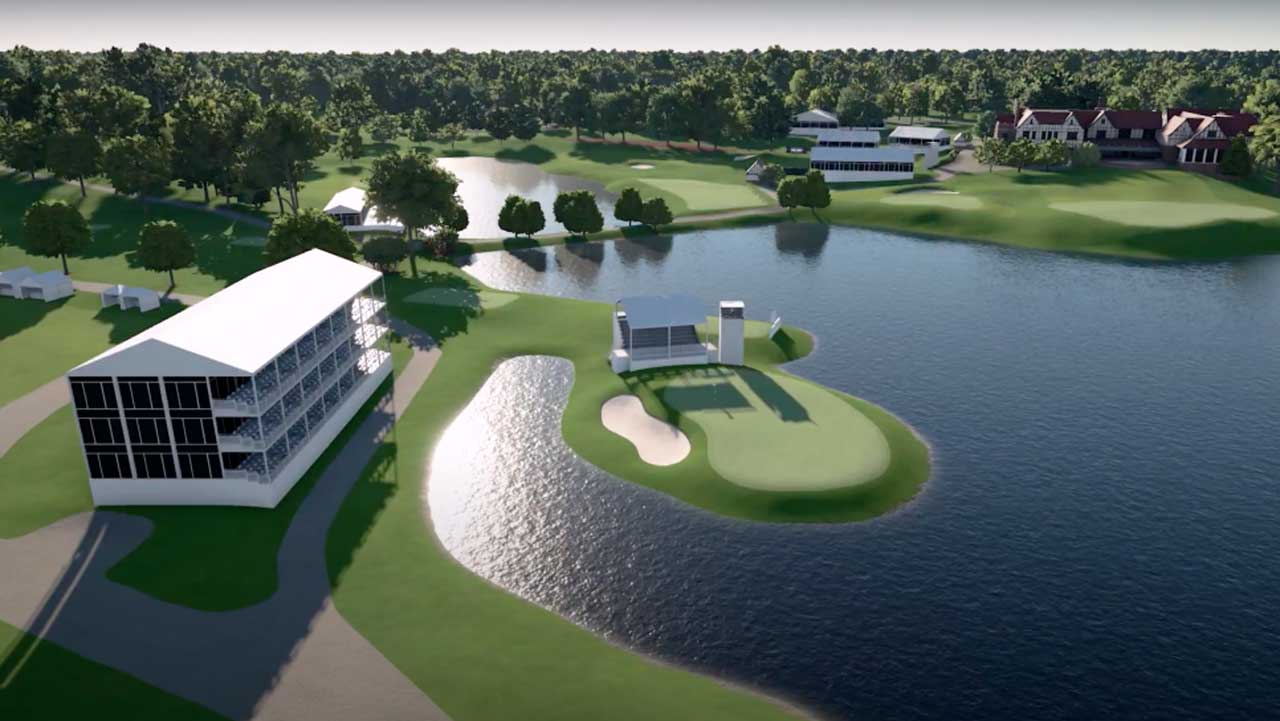 Throughout the career mode, I unlocked new items of clothing through my sponsor and bought new stuff using currency I earned for playing each tournament and completing challenges. I also went up against some of the pro players themselves including Matt Kuchar and others. Sure, the game is missing pro players such as Rory McIlroy and Tiger Woods but the list of in-game professionals is not bad at all. You can then take them on across the 15 courses throughout the game.

When it comes to multiplayer, it works well and there’s a robust list of modes and things I could do. One of which is Societies which let me create a community and invite friends to it. It acts as a personal gold club (not the stick) where players can compete in online tournaments and rack up a reputation for the Society. There’s also a quick play mode where I played a round of golf with a bunch of randoms. The same can be said for the quick play offline mode where it placed me on a course with AI and we spend the day in the digital sun. 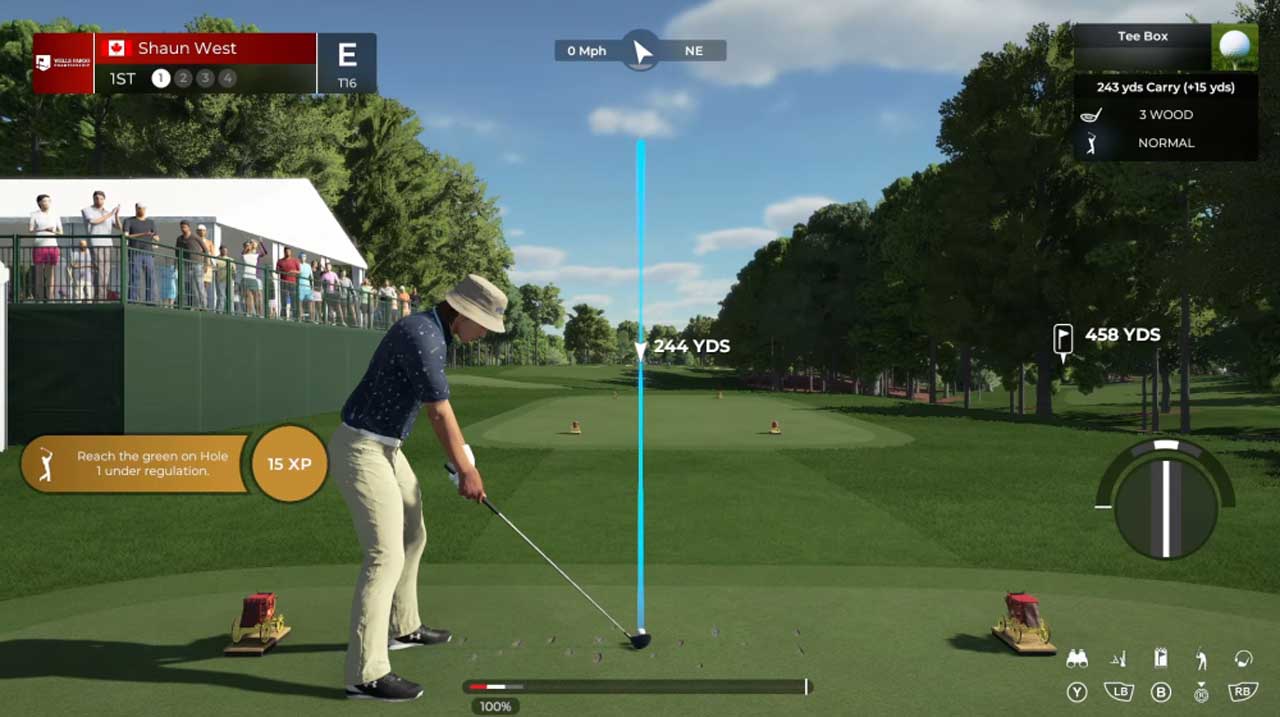 The course designer is also a great way to spend your time. Whether it is making your own course or playing someone else’s. There’s a lot to love here and the automatic course generator means after you are tired of the 15 courses includes in the game, you can just generate your own and play there. Sure, these may lack the polish of the pre-set versions but the content is content.

Lastly, we have presentation. PGA TOUR 2K21 looks okay. Sure, you’re not getting the best visuals on the planet but it works. Courses look decent and the draw distance gave me the feeling that I was stuck in the centre of a massive golf course. Sound design is also great with commentators poking fun at my bad shots and the sound effects of the objects drawing me into the experience even further.

Is PGA TOUR 2K21 the greatest game ever played? Not just yet. However, I am confident that HB studios is onto something here. The game is the new foundation for golf games to come for the next few years. It can only get better from here.

This PGA TOUR 2K21 review is based on a code sent to us by 2K Games.