I love a good old co-op shooter as much as the next person. However, given the bad track record of some PvEvP games on the market, Predator: Hunting Grounds had me worried. How long can a game keep you entertained after you have run around the same map a few dozen times? How much variety does it offer so it avoids dying like Evolve? Well, Predator: Hunting Grounds is fun most of the time. It is far from perfect, has some extremely long matchmaking times and a load of performance issues. However, underneath the jittering experience is a somewhat fun shooter.

Predator: Hunting Grounds sees players enter a jungle area map instructed to complete a series of objectives. Players are grouped together with other online people and one person takes the role of the infamous Predator. Sure, the best way to experience the game would be to run atop the jungle branches lurking over your opponents as the Predator, but I had equally the same amount of fun playing the Fireteam.

Every game plays out the same. If you are on the ground, you land, smudge yourself with mud to helo cover your tracks and head towards the objective. The map is fairly large with different drop points and objectives are equally spaced apart. These mindless “take this point and collect these items” never adds any excitement to the game at all. However, the real fun comes from knowing there’s another player lurking in the trees waiting to pounce on you and rip your spine out. As the Fireteam, your job is to kill dumb AI enemies and avoid or kill the Predator. 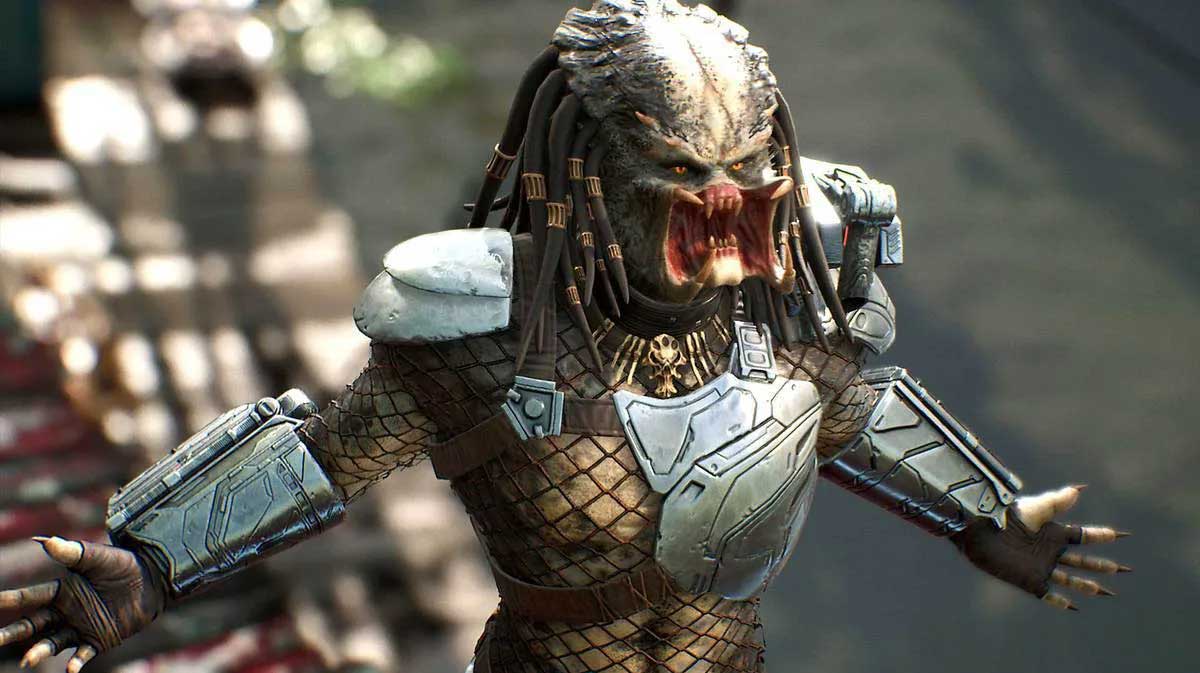 Variety is the Spice of Life

Often, matches never felt like they are going anywhere. The lack of objective variety often ruins the excitement. In turn, it gets all too familiar way too fast. With that being said, the game managed to keep me lobbying for longer than I thought. Smaller details like XP going towards both your Predator upgrades and Fireteam loadout helps make the grind a bit more enjoyable. You also need to play this with friends. It is a lonely and pretty mundane experience solo. My loud screams of panic and calling for help as the Predator was ripping me apart helped bring the party to life at times.

The real action starts when a player spots the Predator lurking above or below. Once spotted, everyone’s attention gets focused on the deadly player as he leaps through the trees or runs through the bushes to avoid the sight. Good Predator players managed to take us all down one by one by waiting for the best opportunity when each of us strayed off the path. Bad players died to our combined arms attacks when they got cheeky. Every match managed to deliver an exciting and intense experience. Moreso than I thought it would. Playing as the Predator is equally as daunting. This powerful alien creature can take players out as quick as they are spotted. He is able to leap towards enemies, slash them and even shoot powerful lasers from a distance. However, it is all about timing. Jumping down and attacking at the wrong time can mean your fate is sealed. Taking your time to assess the situation and read your opponent’s movements is much more fun.

On both sides of the game, you have loadouts and a progression tree that is vital to growing into the perfect Predator or Fireteam. The Predator is weak at first. However, during the review process, he was buffed making early builds easier to handle and more powerful. As you play through the matches, you unlock new weapons and perks. With that being said, the game still needs some more polish from a balance factor but it is better than it was at launch. There’s nothing worse than playing as the Predator and being killed by an overpowered sniper rifle and shotgun. It is a cheap way to die and often ruined the experience. 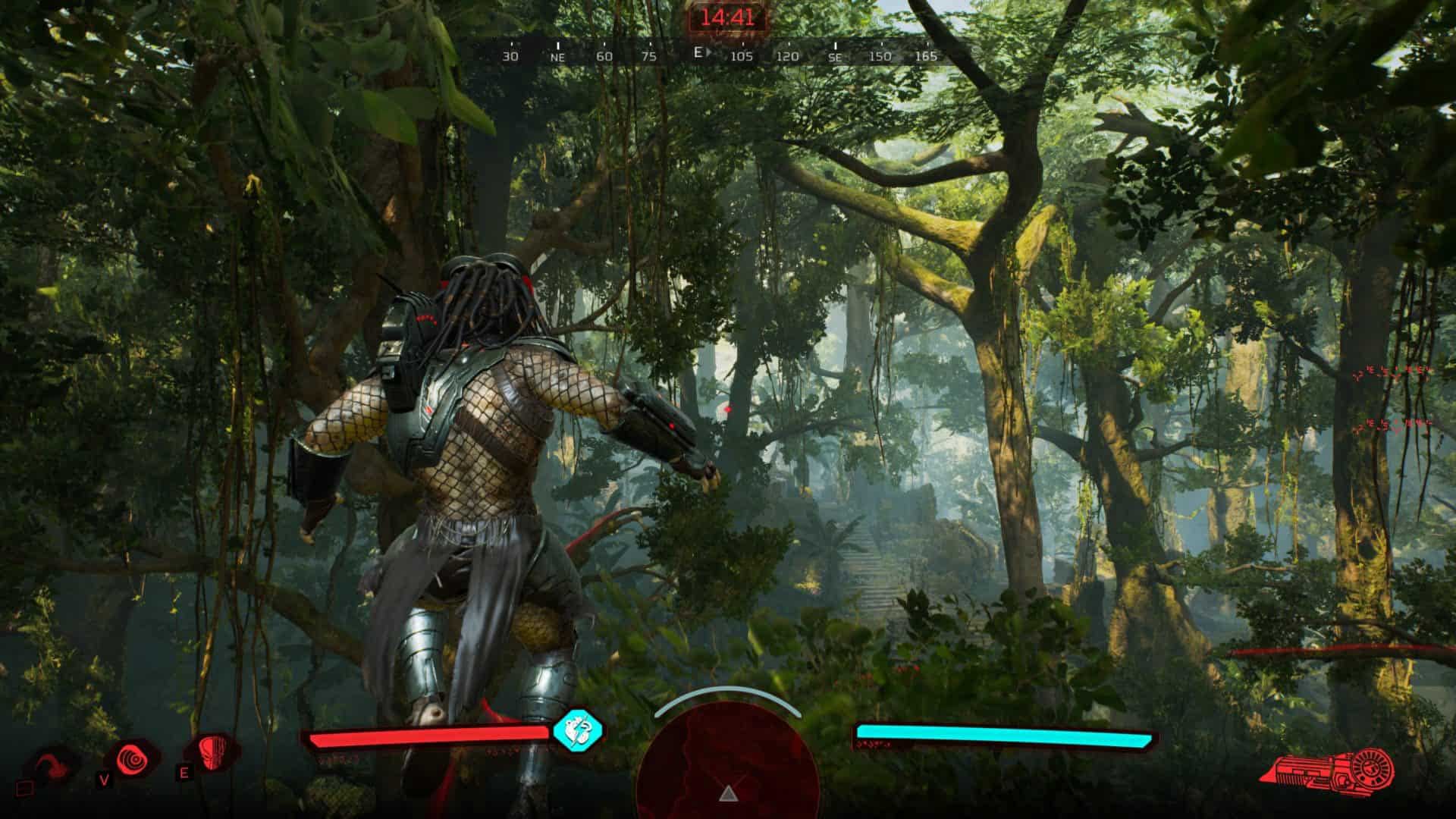 A game like this needs balance to keep things fair. It will take a while before the developers at IllFonic perfect the formula. However, small steps have already made things better.

I found fun playing as both the Fireteam and Predator. Guns, perks and abilities give you the edge. The Predator’s ability to see through a thermal lens, for example, made me feel like a badass. In addition, leaping through the level and going invisible felt great. The game is a great representation of the character. Equally as fun is the Fireteam. One has to listen for footsteps, thumps on the ground and at times even follow the glowing green blood the creature leaves behind after being wounded. The hunt never gets old no matter what side you play on.

Unfortunately, a lot of the game feels rushed at times. Players run through the area finishing objectives before you can explore. Every match felt as if we were racing against the clock. I could not help but feel that the whole experience would have been so much more immersive if it was a tad bit slower. Predator: Hunting Grounds is far from perfect. The game relies on progression to unlock loot boxes that contain cosmetic skins for characters, guns and the Predator. These are boring with nothing exciting to unlock that makes the grind worth it. A green pistol is far from visually appealing and a splash of red paint on my guy’s face looked very strange. We then have the performance issues on the PS4.  I played the game on the Pro and it was extremely jittery. Some scenes ran great at 60FPS while others bucked down to 20FPS and never stabilized again. Furthermore, this made playing as the Predator tough at times and harder to control him due to the wonky performance.

Then we have matchmaking which is a nightmare. A full party of friends often sat for 20 minutes before finding a Predator to play against. It was even worse when we were three players. We even went into matches with three Fireteam members instead of four at times. Why? I have no clue. Is it that no one is playing the game? Surely, the lobby could have added one more player into the match? 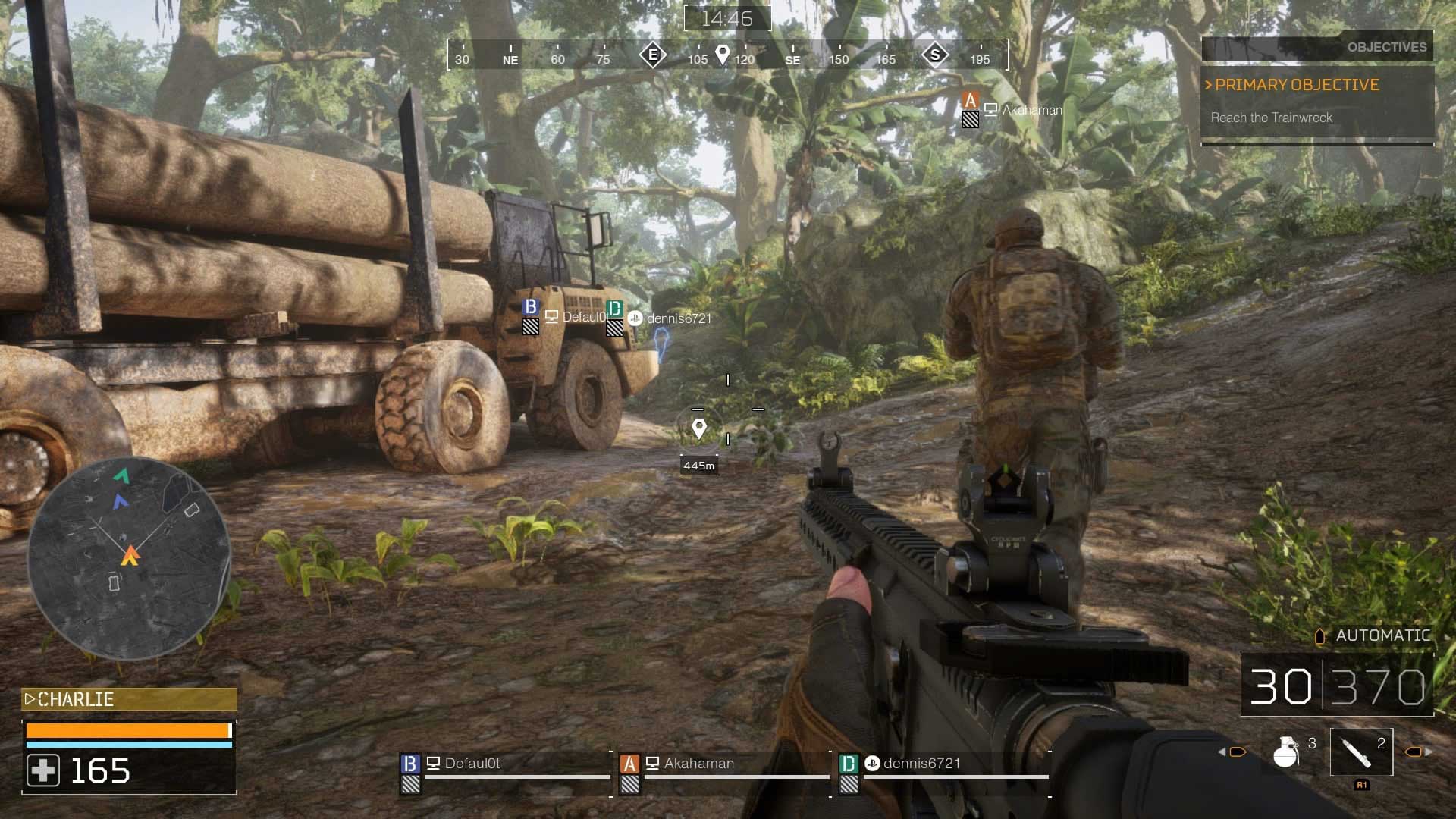 IllFonic has a lot of work to do on Predator: Hunting Grounds and they need to do it fast. A game like this relies on players and every long queue and buggy match gave me more reason to leave and never come back. From the performance issues to boring cosmetics, there’s nothing wow going on here. Underneath it all, there could be a decent game. However, it needs work. I had fun most of the time, but not enough fun to keep me interested for hours on end.

Predator: Hunting Grounds is far from the best shooter I have played this year. It has its fun moments. However, the package feels incomplete and like a “beta”. Long matchmaking makes it a chore, the boring cosmetics don’t make it worth the grind, and every match has some serious pacing issues.

This Predator: Hunting Grounds review was based on a code sent to us by SIE