The first Rage release was a technical marvel. Running on the PS3 and Xbox 360, the game pushed the hardware to the limits with high-res textures and fantastic character animations using the id-Tech 5 Engine. While its story was questionable, it was one of my most favourite games of last gen. I really hoped my Rage 2 review would praise the game, however, could it be one of my most hated of this gen as it is a giant step backwards. Its story is a snoozefest, its open world is bland and visually speaking, it is nothing to marvel at.

Bethesda dropped id Software in favour of Avalanche Studios, the same team behind Just Cause 4 and even used the same engine that powers the game, the Avalanche Engine. Rage 2 is a cluster of development choices that all accumulate into a game that gets boring within the first hour of playing. It has some fantastic gunplay but even that is padded with mundane characters, an empty open world to explore and a story that loses focus very quickly. 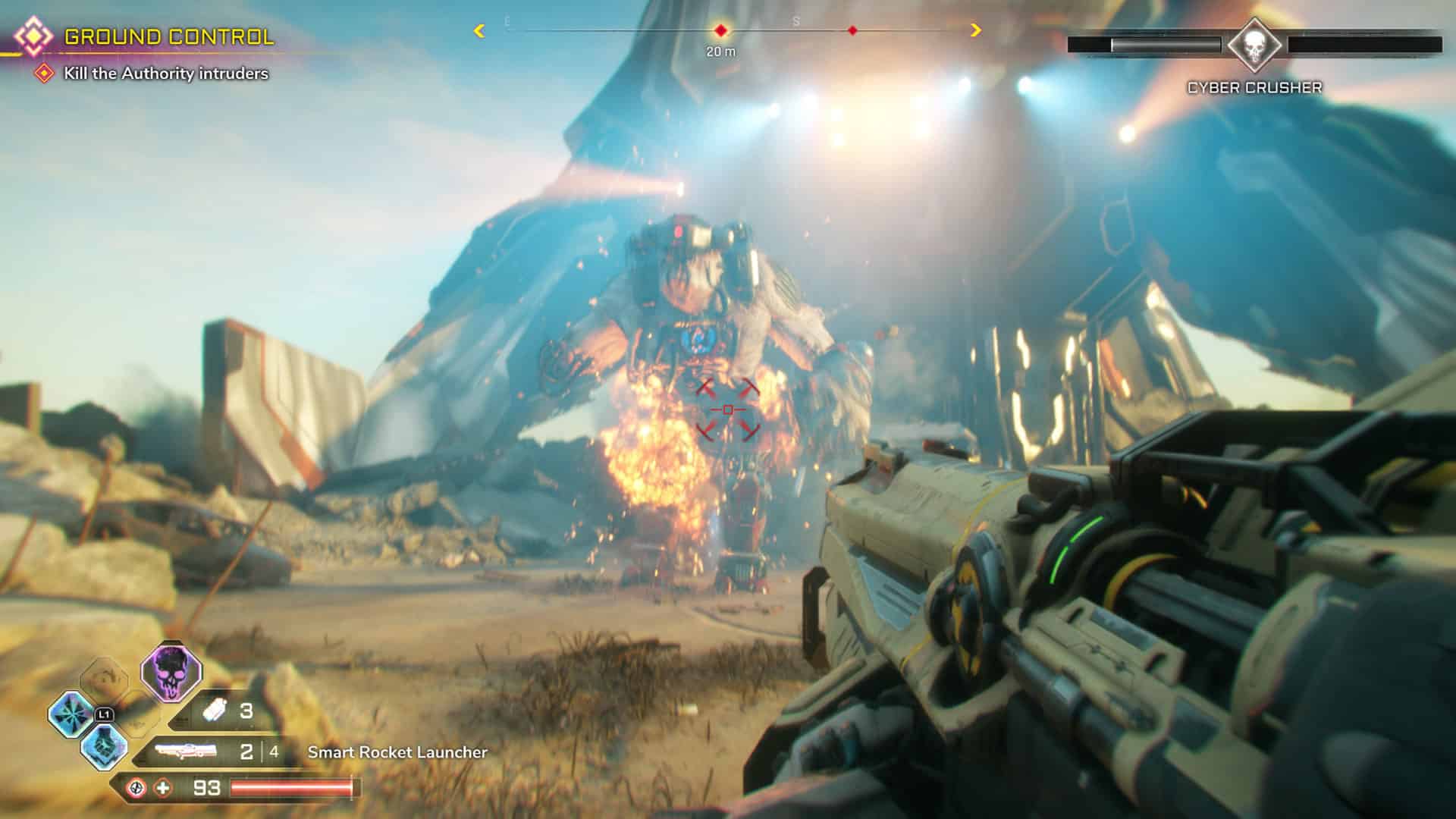 Rage 2 sees you take on the role of a Walker, the last of a Ranger who finds himself or herself in the middle of a world inhabited by mutants and a high-tech army called the Authority led by a Tyrant name General Martin Cross, a half man half cyborg mash-up. The world is filled with human wasteland factions as well as mutants that have been created due to the asteroid 99942 Apophis hitting it.

Much of the story revolves around you building up trust across three settlements as you take down outposts, race against rebels, kill giant mutated troll-like giants, and complete story missions every now and then when you reach a specific rank with each of the settlement’s leader.

The rest of the story is as average as it could get. It also does not help with the fact that my dialogue kept cutting out while speaking to people due to a bug so I had no idea what they were saying. This mainly happened right at the start when you learn everything you need to know about the game and the objective at hand. I just stood there for five minutes staring at a hologram of Lt. Prowley as she said nothing at all. 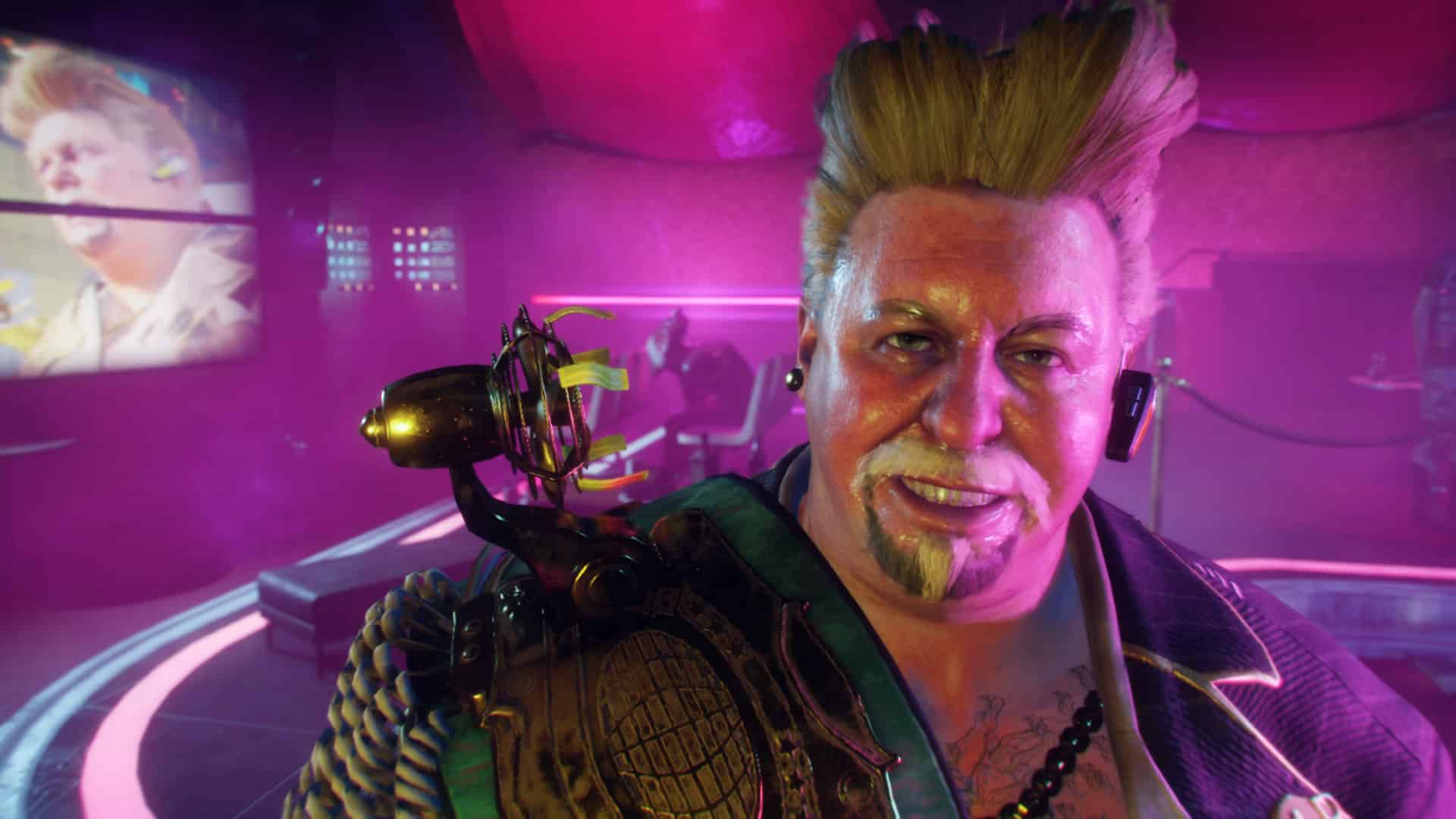 It was a bad start to the game that just got worse. Rage 2 tries very hard to keep things interesting but the characters, while some of them look cool like Klegg Clayton, an arrogant and rich property mogul and son of the past Mayor of Wellspring from the original game, they all just end up being one-dimensional. Dr. Kvasir is a crazed scientist who has lost the ability to walk and is now carried atop a mutant with his spinal cord fused together which results in some interesting cinematic moments, and Desdemonya Cold is an old TV star that is about to fall dead. 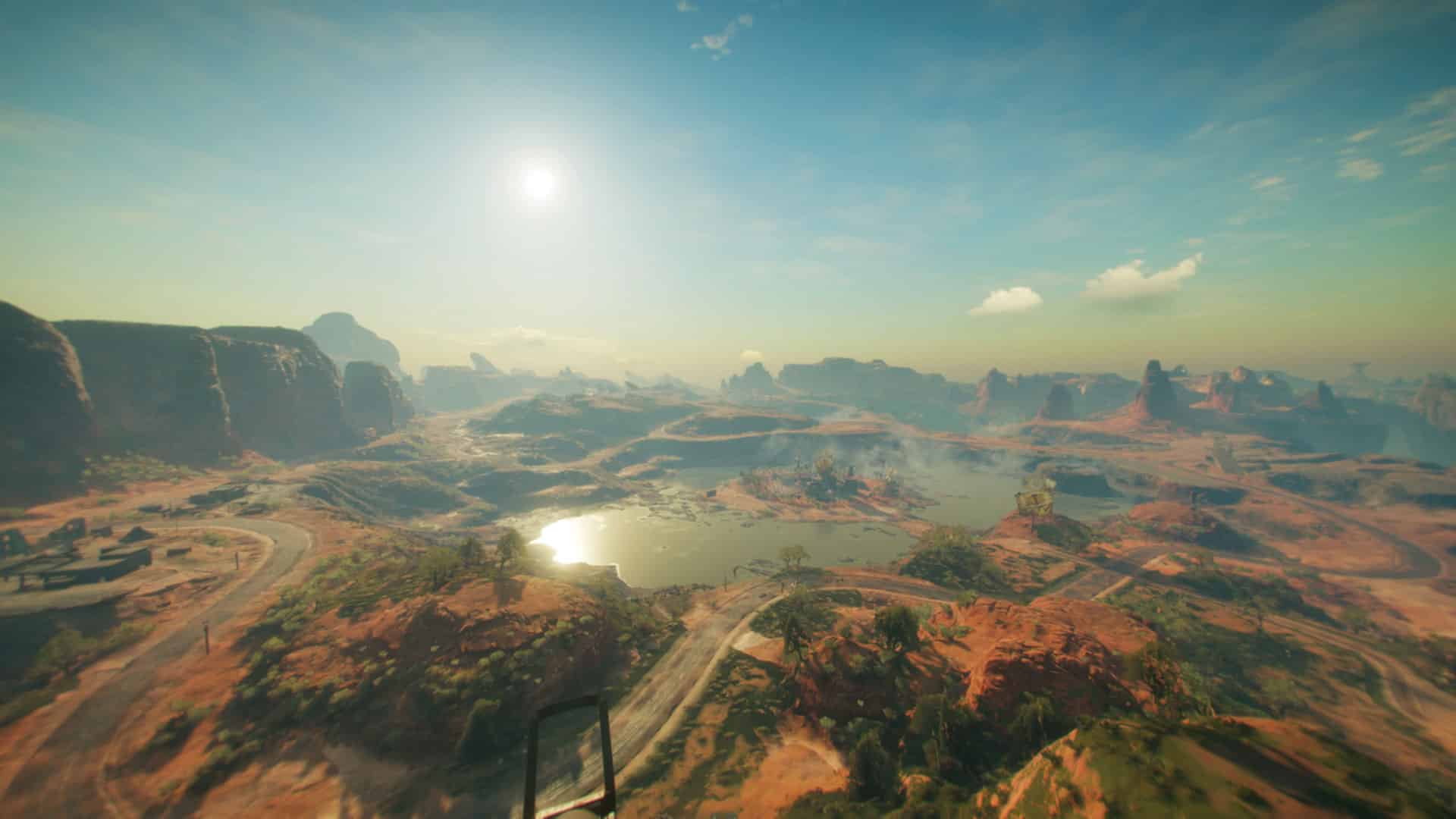 This selection of great characters is outweighed by the terrible supporting cast that all stand there with no motion and speak to you about happenings you should actually care about but don’t. It adds no charm to the game at all and ruins the story and any emotion the game is trying to deliver. After a couple of hours, I was just dual-screening Netflix on my iPad and playing the game on a low volume as I binge watched Dead to Me. 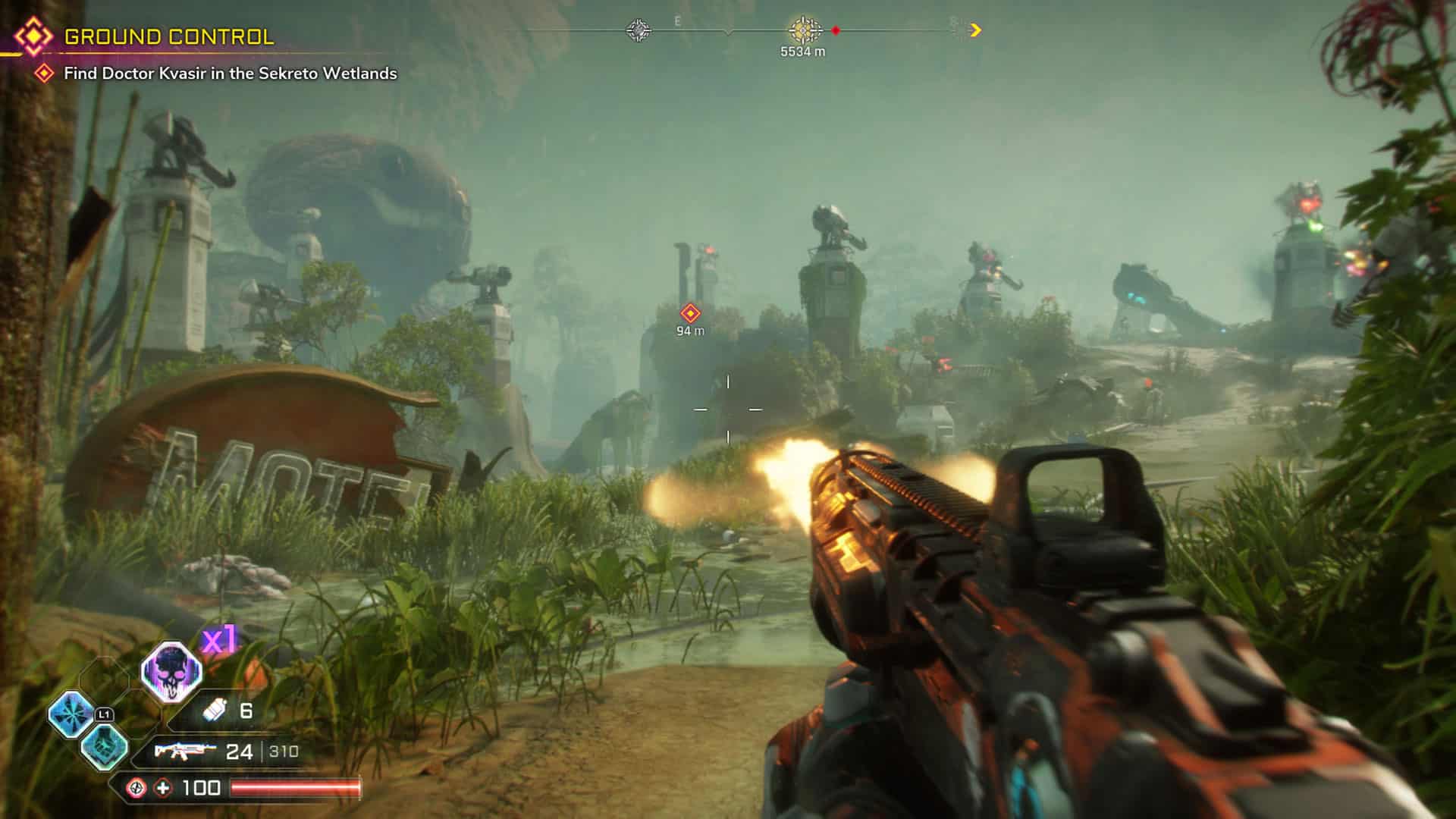 There is one aspect of Rage 2 that is fun – the gunplay which becomes mindless after a while, something that attracts me to shooting games. Rage 2 has no doubt been inspired by DOOM as the sheer speed and versatility of the gameplay has taken a page from id’s iconic shooter. The gore, the weapons, the abilities and how it all accumulates together to deliver a satisfying experience. Rage 2 has a set load out of different weapons. From an assault rifle to a rocket launcher to the iconic BFG which you never find ammo for. Most weapons also have a secondary firing mode like the rocket launcher that when aiming down sites, can target enemies and shoot tiny rockets at them. When you are not aiming down, it then shoots a standard powerful rocket.

The shotgun deals a powerful knockback shot when used aimed-down that deals little damage but can send enemies flying and a standard shot when used from the hip. These choices of gunplay make sense for each weapon as the hip fire often means you are taking quick shots and all the weapons that include alternate fire, makes sure to offer a great way to use them We then have the abilities which like the weapons are obtained throughout the game by tracking down Arks. These abilities give your player great advances in combat that add a layer of fun on top of the already-addictive gunplay. A ground pound lets you jump into the air and slam down on a group of enemies. The double jump lets you jump twice to reach higher ground and manoeuvre around the combat zone with ease and the dash lets you quickly dash in any direction to avoid incoming slams from enemies like the mutant troll-like giant.

These abilities and weapons are then upgradable by finding upgrade points in boxes around the game and purchasing tiers using Felrite which acts as the game’s currency. The double jump can be upgraded so you can jump and hover in the air for a few seconds as you shoot from above like an angel. The dash’s cooldown can be reduced and the slam can have a giant radius when fully upgraded.

The same goes for weapons which upgrade like the skills. Increased ammo, reload speed and even perks that reloads the entire shotgun in one second rather than you having to put each bullet into the magazine. After a few hours, you are much stronger thanks to all these new abilities and upgrades and combat is a completely different experience. These new perks help fight harder enemies such as the Authority that are armoured and pack quite a punch.

You can also upgrade your “Projects” that fall under all three settlements that help with overall gameplay additions too. Increased Felrite find, a tracker that helps track down boxes and collectable and even vehicle upgrades. The upgrade system works even if it is locked behind a purchase before needing something else to unlock it. Your character might be in a boring world on a quest that means nothing but at least the journey is made exciting thanks to these systems in place all backed up by great combat.

The world, while it looks great in trailers is not as fantastic as it seems. The wastelands are dull and empty, the visuals are dated and the lack of activities leaves you driving around in your car for hours on end and it gets boring very quickly. Sure, you can hoot at a travelling merchant to stop his car and purchase stuff but when you realize it is the same stock as the town were just at, you never do it again. Coming across a compound meant getting out the car, running in, killing everything or destroying gasoline tanks, trying to find boxes and moving on. It is the same rinse and repeat scenario every time with little to no variations. The main excitement comes from the Mutant Bash TV which is an over-the-top arena-like round-based shooting zone where you have to survive the onslaught of enemies while using specific weapons and dodging dangerous obstacles. It is fun and rewarding as you earn coins that can be used in the store. The game also has a series of races that make great use of the vehicles which are all as post-apocalyptic as ever.

These vehicles can be unlocked and upgraded just like the weapons and abilities. You can get new weapons for them, increase armour and speed. This comes in handy when you are using them to mow down enemies or chase down a fleet that travels across the lands. Some of the best moments in Rage 2 came from these chases as they are explosive, intense and rely on quick movement and upgraded weaponry.

Rage 2’s gunplay is fun but that is about it. While you are not shooting things, it can be a drag to play through and even after a while, the action gets tiring and I just wanted it to end. The world is lacking excitement, the characters are bland and the combination of it all just left me underwhelmed. id Software should have worked on this game and improved on everything that made the first one so great. Instead, we have had a giant step backwards.