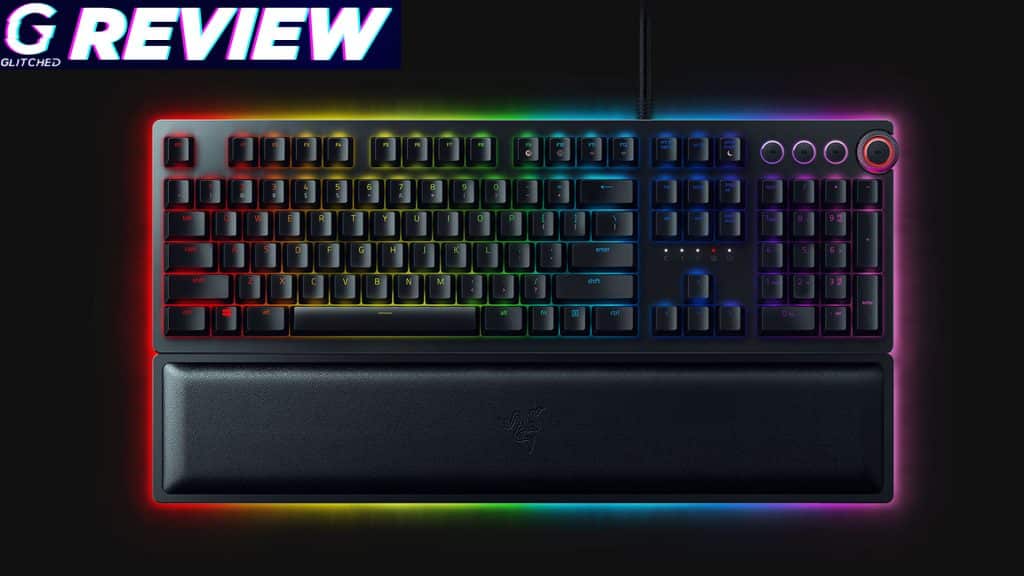 The Razer Huntsman Elite is the latest offering from the gaming accessory brand that goes hand-in-hand with the new revamped Razer Central software and new optical switches. It has a lot going on for it. A media switch collection, a fantastic wrist rest and of course all the RBG you could ever ask for. Most importantly though, it is as satisfying as ever to type on and one of the most comfortable keyboards I have ever used…. ever.

While it may be the loudest I have worked on, its keyboard and “Opto-Mechanical” switches create a new experience right from the start. What is an “Opto-Mechanical’ keyboard you may ask yourself? Well, it is a blend between optical switches and mechanical parts. Yes, it costs a fortune and the Razer Huntsman Elite is probably one of the most overpriced keyboards on the market but it hopefully is acting as a glimpse at the future of gaming keyboards.

In short, the Razer Huntsman Elite is a full-sized keyboard with not a lot changing in the design department. At first, I thought it could have been a BlackWidow as it bears quite a lot of resemblance to Razer’s other lineup. A giant metal backing supports the raised keycaps and the top right-hand corner features a full set of dedicated media keys that glow.

The volume dial has a circular cutout trim that pulses whatever RGB preset you are using, and the volume/next track buttons slightly glow from the bottom. It is a step in the right direction but my only issue is that these buttons should have been backlit too like the rest of the keyboard.

The controls instead have black text on them so you cannot see what you are pressing. It takes a while to get used to where they are due to them being so darn dark. Why not just make them like the rest of the keys?

The volume dial is great though. Turning it to the left decreases volume and to the right increases it. It has a satisfying clicker sound while you turn it and pressing the button mutes the volume completely. While the dedicated media keys are not perfect, it is a massive step in the right direction and better than having to use shortcuts.

The rest of the keyboard is made up of the keys which we will get to in a bit. The most important part of the design is the wrist rest which is now RGB lit around the trim and looks pretty sleek. The rest is padded with a Razer logo smack bang in the middle and the entire thing separates from the main keyboard. It has a strip of conductors that magnetically connects to the keyboard and powers the lights. Of course, you need two USB slots to power the entire device. One is for the keyboard and the other for the wrist rest.

The design of the padded wrist rest works well. The strip perfectly lines up with the same strip on the main keyboard and when you have your lighting setting right, it flows perfectly across the two. It is pretty to look at and the glow reflecting off my desk was satisfying to watch. There is one issue though, the strip of RGB is hidden away a bit due to the top of the keyboard and padded rest jutting out a bit. It would have been great to have it all flush against the strip so it was visible without you having to actually bend your neck to look at it.

So the keys are new. These “Opto-Mechanical” switches are a combination of optical switches with a mechanical feel. The keys have a “U-like” design on top that gives it better traction for your fingers. But it is all about the speed of the keys and the Opto-Mechanical switches are the fastest I have ever used. Razer claims the keys travel at the speed of light and they are pretty much on point with that statement. Each key claims to have a laser beam in it and as you press down, the light travels across the underbelly, to a sensor and signals the key press. 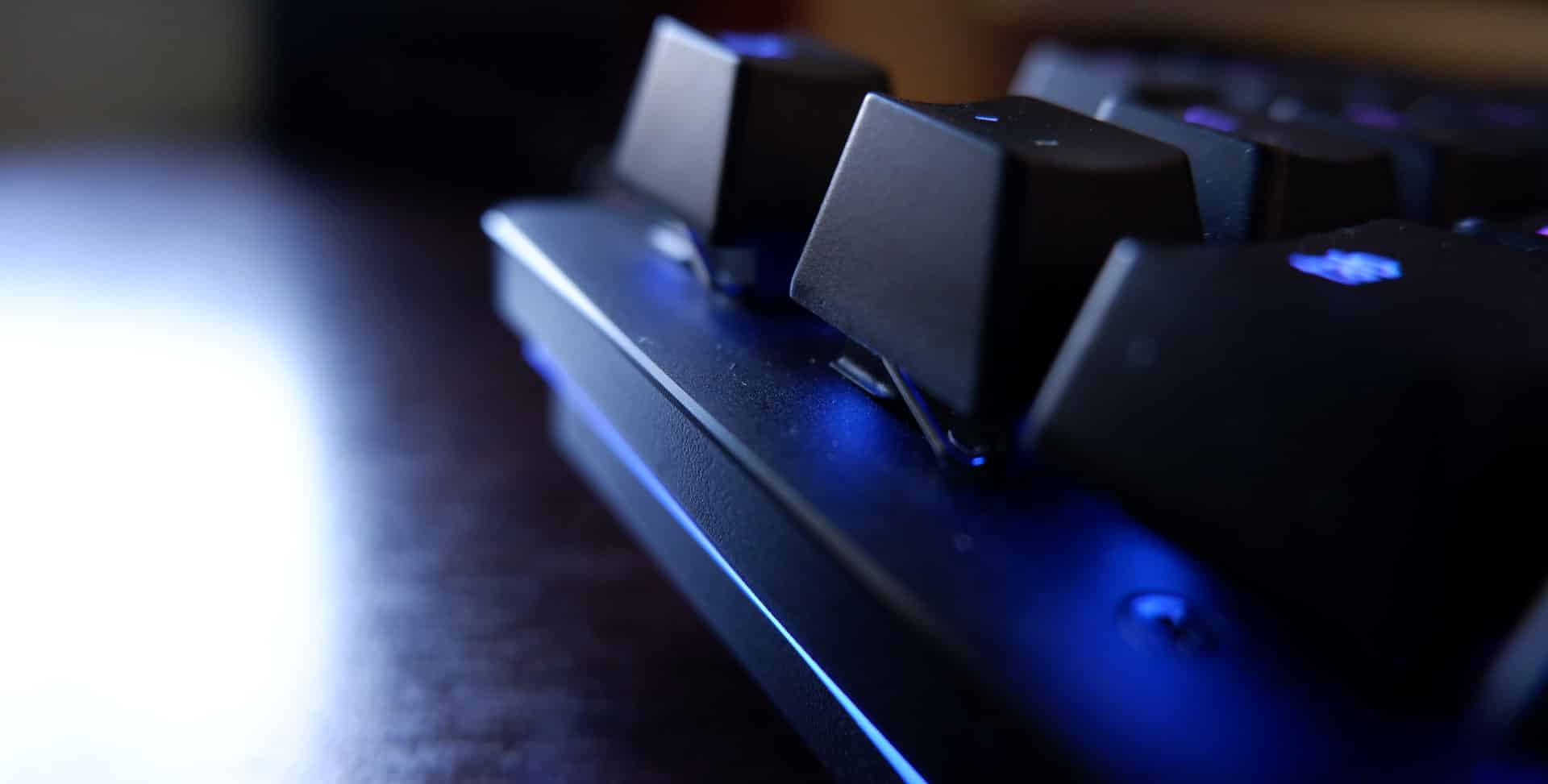 This is some proper revolutionary hardware going on here and the feeling is like no other keyboard I have ever used before. Razer claims the technology delivers a 30% faster keypress than any other device on the market and the keys have zero debounce delay. While other keys travel 2.0mm – 2.2mm, the Opto-Mechanical keys travel only 1.5mm with 45g of actuation force compared to 50g-60g found on other devices.

In short, key presses are extremely light and clicky and super, super fast and tactile. All this results in an extremely satisfying experience with everything I did. I typed faster, gamed better and it was fantastic. While louder than any other keyboard I have reviewed, the noise was a small sacrifice I made for the wonderful experience it delivered in other ways. When I say loud, they are very loud and the pitch is also very different from any other keyboard on the market. Instead of a deeper and lower sound, the Opto-Mechanical keys deliver a sharper and more striking sound.

Yes, it beats other switches on the market when it comes to everything it does. Gaming is damn fast thanks to the millimetres of difference between the travel time. Will it change your life? Probably not and you won’t lose games because of the speed difference but this is no doubt the most innovative way to experience a gaming keyboard ever.

We then have the price tag and yes, the Razer Huntsman Elite is pricey as all hell. You will pay around R4,000 for this “revolutionary” device and to put that into perspective, I just bought an Apple iPad Pro Folio Keyboard for the same price. Yes, an Apple product is the same price as this keyboard. It is expensive and not something you will consider unless you are really treating yourself.

This keyboard is above and beyond most devices on the market but its price tag is too. If money is no object then go for it but you could probably get a BlackWidow for less and have a better RGB experience and live without the new Opto-Mechanical keys until they get cheaper in the future.