ReadySet Heroes is a new party game where dungeon crawling clashes with PvP from developer Robot Entertainment, known for their addictive Orcs Must Die! and published by Sony Interactive Entertainment. At first glance, the game’s charming characters and cartoonish art style looks fantastic and pulled me in. However, after playing the game for several hours, it just felt a little like a missed opportunity.

RELATED: Concrete Genie Review – Paint Me Like a French Genie

Check out the launch trailer below that shows some gameplay and introduces the cute heroes. Find the rest of our ReadySet Heroes Review below.

ReadySet Heroes is the first game where I went back to the main menu several times to see if there isn’t some mode that I might have overlooked. You see, ReadySet Heroes has only two modes, one where you have to play online in the form of a Cavern Brawl. In this mode, you and up to three other players start off on your own and try to get as much loot and power for your character as possible before the time runs out. Then, you are transported to an arena where you face off in a deathmatch.

The other mode is more of a single-player or couch co-op experience, where you and a friend make your way through 30 levels of a dungeon, fighting bosses, avoiding traps and collecting loot of various qualities from common to legendary. The dungeons are random so every experience is a bit different, but that’s all there is to ReadySet Heroes. 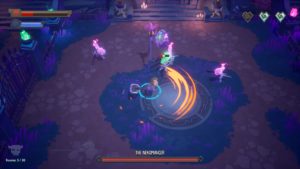 That’s why it feels like a missed opportunity from developer Robot Entertainment, as a story mode or anything resembling some great lore for the 10 characters could have done wonders for the game. Speaking about the characters, you start off with six but as you progress throughout the game, you can unlock an additional four.

The issue here is that the characters don’t really offer much in terms of gameplay variety. Sure, some of their stats are slightly different, but you don’t have specific abilities or skills. Instead, what you can do with your character is determined by what you pick up from chests at the end of each level. For example, with an axe, you will get a spinning attack to use, while with a guitar-like item, you can put enemies to sleep. 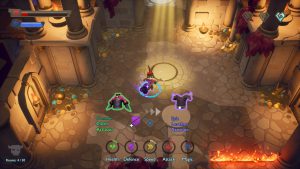 Then, you have magic and throwable items like a boomerang. I loved the Firewall spell which I picked up in a chest that allowed me to block off paths during the PvP portion of the game. You also have some armour to put on that with increase your character’s stats and just about everything drops shiny shards that increase the stats of your character as you make your way through the levels. It’s great fun to stumble upon a treasure room for the first time but even that gets old relatively quickly. 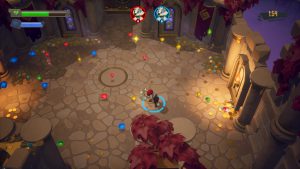 Avoiding traps and trying to make your way through a dungeon faster than your opponents remained fun and every game everyone starts fresh with no advantage, making for a nice competitive experience.

These bosses offer some challenge and are quite awesome, unique and fun to encounter.

The game is meant to be played with others but if you don’t have someone sitting next to you with another controller ready for some Tower Crawl. Taking it on solo isn’t a fun experience as the bosses are meant to be tackled by two players. These bosses offer some challenge and are quite awesome, unique and fun to encounter. For example, The Nekomancer who spawns in a graveyard and where you have to pick up skulls and drop them in objects, dodge attacks and take care of his minions. 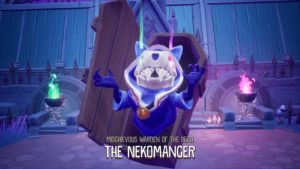 The thing is, if you don’t have a friend and another controller, this game mode will be quite boring and frustrating, which brings me to the multiplayer aspect of the game. Playing ReadySet Heroes from South Africa isn’t all that great as there are freezes and a lot of lag. This made it almost impossible to compete against others online for me as the game’s net coding simply isn’t good enough. I play games like Overwatch, Diablo III, Dauntless and much more and sure, there is a delay from South Africa but the game’s don’t freeze and characters don’t rubber-band around. The same can not be said for ReadySet Heroes. Furthermore, I had to wait between 5 and 20 minutes for a match and when I found one, it was always just against one other player and not three others. 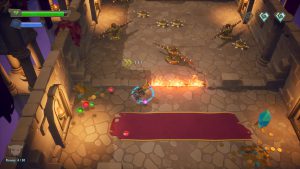 The game’s graphics look great and I really loved the cartoonish style, the furry and loveable characters as well as the different levels which were all brought to life by amazing lighting and a smooth FPS experience. However, the game isn’t technically perfect as some challenges seem to be bugged, from having to finish a brawl with 1000 Magic to feeding snails 15 berries, these challenges didn’t properly register as completed.

This makes things a bit frustrating as the challenges could have kept me busy for longer if they just registered upon completion. However, I am sure the developer will fix this issue. What I really want to see is more free content being added over time and balancing the game with some random dungeons that are catered towards the solo player. 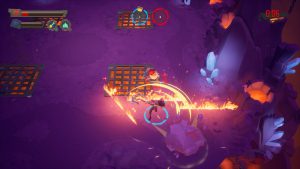 Yes, this is a party game but it does offer a solo mode and playing the game from South Africa via online matchmaking just doesn’t work as well.

ReadySet Heroes is a charming party game that throws some nice challenges at you in the form of boss fights and traps, with cute characters and flair. However, the game lacks a lot of depth both in character gameplay diversity and modes. It feels like a missed opportunity for developer Robot Entertainment and Sony Interactive Entertainment as the game would have been awesome with a story mode, especially with all the cool environments and interesting little heroes.

While technically solid in the graphics and sound department, the multiplayer experience from South Africa is also a letdown as there is a lot of lag and even some freezes. As a party game, however, it is nice to play with friends on the couch but the game definitely lacks content right now. For the asking price, however, ReadySet Heroes might be a title to look at if you want a new party game to enjoy for an hour or two at a time.