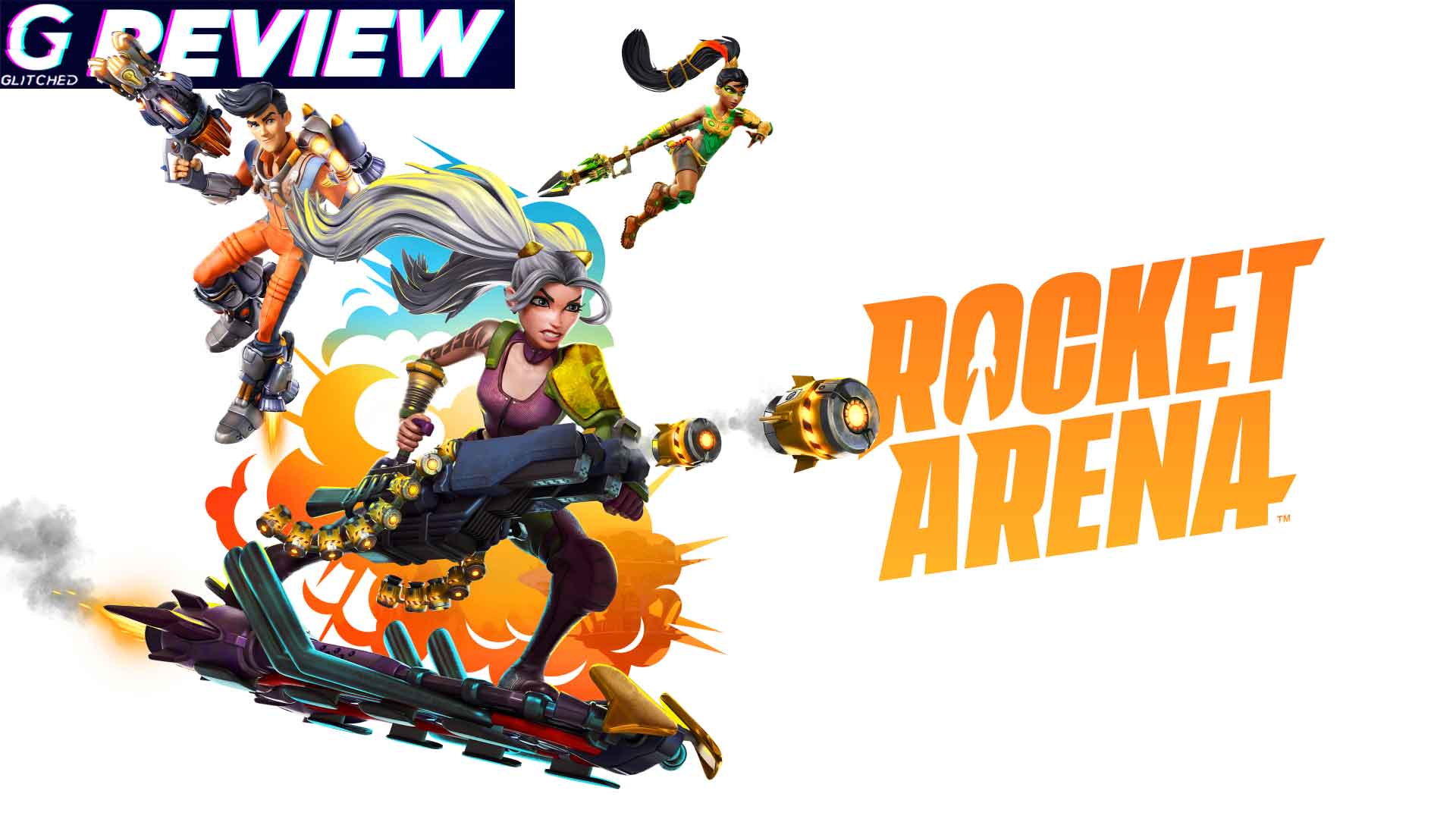 Rocket Arena may have a tough time proving itself in an oversaturated PvP market. However, as someone who stays away from overly-competitive multiplayer games, the game delivered a fun and arcade-like approach which made it a breath of fresh air. There’s honestly nothing else like it on the market. It is a 3v3 PvP rocket launching pile of madness as three unique heroes enter an arena to take another team in various modes. Its biggest selling point is that the game delivers these charming heroes each with their own unique abilities which are easy to play but tough to master. We are talking about Overwatch-level playstyles here as each hero brings something different to the table. In addition, the gameplay feels great as the various modes delivered different approaches for each hero. Not to mention the fast-paced gameplay leaves you on your toes as you are forced to adapt to your opponent, the mode and every situation the combination throws at you.

This Rocket Arena review was conducted over a special virtual review event where we spent 6 hours playing the game and getting an extensive look at the gameplay, modes and characters. We hope to conduct another review of this game by the end of the year after the free content and modes have released.

Check out our Rocket Arena video review down below

At launch, Rocket Arena includes 10 heroes, four game modes and 10 maps. Final Strike Games plan on bringing more content to the game soon after launch with new maps, modes and heroes being added every season. However, as it stands at launch, there’s enough variety to keep things fresh. From my time with the game, there’s a lot to digest. Each game mode delivers a fun way to approach the match and with the addition of unique characters, it makes it even more enjoyable.

A typical Rocket Arena match revolves around completing the said objective and knocking players out of the arena. Ever played Super Smash Bros? Well, the mechanic is the same here. Deal enough damage to a player and a bar fills up, once the bar is full they can be shot out of the arena and die. This is called a Megablast. Different attacks increase the Megablast bar more and characters can combine their abilities in order to deal a mass amount of damage instantly knocking them out even on half a bar. It is a simple combat system but with the maps and character abilities, it keeps you on your toes as you need to counter your opponent, never stop moving and know when it is time to back off and heal. 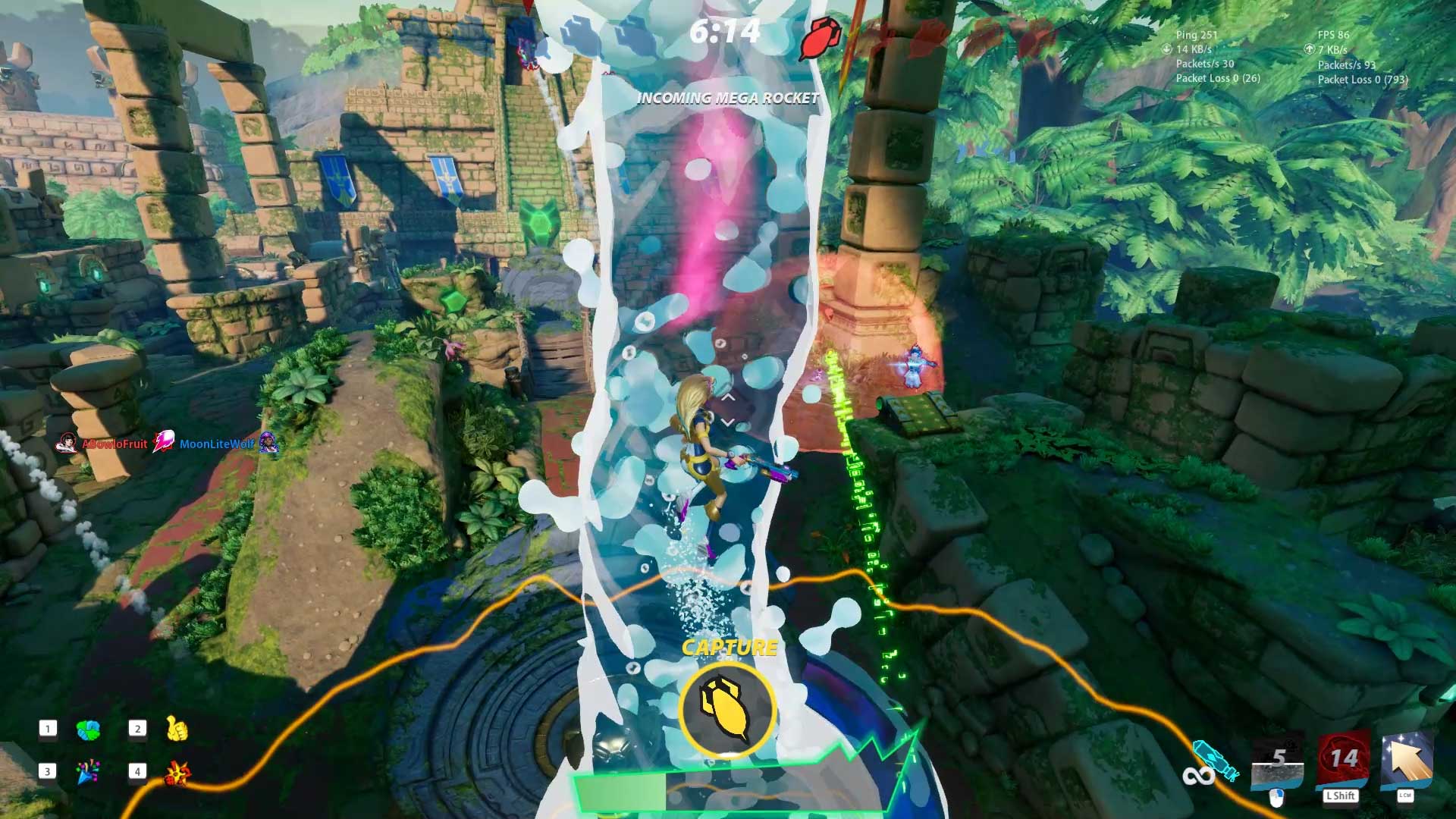 Every map has been cleverly designed to incorporate low, mid and high structure tiers to suit each character. Some characters such as Topnotch can use his jetpack to fly into the air while others like Blastbeard can only jump a few times. With that being said, each character has enough breathing room to move about as ease and dodge, double jump and moreover as you see fit. Yes, some are slower than others but the maps have been built around this.

Each map is a stunning display of craftsmanship and has been built with great attention to detail. Apogee Acres is an open-area map with a tight fighting centre. The Golden Zephyr is a massive floating skyship with lots of room to mess up and fall off the edges. Megadon Canyon includes some wide-open areas as well as some tight corridors where players and sneak in and knock you out. Temples of Jaaqua features annoying broken Aztec pillars all over the map which often get in the way of your fire line. It is also important to note that maps are also interactive and hold hidden mechanics if you shoot specific parts of them. Temples of Jaaqua, for example, has a giant panther head that shoots missiles at players when a player shoots a trap switch hidden in the map. Shimmering Depths includes water jets that shoot out from the ground which players can use to fly into the air. 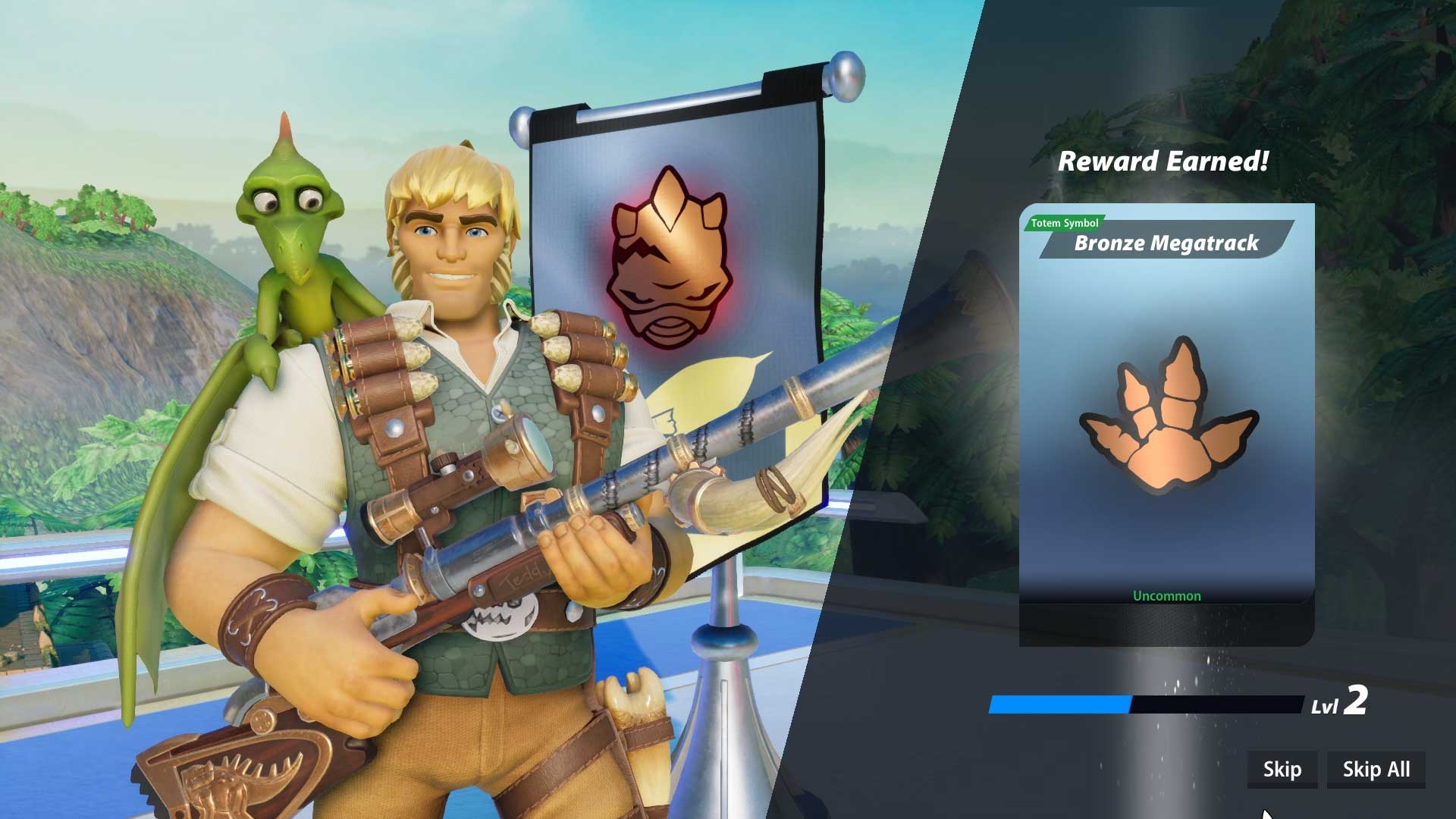 The maps are extremely well put together and make every match enjoyable. Sure, you will probably miss the secret mechanics with all the chaos going on around you but when you find them, it makes it worthwhile.

Combine these maps with the fantastic roster of heroes and you have yourself a great PvP brawler. Rocket Arena’s 10 launch heroes are extremely fun to play and suit all sorts of playstyles. As you enter each match, you get so select one to control. Players cannot switch out during the match either so it is important you decide on your favourite correctly. Every hero combines a unique set of skills that makes them feel completely different from the other. I would not go as far as to say these characters have their own roles but they do fit into specific playstyles. Looking for a long-ranged character then Boone is your guy with a Magdon Scope that can shoot from long distances. If players get too close to Boone, he can then use his Zik’z Vortex ability to gust himself away from them pushing them in the opposite direction at the same time. 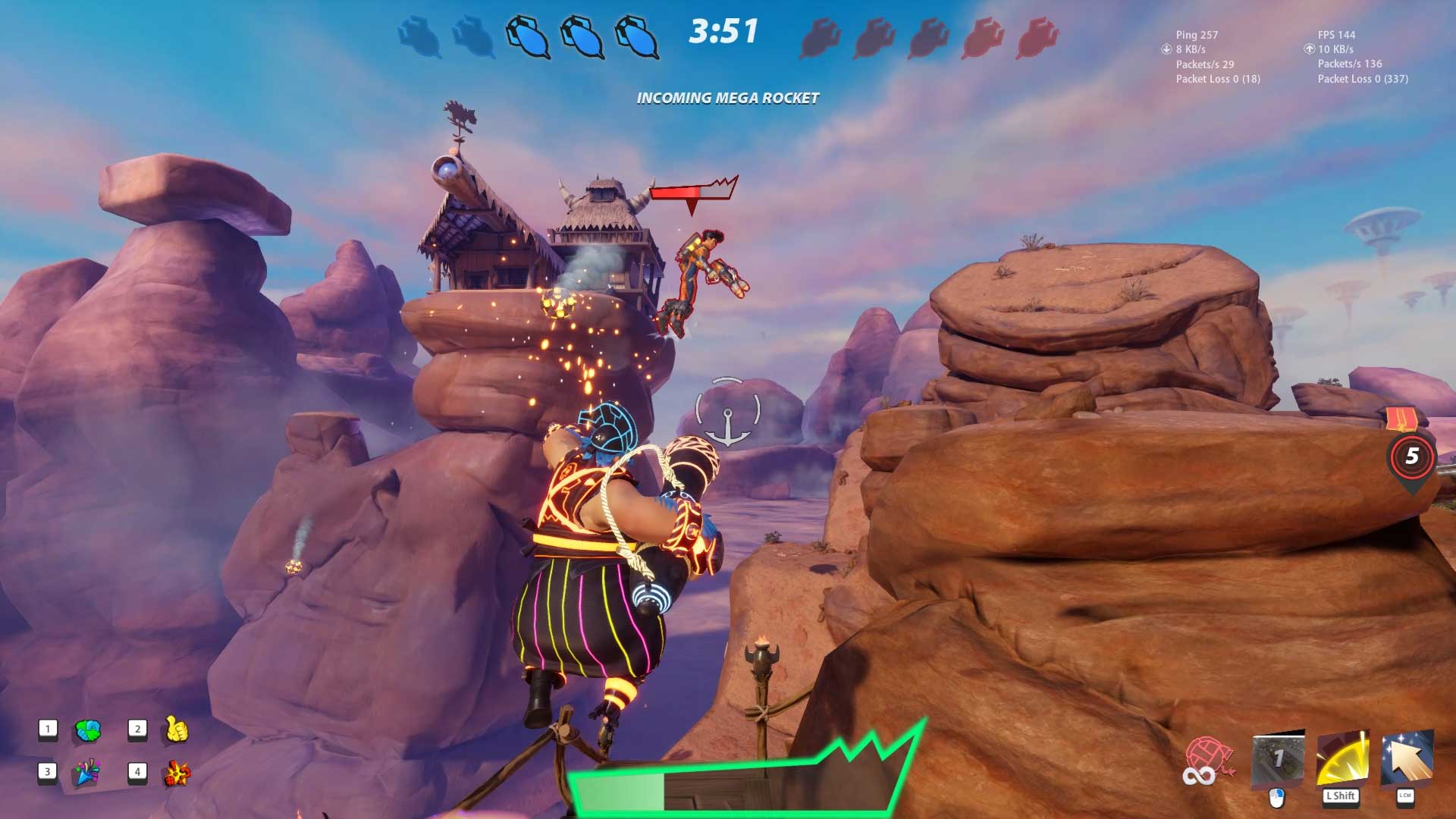 Mysteen is a squishy close combat character that can clone herself in two and switch between the double. She can also use a Mirror Shield attack to block incoming damage and her primary attack fires a 3-round burst on her third shot. Blastbeard, my favourite character is a tanky guy and the hardest hero to Megablast. His shockwave ability, which is a little overpowered at launch, knocks nearby enemies back, deals damage and knocks incoming rockets away too. I won’t go into detail about every character available but just know that when jumping into the game for the first time, it was extremely enjoyable to meet these characters, learn their backgrounds and attempt to master their playstyle. These characters have been put together with a lot of love and attention and you can see this from not only their appearance but their abilities and how well they handle.

When it comes to modes, there’s a lot to offer here at launch. Them game includes a Ranked mode at launch in addition to the other fun and exciting game modes. Mega Rocket sees a giant rocket land in the arena. Players need to capture it and defend the zone to score. Treasure Hunt tasked me to hold the spawned treasure chest for as long as possible and then run around picking up coins around the map while a Mario-like song played. Keep in mind, that other players were fighting for the chest and coins making it an exhilarating race.  Knockout is a classic competitive mode where players need to use all their abilities and rockets to blast their opponents out of the arena. Lastly, there’s Rocketball where two teams need to pick up a ball and score it into the opposing team’s goal. 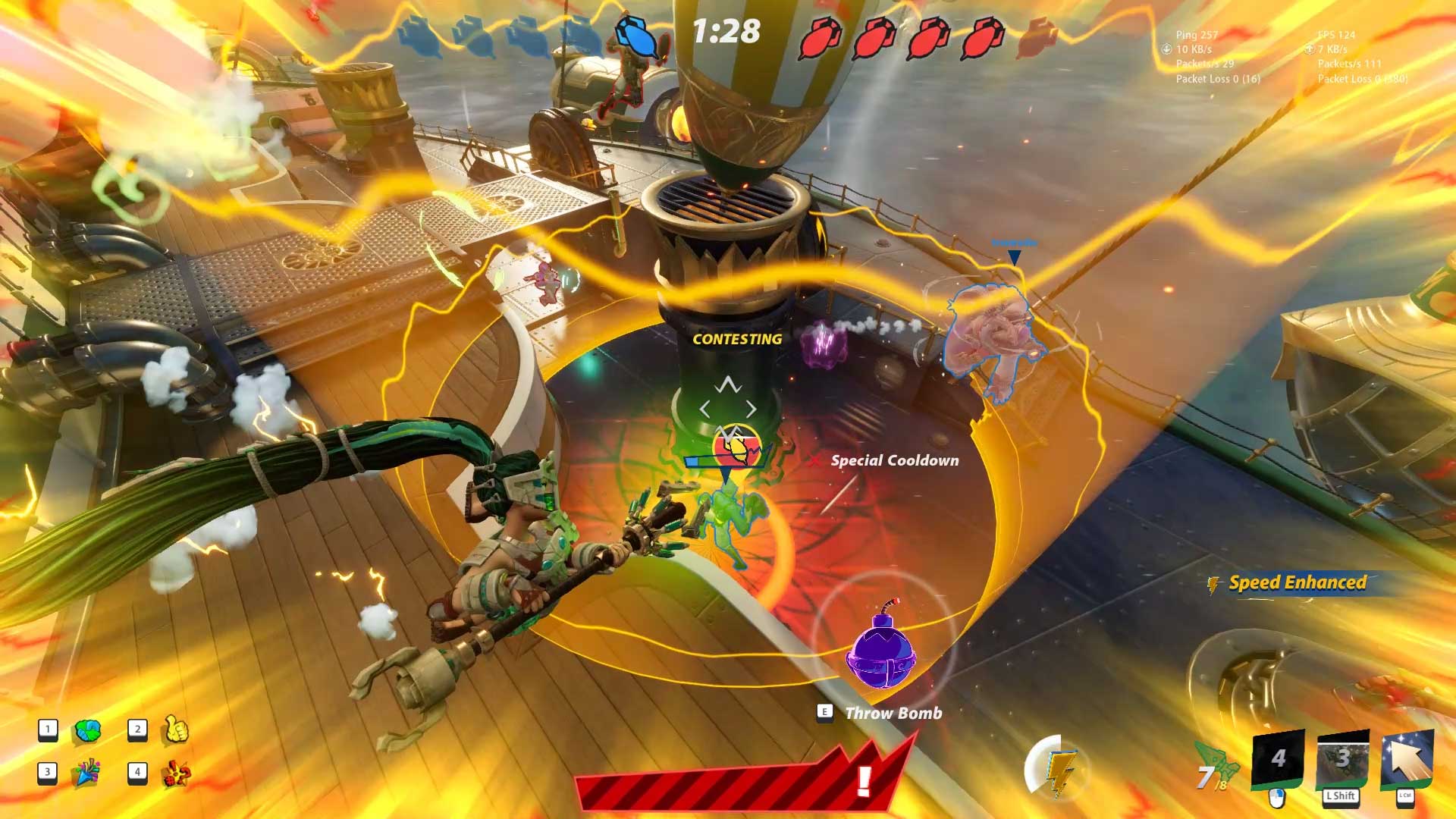 Is Rocket Arena a PvP game? Well, yes and no. The game does include a training range where you can hone your skills and mess around with the different combinations of characters available. Here you can test out your skills and get used to the abilities. In addition, there’s also a shallow PvE Bot Attack mode where three players fight off waves of robots. These robots get tougher to defeat as you knock them out. There’s not a lot to enjoy in this mode, to be honest, but thankfully, you can complete your daily and weekly challenges while playing this PvE mode too. This is great if you don’t feel like playing PvP with a certain character as your challenge tasks you in doing so. Of course, there’s also a custom game mode. Rocket Arena includes cross-play at launch too, just for those interested.

The game also forces you to invest in your characters too as each hero includes a 100-level progression system where you can unlock skins, totems and rocket parts. You also earn and unlock artefacts throughout these progression trees that let you equip up to three of these items onto your hero to improve stats and abilities. This ranges from decreasing your cooldown to improving your Megablast bar. Some of them even increase your movement speed in the air. These will go a long way to create your ideal character. 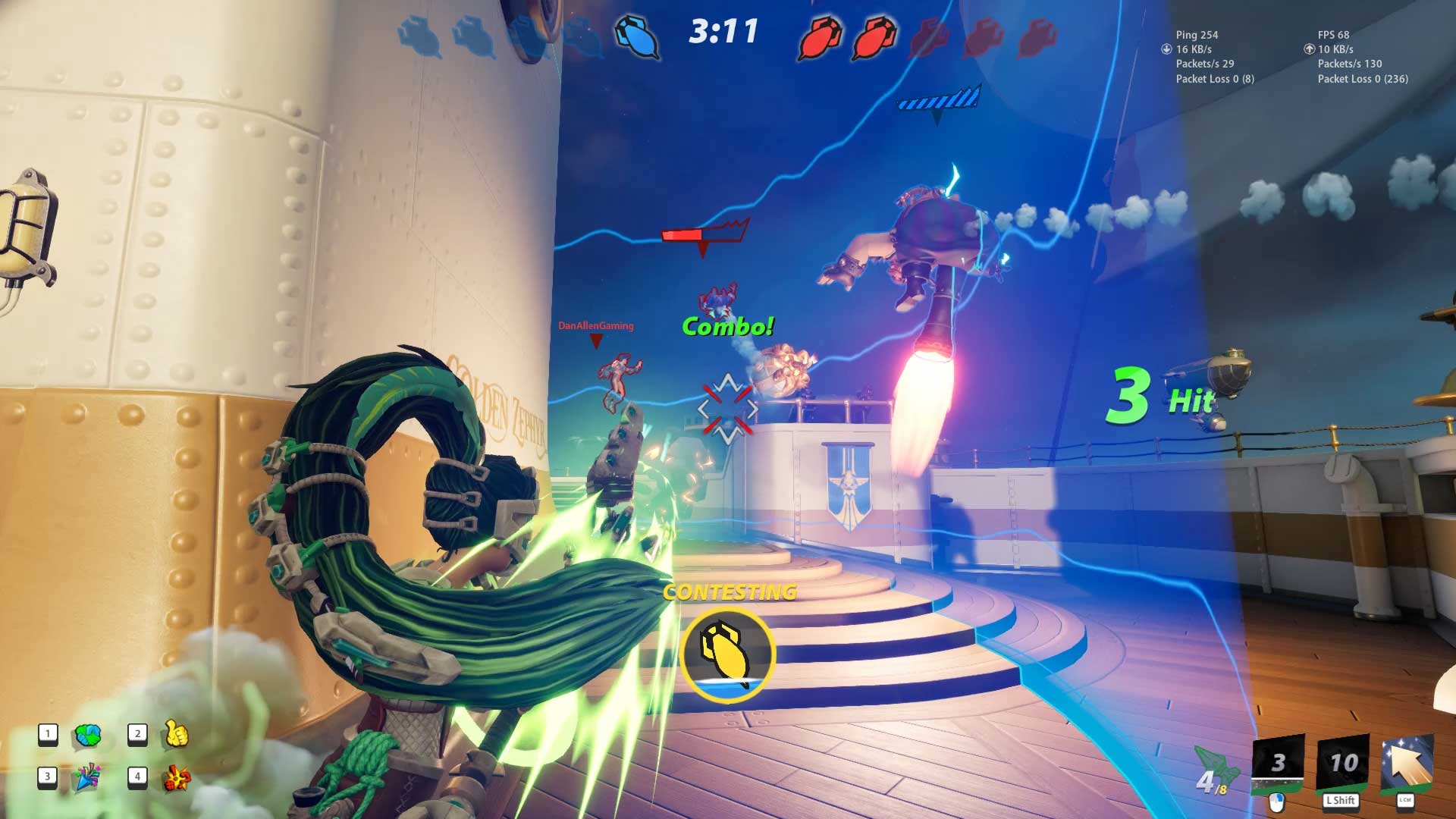 Rocket Arena does include in-game purchases through cosmetic items. However, everything you can purchase can be bought with either Rocket Parts which are earned in-game through challenges and matches or Rocket Fuel which is purchased with real money. There’s also a battle pass system coming soon after launch that will include a range of outfits and items to earn. This pass will also need to be purchased separately. I know what you are thinking, a battle pass in a paid game? I get you. However, EA Games presented a full array of free content headed to the game in the coming months and it is a lot of it. New characters, maps and modes will be added in the distant future. As long as that stays free, then paying for a battle pass is not the end of the world. Well, I think so anyway. The pass will also be quite cheap too according to EA.

Rocket Arena delivers and a fun and exciting approach to competitive gaming. The future looks promising for the game as EA claims that new seasons will bring new metas, content, characters maps and much more. Do I wish the PvE was a little more fleshed out? Totally. However, the PvP portion of the game is so damn fun and addictive that it will see me going back for months after launch. There’s something truly unique about this game and I suggest anyone who is bored with the current PvP games on the market should give this a go.

This Rocket Arena review was based on a special 6-hour review event where we played the game on PC and experienced an extensive look at the modes, characters and gameplay. We hope to revisit the game in the coming months as it receives new content and modes.