It has been over a decade since the last mainline entry in the Samurai Shodown franchise released so I won’t blame you if you haven’t played a Samurai Shodown game before, or even know what it is. When you think of fighting games, Street Fighter and Mortal Kombat instantly spring to mind as the top franchises, but after playing the soft reboot of Samurai Shodown, I will now think of it amongst the greats of the genre.

Let’s kick things off with the story mode, as that is by far the weakest element of Samurai Shodown. The game takes place in 1787, during the Tenmei Era of Japanese history, where a dark evil looms over the lands. Shizuka Gozen, the spirit of a young woman who is trapped in Eternity, wants to destroy the entire country and that threat calls warriors from across the lands. 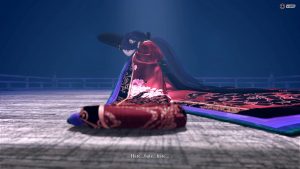 You can pick any of the 16 unique fighters and start your journey, fighting through the game’s levels with some cool character intros. I picked Earthquake (because it was one of the only non-Japanese names, so I could pronounce and spell it), a massive fighter that reminded me a bit of Majin Buu from the Dragon Ball Z anime and set off on a quest to pillage the lands, possibly even clearing it from evil while eating some chicken. 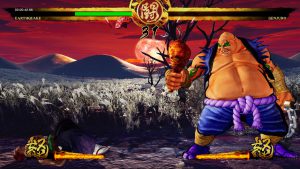 The thing is, the story felt so crazy and foreign to me that I didn’t really connect with it at all. There’s even a timer tracking how long you take to complete it and it only takes a hour or two to complete, depending on how long you take to kill the final boss, featuring multiple phases and throwing your standard slow, methodical gameplay Samurai Shodown does so well out of the window for the first and (thankfully) only time. Basically, the story isn’t memorable at all but I won’t spoil the ending for you anyway.

This high-stakes, methodical gameplay with slower movement is where Samurai Shodown shines the brightest. I’m used to the high-speed fights of Mortal Kombat and Injustice, but Samurai Shodown with its weapon-based combat and slow one-on-one duels really changes up the pace, a welcome change at that. 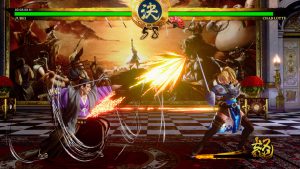 Hitting with a heavy attack can take down nearly half of an enemy’s health, so strategy and focus was required and I couldn’t just smash buttons and hope for the best. You have three types of attacks, a kick to break an enemies guard, deflections, a few special attacks, an ultimate ability and a rage meter. The latter allows you to go into somewhat of a battle trance, dealing extra damage and giving you the ability to throw out a devasting lightning attack.

weapon-based, slower combat really makes it feel as if you are in a one-on-one samurai duel

The weapon-based, slower combat really makes it feel as if you are in a one-on-one samurai duel where every misstep can have dire consequences, like being chopped in half after not reading your opponent correctly. It is absolutely fantastic and feels so great to play, thanks to the game’s extremely smooth FPS and beautiful, anime-style graphics.

On a technical note, I experienced no FPS drops or big issues, with the only small graphical glitch being that sometimes characters’ clothing clips into their body. However, those incidents were few and far between. The sound quality is also pretty great and the slashes from your weapon sound amazing, while the voice action is okay, but not amazing. 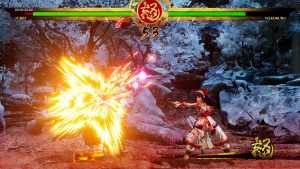 So the game has great combat but very little in terms of story. However, it does have an awesome asynchronous multiplayer ghost mode, which can really be seen as a single player experience. You fight other people’s ghosts, controlled by AI that learns from a player and adapts to their fighting style.

This mode was simply awesome, as I played against ghosts that took on the playstyle of a real player. One character just kept jumping while doing a specific move, while others had a more well-rounded fighting style. 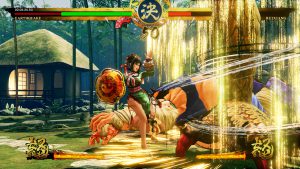 This ghost mode really shines as you never know what type of playstyle you will be facing. Further, as you play, your ghosts also learn from you and it is just awesome to know that somewhere out there, another player is facing your ghost. Then, we also have an Iron Man ghost mode, where you need to fight against 100 other player ghosts in succession to see how far you can make it, which I am still playing even after my review period with the game as it is just so addictive and interesting.

Then, we the multiplayer. It has that same feeling of a one-on-one samurai duel and here in South Africa, I am always worried about how it will play with the latency to international servers for fighting games. This is probably the greatest aspect of Samurai Shodown for me, as the game feels extremely smooth playing against international players. 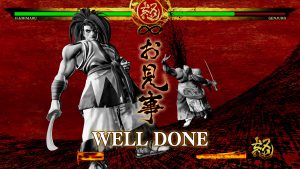 Right at the start of a match, you get about two or three seconds of lag and afterwards, it felt like I was playing against an AI opponent in terms of smoothness. I have no idea how developer SNK managed to pull this off but it is the best multiplayer fighting game experience I have ever had from South Africa. It was so smooth, in fact, that I felt like I could go into ranked matches for the first time with a fighting game.

Samurai Shodown, with its small story experience, is all about competitiveness and climbing the ranks against others. Everything has leaderboards, from the story mode time completion to your standard multiplayer as well as your progression in Iron Man ghost mode. Even your ghosts have ranks and statistics, and the more you play, no matter if it is against AI or real players, your ghost level increases. 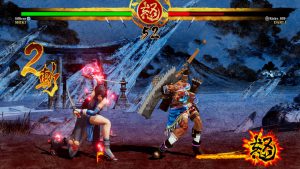 Lastly, the developer even gave away the Season Pass for Samurai Shodown for free, which is a big move that really made me love the game even more. We are all so used to paying for a Season Pass, but I managed to grab mine for free and it would normally cost you over R300.

Samurai Shodown doesn’t have much in terms of a story but its other gameplay features shine through. From the awesome asynchronous ghost mode and its Iron Man version, to its smooth multiplayer experience from South Africa and its gorgeous anime-style graphics, there’s a lot to love about the game.

The best part about Samurai Shodown, however, is how the game focuses on 16 characters and their fighting styles, instead of throwing dozens at the player. With a smaller roster of fighters, the balance, as well as overall combat, just feels sharper, more refined and absolutely fantastic to play.