Advertisement
The Scariest Clowns in Movies, TV and Video Games 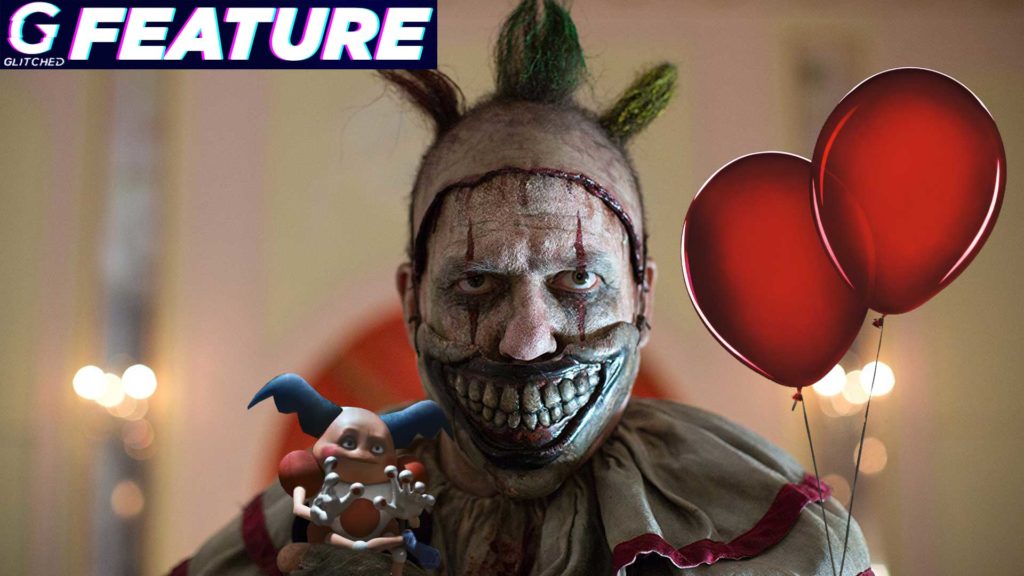 Coulrophobia, the persistent and irrational fear of clowns is nothing new and in today’s world with horror movies, games and TV shows trying so hard to push the limits, these characters have become more present in the media we consume. With It: Chapter Two releasing in cinemas tomorrow in South Africa, we thought we would go through some of the most iconic clowns in media. For some, this may be interesting, but for others, it will be just too darn scary.

RELATED: Joaquin Phoenix Lost 23 Kgs for His Joker Role and it Almost Drove Him to Madness

Take a look at our list of the scariest clowns we have encountered.

Warning: Some of these videos included in this article may be disturbing. They depict the scariest clowns around. Watch at your own risk

It simply cannot be a list of the “scariest clowns” without including the most iconic clown in horror films. It takes the cake as the original 1990 character adapted from the Stephen King novel is just as scary as the 2017 remake. “It” itself is actually a shapeshifting creature that has the ability to transform into one’s fears. Why he chooses a clown most of the time is quite clear, everyone has some sort of fear of them. But this clown is the scariest when his head is half open and all his teeth start sticking out. We would rather have the fully-makeup version.

DC’s iconic clown is a staple in the world of geek and the more we see of him, the more we love him. Every new adaption is a refreshing take on this deadly villain but his most iconic version has to be the insane Joker from the Arkham Asylum video game. There was just something about exploring the halls of a mental asylum locked down by the clown prince himself as he slowly tried to drive you to madness that freaked us out. There will just never be a more iconic clown supervillain no matter how hard Marvel tries.

Dropped on his head as a baby which caused him to have a minor mental disability, Twisty suffered multiple heartbreaks as the town of Westchester accused him of molesting children. It was a series of unfortunate events that led to him attempting suicide which in the end failed. He shot off his jaw and was forced to wear a prosthetic mask. Twisty was never evil and turned bad after he was shamed by the city. In order to “keep children safe” from their parents, Twisty kidnaps them and locks them away in his makeshift house. In the TV series, Twisty is never actually caught and his appearance is hinted at in future seasons.

While it may not be the Oscar-worthy film of the century, Clown has a pretty decent story. A husband puts on a clown outfit after the one he booked for his kid’s birthday cancels. The outfit is evil and possessed by some dark entity. It slowly becomes part of him the point where he cannot remove it and it takes over his mind. He goes on a murdering rampage, because clown things, and is driven to madness.

So if you have a fear of zombies and clowns, you’re pretty much screwed with this one. In the 2009 zombie hit Zombieland, there’s a specific scene that centres around a once-innocent clown now-turned undead. Even for those who don’t mind clowns, this drooling, smiling “creature” can even be a little unsettling. Never fear though as he gets his face smashed in and his cute little “boing” nose makes the sound and everything while it happens.

The world of Pokemon is filled with all sorts of creatures and of course, there will be a clown. Mr. Mime may seem cute and innocent but even if you like clowns, this Pokemon is deadlier than he seems. For much of the Pokemon generation, Mr Mime’s description detailed how he would “slap around” anyone who interrupted his miming. The poor kids that just wanted a selfie with him would suffer greatly.

A film about an alien race from a distant planet that just happens to resemble clowns? Sounds way too convenient. The worst part of this all is they want to invade a small town, capture, kill and harvest people to use as sustenance. Not to mention they don’t look like your average run-of-the-mill clowns either, rather deadly freaks of nature. This is not your average clown movie.

Sweet Tooth (Needles Kane) is an iconic gaming character from the Twisted Metal series but how much do we really know about him? Well, for starters his head is on fire all the time. Yes, ALL THE TIME due to a curse put upon him by a preacher right before the clown was about to be executed. In order to remove the curse, Sweet Tooth had to win the Twisted Metal competition to get a vial of the cure, which he did. However, the organizer told him if he ever returned to crime his head would burst into flames again. Sweet Tooth decided killing was too much fun to abandon and destroyed the cure.

This is another iconic clown character which you have all seen at least once before. In the 1982 horror, Poltergeist, the Clown Doll gets possessed by the evil spirit in a child’s room. He haunts the poor innocent boy before sneaking behind him and grabbing him. The clown doll then drags the child under the bed. At least the child puts up a fight and completely destroys the doll. One less freaky clown doll to worry about in the world.

Trust a court mage to be the evilest and most sinister being in a video game. Sure, it is a cliche story plot but Kefka Palazzo is an iconic clown from the Final Fantasy series. Kefka hates everything that ever existed, has an iconic laugh and is known for his God of Magic final form which you fight in the game. Even in his appearance in other Final Fantasy spinoffs, Kefka’s need for chaos is impressive. All he wants to do is destroy everything and he does it with a full face of clown makeup on.

Which of these scariest clowns would you hate to find in a dark alley? Let us know down below.