There’s a certain magic that oozes out of a fantastic From Software game. It is challenging yet rewarding, features an eerie story with complicated side plots and character depth, and most of all, it keeps you guessing as explore the vast yet frightening world. Sekiro: Shadows Die Twice has an abundance of this as I venture through the great mountains, temples, forests, battlefields and hidden chambers of 16th century Sengoku Japan. Every turn was met with a great sense of reward as I finally reached a safe haven, countered the boss I was stuck on for an hour and unlocked that one ability which I had my eye on for a while.

Check out our full video review of Sekiro: Shadows Die Twice below

Every death meant I was doing something wrong or I was unprepared for the battle I reluctantly entered while venturing through the massively interconnected world. Sekiro: Shadows Die Twice is one of the most challenging From Software games to date but its layers of complexity add countless ways to tackle a tough spot and that is what makes it so unique while still keeping true to the elements of a Dark Souls-like experience. 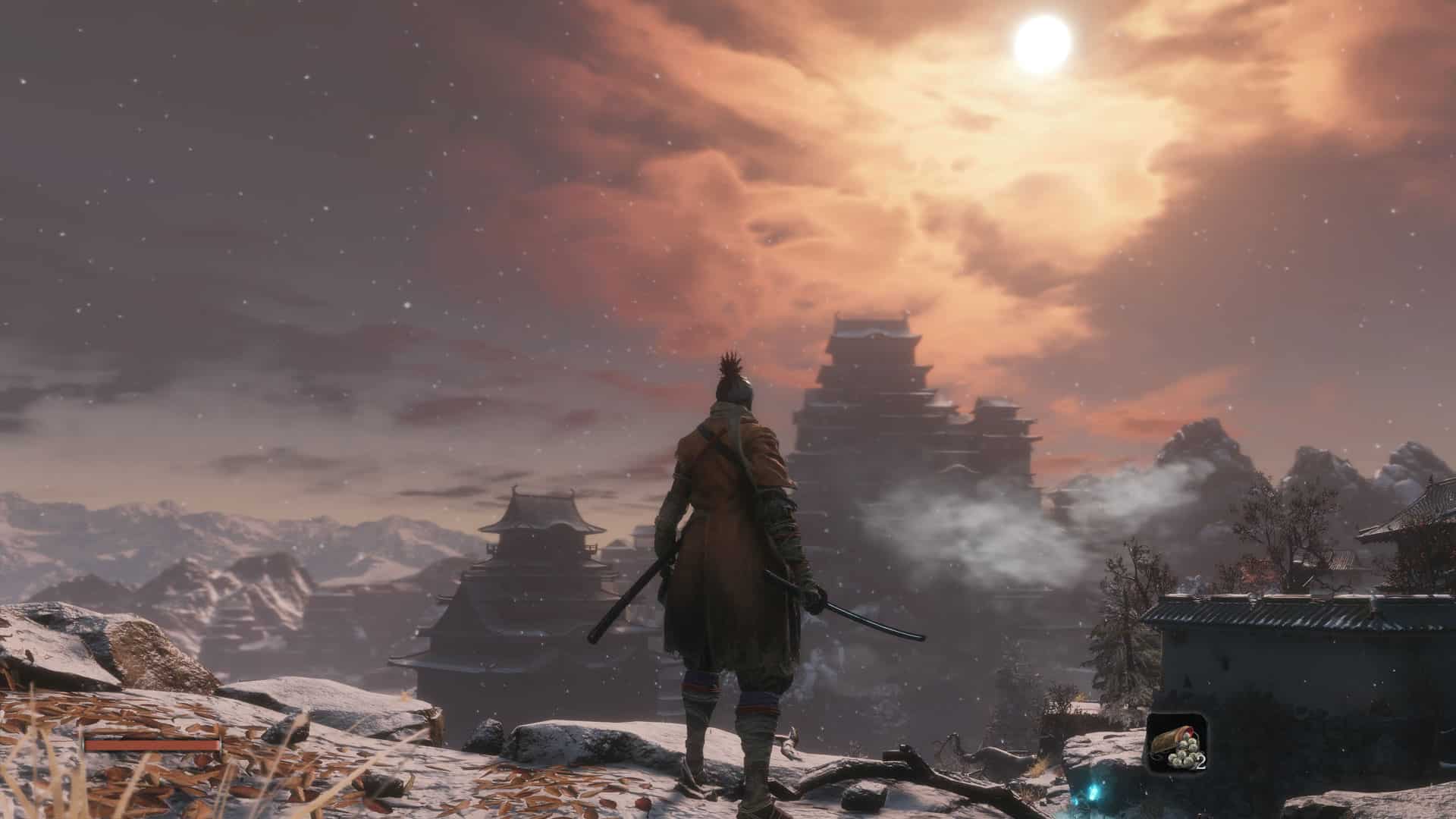 Set in 16th century Sengoku Japan, Sekiro: Shadows Die Twice kicks off with a bang. You take on the role of Sekiro, the One-Armed Wolf that obtains his title after losing his arm during a fight while protecting Kuro, the divine heir. Kuro gets kidnapped and taken to the top of Ashina Castle and Sekiro, now with a prosthetic arm in place of his lost one, sets off to retrieve him at any cost.

Throughout his adventure, Sekiro must fight through the relentless bosses, make tough game-breaking decisions, and master the various equipment and skills he discovers along his way. But the changes to gameplay and the removal of some of the RPG features keep the game interesting even throughout the hardest of times. Gone is the levelling system. You can no longer increase stats and offer a “blood-like” substance to a lady to power up. Gone are equipment sets which see you build and master your character’s equipment set and weapons. Instead, Sekiro’s progression takes a backseat to let the great world and gameplay take centre stage. 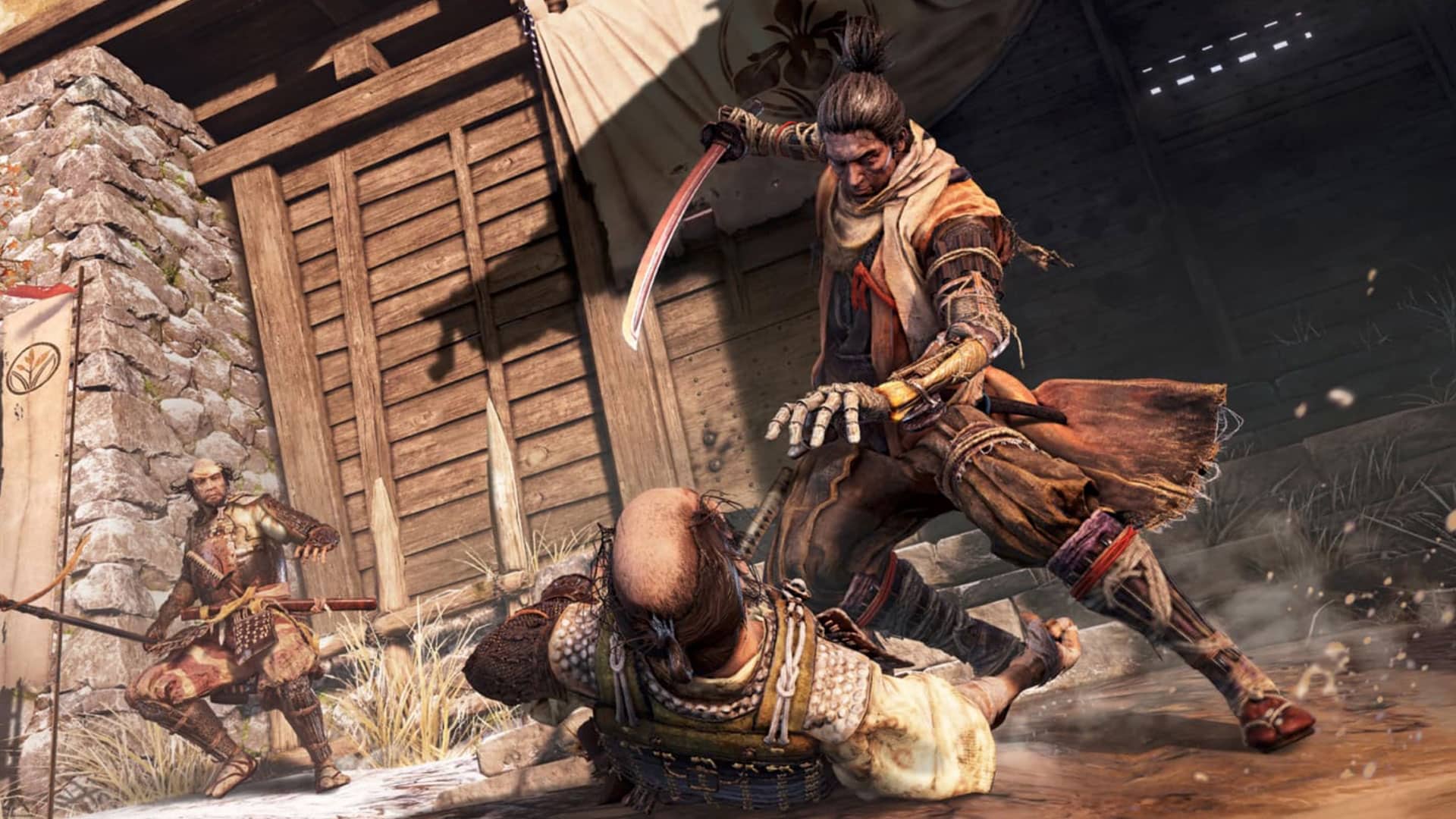 Sekiro is armed with his Mortal Blade, of which is his only main weapon. The Prosthetic Arm, however, is where things get technical. This wooden contraption can be equipped with various weapons and tools that serve you in combat. You obviously need to find them first which often means climbing to the top of a mountain, fighting a deadly ninja and claiming the treasure he is guarding.

These tools are unique and every one of them has some importance over the other. The Loaded Shuriken can shoot out, well, Shurikens that damage enemies and one-shot wolves. The Loaded Umbrella is a hilariously-funny looking metal umbrella that Sekiro can unwrap and hide under, and the Loaded Spear is well, a spear with some great range attacks. 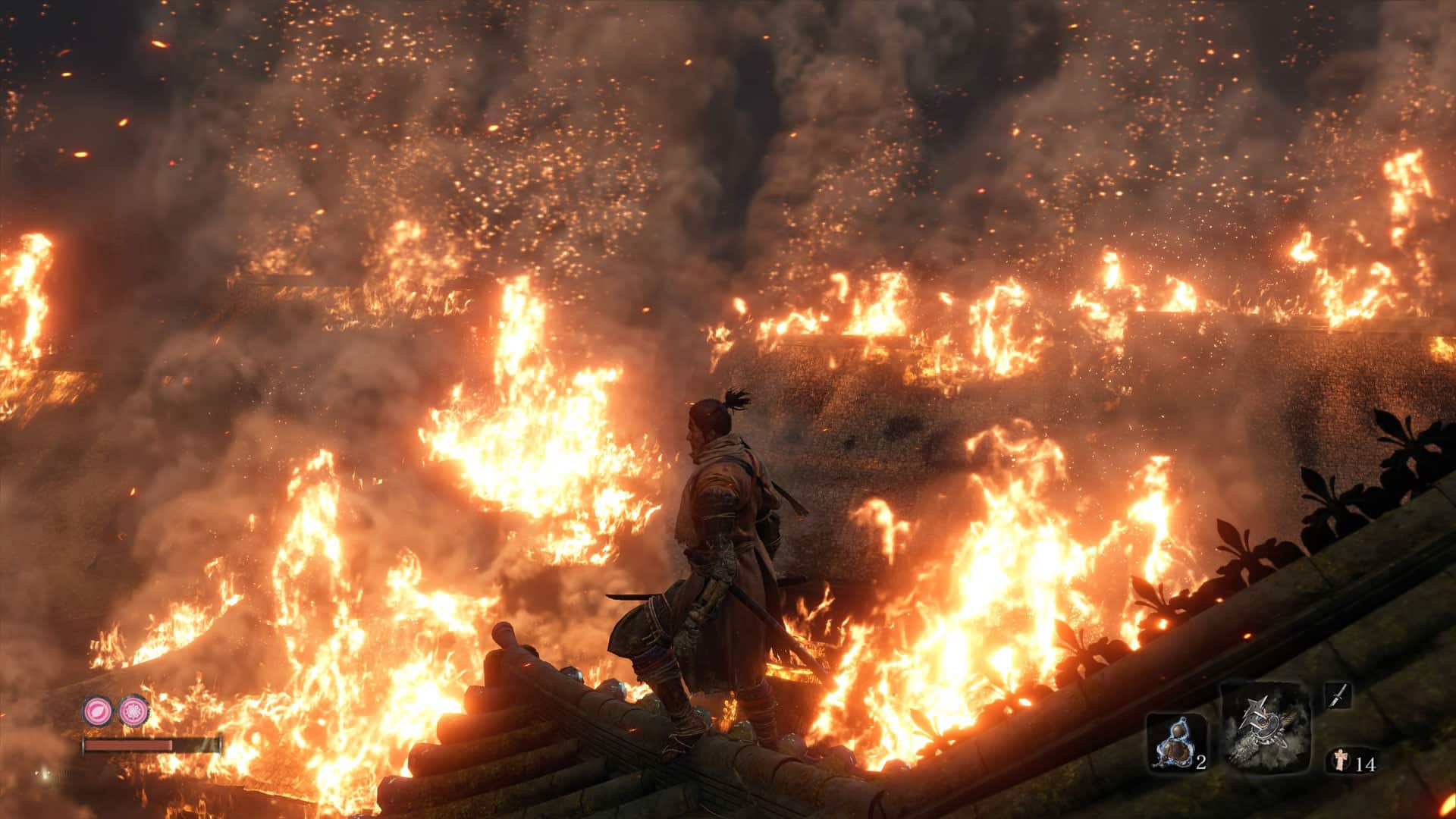 These tools are found and given to the Sculptor at your safe haven, The Dilapidated Tower, where he equips them into your arm. You can, however, change them as you go without going back to him. You can also test them all out at the nifty “combat range” which is more just one enemy that never dies and loves being sliced apart. The Prosthetic Tools can also be upgraded using various materials later in the game to enhance their abilities and reduce the Spirit Emblem cost.

Sekiro is a deadly machine but his foes are even deadlier which is a staple for any From Software game. There is a lot going on around you and Sekiro’s freedom of exploration adds a breath of fresh air to the hardcore RPG experience. Using his grapple hook, Sekiro can leap up to buildings, jump across gaps and reach some tough spots that are most likely guarded by a boss with a treasure to claim if you overcome the challenge. 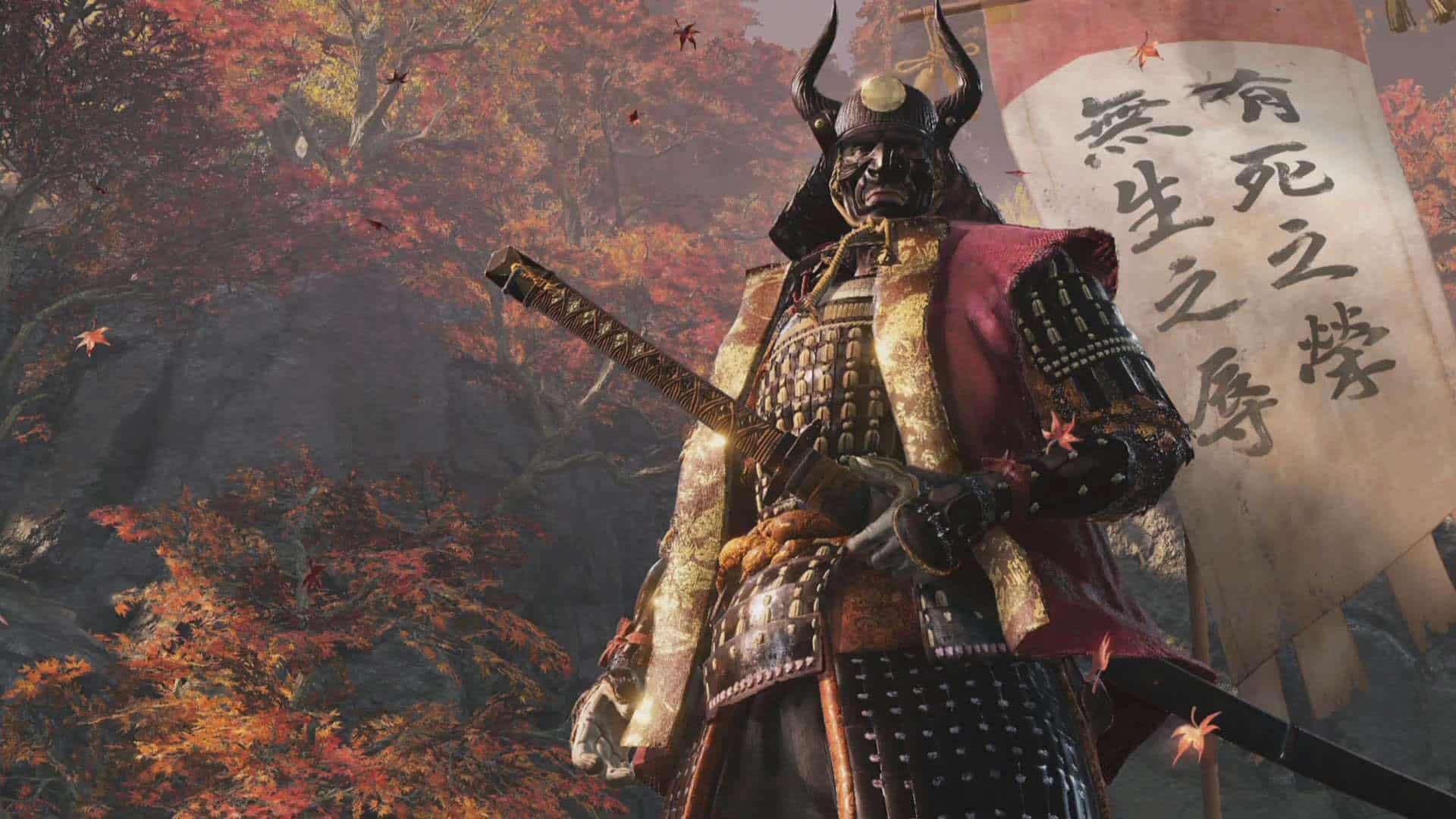 The exploration is not perfect as it requires you to hook onto specific objects when the icon goes green. This does not always happen. You can see the icon and you leap towards it but somehow Sekiro just fails to acknowledge that it is there and you go tumbling to your near death or fall into a pit of enemies as you jump around to try and avoid death.

The exploration also opens up new opportunities to use the game’s stealth system and it is fantastic. Walking along a rooftop that I just grappled to only to leap down from it and take out an enemy never got old. Being on top of things means you can also scout ahead to see what danger await but most of all, the sheer level of verticality allows for the game to feel much bigger with a great sense of freedom and it works brilliantly. You not only look like a true ninja leaping and grappling from tree to tree but you also feel like one and the great use of the system is truly exceptional. 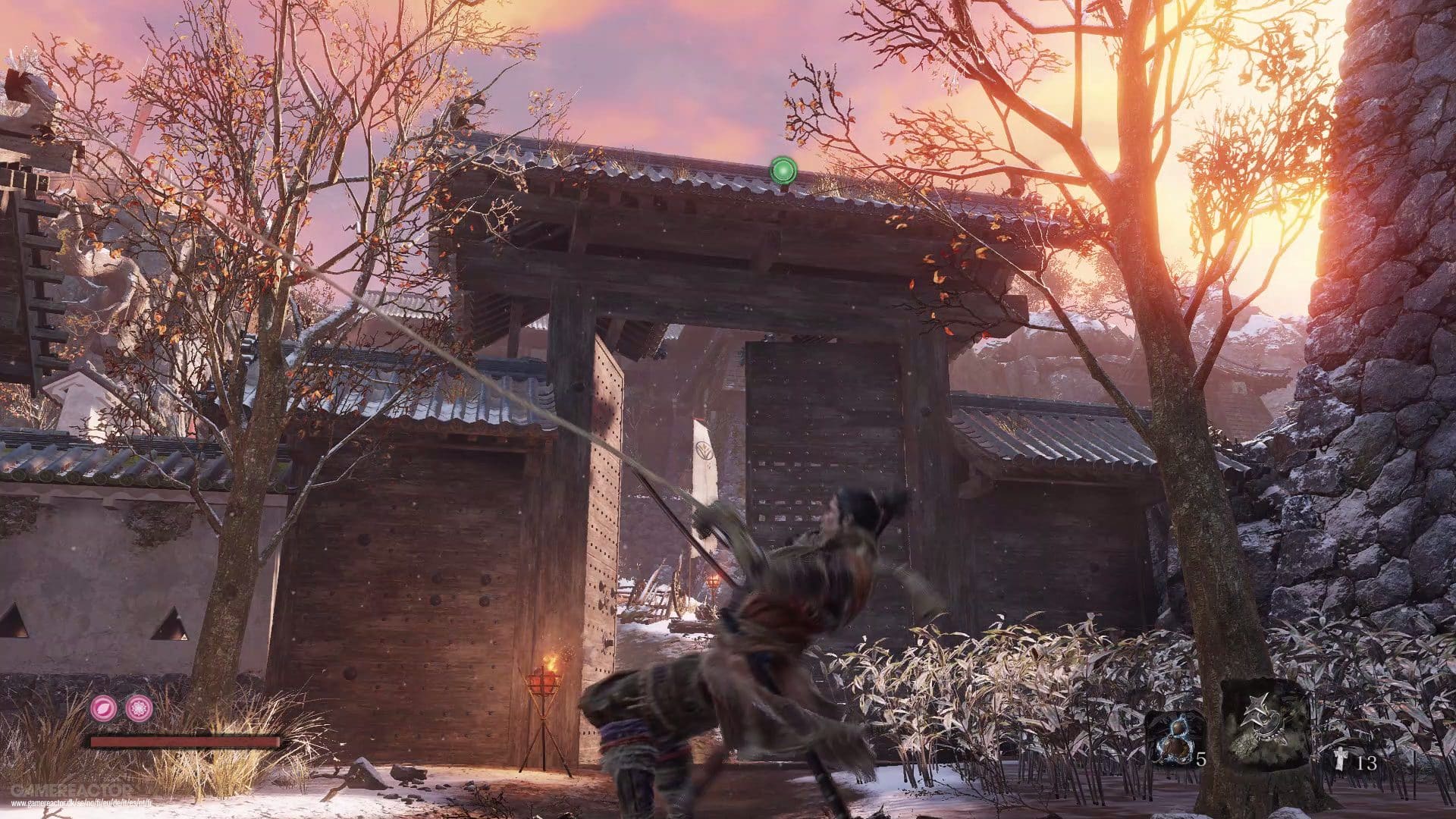 Sekiro: Shadows Die Twice not only reworked its exploration but the combat is as new and refined as ever. Somehow, the masterminds at From Software managed to implement a completely new combat system into a game but make it feel like a Dark Souls experience all at the same time. Using his blade, tools, and items, Sekiro needs to overcome the many challenges that are thrown at him throughout the game and when I say “challenges” I mean it. Just like Dark Souls, this is no walk in the park but every challenge was met with a frustrating grin on my face.

Gone is the stamina bar we all relied on in Dark Souls and instead, the Posture Bar is the key to survival in Sekiro. This bar fills up as you fight in combat but only when you get hit, or successfully parry an attack. Every enemy also has a bar that makes things fair. Once the bar hits its max the enemy will get staggered allowing you to deal a Deathblow. These deathblows instantly kill an enemy or take away one health bar but the same can happen to you. 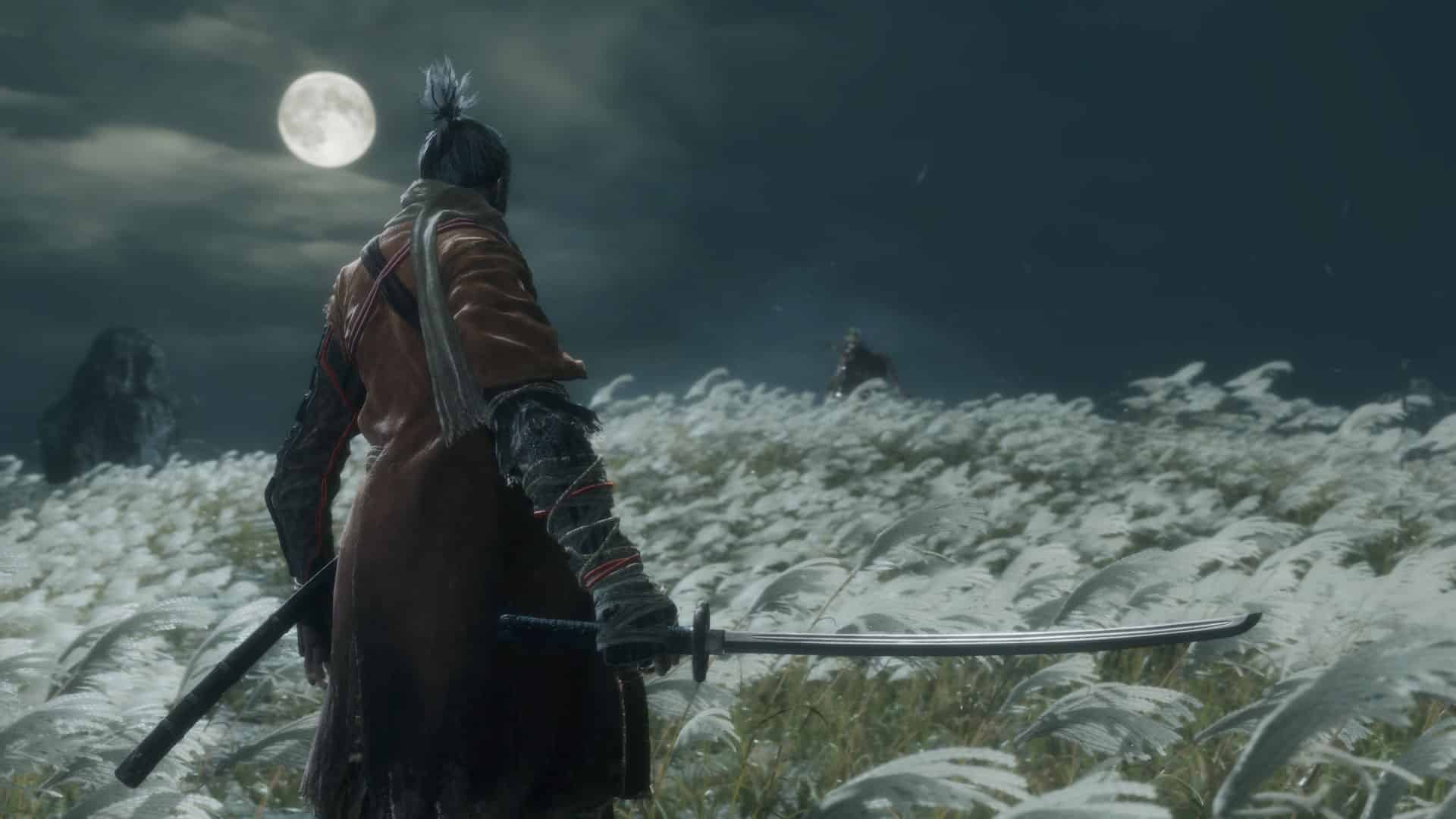 What this means is that combat is an intense matchup of trying to stagger your foe, preventing being staggered yourself and perfecting your parries which relies on you pressing the block button at just the right time. Basic enemies can be parried twice before being staggered and killed while boss fights are longer, sweaty and much more layered due to their unblockable “perilous” attacks. Sekiro can also unlock skills to help counter specific abilities such as thrust attacks which come in handy when you fight anyone with a spear.

Of course, it is not all sunshine and rainbows as this game is meant to be hard. Various enemies require a decent amount of understanding in regards to their attacks and skills. You then have to juggle multiple at the same time while trying to stay alive, stagger your opponent and make sure you don’t fall off a ledge. It is unforgiving but I loved every second of it. It would not be a From Software game without those heartbreaking moments and Sekiro has plenty of them. There was just nothing worse than being three-shot from a distance by enemies with a rifle while you tried to fend off a wolf that was trying to eat your face. 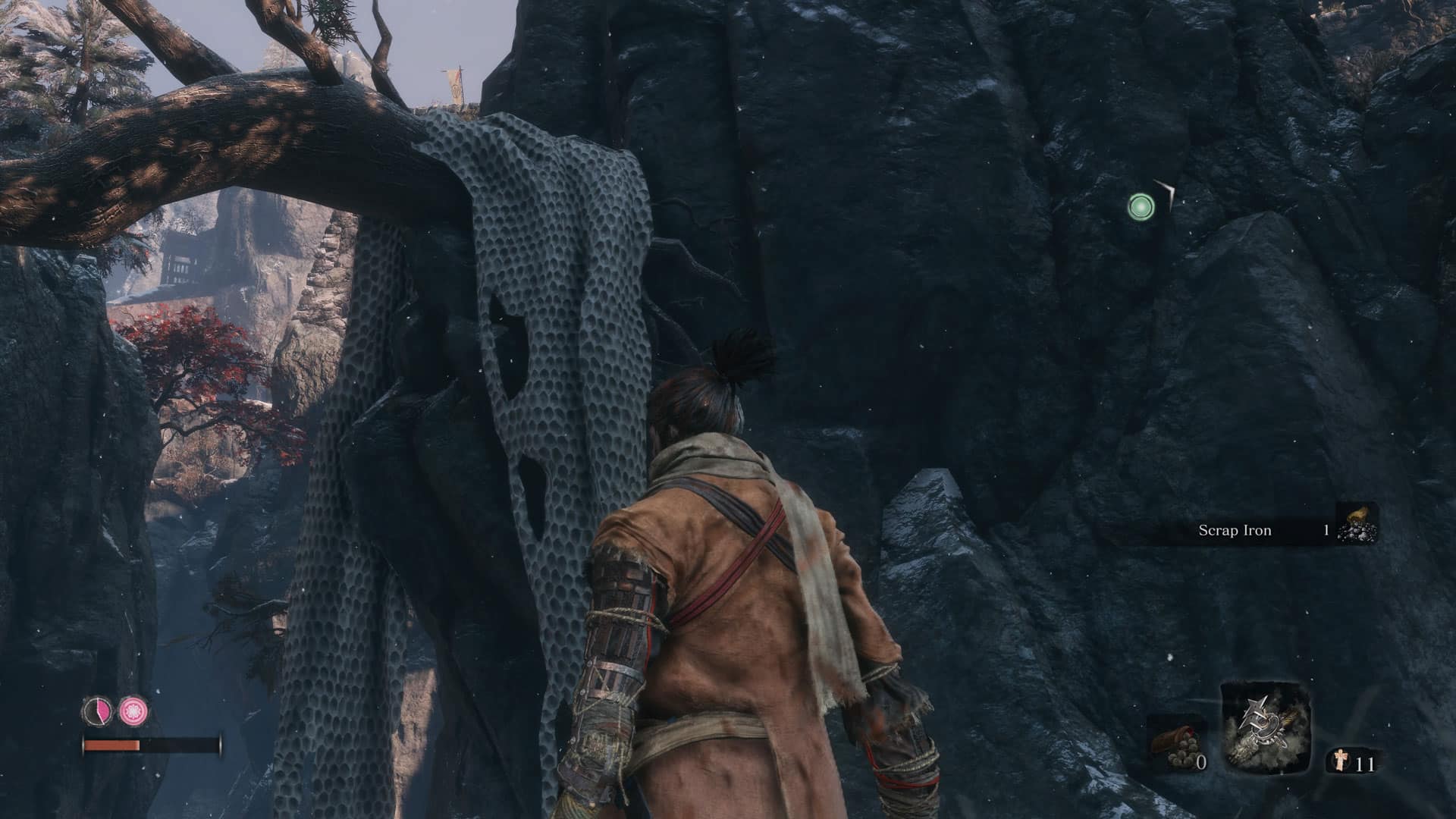 Sekiro also has a less focused boss fight system. There are actually a lot of bosses scattered around the game but most of the time you will be facing off against these mini-bosses that have two or three bars of health. Stagger them and they lose one bar but you can also try and sneak up on one and deal a stealth blow instantly taking away a bar of health too. There is a lot of freedom here and you can take on any challenge the way you want to.

Some bosses even incorporate the grappling hook which you can use to get around the are and even pull yourself to the boss to deal damage. The real tactics come from the items which you can use to complement the tool you have equipped. Cover the boss in oil and set him on fire with your flame tool or use an Ungo Sugar item which greatly increases your defence and posture to go to town with your Loaded Axe while being able to tank more hits. Every boss and every challenging enemy is a new opportunity to experiment with everything Sekiro has to offer and this is the peak of the combat. 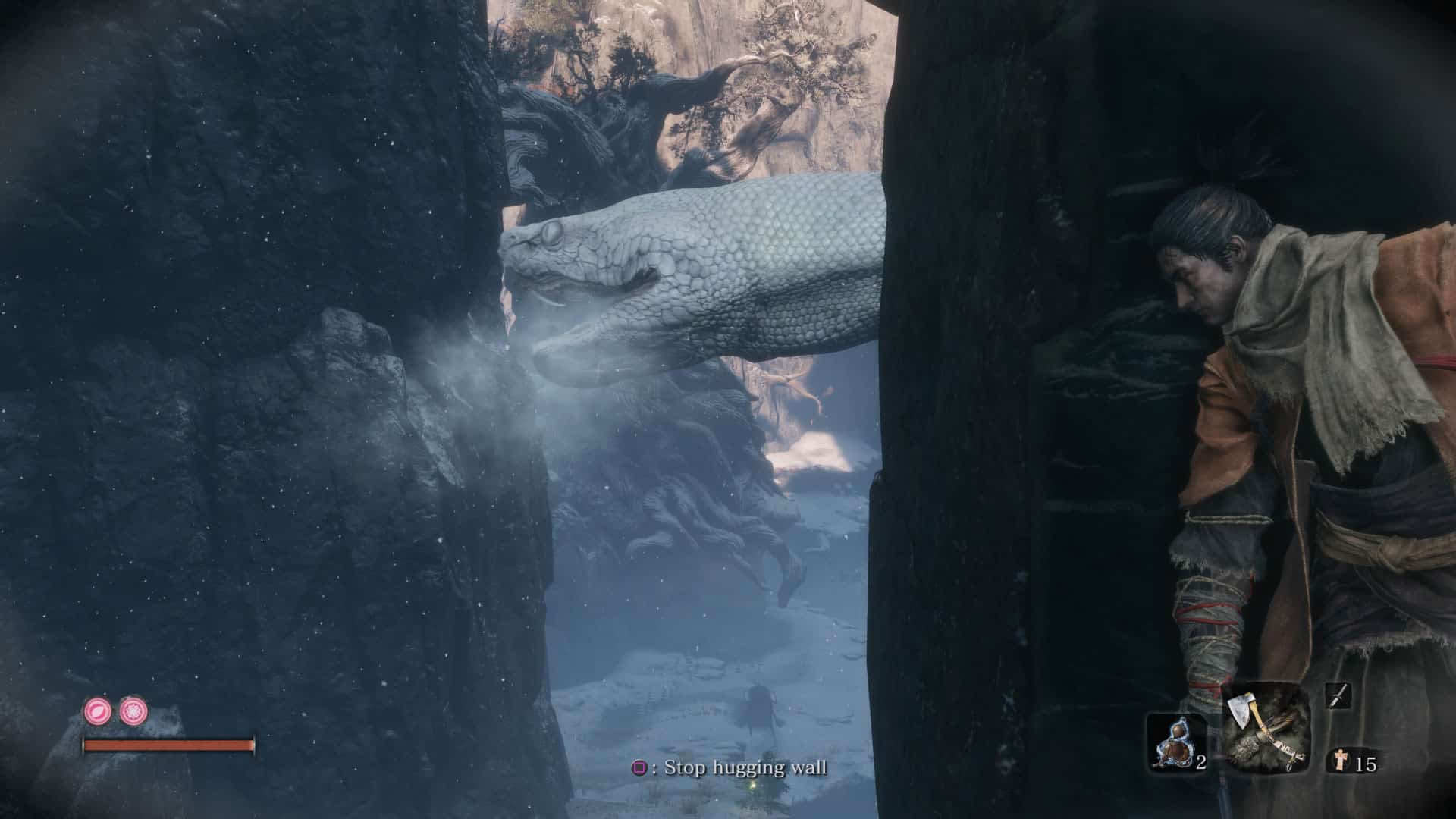 Of course, there are bosses which will be tough to fight and I would know, I left a very early fight for almost the entire game before going back to kill her. If you die and die again, then rather take a new route and come back. Sekiro’s death system is more than just dying. When you fall in combat you can resurrect under certain conditions to instantly go back into battle. However, this has an impact on the people around you and the chances to be helped with Unseen Aid. This is a complicated and layered mechanic in the game that instead of you losing half your money and a bit of XP, you don’t thanks to this “Unseen Aid”. The more you resurrect, the sicker people get around you as they are inflicted by a disease called Dragonrot.

The Dragonrot mechanic is just but one of the many layers that make up Sekiro’s story and characters and of course, you will have to play the game a couple of times to get all four endings. It is a From Software tradition that you get put through the torture a couple of times and we love the experience for that. 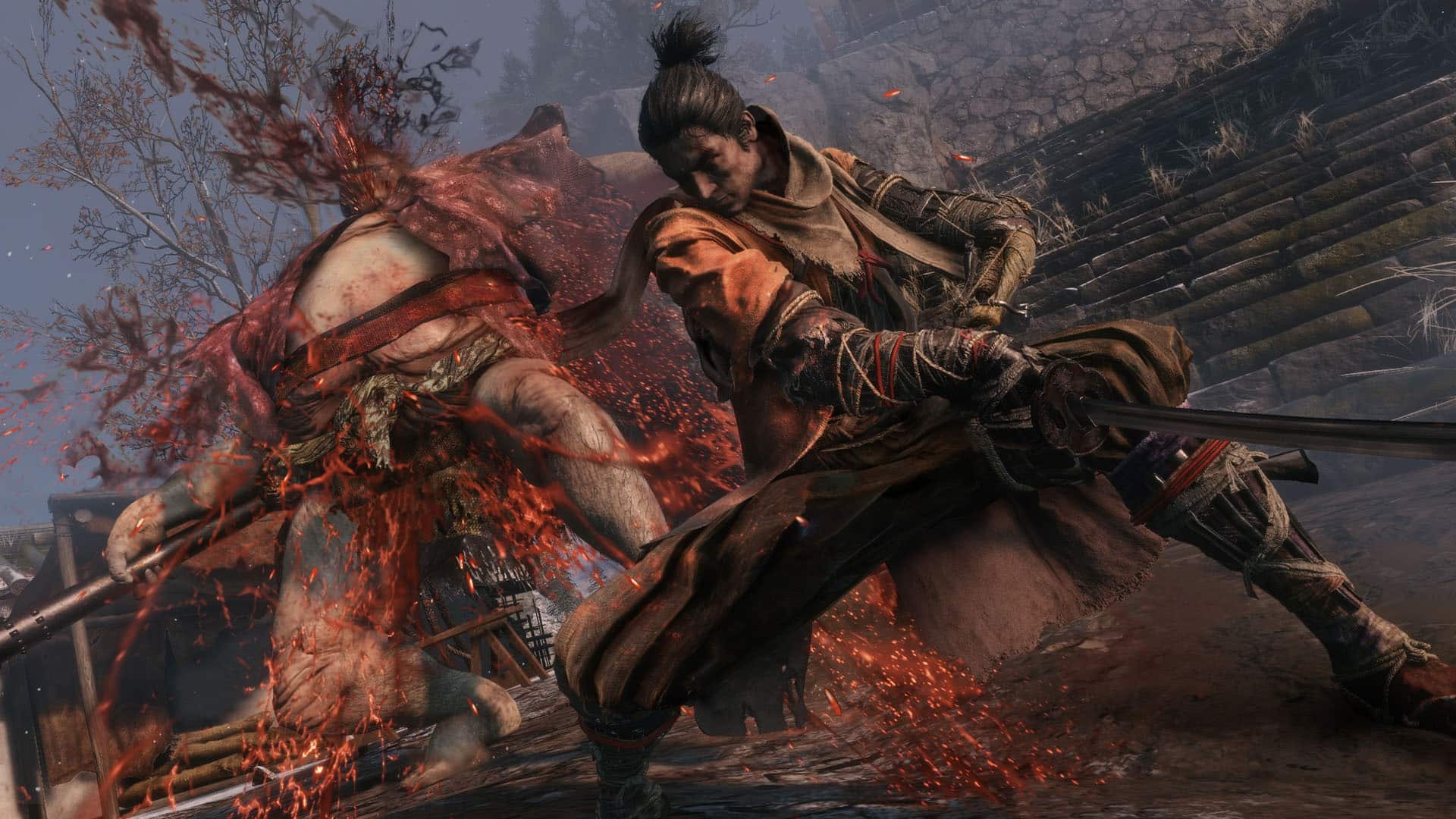 Sekiro: Shadows Die Twice is a phenomenal experience. It is a long and perilous journey of about 45-50 hours that should keep you busy well into the New Game+. It lacks a multiplayer aspect which is quite a let down for me but everything else is simply perfection. It works so well together and it is all delivered in a beautiful package with a refreshing approach to exploration and combat. It is hard, I am not kidding. You will die and die and die but it is the great adventuring, vast exploration and tough challenge in between all the dying that makes Sekiro an exceptional game.

Half-Life 3 Reportedly Not in Development at Valve

Marvel MMO in the Works by DC Universe Online Developer