They say that humans are born with only two fears, the fear of falling and the fear of loud noises and that the rest are learned. They clearly forgot about the most basic fear of them all, the fear of the dark. There are only two types of people out there, those who are scared of the dark and those who are liars. I don’t care who you are, but if you try to tell me that you can take out the trash in the dead of night and see the shadowy outline of tree branches overhead, the hosepipe that kind of looks like a snake and that one weird shape you can’t quite identify and not get the hibbie jibbies you’re lying.

If asked, I wouldn’t say that I’m necessarily scared of the dark. Still, I also know that I’ve walked around my house late at night during load-shedding, and the moon has been just bright enough to allow me to cast a shadow on a wall I’m passing. Your heart literally stops for a moment, and you just look straight ahead and up your pace until you get to where you were going and can breathe again.

Shadecraft takes that instinctual fear and bases an entire comic on it – only in this case, the fear is probably just a little bit more justified. 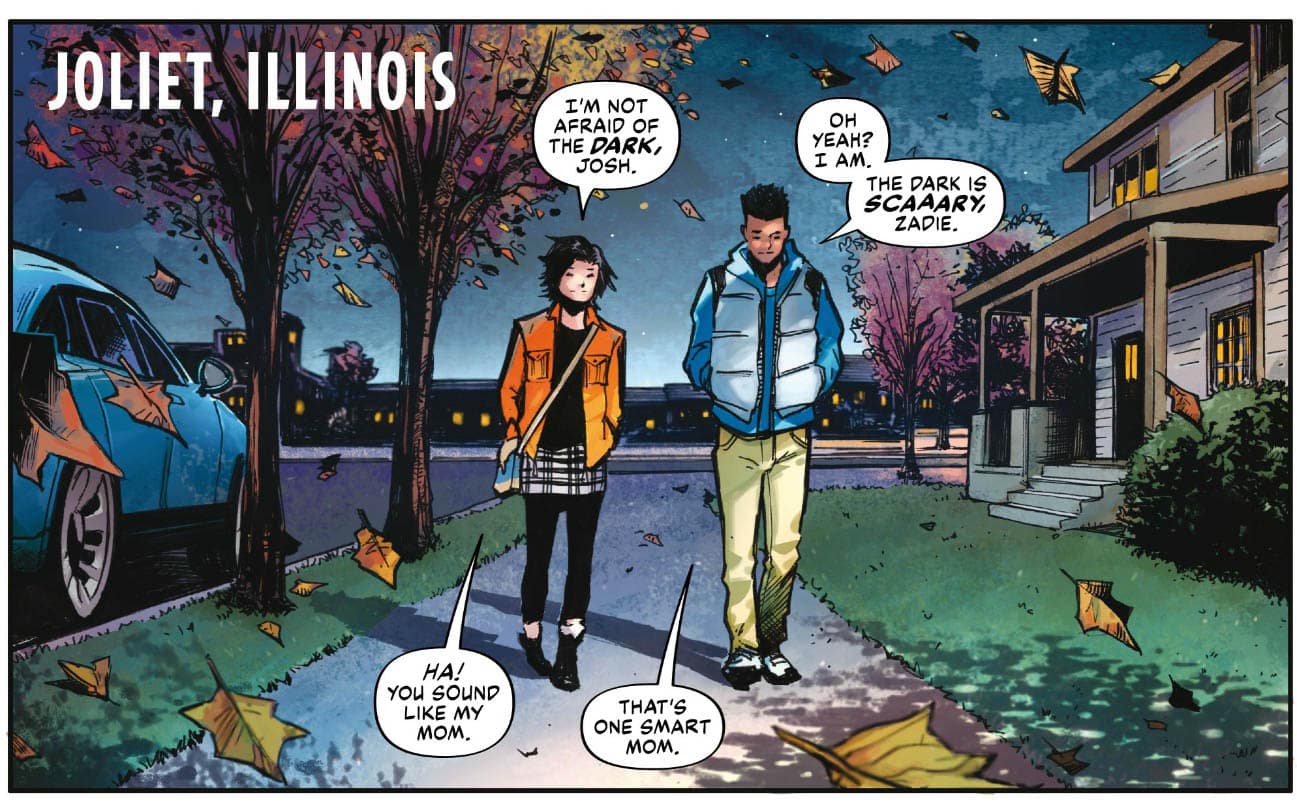 Written by Joe Henderson (Skyward) and with art by Lee Garbett (Loki: Agent of Asgard; The Outsides; London Falling) for Image Comics (Middlewest; Saga; Paper Girls) comes Shadecraft, the story of a girl who is literally afraid of her own shadow.

Shadecraft goes about Zadie, a seemingly normal teenage girl. Her home life has been in a state of constant turmoil ever since her older brother was in an accident that left him comatose. Zadie is trying her best to put her life back together again and return to her new normal, but after she mistakes her friend’s intentions and ends up running off on her own into the dark, she realizes her life will never be normal again.

While most of us have experienced being somewhere alone and then catching a shadow out of the corner of your eye that your mind turns into nightmare fuel, in Zadie’s case, the shadows around her really are monsters – and they’re all set to attack.

Something is happening to Zadie that makes her sound crazy and feel more isolated than she already does. The shadows around her are coming to life, following her and trying to kill her. How can she survive when her own shadow has other plans for her? and how does all this tie back to her family? Shadecraft is the story of Zadie, a teenage girl who has to learn to face her deepest fears before her deepest fears face her.

When it comes to Shadecraft, you can’t not talk about the art. While the writing in Shadecraft is phenomenal, the concept is an exceptionally visual one that was pulled off with a level of expertise that only someone like Lee Garbett could manage. The shadows have so much movement and feel real. Watching them twist and turn into something they’re not supposed to be is profoundly terrifying and oddly beautiful.

If you strip everything else away, Shadecraft is, at its core, a comic about being a teenager and all the emotions, fears and awkwardness that come with it. Zadie was written to have so much life in her. She’s impulsive and says and does things without actually thinking about it. She can be carefree and excitable but also overwhelmingly embarrassed and scared – something that anyone who already made it through their teenage years can look back on and remember all too well.

All of this just works together to create a comic that feels real, engaging and will leave you double-checking your own shadows long after you’re finished with the comic. Every now and then, a comic will come around with a concept that’s so interesting that it reignites my love for the whole medium again. Some ideas were just born to be comics, and Shadecraft is one of those ideas. So far, each issue of Shadecraft has just built on the one that came before. It was off to a promising start with its first issue, but now I feel like it’s gearing up to be one of the best new horror titles of the year.

If you’re looking for something new to read with an interesting concept, phenomenal art and actual character development, then Shadecraft should be next on your ‘to read’ list.

Want to grab Shadecraft for yourself? Head over to Critters and Comics or click here. The series is currently available in the following formats: Digital or as Single Issues (5 Issues)

Lifestyle | Entertainment | Shadecraft Comic – Scared Of Her Own Shadow