Shadow of the Tomb Raider is the most ambitious and greatest entry in the series to date. No, really. From the opening hours right up until the end you get this giant sense of scale as you explore Mesoamerica, try to piece together an ancient myth, discover a lost civilization and of course, save the world. There is something about Shadow of the Tomb Raider that I could not put my finger on at first. Was it the scale of the world and its great attention to detail? Was it the gripping story and its lovable characters, or was it the giant threat that is probably the most deadly in the series to date. I then realized it was a combination of all this which makes for the greatest Lara Croft adventure this decade. 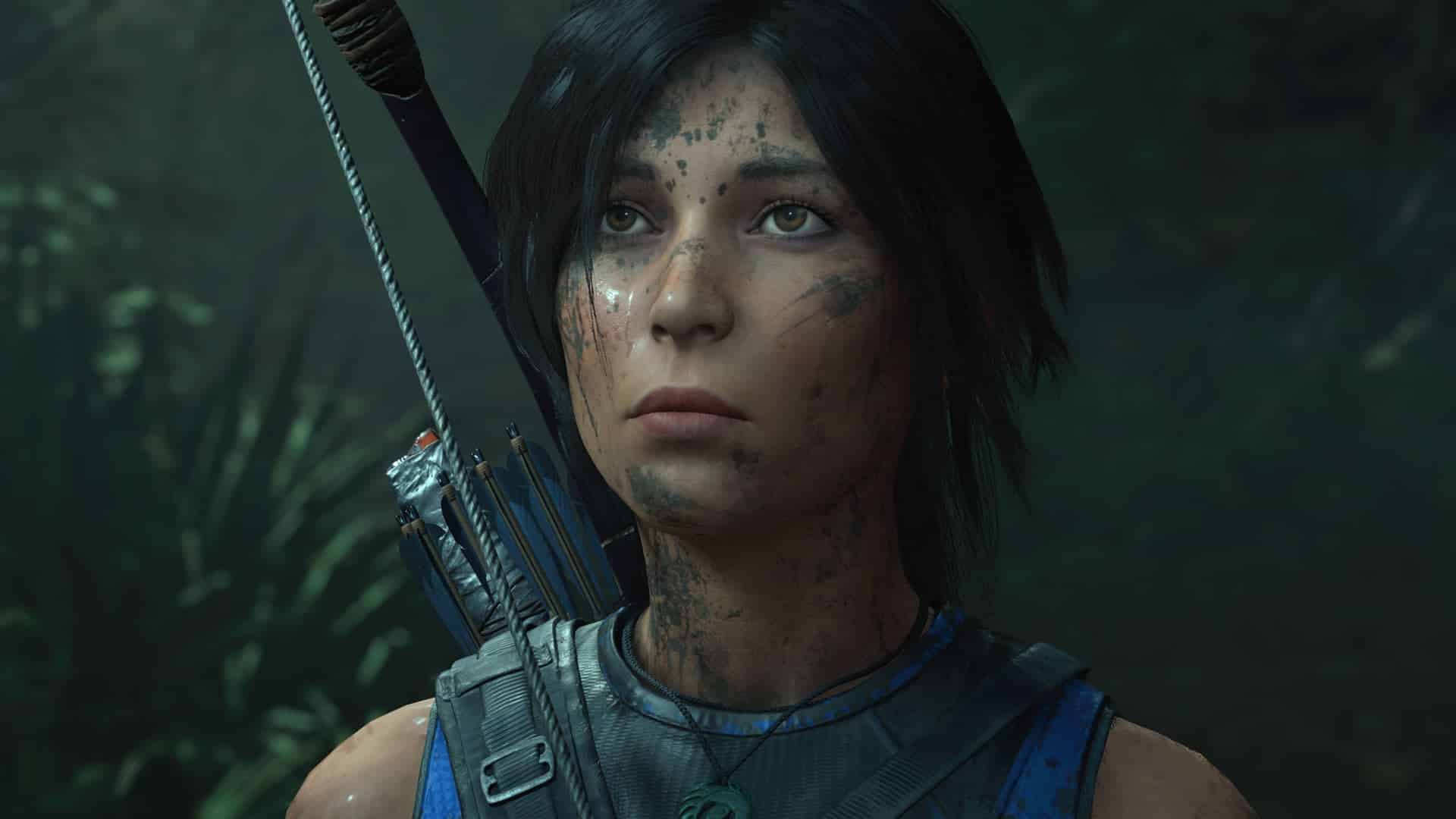 Shadow of the Tomb Raider takes place in Mesoamerica and South America. In short, Lara Croft believes she has set off the beginning of the end in the form of the Mayan apocalypse and she needs to stop it. While that sounds like more of a rat race that is not actually the case. Shadow of the Tomb Raider is a very, very long game in which you see the world slowly decay as you reach the climactic ending. Shadow of the Tomb Raider also acts as a major backstory to not only Lara Croft but the infamous Trinity organization which has been a predominant figure in the series to date. Throughout the game we learn about the origin of Trinity, face the past and the threats they have been putting in place for hundreds of years. All in all, Shadow of the Tomb Raider ties everything up in terms of unanswered questions and of course, the more you read into the plethora of lore discovered in the game, the more satisfied you will be with your knowledge on the series. Lara and Jonah make great companions but the game also has a fair share of supporting roles in the form of the people of Paititi. This city and its people act as a central hub in the game where Lara gets new side missions, buys goods at the local merchants and can even explore the many hidden secrets to gather new loot and crafting materials. Everything that happens in Shadow of the Tomb Raider ends with Lara returning back to Paititi so in a way it is her home base. 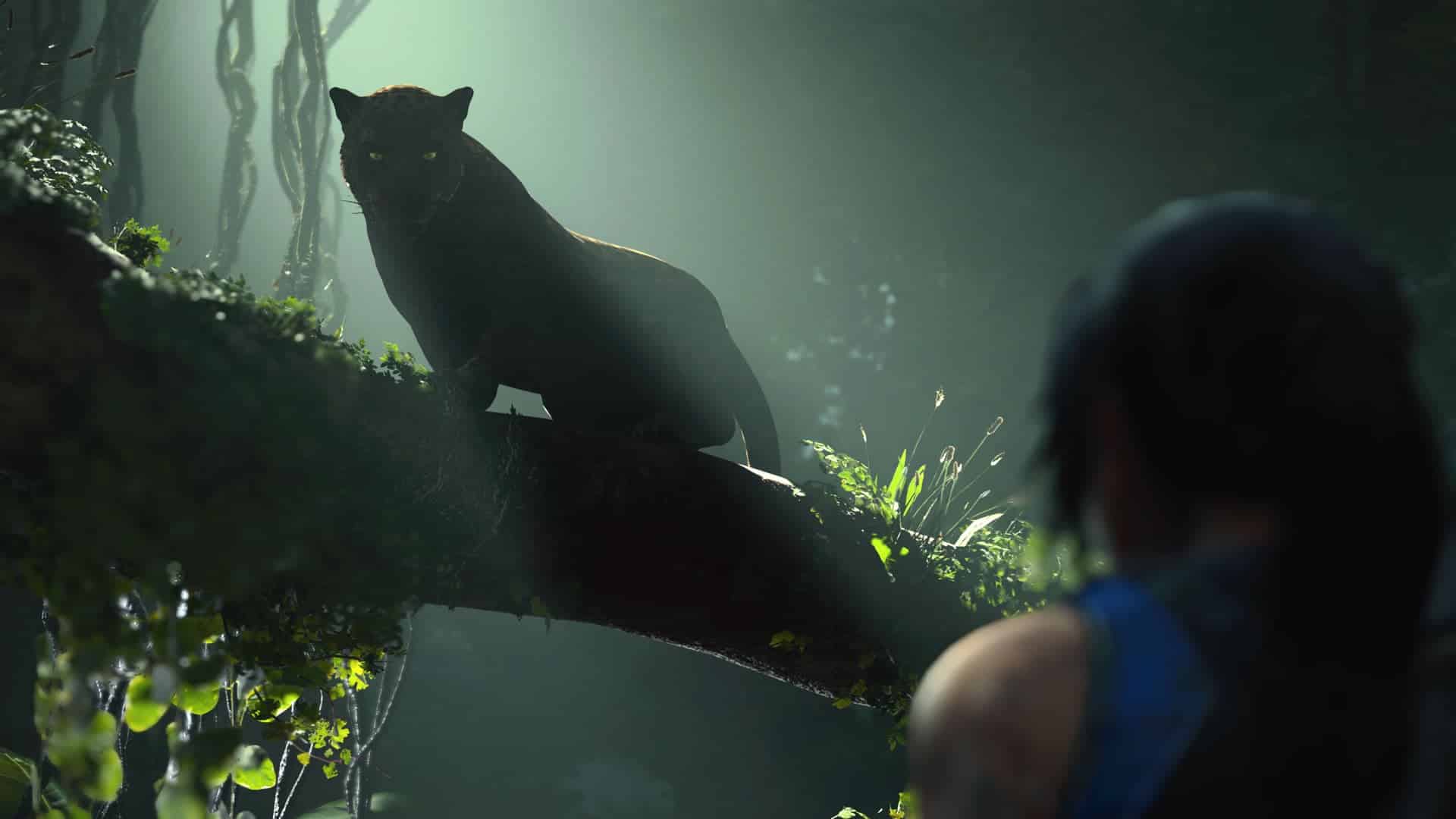 The massive emphasis on the Aztec and Mayan mythologies makes Shadow of the Tomb Raider my most favourite setting to date. I love a game set in a jungle and Eidos created a stunning game with a great amount of detail. Every location is beaming with historical accuracy and every temple feels like it exists somewhere in the world. It is a gorgeous game too with so many “ah this is beautiful” moments that I could not stop taking photos. Not to mention the HDR just brings the experience to life in so many ways. Even the darkest caves littered with human corpses and bones had a strange bliss to it. 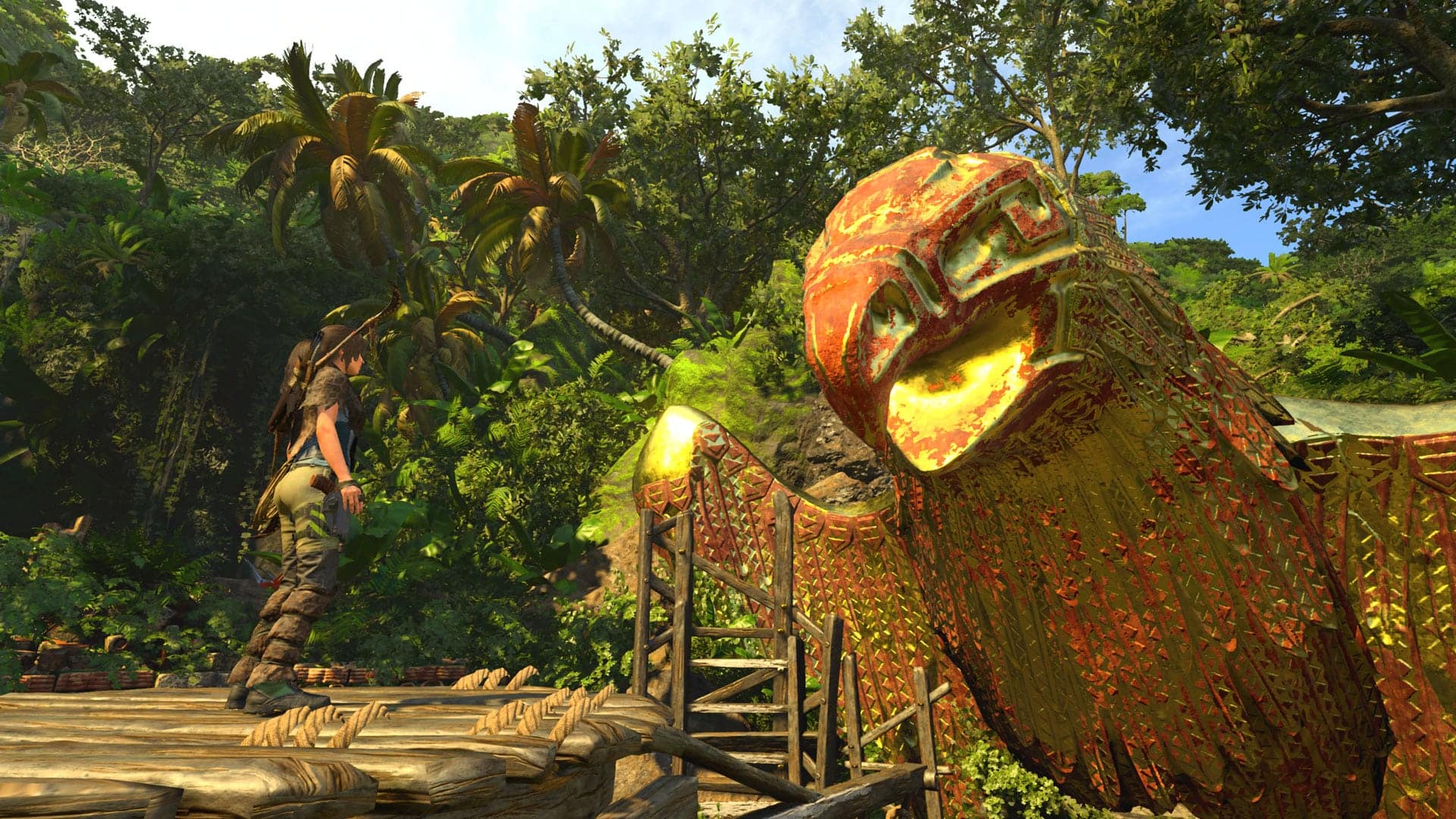 All these great locations make exploring a joy. Challenge tombs deliver great puzzles which you need to complete to unlock rare skills. Some of these were simple like trying to cross a deadly moat of water while rotating mirrors to align a ray of sun with a crystal that moves platforms. Another great one saw me racing through a death trap maze, jumping over and sliding under blades to get to the end before the timer ended. When I was not completing these challenge tombs I was exploring the great jungles and ruins of the Aztec people. Collecting hide to make a new pair of boots, hunting a Capibara for pelt to make a vest or just collecting the many relics and deciphering a dozen totems that provide a great history lesson on the people of the city. Shadow of the Tomb Raider does not push the limit when it comes to exploration. Nothing has changed dramatically since the 2013 reboot and don’t expect any new mechanics in this game either. Lara can now rappel down a cliff and swing from a grapple. This adds a new layer to exploration but once you have done it once, it becomes second nature. However, the locations and sheer variety of them keep the game fresh at every turn. It also pads much of the experience as these extra side missions, challenge tombs and optional collectables add hours of gameplay to the game. The challenge tombs themselves take a good twenty to thirty minutes to complete alone. 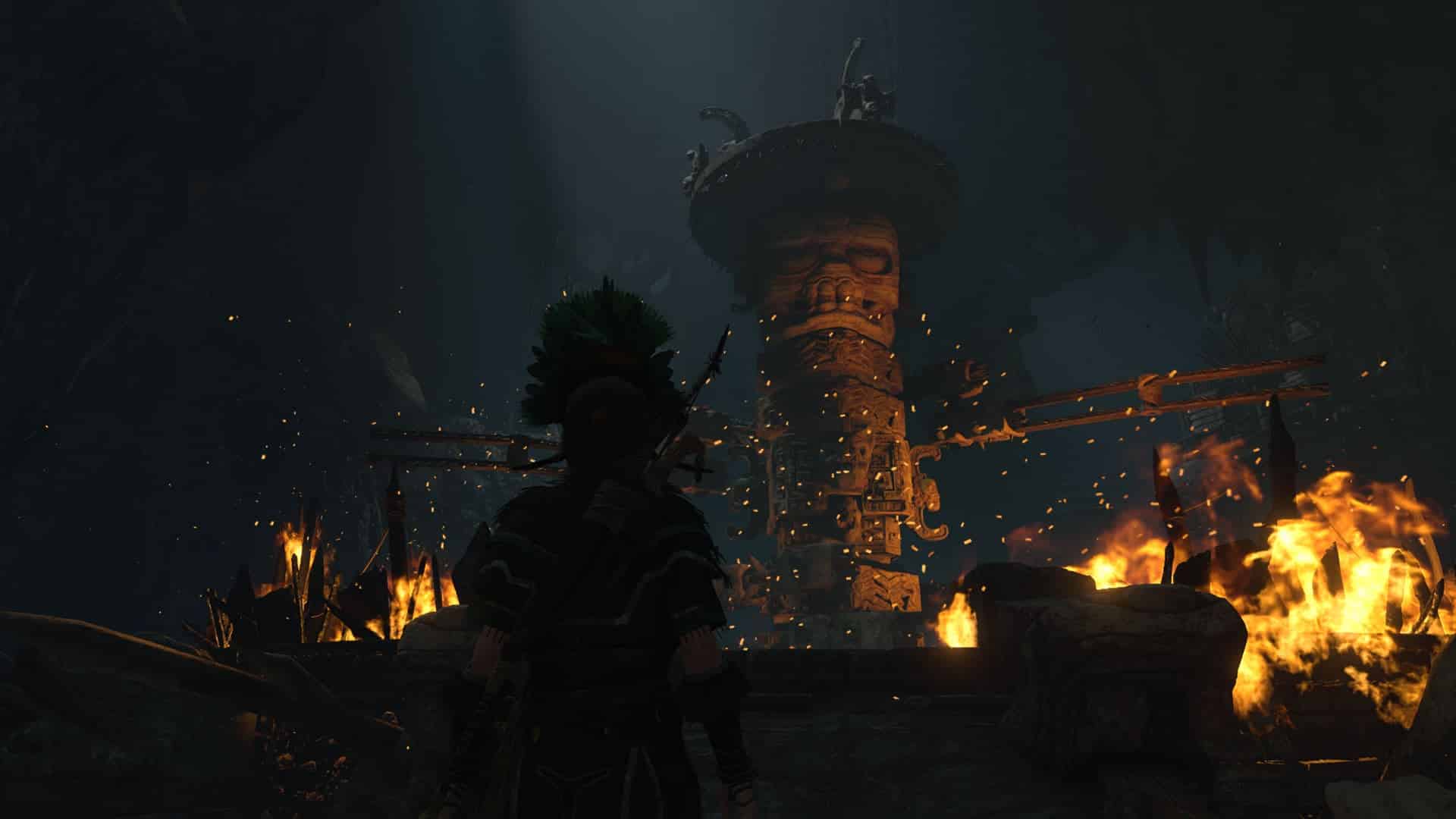 Of course, Lara is not alone on this adventure as she meets crazed cannibal-like humanoids that want her skin, and the fair share of Trinity forces which get in the way of her objective. Lara feels weaker compared to other games for some reason but this helps put a larger emphasis on stealth which has been revamped. Lara can now creep up trees and take enemies down from above and even hang them by shooting them with an arrow and pulling them up to the branch. The most iconic new feature is the ability to cover herself with mud and hug a muddy wall which completely hides her appearance in the game. No really, if I did not know where she was I would not be able to find her. With this in play, she can shimmy across the wall and take enemies down silently and dirty (literally). She even loosens her hair while covered so that it hides her face, a small detail but so clever indeed. Lara can also hide in bushes and do the typical silent takedown. 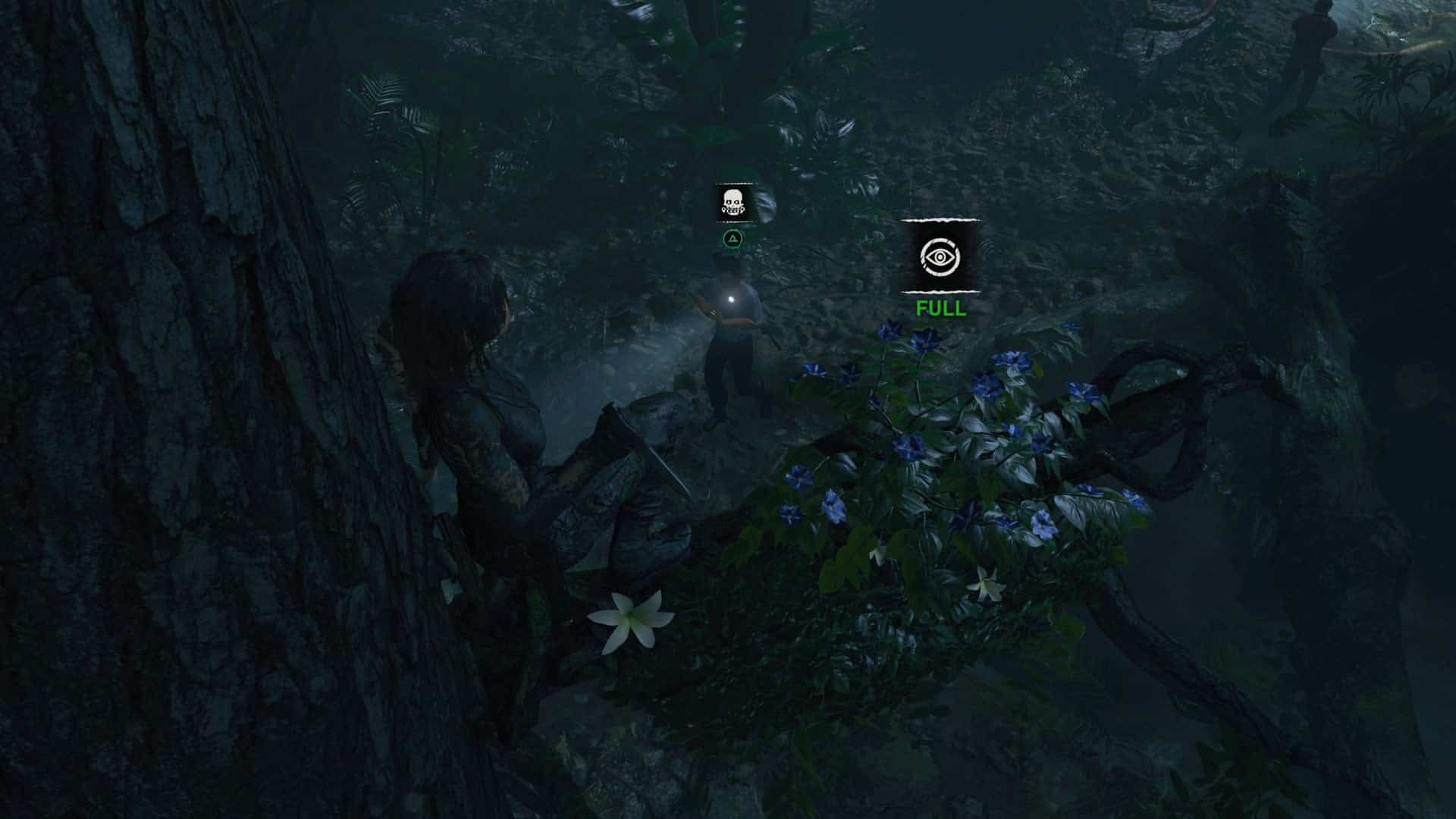 If you are not a fan of being silent then Lara has her trusty bow and arrow and all her arsenal with her to go guns blazing. This is the boring way to do things because other than just holding down a trigger, there is no much excitement here. Different guns and weapons have specific stats that give the weapon a different feeling but it is all just aiming and shooting. It also goes without saying that gunplay is tough. Aiming is extremely slow and clunky making it hard to get those headshots in. I even increased the sensitivity to max and it was very slow and sluggish. I tried to get the trophy for shooting three headshots in a row within 30 seconds but it was harder than it sounds because of this system. 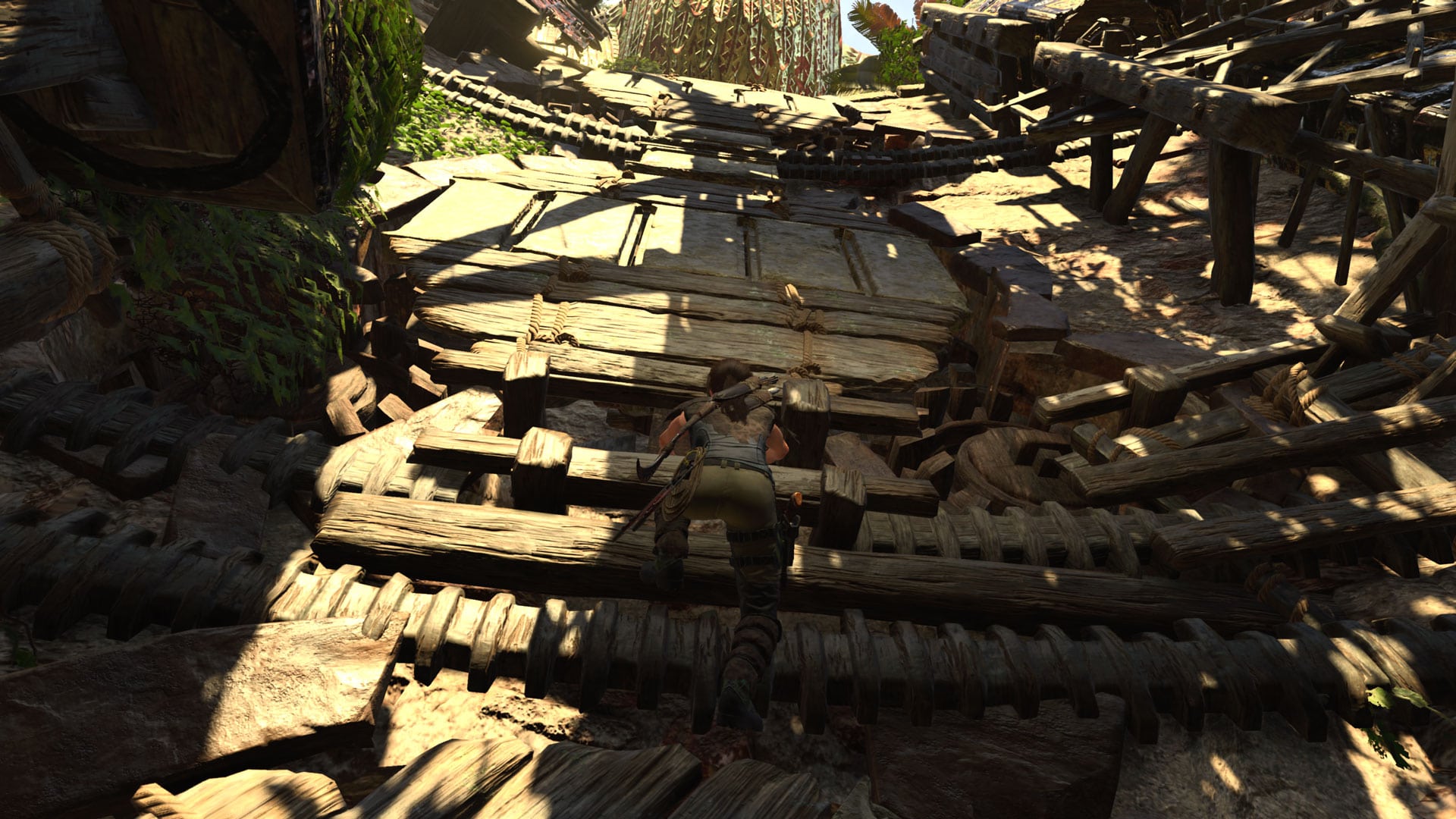 Lara also has a fair share of skills that can be unlocked that grant her buffs and new abilities. She can craft a flower mixture that slows down time while aiming and a skill makes this even more effective. The skill tree is divided into three sections and help with stealth, exploration and combat. Some of these skills make a big difference like the ability to rig a dead body with a bomb. This then makes a sound and when nearby enemies close in the bomb goes off killing them. Some skills also help by increasing the number of materials Lara picks up at a time when skinning an animal or mining for gold. You will prioritize what skills you will use more as you play the game and as you level up by gaining XP by killing, exploring and finding items. By the end of the game, you will have everything unlocked and you will be able to take on the challenges and explore the game without any issue. 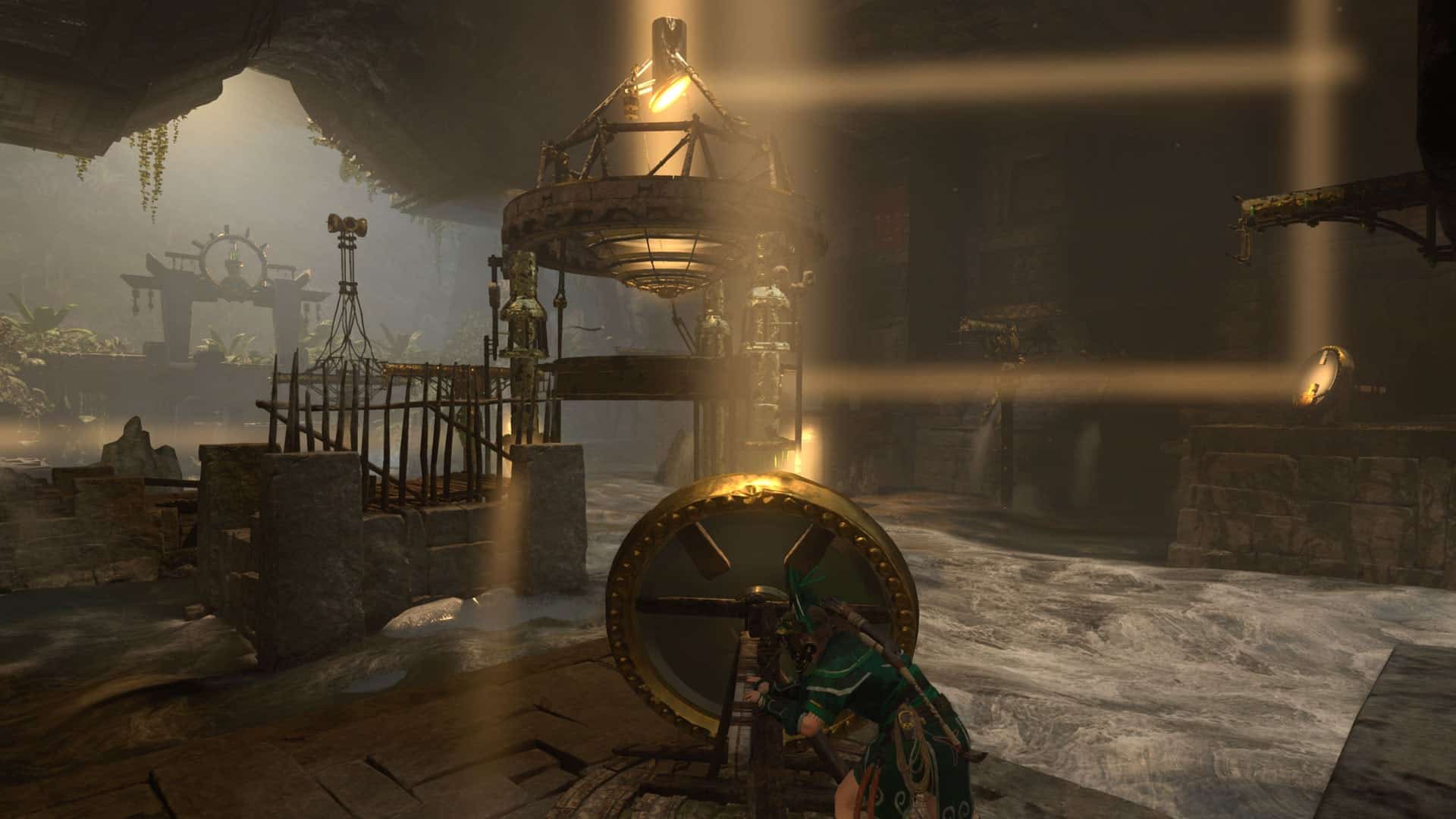 Shadow of the Tomb Raider has a complicated plot to follow but it is filled with the best set pieces I have seen in the series. Within the opening hour, I was being washed away through a town as a giant flood decided to swoop in unexpectedly. It has its Indiana Jones and Uncharted moments which are key to being a successful Tomb Raider game and it does not fail at delivering these spectacular action sequences. Lara is also at her best, shining in every cinematic with her driven personality and obsessed mindset. She also latches onto you from the start with superb facial animations and stellar voice work. There are even a few tears every now and then as you learn more about her past. 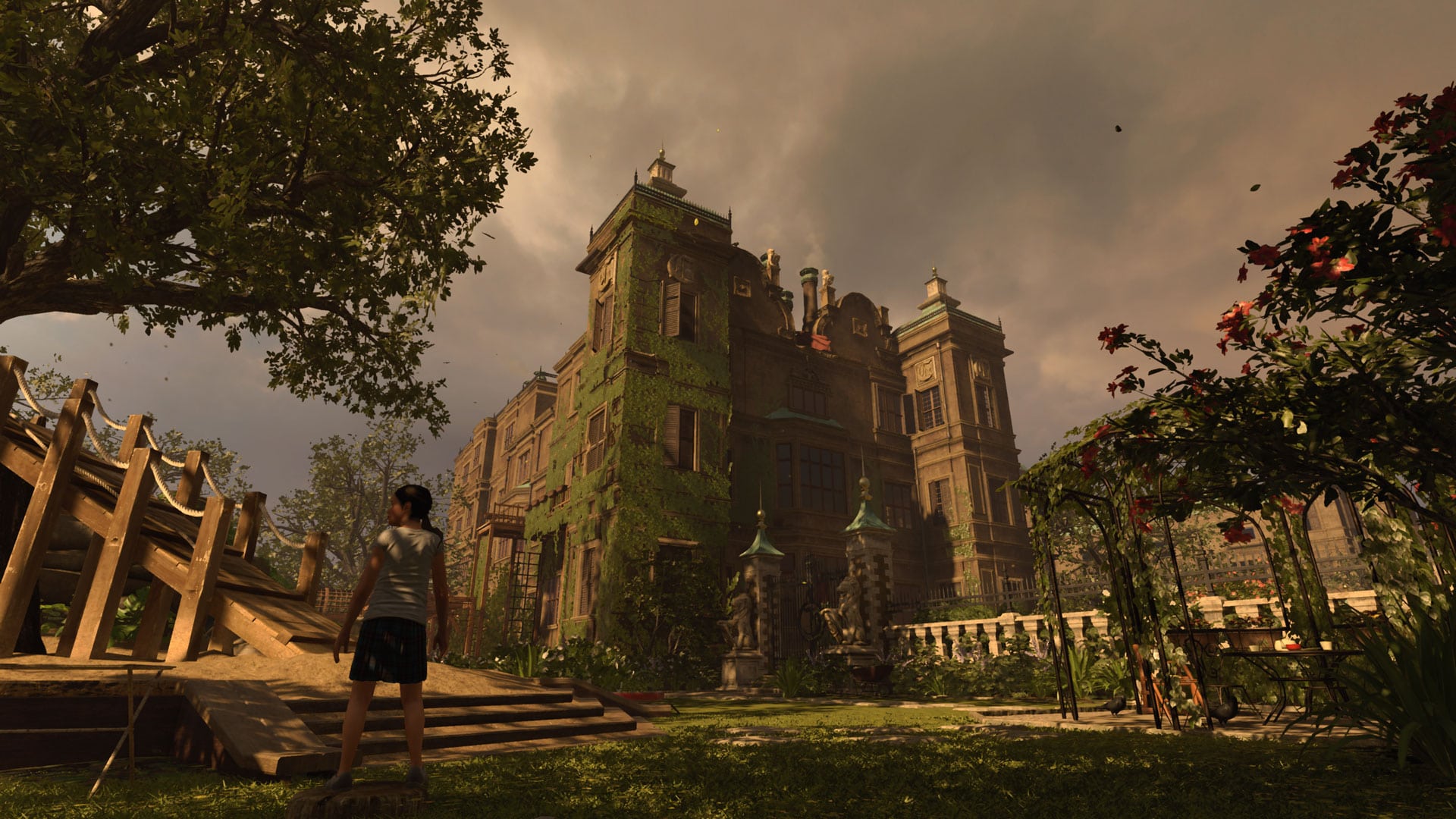 Most of all, the game’s heavy emphasis on side quests makes the padded experience a lot better than ever. These side quests are often divided into multiple parts that see you venturing into a tomb to find something, saving a prisoner from the cult’s grasp or even solving a murder. They provide a somewhat interesting backstory to some of the people of Paititi but the poor voice work and dull character animations fail to make an impact on the player making these quests more side activity rather than a story experience.

Even with its bland side missions, Shadow of the Tomb Raider is a solid 20-30 hour game that kept me exploring at every turn. Its main story is fantastic, its world is immersive and beautiful and its mechanics just work throughout everything it tosses your way. It is the best Tomb Raider ever made and one you don’t want to miss out on.