Shadows: Awakening isn’t your run-of-the-mill Action-RPG and deviates from the norm in multiple ways while keeping the best features of what makes Action-RPGs so addictive.  You still see that glorious explosion of loot when you kill a tough enemy and that always feels good, but there is just so more to the game than just collecting loot, kitting out and levelling up your multiple, diverse characters.

Check out over one hour of Shadows: Awakening gameplay and our thoughts about the game below:

Each character’s soul you consume is basically another class for you to play with, collect items for and level up with unique skills, talents and more. These characters, for example, the Barbarian Kalig (which was the first soul I consumed), who was a guild leader in the game’s main city before he died or a ghoul type hunter creature who stayed by the side of his fallen love.

Each of the characters has their own personalities and as you progress and consume more souls, these personalities start to clash at times. As you run around the world fighting hordes of enemies and collecting loot, they start talking to each other and sometimes even bicker among themselves. 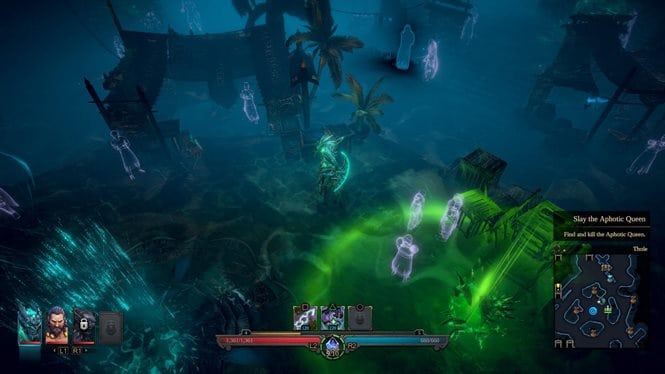 There is never a dull moment here and with superb voice acting in each and every quest, you can just feel how much effort the developer put into creating the experience. The Puppets, their personalities and histories slowly start to change The Devourer as well during the main quest, all because of a mysterious mage that set me on a path myths, legends, betrayal, intrigue and death.

Every so often, you also get to figure out some puzzles that have been designed to challenge the player. It’s a great way to break up the monster-slaying action and forces you to put on that thinking cap, which I thoroughly enjoyed. Some examples include figuring out where to roll a boulder all while dodging projectiles, or in which order to pull levers in order to secure a safe path. 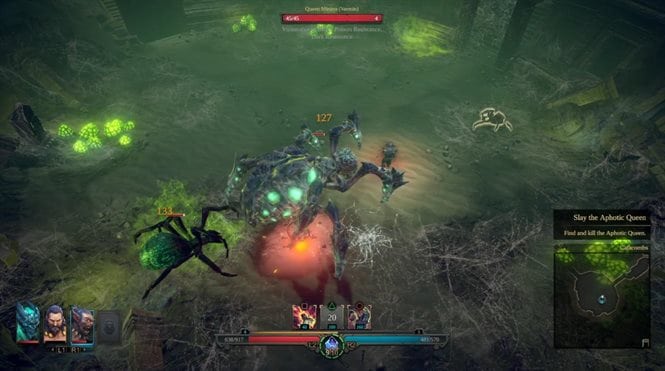 Then, you also have some puzzles that make the game’s Shadow Realm mechanic shine, as you have to remember a specific router over a tile trap in the Shadow Realm, then switch to the Mortal Realm with one of your Puppets and follow the path in the exact order.

These puzzles get more and more challenging and that’s a good thing if you ask me, as environment-based puzzles just feel natural and push you to pay more attention to the world; and it’s definitely a world, or should I rather say worlds, that you should explore in depth. Player choice, world-ending stakes and even the intriguing side quests in between makes for something unique to the Action-RPG genre.

Shadows: Awakening is actually the third entry into the franchise but truth be told, I’ve never played one of the other games before, and I’m regretting that I didn’t. The Heretic Kingdoms is a world filled with intriguing characters as well as stories. The game does a fantastic job to welcome newcomers to this world and I never felt like I needed to play the other two games to get into Shadows: Awakening.

There are also what feels like hundreds of lore books scattered throughout the world and the game’s storyline (which I don’t want to spoil at all) is already fantastic, but these books fill in the blanks for those not familiar with the Heretic Kingdoms. Further, the environment is simply brimming with stories to tell as well, which led me to explore for hours on end. 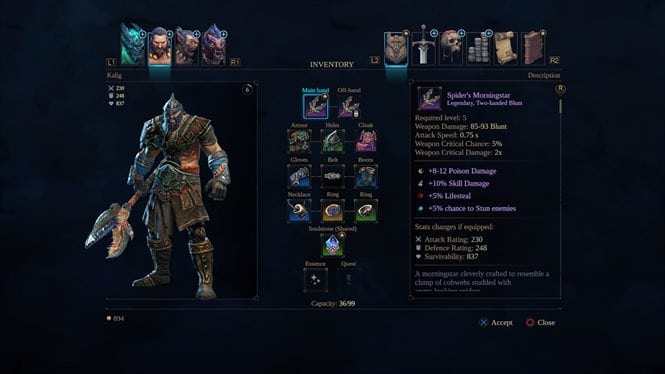 After about 10 hours into the game, the story and my Puppets were all I cared about as I didn’t even think about the admittedly awesome loot. It’s not very often, if at all, where one of an Action-RPGs greatest strength is its story and worlds. 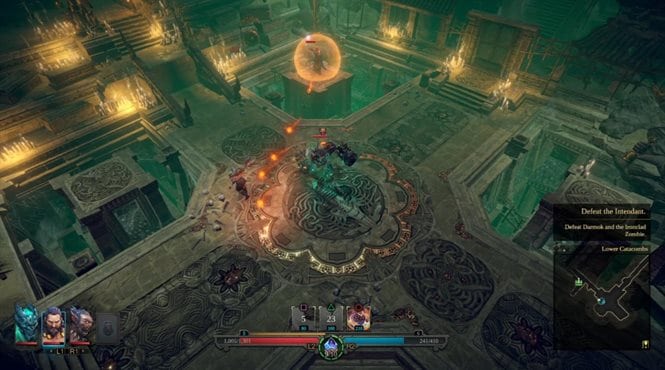 Even though it might seem complicated at first, the whole mechanic started to feel very natural to me. It’s important to switch Realms often, as each realm contains loot, with the Shadow Realm exclusively containing Essences, which you use to upgrade items with various magical attributes, such as resistances and elemental damage types to name only two examples.

Speaking of resistances and elemental damage, some enemies can push out a lot of damage very quickly if you are unable to dodge an attack, but itemizing well before a big fight can save you and your Puppets a lot of pain and death. The item system boasts several qualities and legendary items also have some unique attributes, not to mention they look great and feel fantastic to play with.

Switching between characters on the fly is a smooth experience and you can even combo abilities with one another, for example, I loved using my bone armour skill on the Ironclad Zombie, then instantly switching to my barbarian character, pressing whirlwind and then continue to watch the bodies drop and spill loot all over the place. Another one of my favourites was planting a trap with the hunter ghoul and then unleashing lightning spells with a mage to blow everything up with style. 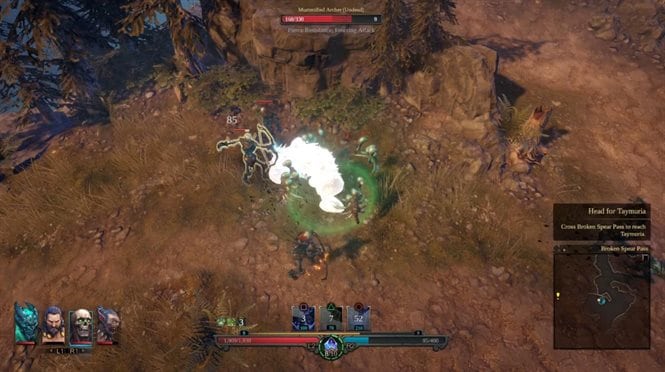 However, it isn’t so easy to drop those bodies as the combat is quite skill-based and challenging, even at the default difficulty level. I found myself having to figure out boss fights and utilize all three Puppets I could command at the same time as well as the Devourer to get through some extremely tough situations, where you need to take the environment, attack patterns and more into account to survive.

The only real negatives I could find while playing the game was some split-second freezes from time to time and unit pathing issues where a few monsters started to bug out on me. However, that’s really nothing when you compare the overall experience and everything the game has to offer, including a great big campaign to play through, then play through again on a higher difficulty, collecting tonnes of loot and having a ball with the two-realm system that works brilliantly.

If you are looking for a game to scratch that Action-RPG itch then look no further than Shadows: Awakening. The game has that same addictive loot collection and fast-paced combat, but sets itself apart in several ways, from the Puppet system to traversing between the realms and even with its deeply intriguing story where player choice matters.

Sure, there are a few issues in the form of a couple of unit pathing bugs and I did experience some split-second freezes during my time with the game. Even so, these small issues can surely be fixed with a patch or two, maybe even a day 1 update. In the end, I can’t stop thinking about the world and its characters, and thankfully there is a lot of replayability to be had after you complete the 20 to 30-hour campaign, since choices matter in this Action-RPG.

Shadows: Awakening is a must play and if you are looking for an Action-RPG, this game should go on your list of titles to grab right now. With all the awesome content Shadows: Awakening provides, it is more than worth its asking price.

This review was conducted off a review code provided to us by Kalypso Media.