It is hard to speak about the Shin Megami Tensei series without directly comparing it to Persona. For those who don’t know, the Persona series was born out of Shin Megami Tensei. While it is hugely popular now, if you truly want to experience the core of the genre then stick to Shin Megami Tensei. With that being said, the two franchises are quite similar. They both rely on a turn-based combat system that focuses on weaknesses and even the same enemy designs. In addition, they both touch on the whole “second dimension” theme that gives us the feeling of a world living alongside humans. Shin Megami Tensei V puts a lot of focus on Demons thanks to its party system and the open-world approach is also refreshing.

Basically, Persona and Shin Megami Tensei aren’t the same thing. Even though they look and feel the same. Shin Megami Tensei V starts off rather confusing but the joy of mystery helps set the tone for the game. I followed my character through a rather typical and boring first day of school. However, at the end of the day, an announcement of the intercom urges students to travel back home in pairs as there seem to be random attacks happening on people around the city. 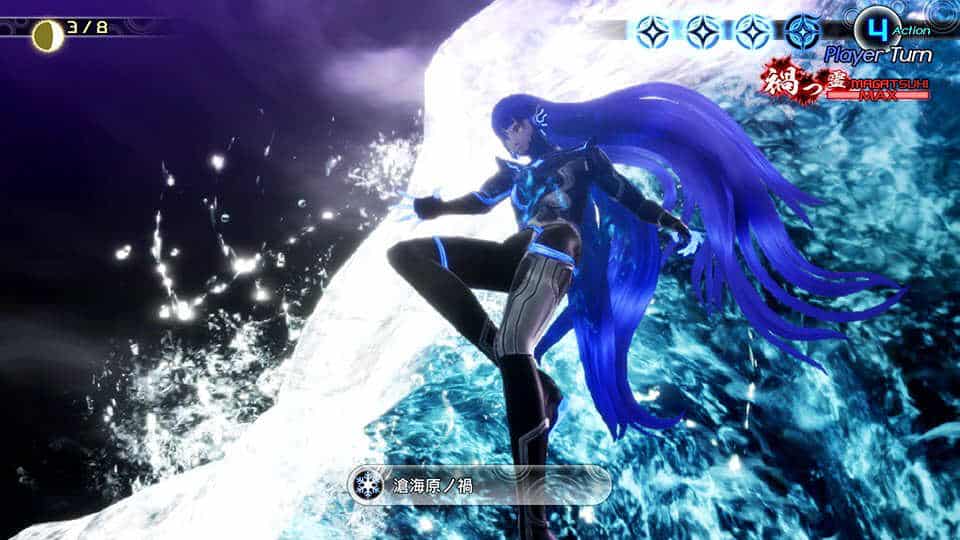 While I was expecting a bit of mystery to unfold here, a few scenes later, the entire Tokyo vanishes and a sand-ridden ruin of broken buildings remain. This world is now inhabited by both strange demonic and angelic demons. While at first, it seemed I was going to be lost in this ruin all helpless and alone, I then met a being called Aogami who fused with my character. I then become something more powerful called Nahobino.

In short, Shin Megami Tensei V is about a journey to discover how Tokyo fell to ruin and what is this link between Aogami and the main character. Along the way, I fought hundreds of demons and managed to “befriend” a few too which added them to my party. While the story in Shin Megami Tensei V is a slow-burner, I enjoyed how it unfolded. I also think it goes a long way to try and put the main characters in front of things and explore the narrative surrounding them. 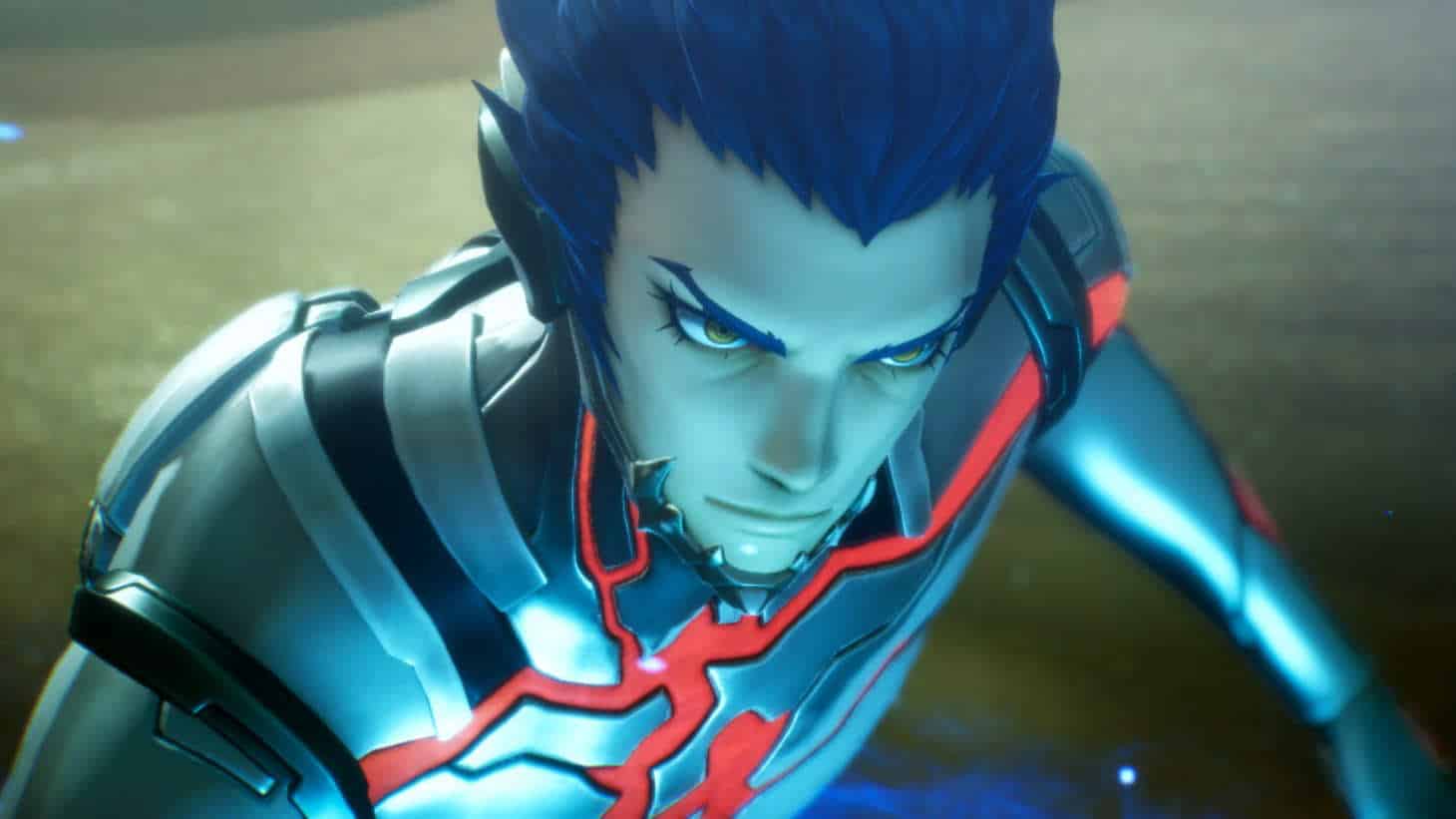 I didn’t meet any characters that I felt were poorly written. It also helps that many of them are demons and somehow, Atlus has managed to flesh these characters out enough to make them feel believable. Shin Megami Tensei V is also a dark game with a lot of its themes touching on some rather uncomfortable stories and topics. Given how the majority of my time spent in the game was done running around in the world, the story moments make up for the slower pacing of the game in-between the action.

Atlus also wants you to spend a lot of time exploring the world and experiencing the dungeon crawler gameplay. The world is large and each area has enough side paths included to keep you busy. I never got lost because the world isn’t that detailed and expansive. However, there’s still a lot to do and things to pick up along the way. The game is also filled with some interesting side quests that made sure to send me to places I would usually stay away from. I also knew I was on a path towards a treasure chest or something interesting when I spotted Magatsushi energy balls in a specific area. These helped refill my MP, health and Magatsushi energy. 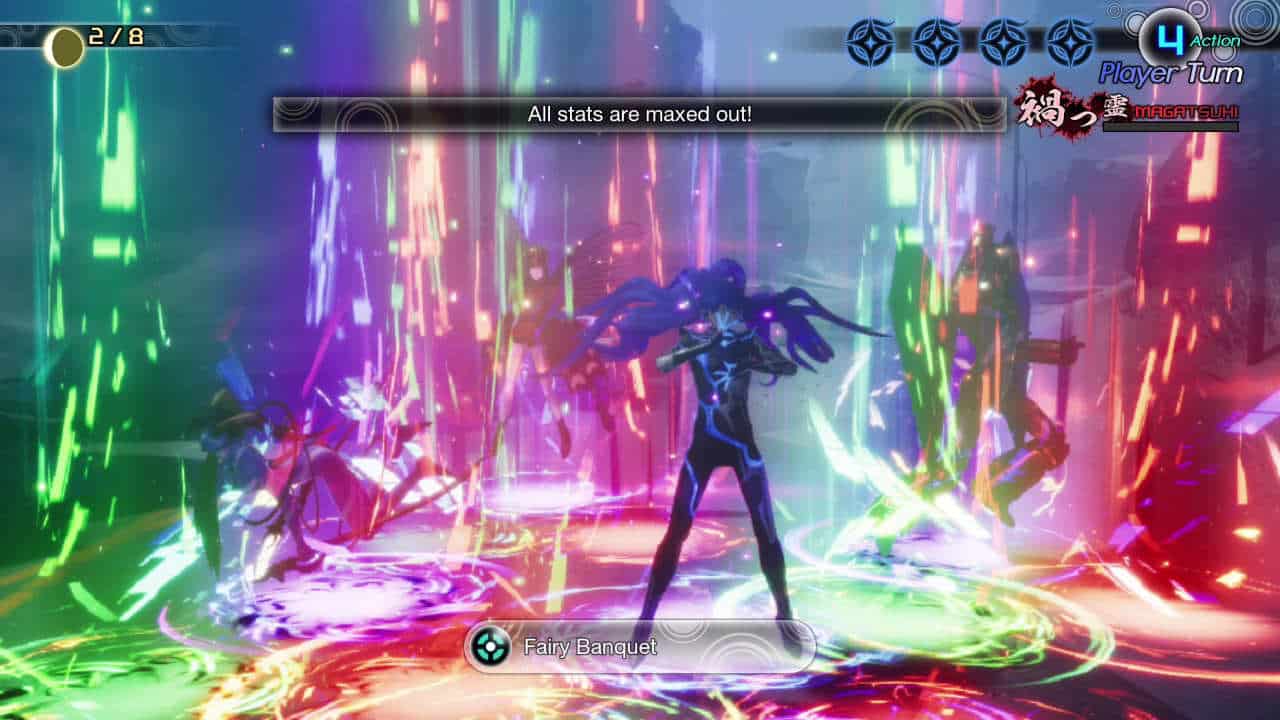 Much of the Shin Megami Tensei V experience revolves around demons known as Miman. There are around 200 of these demons in the game and you can collect them all while exploring the world and completing side quests. Then we have the demons. Demons in Shin Megami Tensei V can be recruited and added to your party for combat. The combat follows a traditional turn-based approach that sees each demon attack during the turn. If you have played Persona before, you will know how this works and how the weaknesses make the combat rather exciting.

Hit a demon with a weak element or attack type and you can attack again with another party member. Do this enough and often I could walk away from a fight without the enemy team even getting a chance to retaliate. However, there’s also the risk of the same thing happening to me if I missed an attack or got the weakness of the enemy wrong. 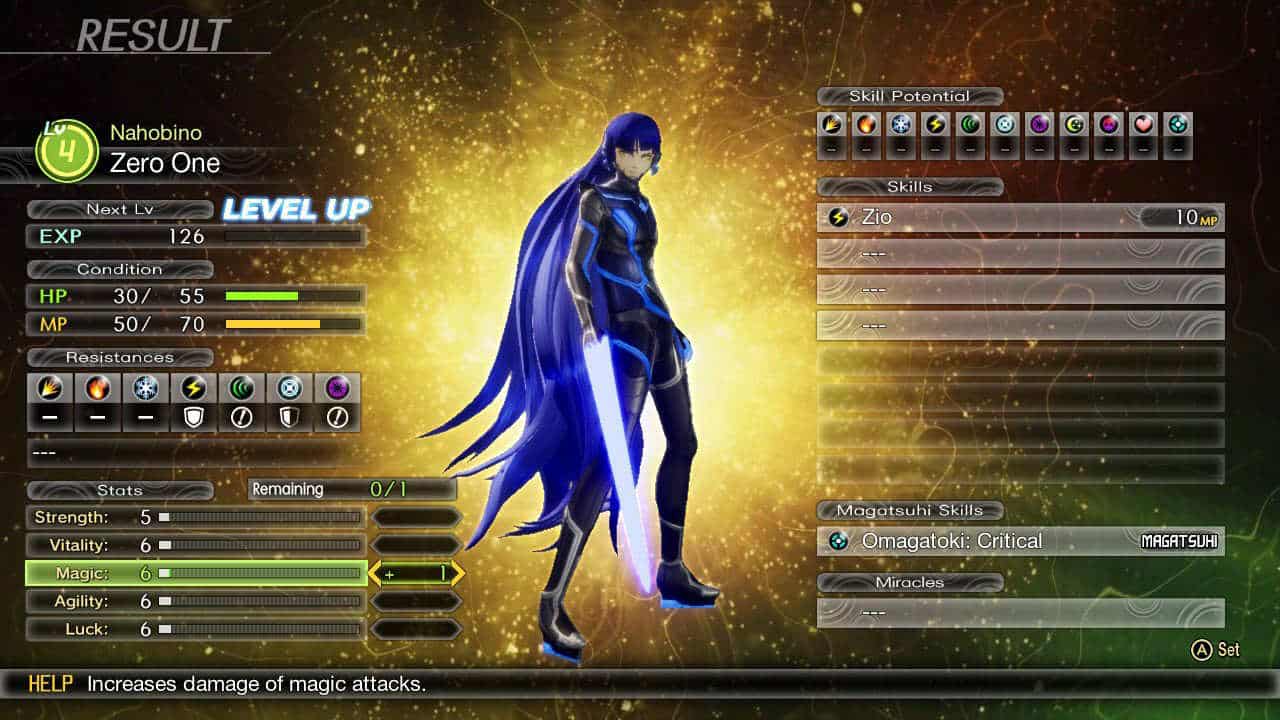 The combat system can get a bit repetitive after a while. But I countered this by changing up my party and approaching enemies with different tactics. That is to say, most turn-based RPGs suffer from repetitive combat and this is no different. Sadly, Shin Megami Tensei V does get a bit tedious after a while. Especially in the late game where enemies are chunkier and areas a larger with more of them around.

There’s also a new system in Shin Megami Tensei V called the Magatsushi Gauge. This gauge fills up throughout the battle and by performing attacks. Once it fills up, you can then unleash powerful attacks. Best of all, each character and demon packs a specific set of these cool attacks. So it was always exciting to see what attacks a new demon or character had with them when the time came. 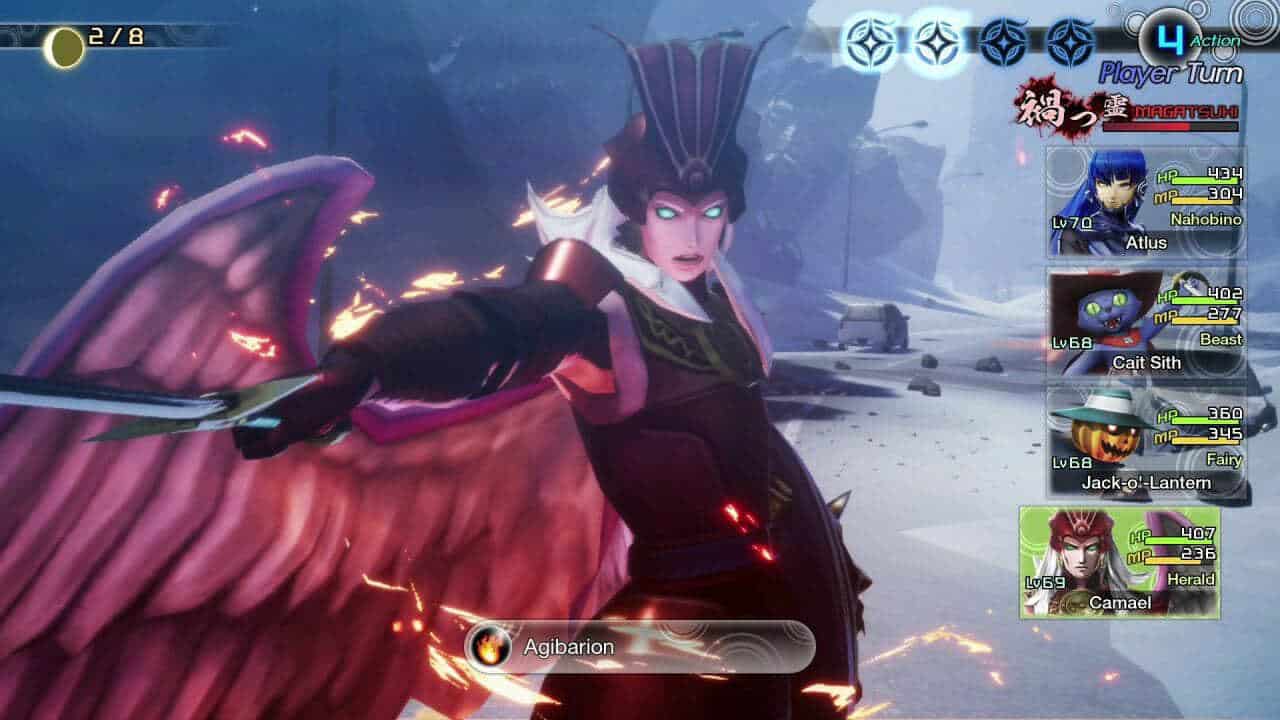 Speaking of getting new demons, Shin Megami Tensei V still relies on its clumsy negotiation system to obtain new fighters. This means that a specific attack would trigger a chat between the demon and my character. I would then have to reply in a specific way to impress the demon and get it to join my team. Demons can also run away during this chat and even refuse to join but leave behind health orbs instead. It is not the best way to recruit demons and can get annoying at times.

Thankfully, once I obtained a demon I then owned it for good. I could pay to summon it even after blending it together with another demon to create something new. The system works pretty well. I could create new demons by merging two together and even make some stronger by carrying over abilities I mastered before the merge. The system also gets more exciting as the game progresses. The later I got into Shin Megami Tensei V the more demons I could make and the more powerful they came out. 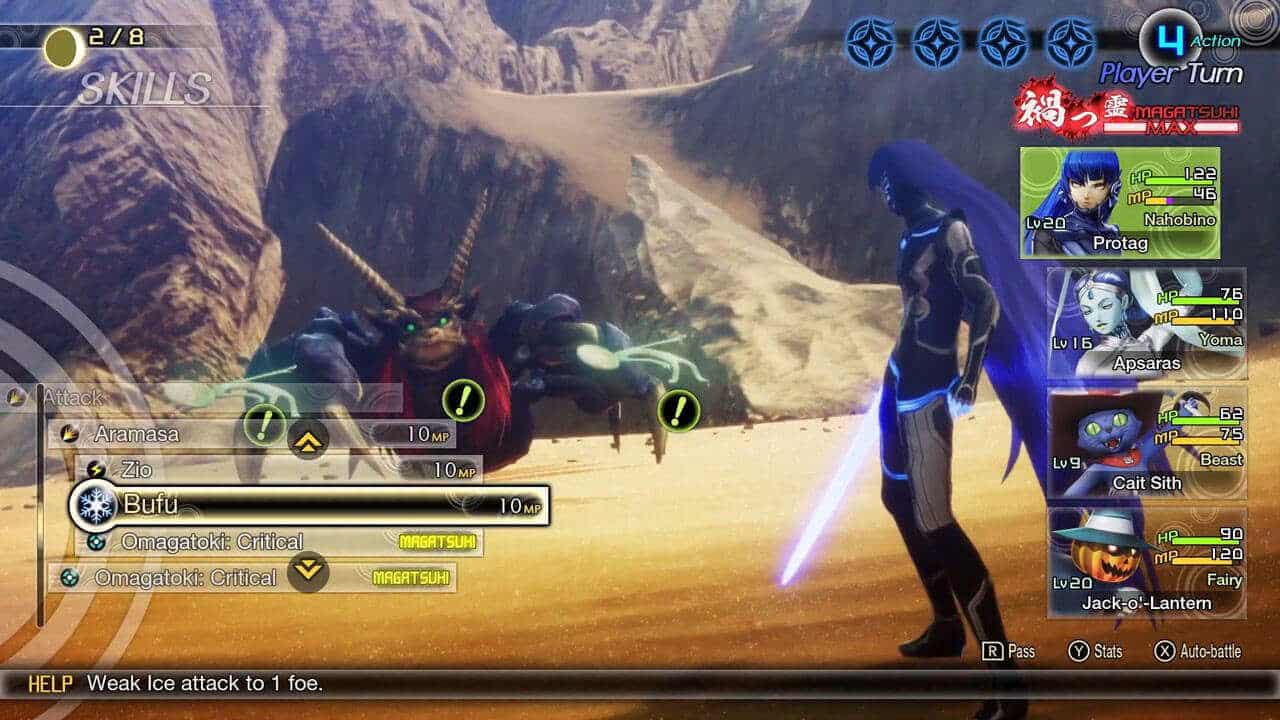 As for the Nahobino, the skill system works a bit different here. Instead of learning new skills through demon merging and summoning, I earned them by levelling these demons up and unlocking essence. This Essence often came with some new skills to learn but I could also choose to throw it out if need be. The Nahobino is also upgradeable through a currency called Glory. Here I was able to unlock permanent passive skills to slowly build the character I wanted.

If you played Shin Megami Tensei back in the day, this entry will feel familiar. If anything, it hasn’t aged as well as I hoped it would and still doesn’t feel as modern as I expected. With that being said, fans of the series will love this title. It does enough to offer a unique experience thanks to a few new mechanics across the board.