It is not an easy task these days to pry your kids away from the TV, phone or tablet. If anything, kids really don’t interact with enough around them like they used to. It is all about TikTok, YouTube and even WhatsApp groups. Because of this, I try and find ways to keep my tech-savvy nieces busy outside of electronics. Games outside help a lot but new toys are especially effective. It is even better if these toys challenge their minds and fingers along the way. This is where Snap Snips come in. These new modular space crafts aren’t as complicated as LEGO to build and come with some pretty stylish designs that encourage kids to follow instructions and afterwards, break everything up to build their own unique models.

It is hard to not compare Snap Ships to LEGO because most of the experience building them feels the same. However, instead of using dozens, if not thousands of simple blocks to make something cool, you’re using specially-designed parts here. The Snap Ships range boasts modular components that rely on square blocks with star indentations in them. Every ship is built around a series of these square blocks and kids can then take the other parts and place them around this base.

As a result, you then have the freedom to create your own cool ship using a range of parts. Of course, at first, you will want to follow the instructions included in each Snap Ship you buy. Inside the box, you’ll find a detailed step by step guide on how to create the ship and a variation. The instructions readout like LEGO and following them is simple enough. My niece, who is 11 helped with our first build. 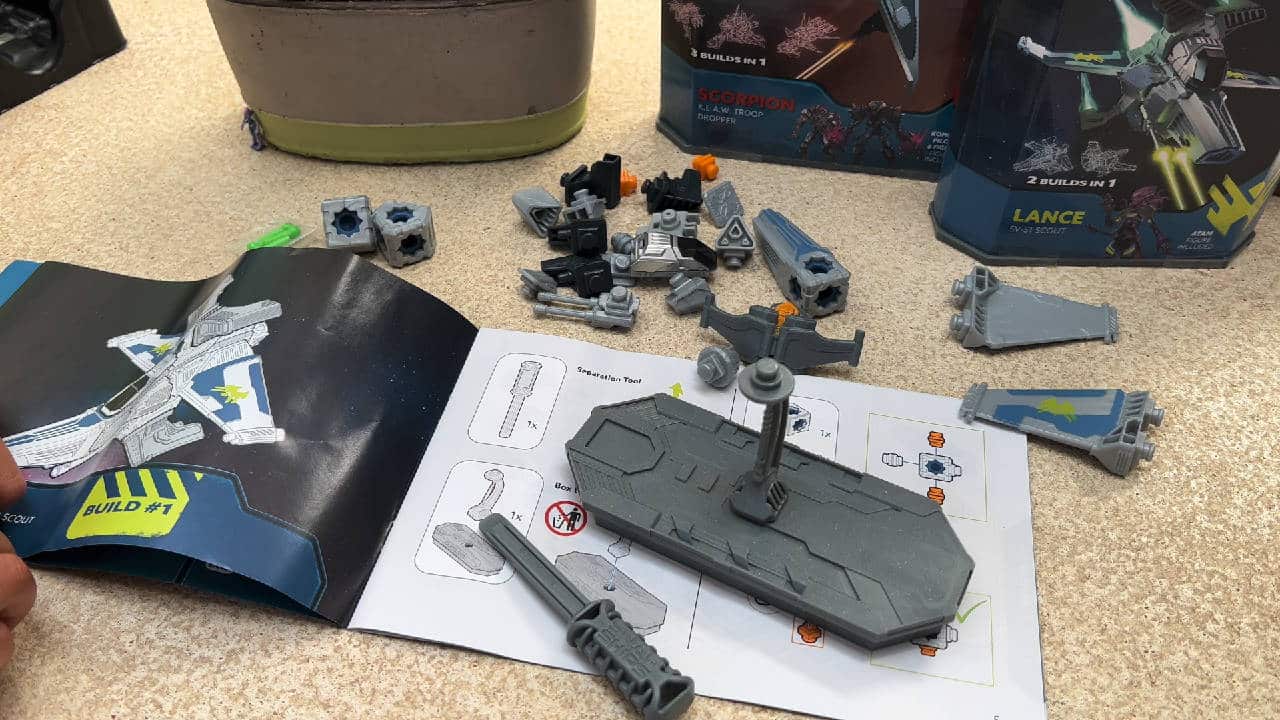 Our first ship is called Lance and came with all the parts we needed. There’s also a pry tool to help detach the blocks if you want to remove them. Inside each box, you will also get a tiny (I really mean tiny) character that sits inside the cockpit. My niece loved this character. He not only hid away all snug but his tiny design puts the ship’s scale into perspective. If anything, you would not know the actual scale of the ship without comparing this alien to the body.

The general building of the Snap Ship Lance was simple. It took only 10 steps which are nice and short. Afterwards, my niece had a general understanding of how to remove a few pieces of the build to replace them with a functional missile launcher, AT-Turret or maybe a simple metal slab. The Lance came with some additional parts that are usable across the ship. It encourages kids to swap things around.

The second ship was just as easy to build as the first. However, it meant taking everything apart which is the longest process. A few minutes later and we had a whole new ship using the exact same parts as the first. I was also impressed to see how different this ship looked in comparison. PlayMonster really put thought into these alternate builds. Even though the second Lance ship didn’t clearly state we could use the missile launcher, which relies on shooting small missiles that can get lost in seconds, we used it anyway. We then decided to really go to town on our own custom ship and created something entirely different using the same parts. Think Star Wars bomber ship meets Snap Ships. We thought it was pretty cool. Would it fly in real life? Probably not.

PlayMonster sent us another giant ship that we have yet to tackle. Since my niece and I opened this one up, she has enjoyed deconstructing and constructing new versions of the ship. She has also dived into the story of Snap Ships too. There’s a whole alien war going on in the series and the two types of fleets you can purchase are fighting one another. You get The Forge fleet and The Komplex fleet. The Forge is recognized by its grey design and The Komplex feature black and red designs.

There’s also an AR app that let’s you see the ship in real life. The app has a range of shooting challenges that kids can enjoy too and is a great way for kids to determine which ships they like before you go out and buy them. We will touch on that in a future post. We will be sharing more details on the second build soon and hopefully, how users can take different parts from each purchase and create even bigger fleets.

Snap Ships are now available in South Africa. The Lance ship we covered here sets you back R399. The larger Drop Ship models cost around R899. You can pick them up at most participating toy stores. You can find out more about Snap Ships here.