Sniper Elite V2 Remastered once again puts players in the boots of Lieutenant Karl Fairburne, a skilled sniper thrown into Berlin in 1945 with an important mission. This mission references Operation Paperclip, which was basically a plan by the US to recruit Nazi scientists. Karl needs to take out those scientists who defect to mother Russia and it all revolves around the V-2 rocket program and the scientists familiar with this program but things do not go exactly as planned.

If you would rather watch the game in action including some grizzly X-Ray kills, then check out our video review below.

Rebellion first rebooted the original Sniper Elite with Sniper Elite V2 in 2012, so Sniper Elite V2 Remastered is basically the original V2 with upgraded graphics, including beautiful HDR support. The story, therefore, has been out there for a very long time and by today’s standards, it is still pretty good especially if you are a World War II history buff.

You move to various locations to complete a bunch of objectives, but mostly it all revolves around making it to a specific point, sneaking past enemies or taking them on in an open firefight, then completing an objective such as blowing up a bridge and either defending your position or getting out of dodge. There’s even an escort mission thrown into the mix that does have an instant-fail aspect, which adds a bit of diversity to the gameplay. 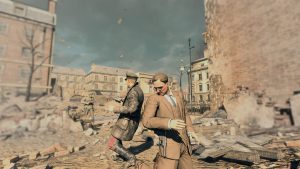 Graphically, the game has been improved greatly, from HDR support to options to favour resolution or frame rate. Explosions and lighting look much better and it adds another layer of atmosphere as you move through the maps, with my personal favourite being an old church as bombs drop from above. You have an option to select either “favour resolution” or “favour frame rate” and although the game looks better with the resolution option, I went for frame rate for that smoother experience.

Gameplay remains the same as the 2012 Sniper Elite V2 and it can still deliver some stellar moments. You can place traps, for example, trip mines to secure your position. You can also place a mine on an enemy’s body, or even drag a body out of sight. You have a lot of options to use for stealth gameplay, including a silenced Welrod pistol and you can also use environmental sound to your advantage by waiting for a loud sound on the map and then sniping an enemy. Stealth, however, suffers a bit because at times, enemies just see you for no apparent reason. At other times, the game’s biggest issue that I experienced breaks the immersion completely. 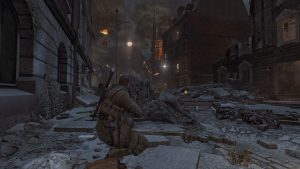 The AI in Sniper Elite V2 Remastered hasn’t been improved at all and it could arguably be worse than the 2012 version. Enemies are just plain stupid at times, run into objects or in the opposite direction of where the player is. One enemy was shooting at me so there was clearly something going on, but another was just standing there in his relaxed position as if nothing was happening. Throughout each map of the story this continued, with enemy AI simply not being good enough for any type of real immersion to sink in.

Then, especially in the narrower maps, things break away from the stealth gameplay and the game turns into a pop-up and shoot affair. In a way, it is nice that it isn’t an instant-fail stealth game (except for the escort mission), but these sections where you just move out of cover and shoot one enemy in the head, over and over again, does get boring. The game suffers from these same issues as the 2012 Sniper Elite V2 did and with the inconsistent pacing in missions and in level design, it is hard to justify with today’s gaming standards. 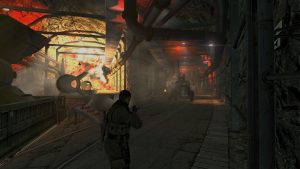 What isn’t boring, however, is the awesome X-Ray kill shots. This is without a doubt the game’s best feature and it shines through with the remastered graphics. There’s even a menu option that you can enable that increases the frequency of these X-Ray kill shots occurring and it is simply so satisfying to watch that I could do it for hours and hours on end.

The X-Ray kill shots show the bullet travel in slow motion, puncturing an enemy’s body and hitting a vital organ such as their heart or brain. The further away you are from your target and the more devasting the shot, the more points you get so you can climb those leaderboards. 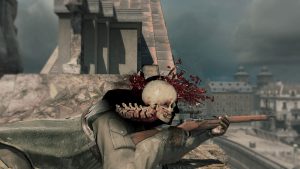 This feature is more brutal than ever thanks to the remastered graphics and I would probably enjoy a game that you can just sit there and hit X-Ray kill shots over and over again.

If you are playing Sniper Elite for the first time, then Sniper Elite V2 Remastered could be a great starting point. As a remaster, Rebellion has done enough in terms of graphical upgrades, but there are some issues. The AI is extremely dumb, movement while running feels stiff and the game at its core still feels like it suffers from an identity crisis as level and mission pacing is inconsistent. At one point you are sneaking around and the next it feels like you are in a pop-up and shoot third-person action game like Gears of War.

However, the X-Ray kills are as grizzly as ever and an absolute joy to pull off. The bullet ballistics shine through and when everything clicks, the game just feels great to play. In Sniper Elite V2 Remastered, all those DLC including the one where you get to hunt down Hitler extends the eight-hour campaign experience as well. Unfortunately, I couldn’t find a server to test the multiplayer, but everything from the 2012 Sniper Elite V2 is apparently included.

Sniper Elite V2 Remastered is a robust package, but I can’t help but feel as if some of the gameplay issues such as poor AI and pacing, could and should have been greatly improved.