The original SpongeBob SquarePants: Battle for Bikini Bottom was an iconic game for its age. Originally released in 2003 for PS2, Xbox, GameCube and PC, the game delivered some fun and accessible platforming gameplay bringing the world’s favourite sponge to life in a new way. Almost twenty years later and SpongeBob SquarePants: Battle for Bikini Bottom – Rehydrated is here. A complete remake of the original game with some added content that was cut from the 2003 release. I was a massive fan of the PS2 game. I remember playing it non-stop as it was a love letter to fans of the SpongeBob SquarePants series.

Fast forward to 2020 and we have a direct remake of the game. Developed by Purple Lamp Studios and published by THQ Nordic, Rehydrated is built from the ground up. With that being said, it’s as true to the original game as possible. Vibrant and colourful levels to complete, quirky story dialogue to listen to and most of all, everything SpongeBob SquarePants.

Who lives in a pineapple under the sea?

To think that the original animation debuted back in 1999 and the characters I met in Rehydrated were still as lovable and have not changed one bit ever since. Plankton is still up to his no-good scheme, Patrick is still not the sharpest tool in the shed and even Mermaid Man still has than starfish stuck on his face. We then have Spongebob himself who brings the classic humour and charm to the game.

Nothing has changed here in terms of the story. SpongeBob SquarePants: Battle for Bikini Bottom – Rehydrated follows Spongebob and his friends as they try to defend Bikini Bottom from an invasion of robots. Of course, Plankton created them all using the Duplicatitron 3000. This sets Spongebob, Patrick and Sandy off on a quest to put a stop to these robots (and do a load of other crazy and non-related objectives that make no sense at all).

Absorbent and yellow and porous is he.

The gameplay is simple and the game follows traditional action-adventure mechanics. If you were around for the PS2 you would know that hundreds of these sort of games released. In addition, anyone who played a Spyro or Crash Bandicoot game will feel right at home. I spend most of my time running around levels collecting items, breaking Tiki boxes and smashing robots. That’s basically all you do. However, its fantastic level design that truly makes Rehydrated shine. It also helps that you visit iconic areas from the animation series. It was great to glide across the rooftops in Downtown Bikini Bottom and run through Jellyfish Fields smacking robots. Not to mention the boss fights which are simple but fun to complete. 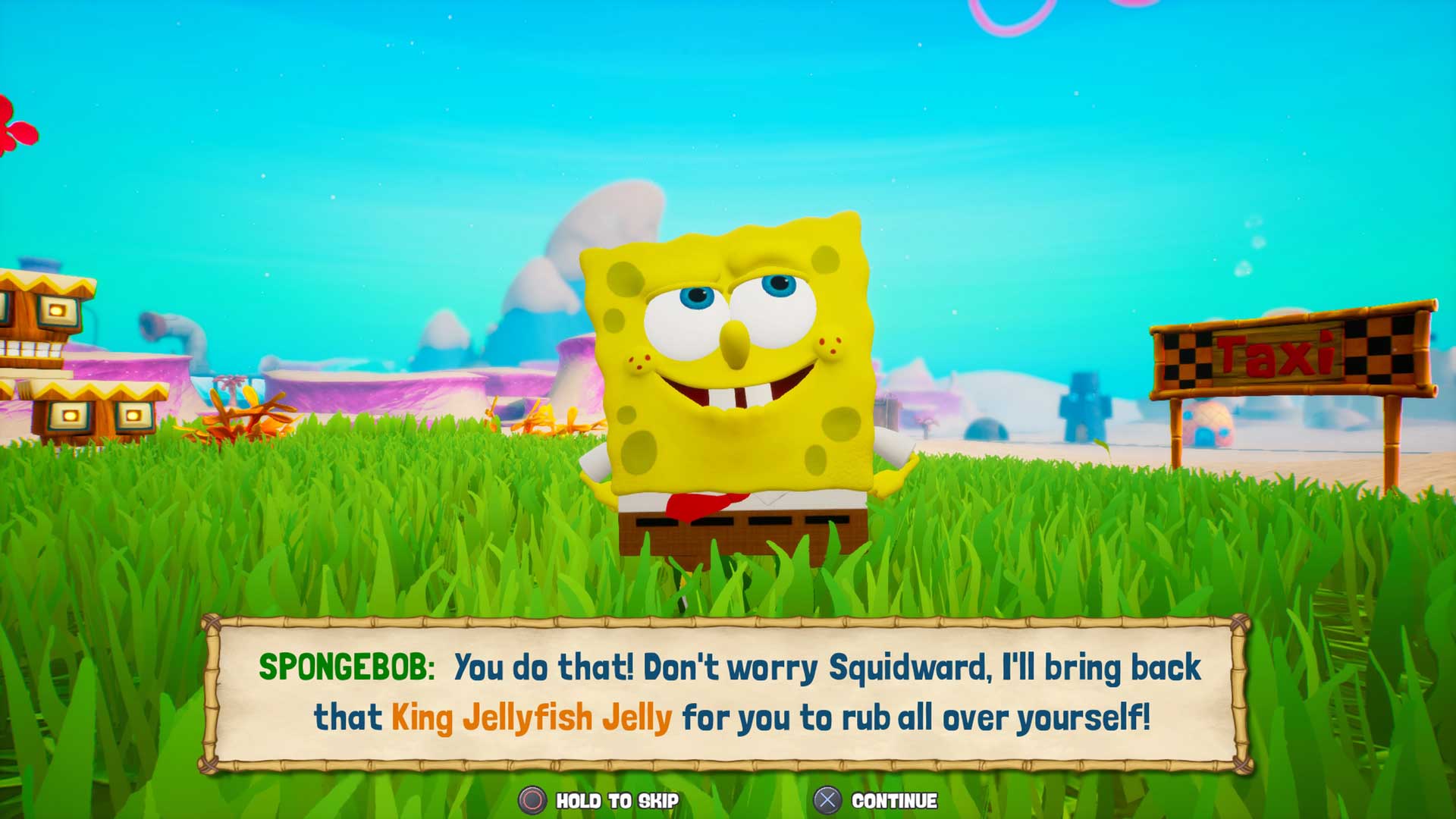 Progression is held back by how many Golden Spatulas I had collected in the various levels. Each stage has a select number of them to find. This could be through exploration, quests and even using certain abilities like the Bubble Bowl to hit switched by bowling a bubble at them. Without these items, you can’t progress. It makes exploration key in every stage. Even after I completed the game, I found myself loading and going back to early levels to find the missing spatulas. At the same time, you can collect Shiny Objects which acts as the currency in the game. This can be spent at Mr Krabs to unlock even more Golden Spatulas.

If nautical nonsense be somethin’ ya wish.

Each of the three playable character have their own unique playstyle. Spongebob is the most detailed and can unlock new abilities such a SpongeBall and Cruise Bubble. He is also the only character that can sneak up on disappearing Tiki boxes. Patrick is the only character that can pick up an object and throw it. Sandy can glide across gaps by using her lasso as a helicopter. Yes, it makes no sense but it works just like none of the characters can swim in the water under the water. 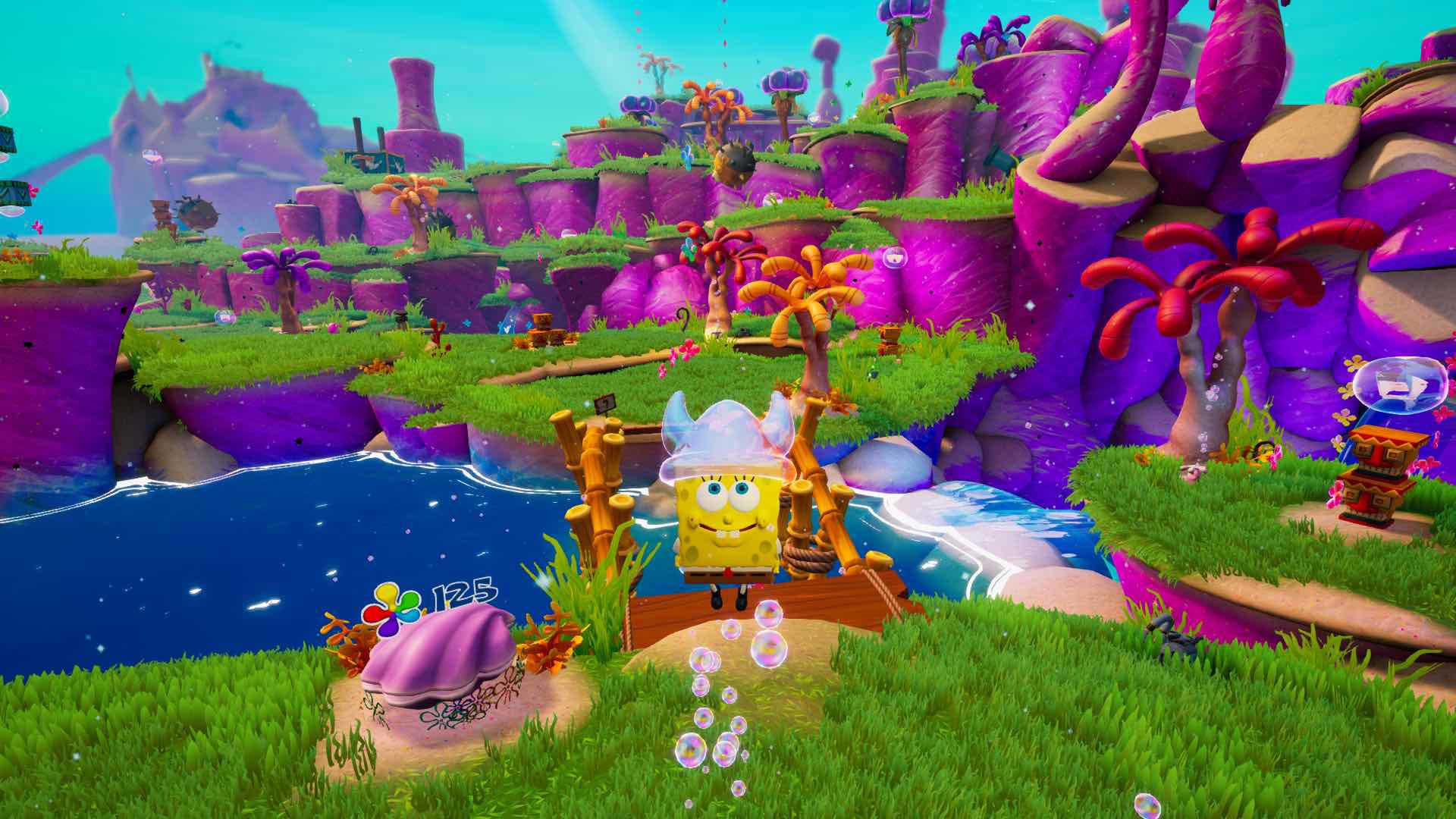 Most levels you play, you can select any one of the characters. However, most of the game is played by Spongebob and a lot of the sidequest can only be started by him too. Unfortunately, the game does not make this clear. I found myself walking through levels again with a different character only to find out that I missed a lot of objectives because I played through the level with another character at first. A little more direction would have been great.

Then drop on the deck and flop like a fish.

SpongeBob SquarePants: Battle for Bikini Bottom – Rehydrated is never too challenging either. Enemies get a little tougher as you progress, but the game’s difficulty stays the same. Robots shoot Tartar sauce at you, some of them can only be stomped on from above and some of them can only be hit off a ledge. Boss fights like Robo-Sandy and King Jellyfish have simple-to-master mechanics and you just need to often repeat the same process a few times to beat them. With that being said, this is not a bad thing. Most games back in the day all suffered from the same problem as everyone tried to jump on the Super Mario 64 train. It works as you never need to think too hard to get anywhere in Rehydrated. Its a simple pick-up-and-play experience. As the game is a remake, don’t expect anything new in the campaign if you played the original. The voice work is remastered along with the soundtrack and everything else has been recreated from scratch. This means character animations are great, environments are details and cinematics looks awesome. The characters especially are fantastic to look at and they just ooze the charm from the series. I could not help but giggle at Spongebob’s face when he entered Sandy’s dome and he dried up like a prune. It is gold.

There’s also a lot to keep you busy here. The game lasts well over 12 hours and there’s so much more to collect and unlock with the Golden Spatulas. It’s a good chunky game. 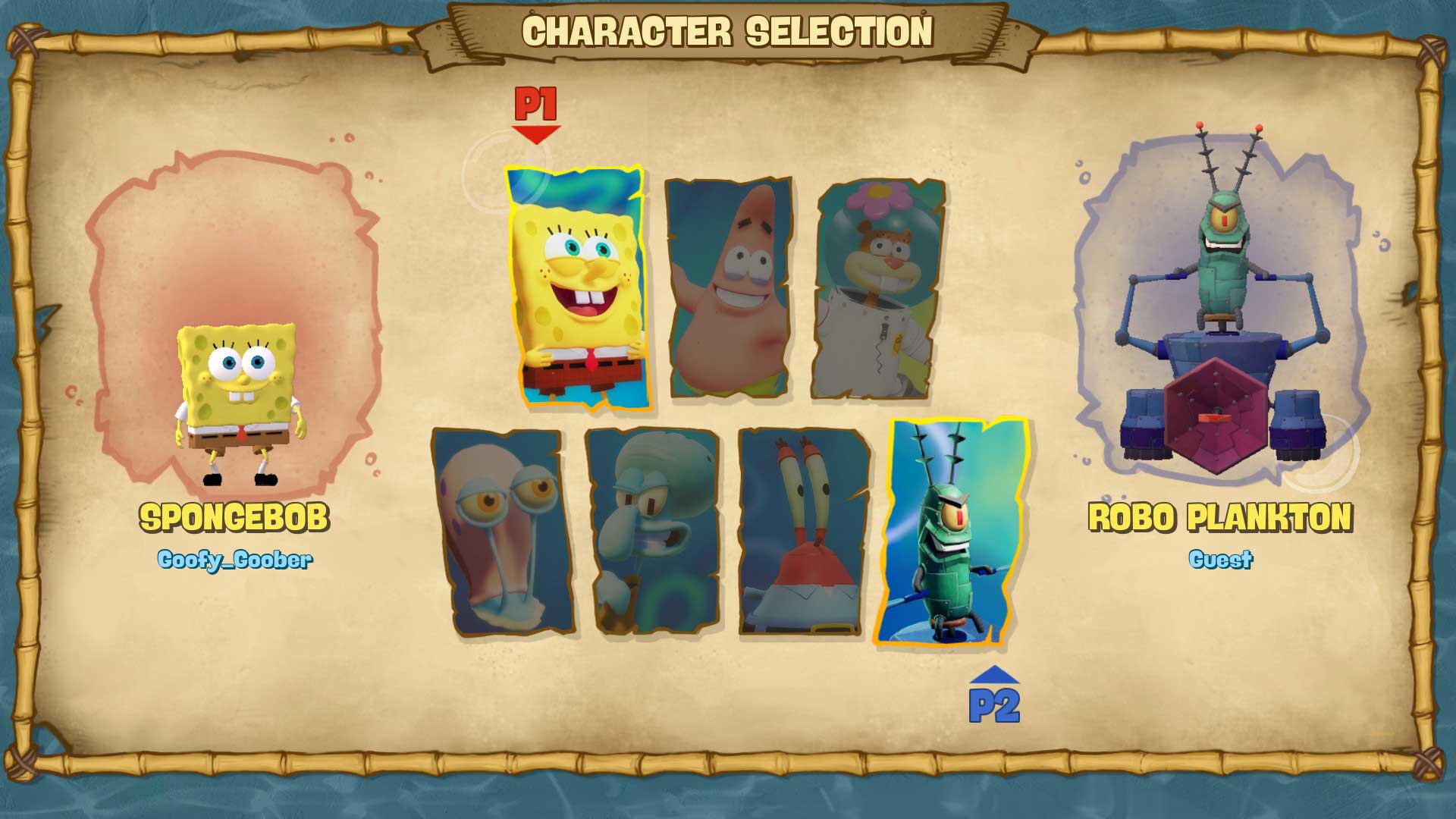 As for the new content, the game comes with a new multiplayer mode that was cut from the original game. You enter the co-op arena and have to fight through waves of robots while facing off against Robot-Squidward. As you play through the waves, you move to different islands. Each island destroys a tentacle from Robot-Squidward and when you get to the end he dies. You can die multiple times during this mode and play with characters you cannot choose in the campaign like Squidward. Unfortunately, it is basic. Once I completed it once, I had no urge to go back and do it again. Nothing changes and you cannot tweak the lives you get or the difficulty. It really is just a once-off experience which is great… Once. The remake also includes some cut levels including Patrick’s dream level and a new boss phase against Spongebob Steelpants.

SpongeBob SquarePants: Battle for Bikini Bottom – Rehydrated is a great tribute to the original game. It also looks fantastic. The Unreal Engine 4 brings the world to life in a gorgeous new way. Characters are charming, levels are vibrant and the whole game’s presentation is heaps and bounds above the 2003 release. With that being said, it is hard to overlook the rough edges which are still present in this remake. Platforming still feels clunky, combat is often way too easy and the lack of quest direction can get confusing. Not to mention the multiplayer mode which is great for hardcore fans but for everyone else, it is empty and dull.

Anyone who enjoys a classic platformer will love this game and anyone who has played the original will love it even more.

This SpongeBob SquarePants: Battle for Bikini Bottom – Rehydrated review was based on a code sent to us by THQ Nordic.