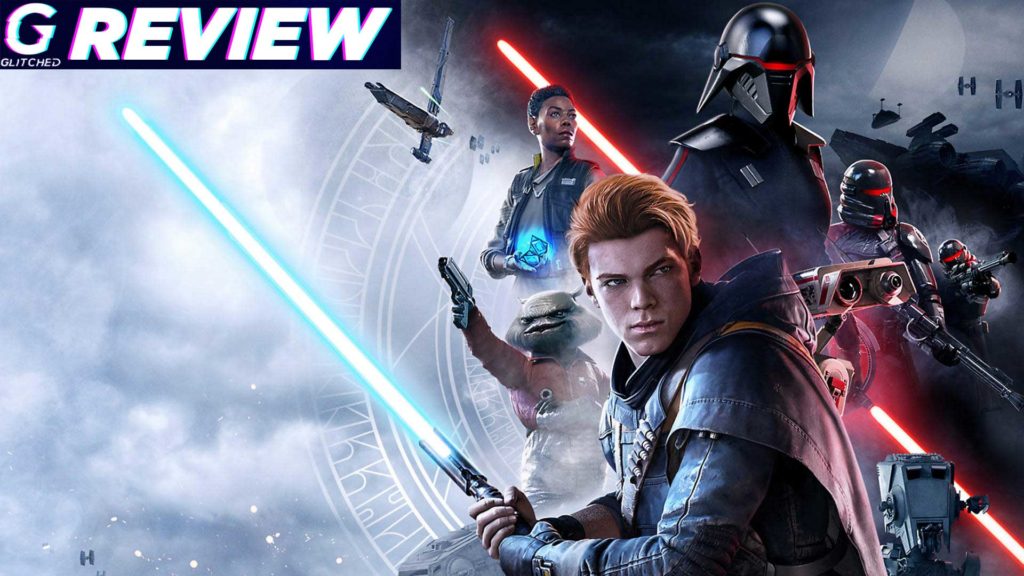 Set after the events of Star Wars Episode III: Revenge of the Sith, Jedi: Fallen Order follows the story of Cal Kestis, one of the last surviving Jedi who is being hunted by an Inquisitor trained by Darth Vader himself known as the Second Sister. The game’s heavy focus on combat, Star Wars lore and exploration means that the usual Star Wars experience we are used to from EA Games has now been plucked from the traditional PvP FPS game and put into an RPG formula. It works most of the time and while it may lack the polish found in titles that inspired it such as Dark Souls and Uncharted, it is the best Star Wars game in years.

Star Wars Jedi: Fallen Order takes place five years after the events of Episode 3. It starts off slow and the story takes a dozen or so hours before ramping up but for those familiar with the series, you will feel right at home here. Be it exploring the deadly dusty planet of Dothamir, slaying a giant spider creature called a Wyyyschokk or just exploring the ruins of a fallen ship of the Galactic Empire. Star Wars Jedi: Fallen Order could be the best representation of the universe in a long time and even those new to the series will find its worlds, people and locations a joy to discover.

The game begins as Cal Kestis, played by Cameron Monaghan from Shameless, is working in a junkyard on the planet of Bracca. With the Clone Wars in full swing, junk is the most precious commodity in the universe. Things go south when Cal is forced to use the Force to save his friend. In a universe where Jedi are in hiding and The Empire is slaying them as they are discovered, Cal is hunted down by the Second Sister. He is saved by former Jedi Cere Junda and pilot Greez Dritus. The long and short of it all; Cal sets off on a quest to track down a list of names of Jedi across the galaxy. However, Eno Cordova, a former master has not made the list easy to obtain and forces Cal and his new posse to explore a range of planets as they uncover the truth, avoid the Empire and regain Cal’s Jedi abilities. 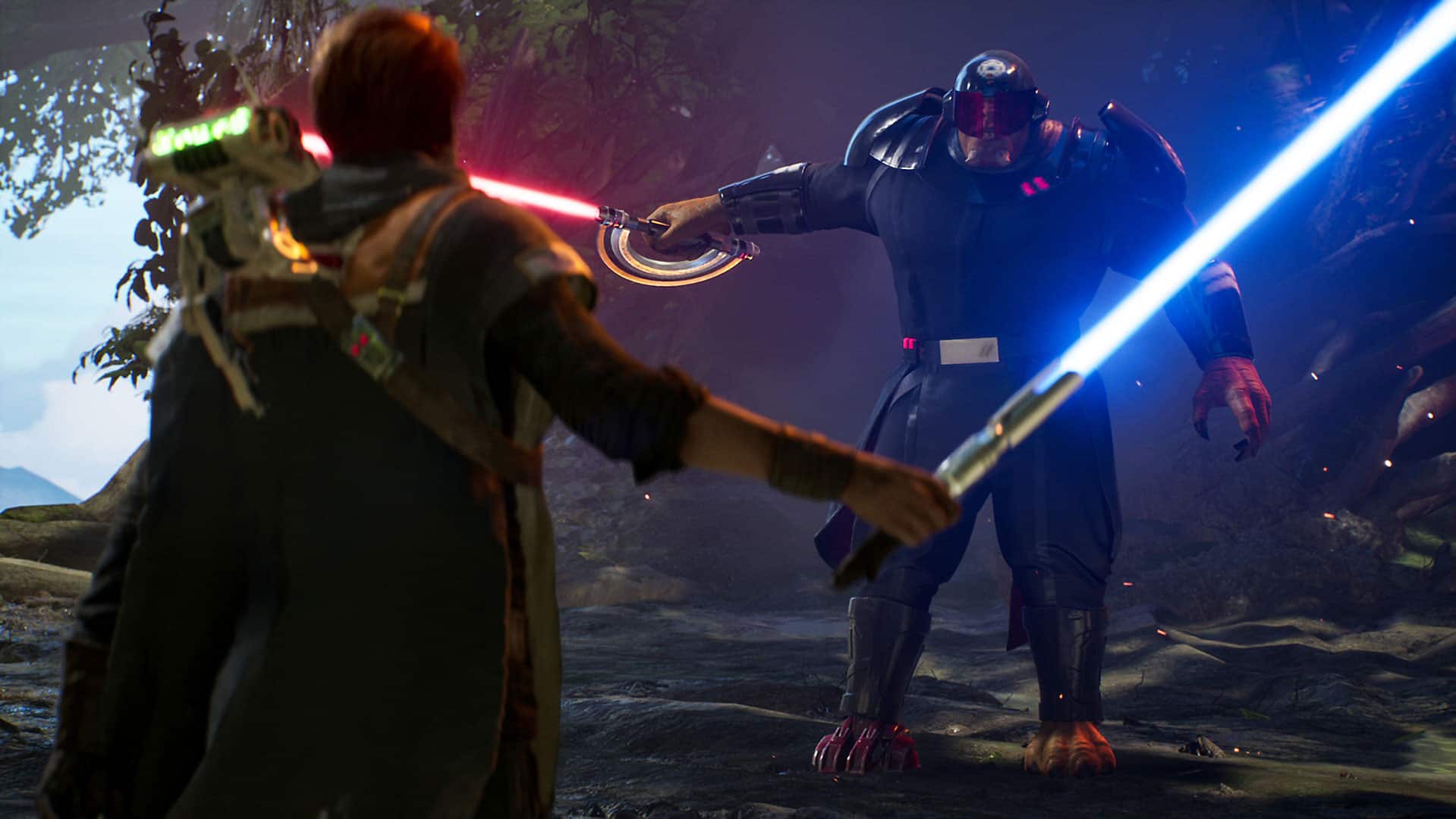 Anyone who has ever played a Souls game or any hardcore RPG from this generation will feel right at home with Star Wars Jedi: Fallen Order. The game’s combat is tight and relies on quick parries, reading your opponent’s attacks, and using combos, dodges and manoeuvres to survive the onslaught. Instead of armies of enemies coming at you, as I explored the world, challenging groups of well-rounded enemies blocked my path, fierce and deadly creatures got in the way and tough boss fights prevented me from progressing. Every combat encounter meant I had to know my opponent, how to counter them and how to get away if things got tough.

This sort of combat approach resonates with any hardcore action RPG released in the past few years and I loved every moment of it. Sure, Fallen Order lacks the polish of a From Software game as I would often get stuck on an object while rolling or the camera would get in the way of a well-timed parry, but the reliance on skill made the experience extremely enjoyable. When things got too tough for me, or I was just frustrated with a specific boss, I would simply turn down the difficulty to overcome the challenge and ramp it back up. 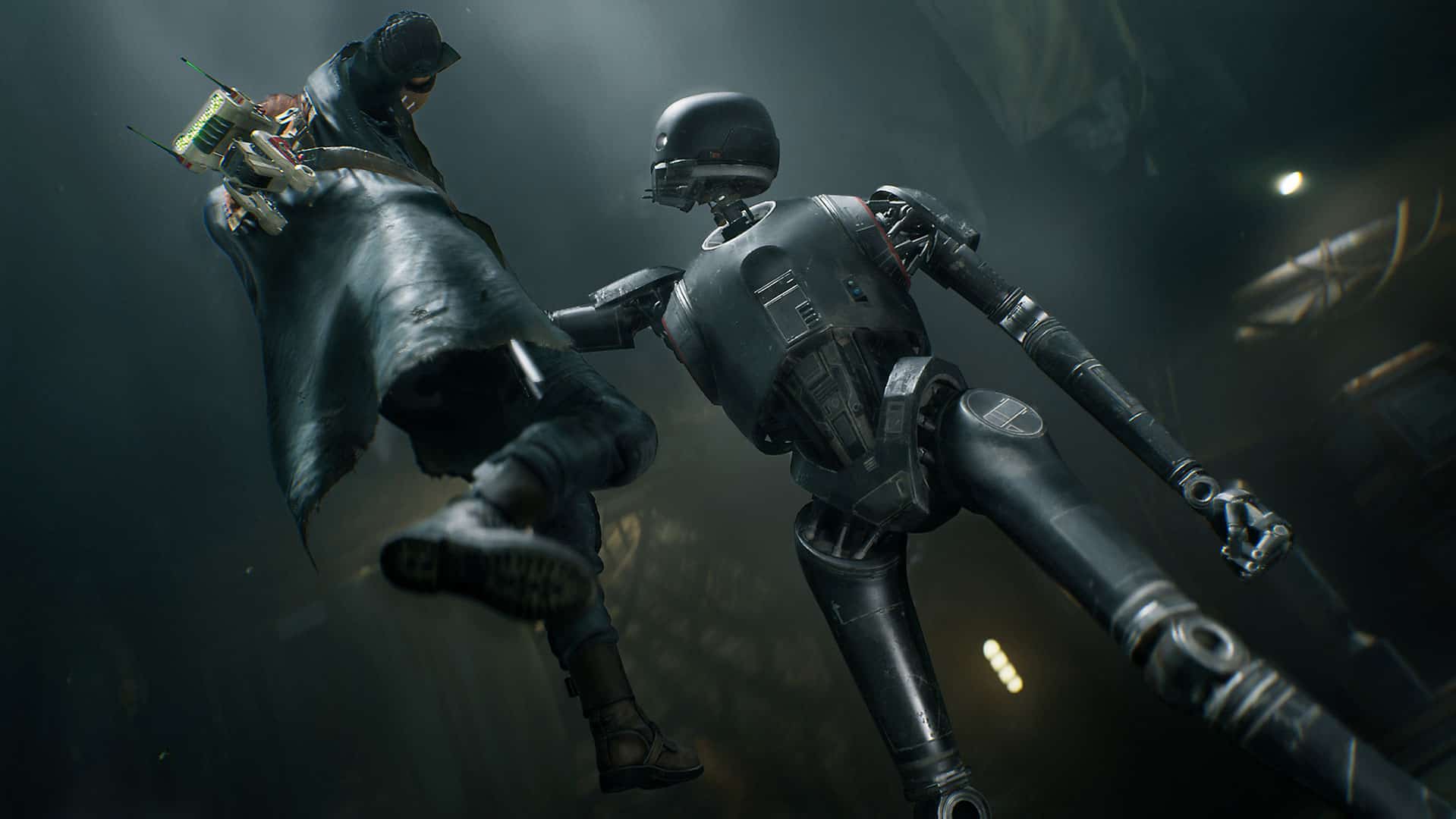 Upon starting the game you can select a range of difficulties which can be changed at any time. You can opt-in for the tougher mode that makes combat harder due to a tighter parrying timer, you deal less damage to enemies and take more damage from them. You can choose a middle ground or a story mode which is a lot easier as you don’t die so often, deal more damage and the overall game feels more like an action-adventure game.

Even with the combat issues, Fallen Order successfully makes you feel like you are a Jedi stuck in between the battle for good and evil. From the start, Cal has a lightsabre and can do all the great things you have seen in movies and TV shows to date. Deflecting a Stromtrooper’s shot to send it flying back at them, slicing and dicing spiders as they try to wrap you in a web and even dismembering droids. The combat feels great and as I progressed through the game, I unlocked new abilities and skills for Cal which further enhanced his repertoire of attacks. Cal uses the “Force” which is a meter that fills up as you attack enemies. Certain abilities like slowing down an enemy or pushing them off their feet use this bar so juggling between your normal attacks and these Force skills keeps combat fresh at all times. The skill tree allows you to perfect your combat style by mastering even more into a specific field. For example, Cal can push an enemy but can also charge it once unlocked to throw a group of them. He can then also do an overhead attack and later I unlocked a double attack. Sure, these attacks were hard to pull off due to the sluggish nature of them, but when I found an opening, it made it worth it.

Fallen Order’s XP system works along the lines of other hardcore RPGs. You gain XP by defeating enemies and finding lore and items. This XP is then put towards a bar which unlocks a skill point when you “level up”. Die, and that XP is then held by the enemy that kills you. Cal then needs to track that enemy down and deal damage to it in order to obtain it all back. You can, however, rest at a meditation spot and spend the skill point to unlock a new ability. However, you need to have reached the full extent of the XP bar in order to use the point. 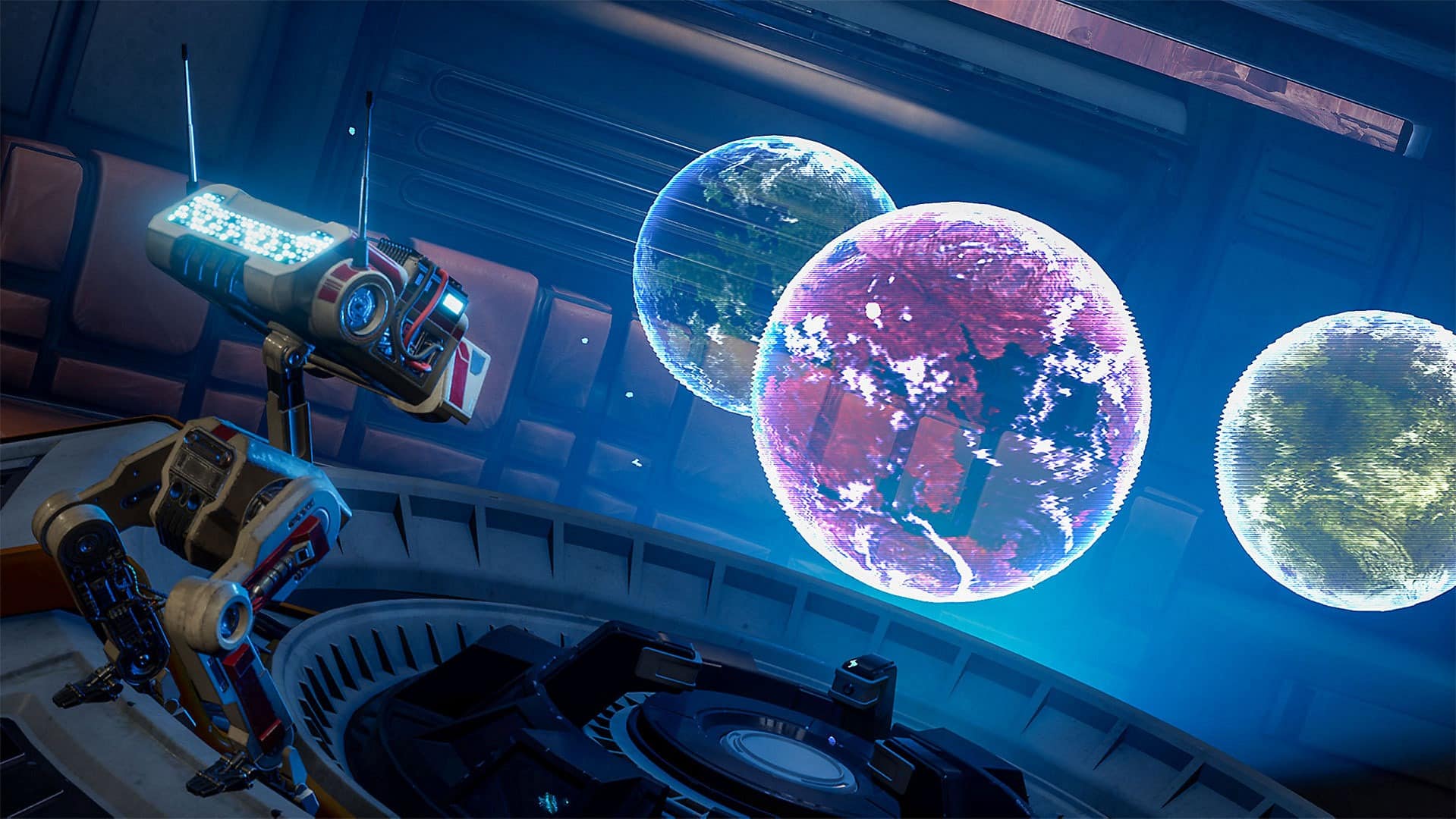 For the most part, this works. There was a risk and reward factor involved especially in the later game where I had two skill points and needed a third to unlock a powerful ability. Knowing I could die and lose both was stressful so I backtracked and kept safe. The game’s focus on exploration meant lurking into a cave would result in me finding a deadly creature to face and putting everything on the line to beat it. I took the risk, it resulted in a heart-racing fight but that is the whole point of the game’s flow. If anything, it was these moments that made the game so enjoyable.

Cal’s journey in Star Wars Jedi is accompanied by a cute little robot he finds early in his adventure called BD-1. This charming pile of scrap is upgraded as you explore the game to do new things often forcing you to backtrack to early planets in order to find new upgrades and collectables. He can overcharge terminals, open electric doors and much more. 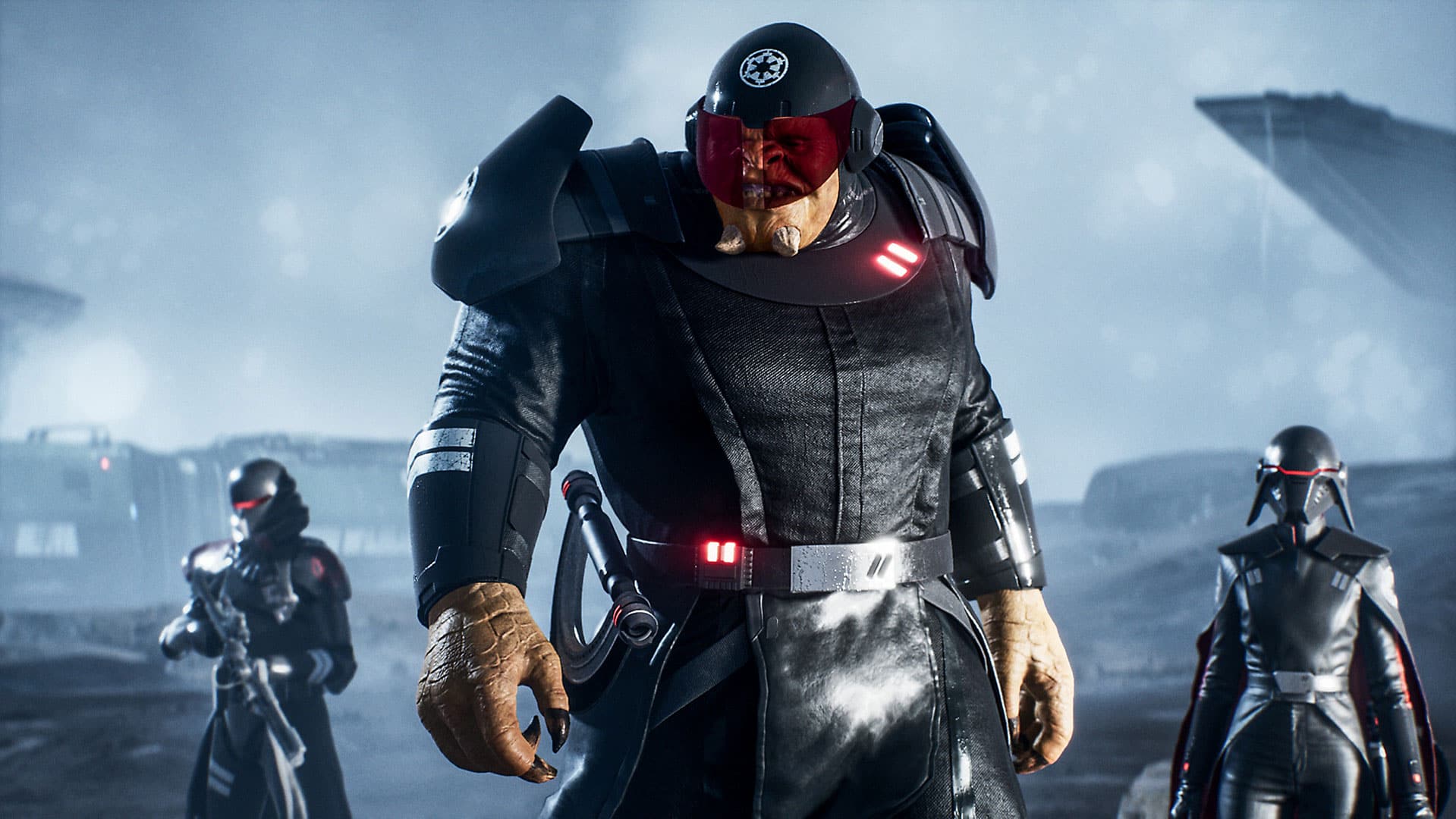 One of the best I found was the dual lightsaber, but other items include cosmetics for both Cal, BD-1 and even the Mantis, the spaceship they use to travel across the galaxy. BD-1 also heals Cal in combat when he wants to. The reason I say this is that often I spammed the button in dire need of a health stim, Cal even asked for it and BD-1 just refused to drop it. It could be a bug, or maybe something else but it did not work as well as it should have.

Where BD-1 does shine is in its exploration as the robot is key to getting around and you want to explore every nook and cranny in the game. At first, this is limited but later in the game, I found myself exploring every hidden pathway and using BD-1’s ability to open doors, slide up rope and even overcharge a fan in order to wall run to the other side. Cal can get around too as the game relies on you jumping, climbing, wall running and rope swinging across giant gaps in order to get where you need to go. Most of the time, this parkour is great but sometimes, like the combat, the rough edges are hard to miss. 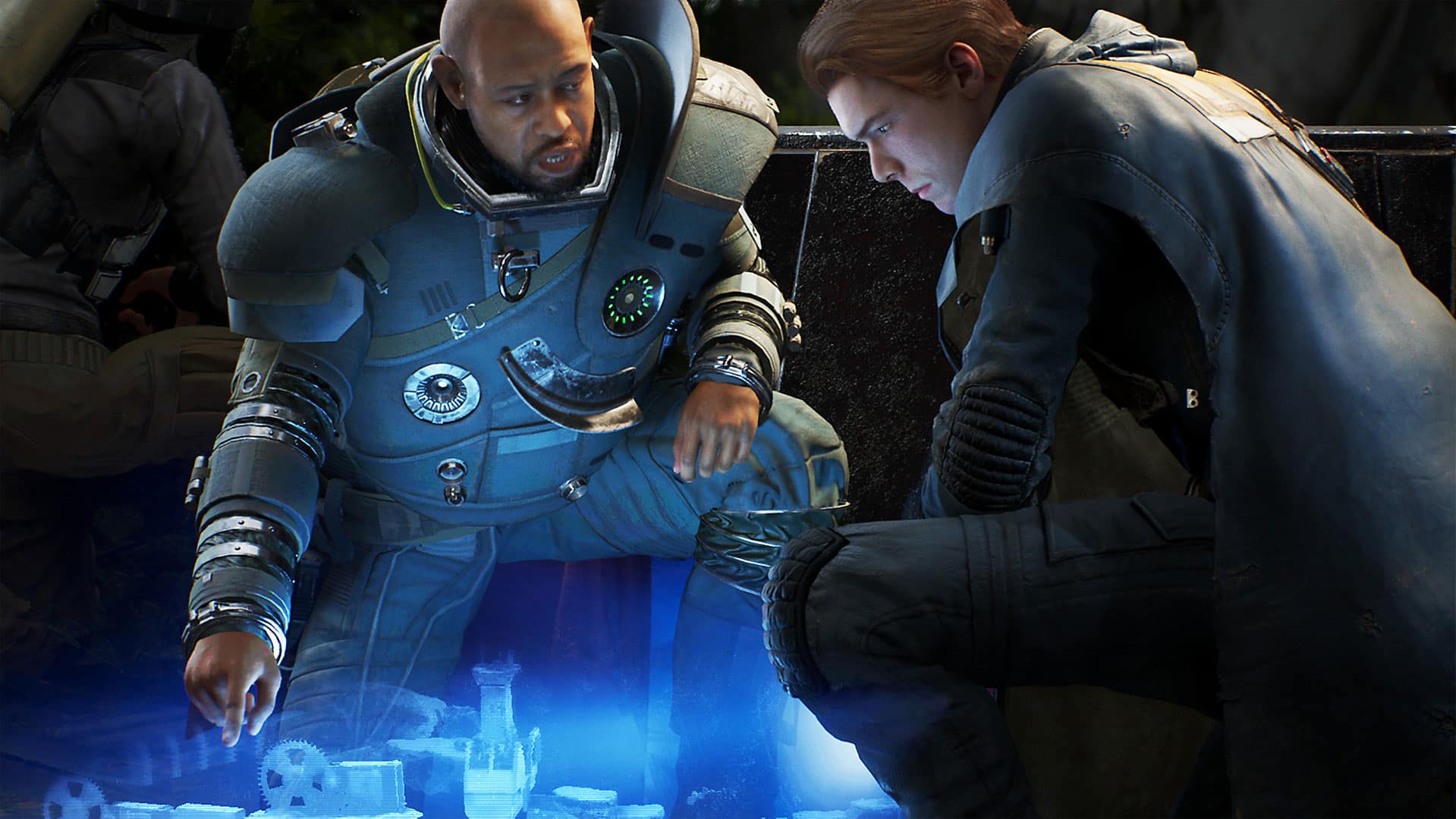 Slowing down a fan with the Force to only have Cal hit the side of it while trying to jump through was frustrating. But the worst of all was his inability to grab a rope. He would often just fly right past it plunging me to my death. Luckily, falling due to bad parkour did not kill Call, rending his XP useless. Instead, you lose a chunk of health and get to retry.

Star Wars Jedi: Fallen Order shines in its worlds, combat and story. It manages to deliver an intriguing narrative with a handful of characters you love having on-screen. While you are exploring the planets, the combat keeps you on your toes and the exploration makes the worlds come to life. If you ever watched a Star Wars movie and wondered what was over that hill in that one shot, Fallen Order gives you the opportunity to see all that.

The game may have some clunky moments where the combat just feels unpolished and Cal’s jumping is a bit off, but this can all be forgiven when you realize this is the story-driven Star Wars game we have been asking for.

This Star Wars Jedi: Fallen Order review is based on a code sent to us by EA Games.