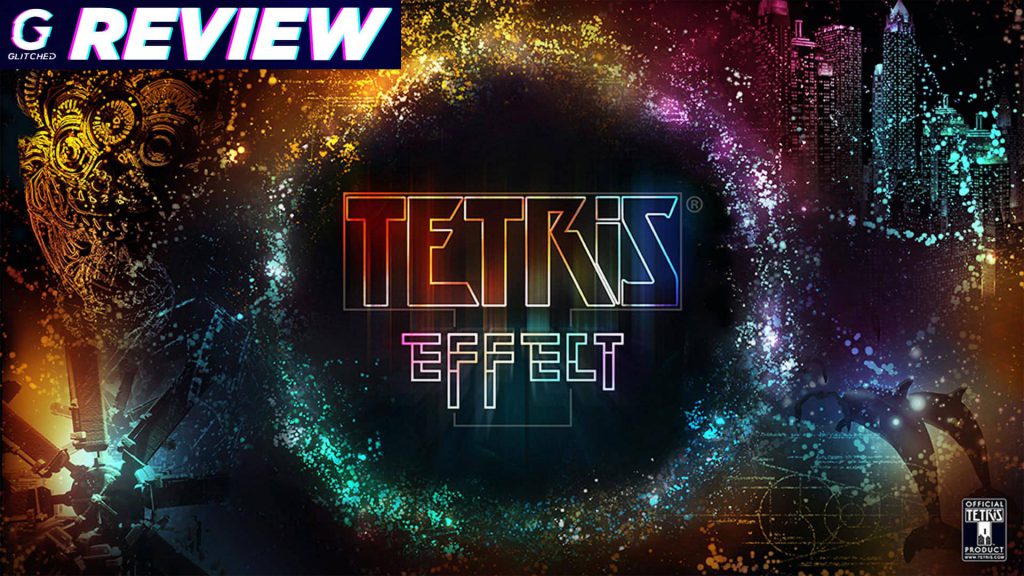 I never thought I would actually enjoy playing Tetris. Sure, I have played it once or twice but in general, it has been something I never really got into. I even mocked Sony at E3 for staging a build-up to a game announcement and it turned out to be Tetris Effect. Who knew that it would only take a few hours with a game to change everything I have ever thought about Tetris. Tetris Effect is one of the best games I have played this year and it is just Tetris, can you believe it. But there is a lot more behind Tetris Effect thanks to the awesome Tetsuya Mizuguchi being behind the game. You would have experienced his work if you ever played Lumines or Rez Infinite and there is a lot of his style oozing into every aspect of the game. 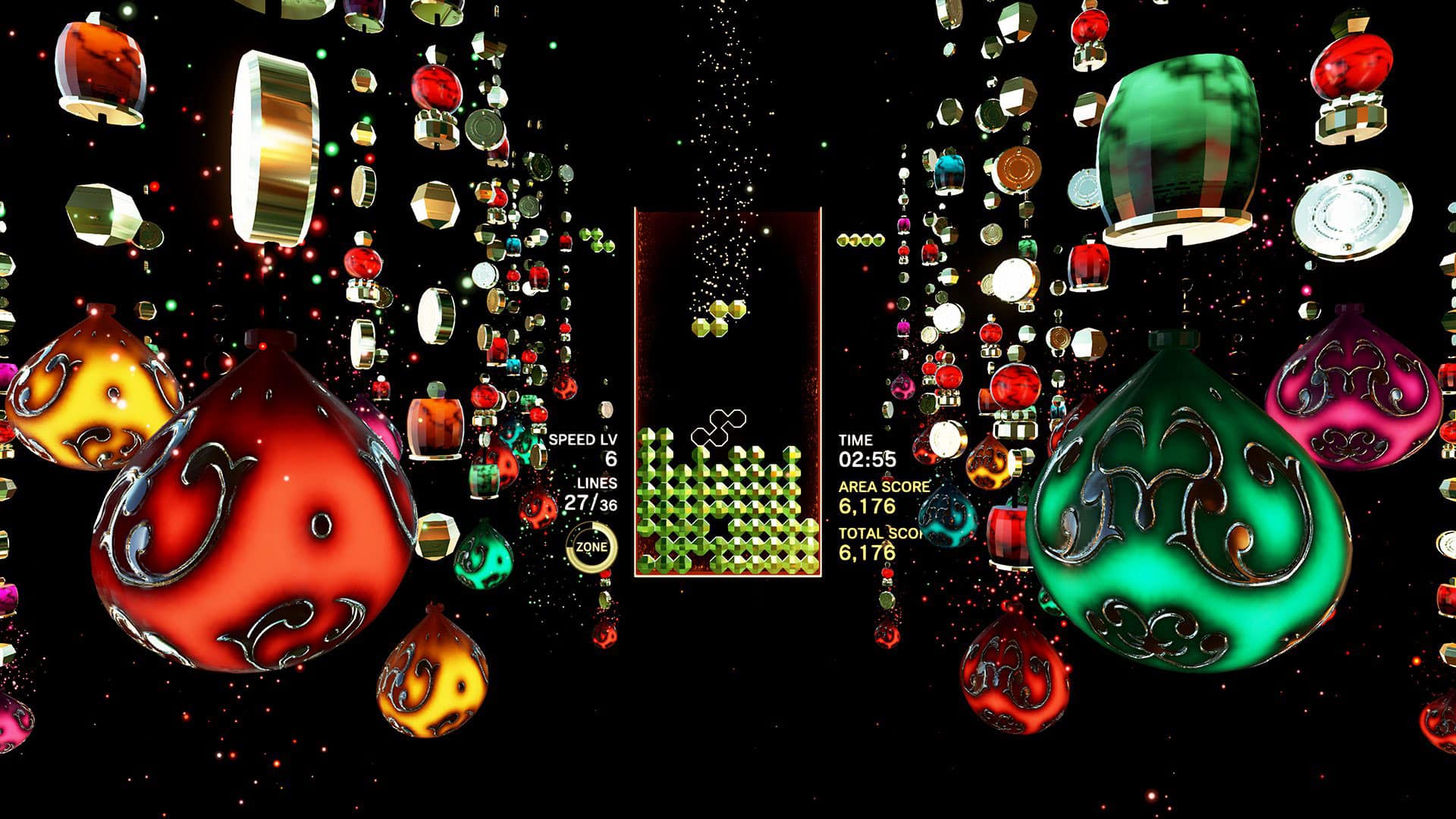 There is something so magical about how Tetris Effect presents itself that makes it so great. It is the combination of beautiful game design, a fantastic soundtrack, and its addictive gameplay all combined into one calming yet frustrating experience. How can it be both you may wonder? Well, you start off a level. Music plays in the background and every flip of a block, a movement you make across the screen and placement you choose is following by a sound effect. All these sounds create some sort of visual effect on the screen and go hand-in-hand with the background tune. As you progress in the level and hit specific tiers of lines cleared the stage evolves. The music changes its beat, the blocks fall faster and the visuals evolve into a breath-taking distraction. 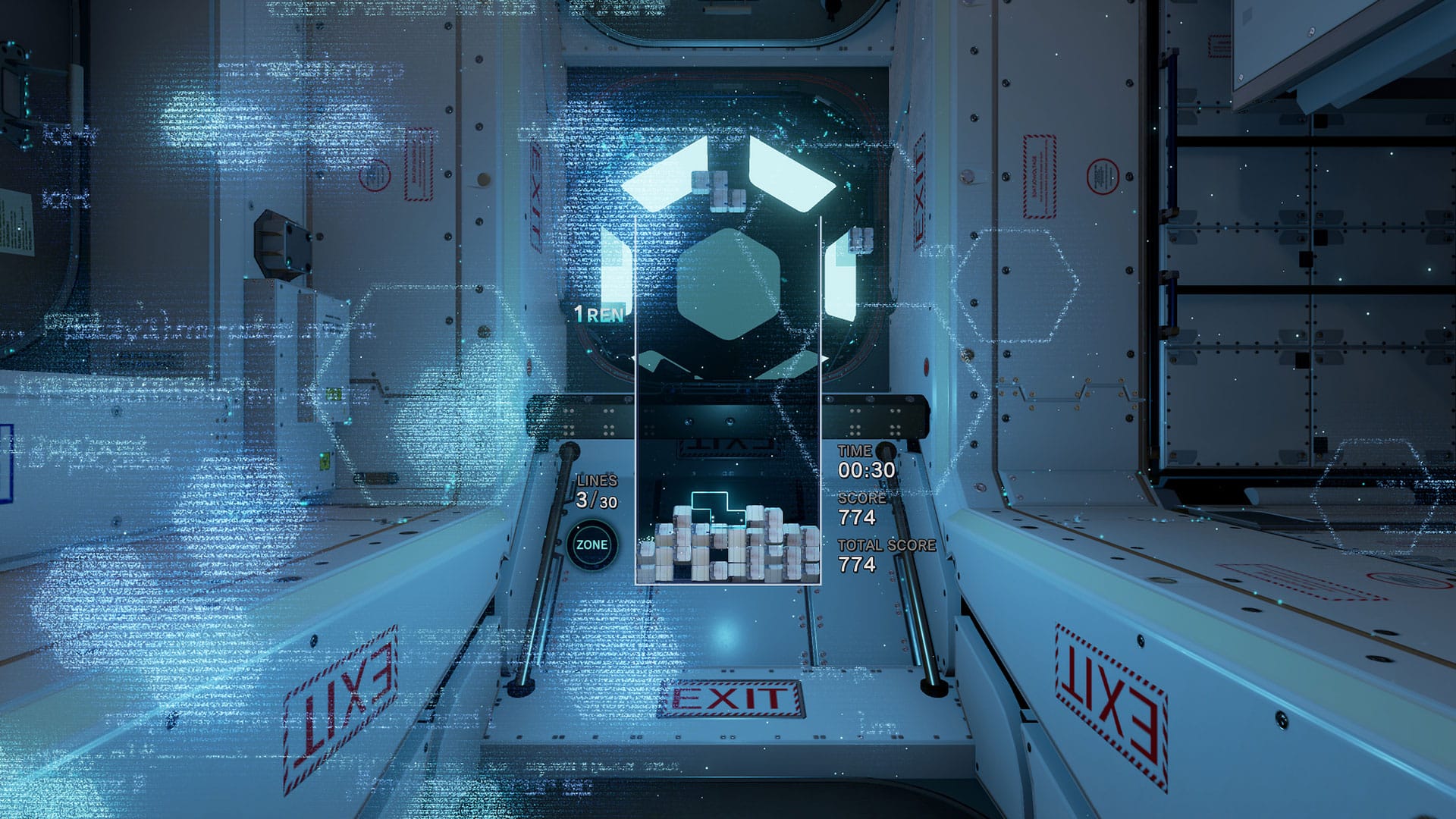 Every one of Tetris Effect’s thirty-or-so levels is unique to the point where I cannot tell you which one was my favourite. Although, I still have the song from the first level imprinted into my mind. But the game takes you to some wonderful places. Under the ocean, a fiery volcano, a Japanese garden and much more. The soundtrack for every level is unique and the look and feel of every level make each experience so stunning. But why is it so frustrating? Well, it is Tetris and so it comes with Tetris mechanics which take a while to master if you can even call it “master”. It is really just getting better at placing a bunch of blocks into holes to fill up a line so it can clear and give you points.

While it sounds easy enough, anyone who has ever attempted to play Tetris before would know that it is a tough game to perfect. Blocks are not set to their spawn so every stage you play will be a different experience and just when you thought you had it nailed down you will be given three of those damn “Zs” in a row with nowhere to place them and it will screw your entire plan up to the point where you will be tested to perform miracles.

Some levels went really well for me without any issues and smooth line clearing but others, like that darn volcanic level, had me raging for hours on end. Not only did it give me the worst block spawns every time but it also had two phases where the drop speed increased….twice. The music pace went wild with drums and people screaming, the level started flashing like crazy and those darn blocks kept dropping faster and faster. It was a lot to deal with. Like I mentioned, every level is a new experience. Some harder than others.

Tetris Effect is divided into different modes that are sure to keep you busy. The main Journey Mode sees you experience the game across all these awesomely-designed staged as you take on chapters that consist of three to four levels each. They are themed and the mode is said to take you on a “voyage of emotion and discovery” and trust me, it does just that. Journey Mode can be played across various difficulties which range from Beginner, Normal and Expert, and you can try these harder modes if you want a real Tetris challenge. 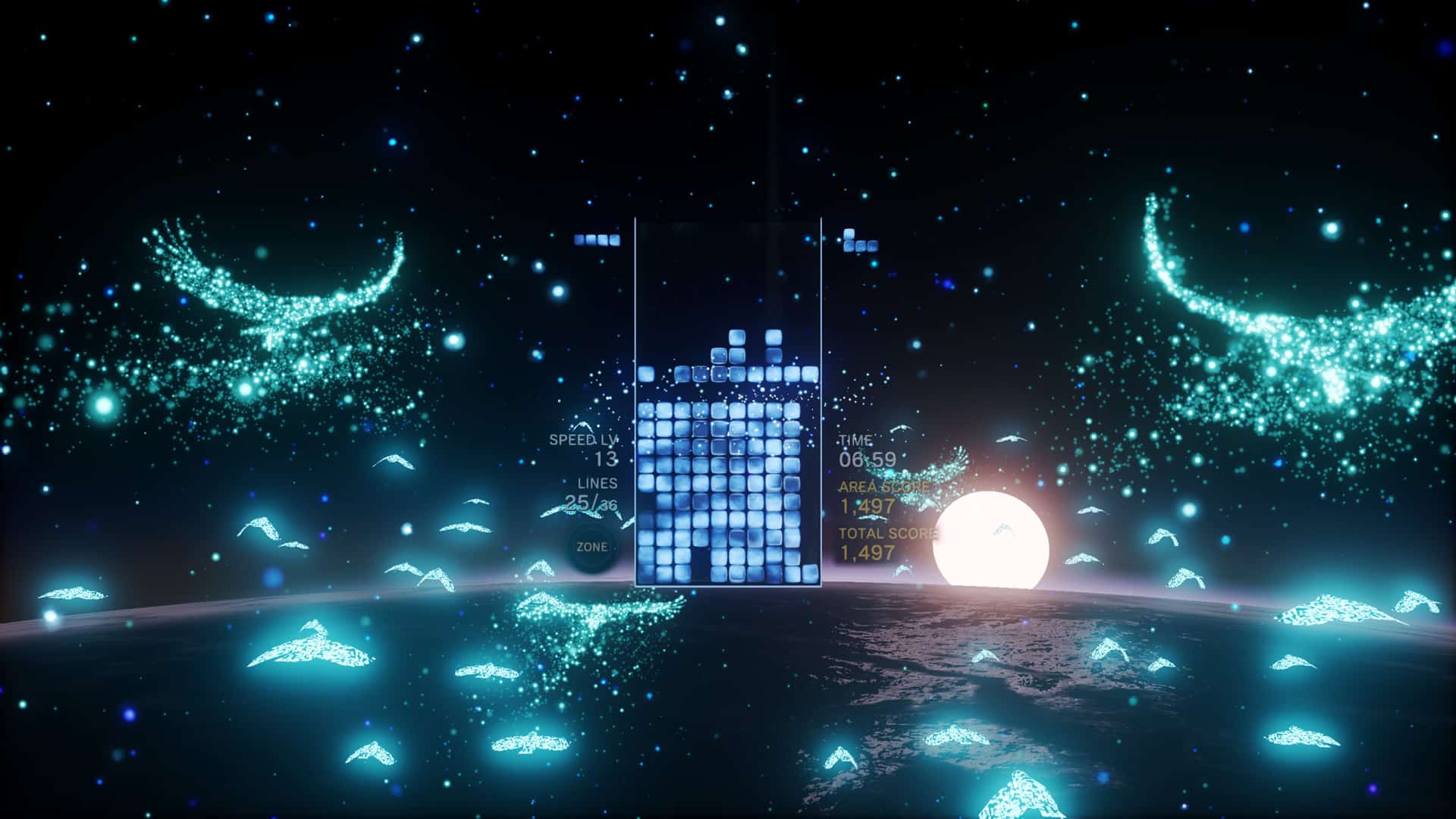 I do believe that the real magic of the game is in the Effect Mode which is loaded with things to do. You have an avatar that is a small object taken from the levels you play and you are placed on a modelled Earth. You can see other players moving around the orb and the planet is filled with geolocations to where each player is at the time. It is meant to be a relaxing experience but does not serve any real purpose really. You can listen to the soundtrack but you have to unlock each song first. The actual content from Effects Mode comes from its various game modes that tweak the Tetris experience in cool ways. Chill Marathon lets you play the game slower with no game overs. All Clears tasks you to clear as many levels as possible before the time runs out and Purify has you clearing Dark Blocks within the time limit. 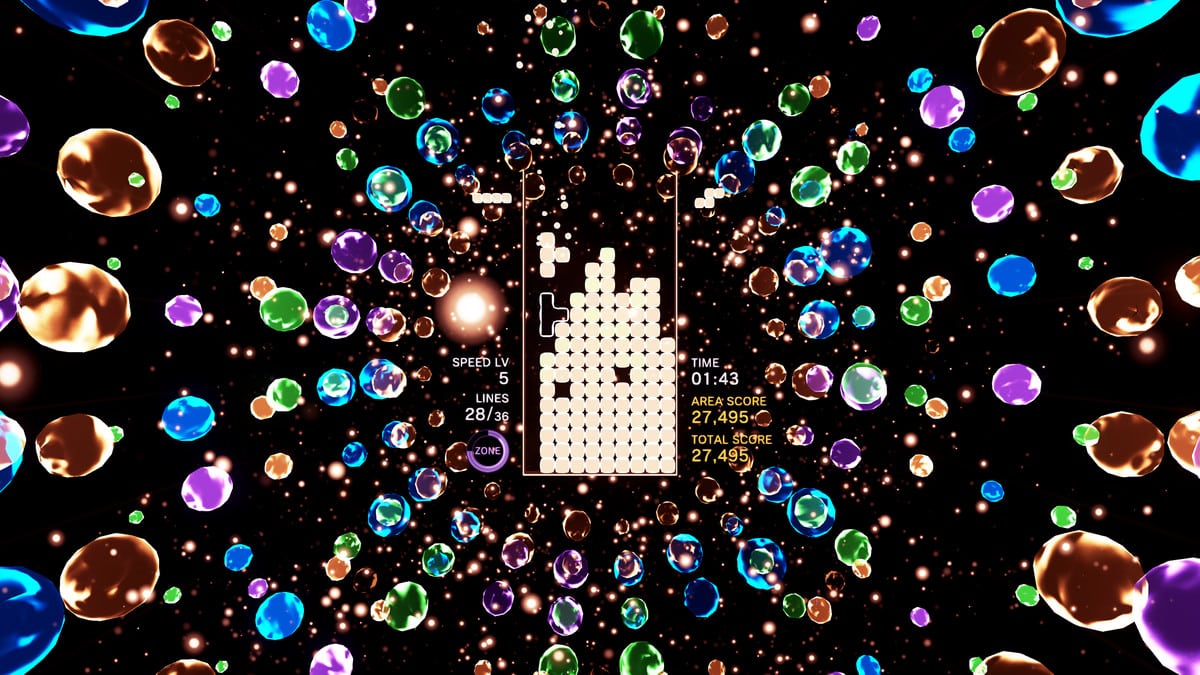 There are a lot more modes to this and I take it that after you finish the Journey Mode you will spend a lot of time here if you are really into the game. It is the true hardcore side of Tetris for some and the calmer experience for others. It lets you go back and play your favourite levels the way you want to and that is all that should matter. Tetris Effect also has PS VR support and it is a big deal. Just when you thought you had experienced the beauty, the game’s VR support is another gorgeous experience and everything comes to life even more. It may not be a system seller like Astro Bot but it is a fine addition to the system. 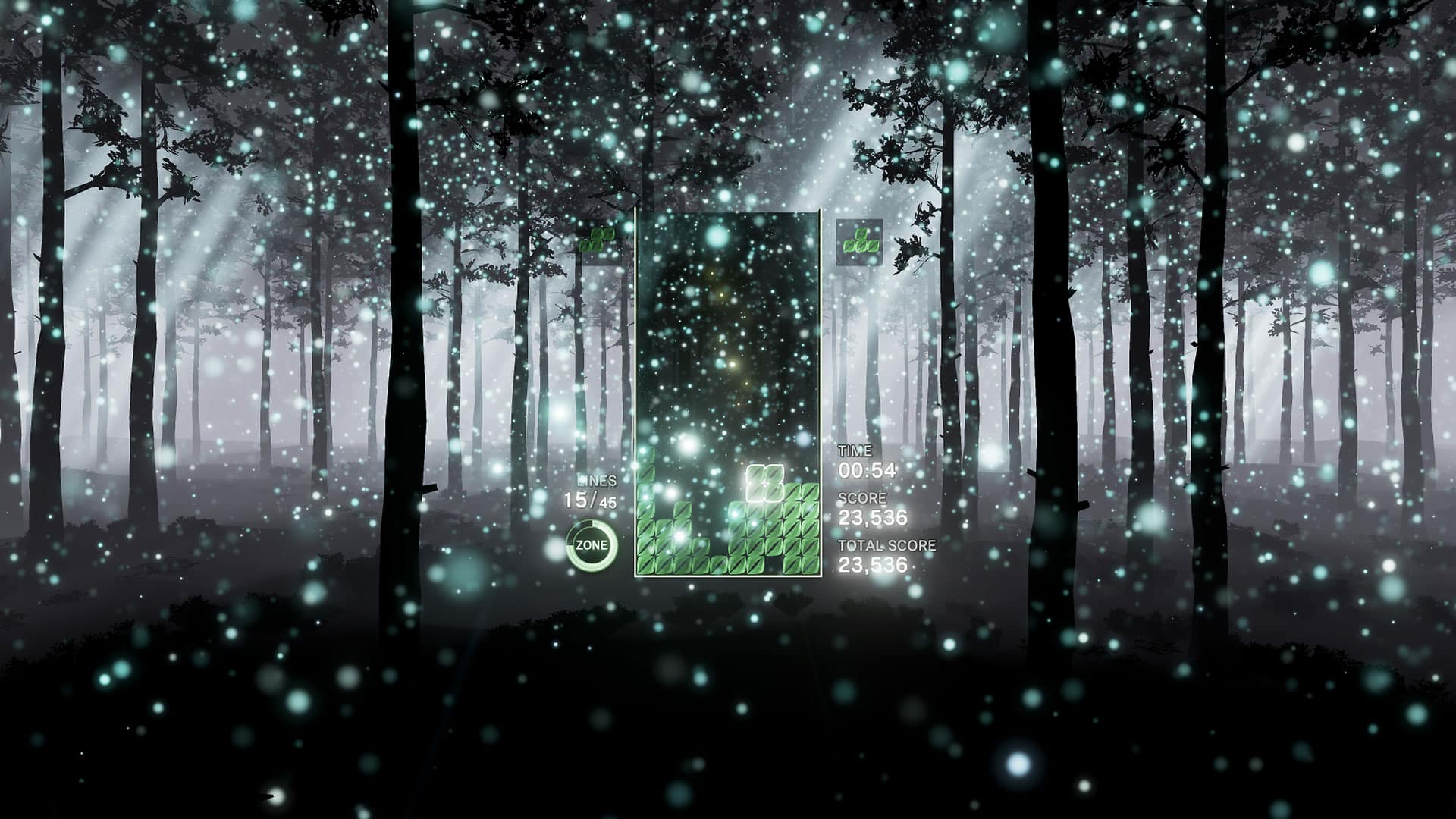 Those of you with PS4 Pros and 4K HDR TVs will be treated to some very fancy visuals too. Tetris Effect’s HDR comes to life with bright particle effects filling the screen, dark backgrounds hiding away assets and flashing lights that trigger to the beat. It is a gorgeous game and HDR just makes it three thousand times even more gorgeous. I want to say that the game is rather short but it really isn’t. The multiple difficulties, Effects Mode and the sheer joy of playing the game makes it something you want to keep going back to.

Tetris Effect could be the best Tetris ever made. Its creative direction is its strongest asset while its addictive Tetris nature will keep you coming back for more even after you lose and lose again. Anyone with a PS VR will love this and 4K HDR TV owners prepare for something rather spectacular.