The ASUS ROG Ecosystem Could Be The Best in PC Gaming

The ASUS ROG Ecosystem Could Be The Best in PC Gaming

PC gaming is no stranger to a hardware maker’s ecosystem. Hardware brands around the world work hard to make sure its products all intertwine together so the more you buy, the better things look and fuse together. ASUS is one of them as its Republic of Gamers, or ROG for short, packs a load of customization features and the more you combine together, the better your PC setup.

Check out our video feature of the ASUS ROG components down below;

ASUS sent us its brand new ROG STRIX Helios PC case and the name is just as extravagant as the features. In the case came some of the most powerful and cool-looking hardware any gamer could ask for and ASUS made sure to pack some ROG components which added to the ecosystem we were so keen to test out. 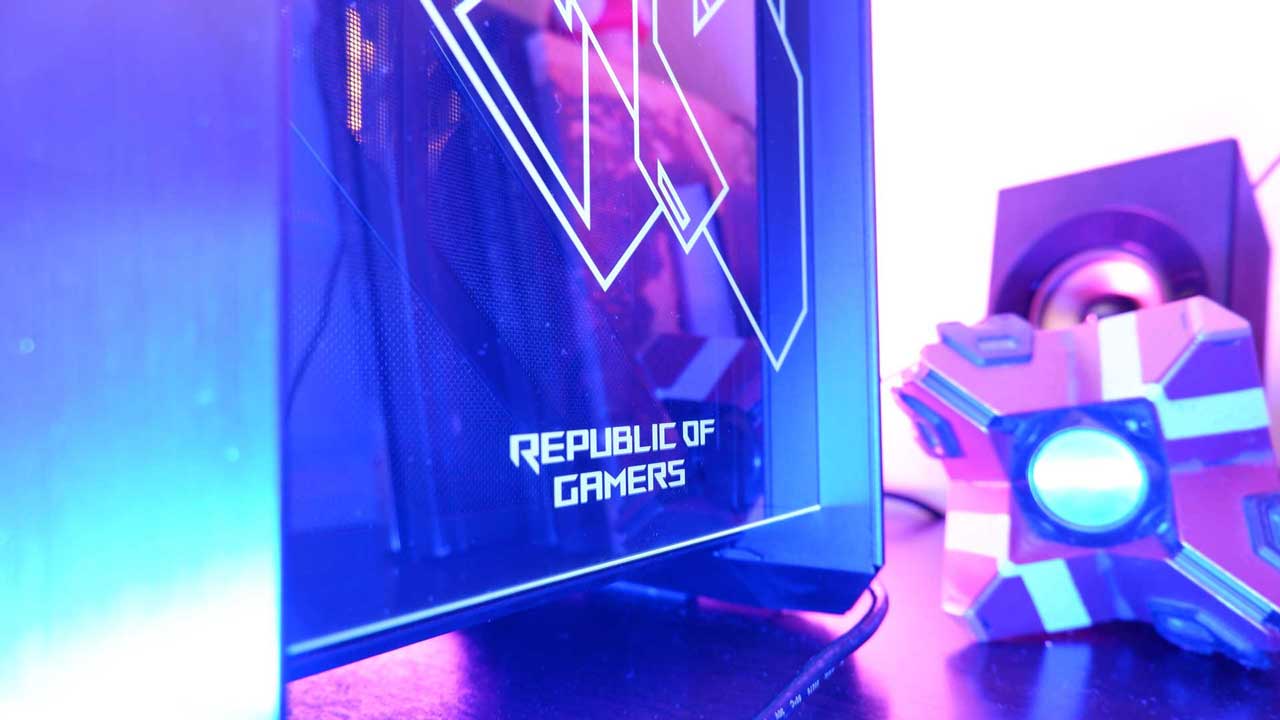 In short, it was ASUS ROG heaven and the Aura Sync RGB that came with all these components made it light up like every gamer’s dream.

The ASUS ROG Strix Helios case is a beast. I spent a good few hours with it exploring everything it has to offer and it is not your average run-of-the-mill gaming chassis. 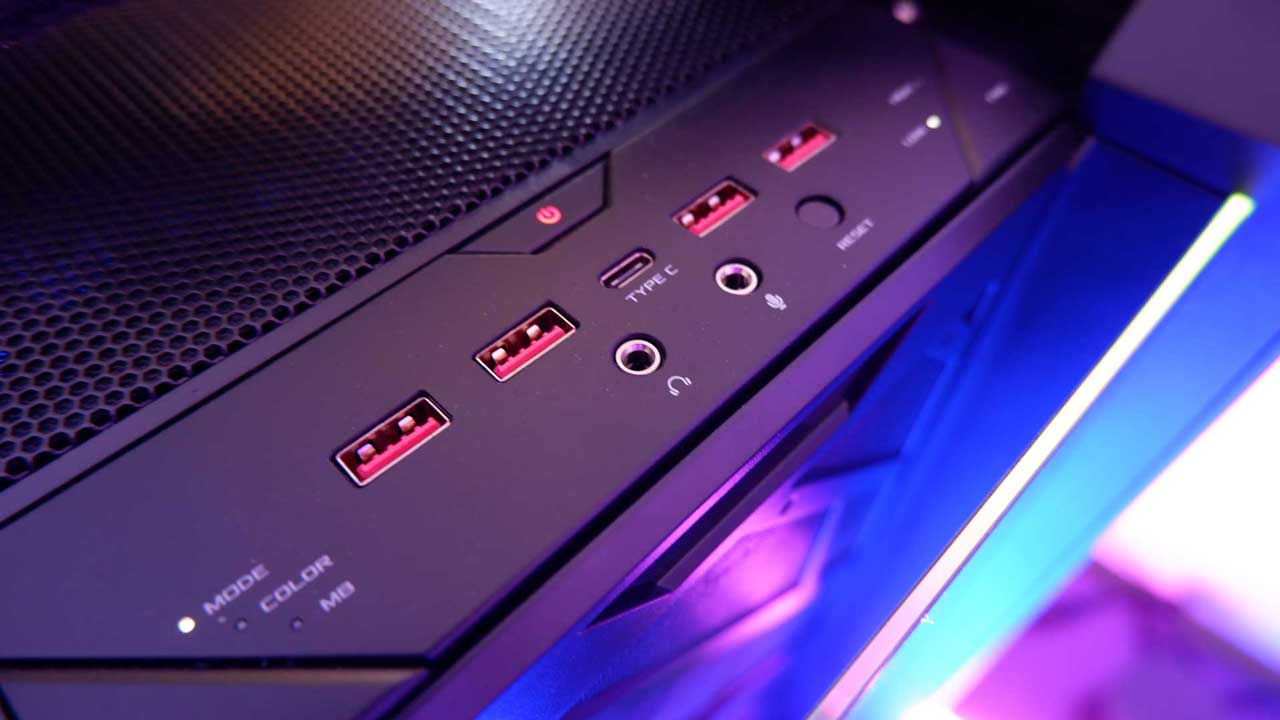 It features a clean and sleek design ready for all modern gaming components including the Zenith Extreme Alpha motherboard and Ryujin cooler. On the front, there is a glass slab that has the iconic ASUS and ROG logos and it has integrated Aura Sync RGB.

The fans are all protected by dust filters and the tempered glass sides easily come off with a simple press of a button. The case features a multifunction cover that can be adjusted to support your graphics cards and motherboard.

The ASUS ROG Ryujin 360 Cooler is as extra as one could ever get. It is pricey coming in at over R2,500 but the features make it worth the asking price. It has a 1.77-inch display that shows stats such as the temperature and a customizable logo. 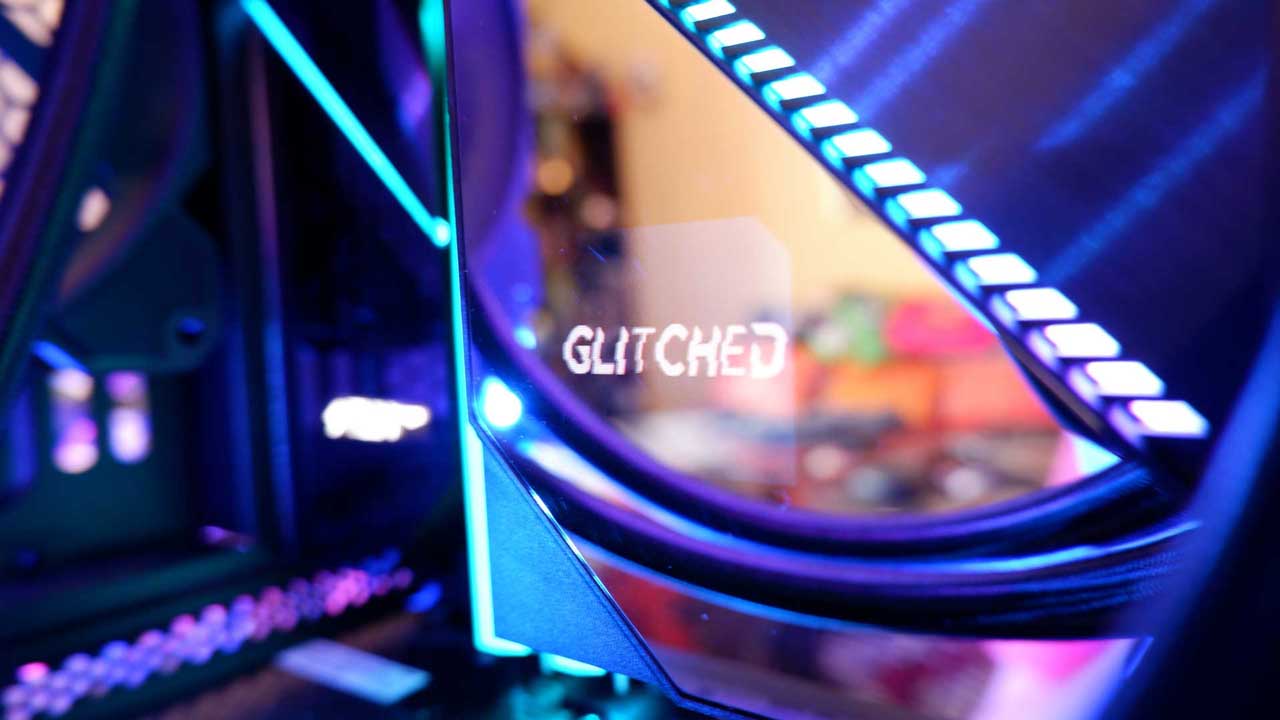 Why would you want to put a custom logo on it? Well, because you can! We exported a gif from our video library and put it into the LiveDash program and it never worked. We realized there were requirements to adhere to before it would appear. Guess we were a little to excited.

The GIFs need to be a specific resolution and size so after exporting it to the correct size and uploading it again, it worked. The cooler also features the ROG Aura Sync but more on that later. 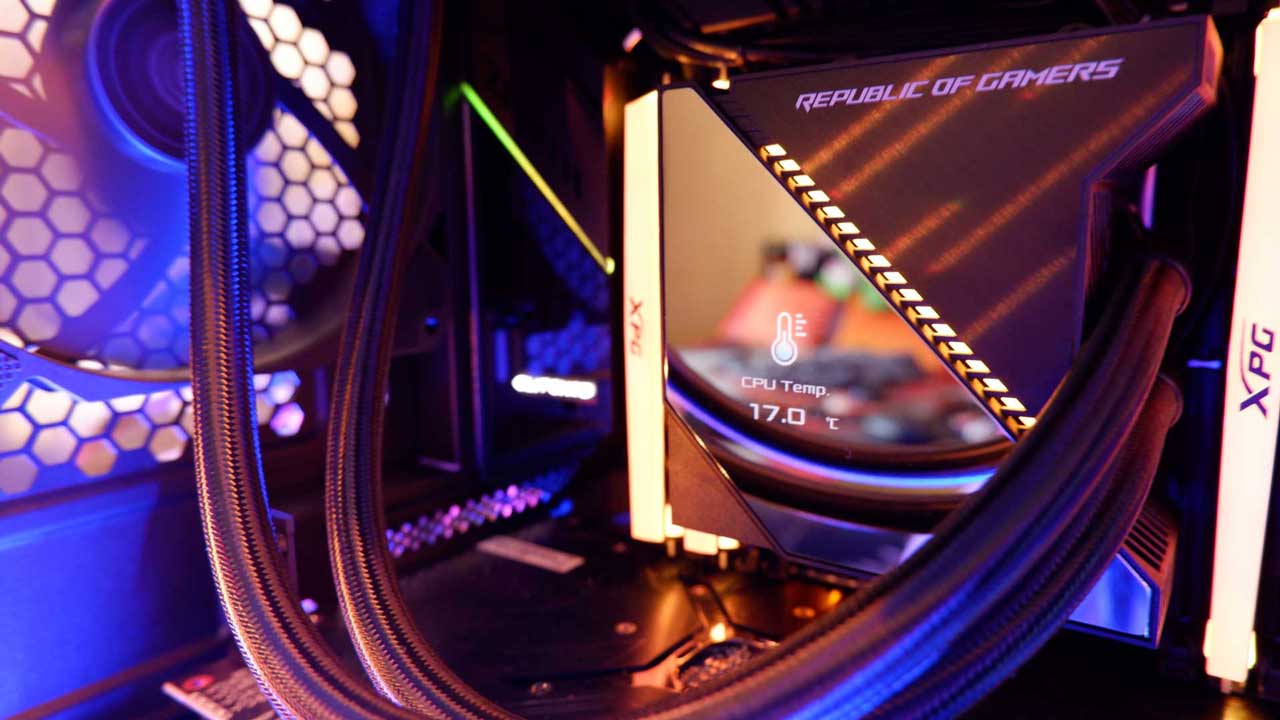 The Ryujin cooler, other than looking cool with our logo flashing on the OLED display, also keeps track on the temperature of your CPU and other things. It integrates with the motherboard to read voltages of your Power Supply, fans speeds of the case and GPU and frequencies of all your ROG components.

Think of the display as an external program you would usually download to view all these stats but without having to download anything extra. It allows for a quick glimpse at your PC’s current health while looking awesome all at the same time.

So the only downside to this gaming rig, in my opinion, is the ASUS ROG STRIX RX Vega64 GPU only because it is not an NVIDIA RTX card. It would just have been the cherry on the top if it was. Still, the GPU is a beast but we know that already. 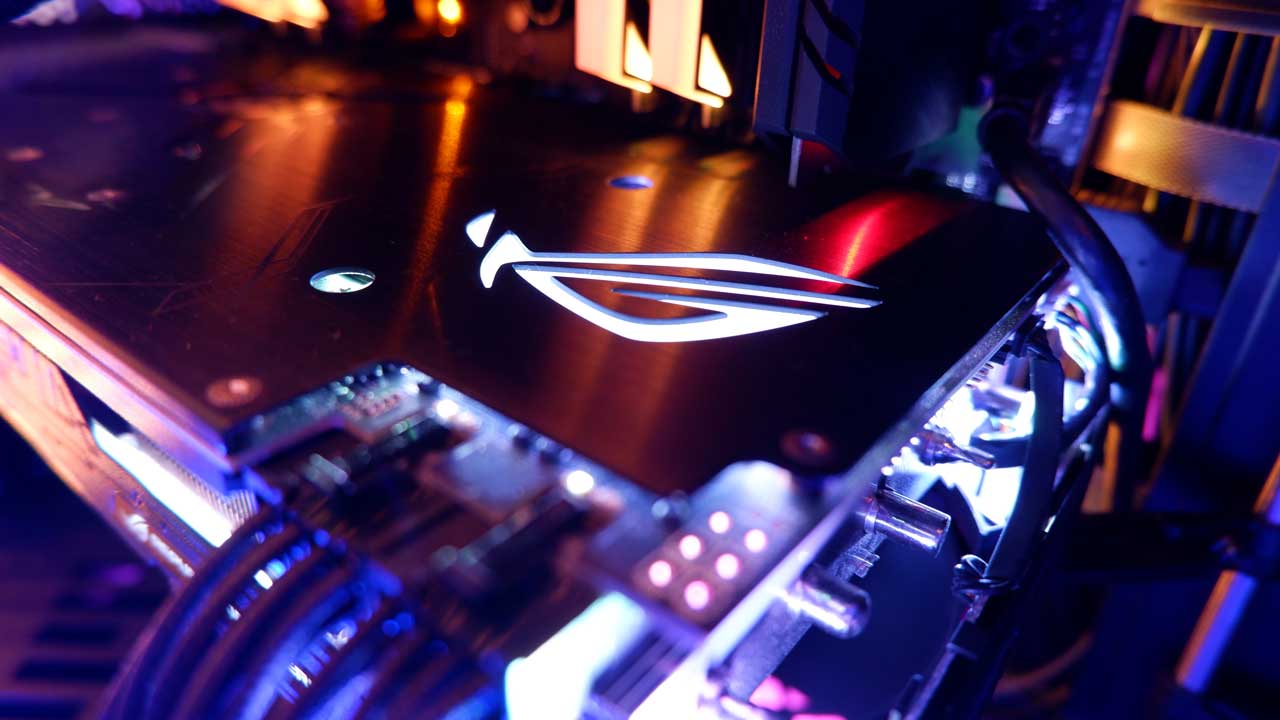 The main point I want to touch on is the integration of the card with the other ASUS ROG components. First off we have the ASUS Fan Connect II feature that allows the fan to connect to the other fans in the case. This allows them to all operate at the same speed and adjust automatically based on the one reading the highest temperature.

You can adjust the modes to your liking from Auto Mode that operates the fans to the best optimal setting to a fixed mode which is up to you to decide. We then have the user-defined mode that allows the case fans to reference the CPU or GPU to determine the best speed in which the fans run at.

In short, the GPU fans and the case fans can all live in harmony as the calibration features create a perfect ecosystem for the cooling of your ROG devices.

Gone are the days of your power supply being a simple box powering your PC. The ASUS ROG Thor 850W is a fancy PSU with some impressive design features. Sure, inside of it we have the patented ROG heatsink but the integration of the PSU with the motherboard, the GPU and the CPU makes all the difference.

The power supply features Aura Sync which we will cover in detail a bit later and a real-time power draw monitoring system which is displayed on the OLED display.

Just when you thought the RGB could not get any more out of control, XPG added it to their RAM. It is a nice addition but what makes it even better is the fact that it also supports ASUS Aura Sync so when you adjust the settings, it will change the colour of the RAM lighting too. 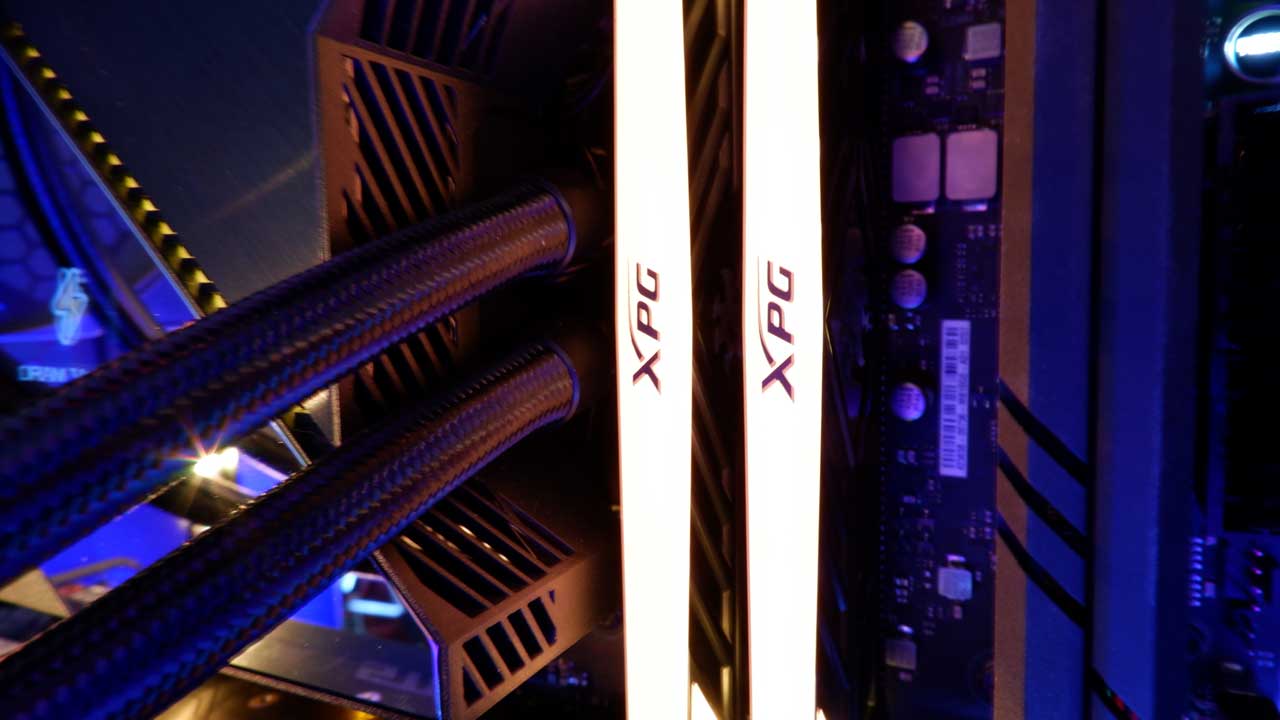 The top of the RAM modules glow, pulse and beat all depending on your preferences and how you have set up your PC.

So the brains of the whole operation are thanks to this monster of a motherboard. The ASUS ROG Zenith Extreme Alpha makes sure everything I have mentioned above runs and looks pretty all at the same time. It too goes hand-in-hand with the other ASUS ROG components to create a perfect ecosystem. 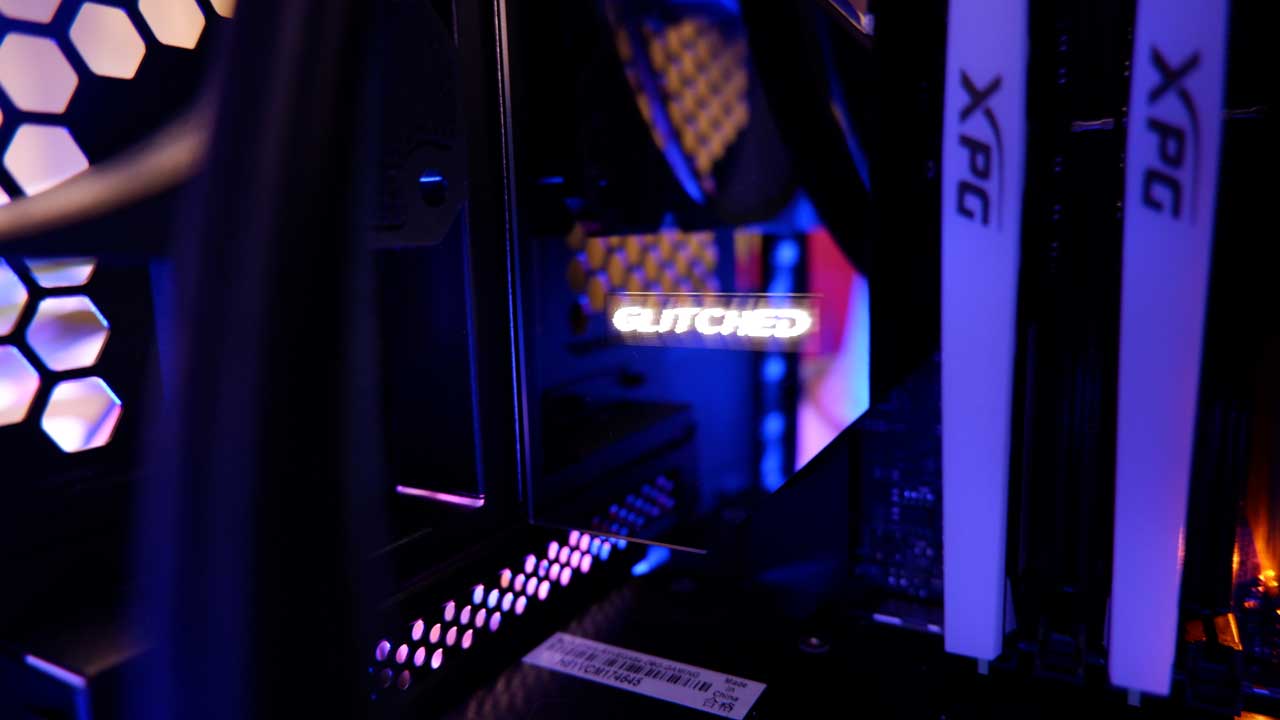 The board features a LiveDash similar to what we have covered on the Ryujin cooler and offers the same system readings as the OLED display on that component.

You can also load up a custom GIF to the display too which shows in a black and white animation. The motherboard has a strip of RGB lights underneath it that makes it glow as if it is floating in the case. There are also a few other strips which all work together with the Aura Sync system.

About That Aura Sync

I never knew I would love RGB after hating it for so long but ASUS makes it hard to hate on its Aura Sync systems. Whatever has “Aura Sync” slapped on it all integrates together to deliver a visual treat. The app then controls everything that is detected through the motherboard be it a GPU or even a strip of RGB lights. 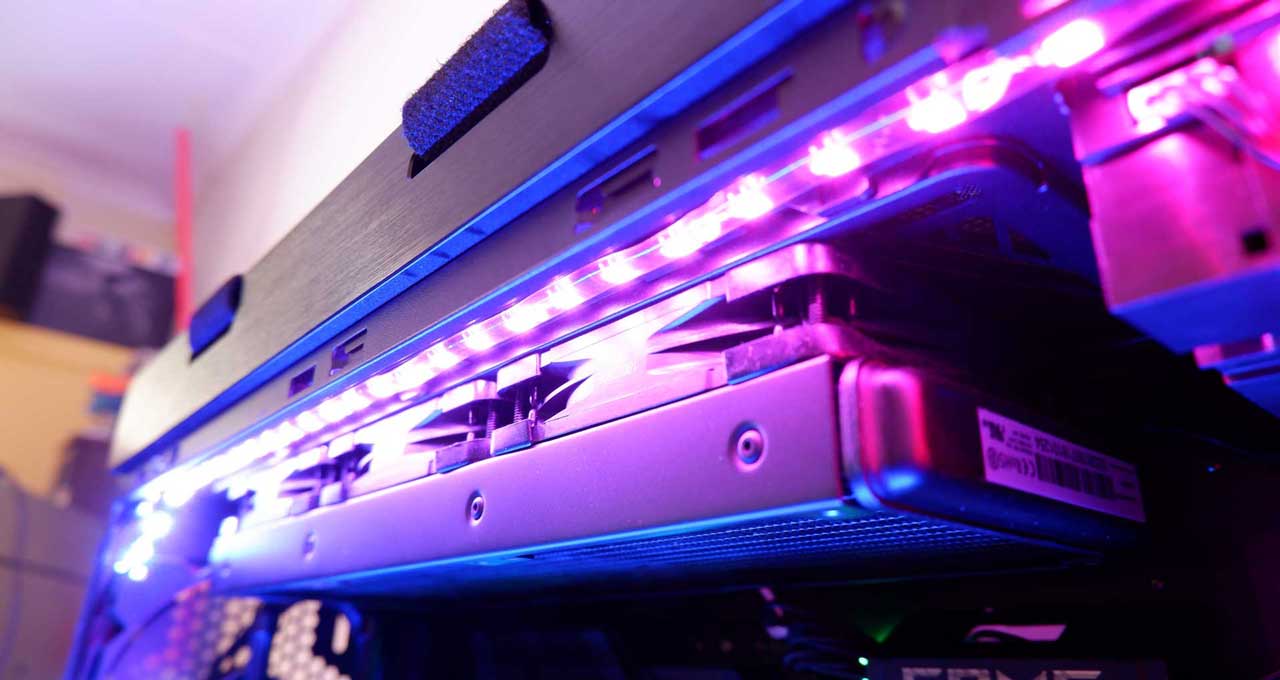 When you access the app, it is quite easy to use and you can go to town on all the customization options available. Be it changing the breathing speed of the rainbow effect of your lighting or just turning it off completely. Whatever it plugged in can be tweaked on its own or you can do a system-wide change that merges everything into one and makes them all work together.

For example, I set up a stary night sky which glistened throughout the PC. It twinkled on the GPU, then on the strip of lights and then on the motherboard. It was a small detail but something unique.

Everything we have covered up to now does a great job merging into this ecosystem that ASUS has created with its hardware. Not to mention the extra strips of ASUS ROG RGB lights that have been installed and also plugged into the motherboard to take advantage of the Aura Sync features too.

Dare I say it kind of feels like something as great as Apple’s ecosystem where you know if it has “ASUS ROG” written on it, it will just add to the already-exceptional experience the brand offers with the products you already own. 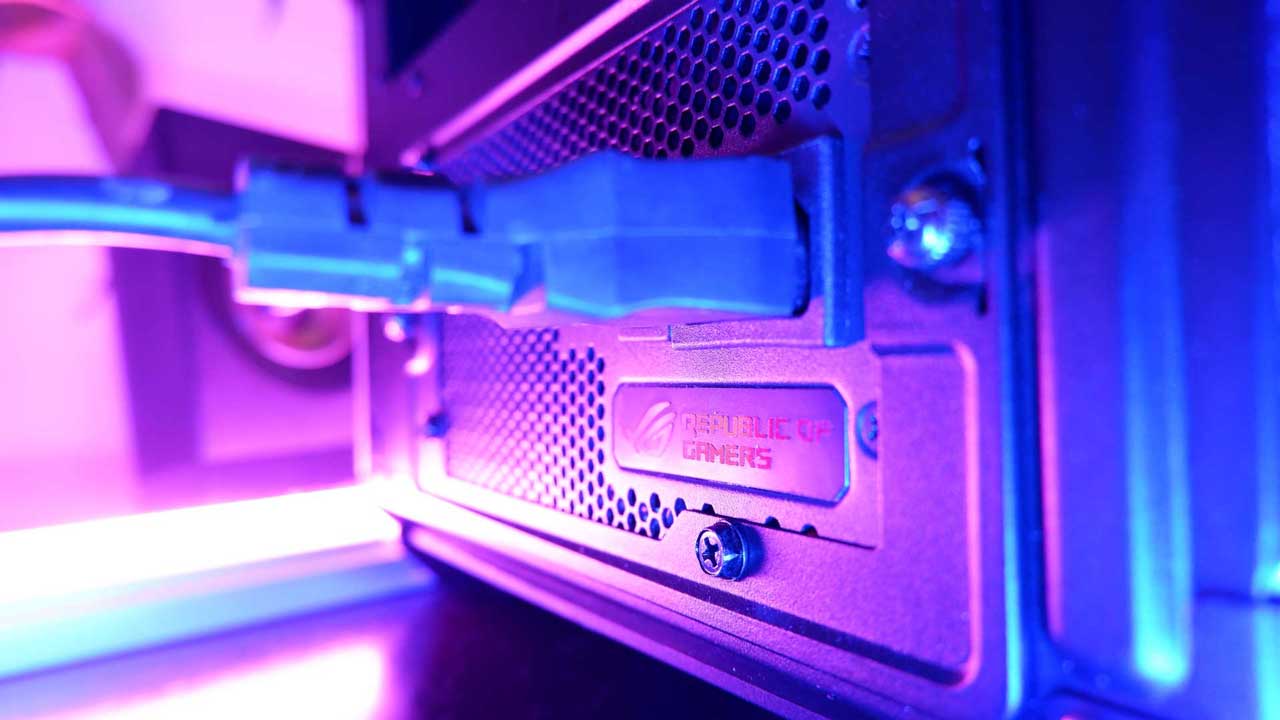 I could go out and get one of many other ASUS accessories like a headset or keyboard, plug it in and it will detect my preferred lighting and presets and just sync perfectly. This sort of integration is rarely seen in the tech world today.

The ASUS ROG Aura Sync really blew me away. It was my first time spending a good amount of time with so many ASUS products all in one awesome ASUS case and the way they all become one is its biggest selling point. 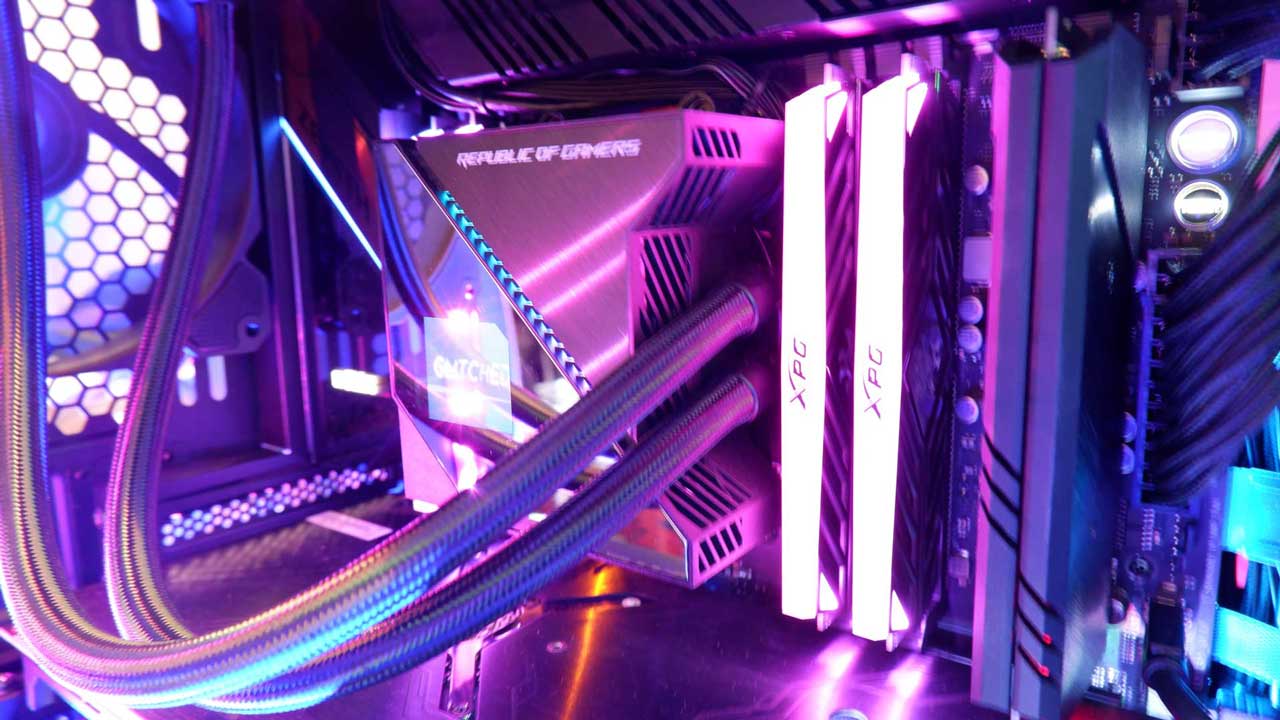 The Aura Sync gave me the ability to change the settings to fit my mood. The LiveDash features on the CPU and motherboard not only gave me more customization options but also a great insight into the hardware monitoring of the components and the ease of use of this all just made it so enjoyable.

Yes, it does force you to look out for what you are purchasing to make sure this hardware works with all the fancy features of your current hardware. But when you think about the cool things you could do with it all, it makes staying in the ASUS ROG lane much more enjoyable.

For those of you who are considering PC components, it may be an investment to start looking at some ASUS ROG stuff. Sure, it will take a long time and a bucket load of money to get to the point of this gaming rig but you can’t argue with this ecosystem.