Ubisoft hosted The Division 2 Private Beta this past weekend for their upcoming looter-shooter. The beta had a few servers issues, friend codes were not sent at all and the experience was a bit buggy but in general, it showed promise for the upcoming release.

Check out some gameplay from The Division 2 Private Beta this past weekend below:

Division 2 takes place seven months after the events of the first game. Instead of exploring The Big Apple, players are now dropped into Washington D.C in the middle of a civil war between survivors of the outbreak and a load of bad guys that are using the whole “end of the world” thing to take over the state.

The Division 2 Private Beta included a taste of the multiplayer, a selection of main missions as well as side missions to complete. In terms of progression, there were a handful of skills to use and some of them locked out of the roster. 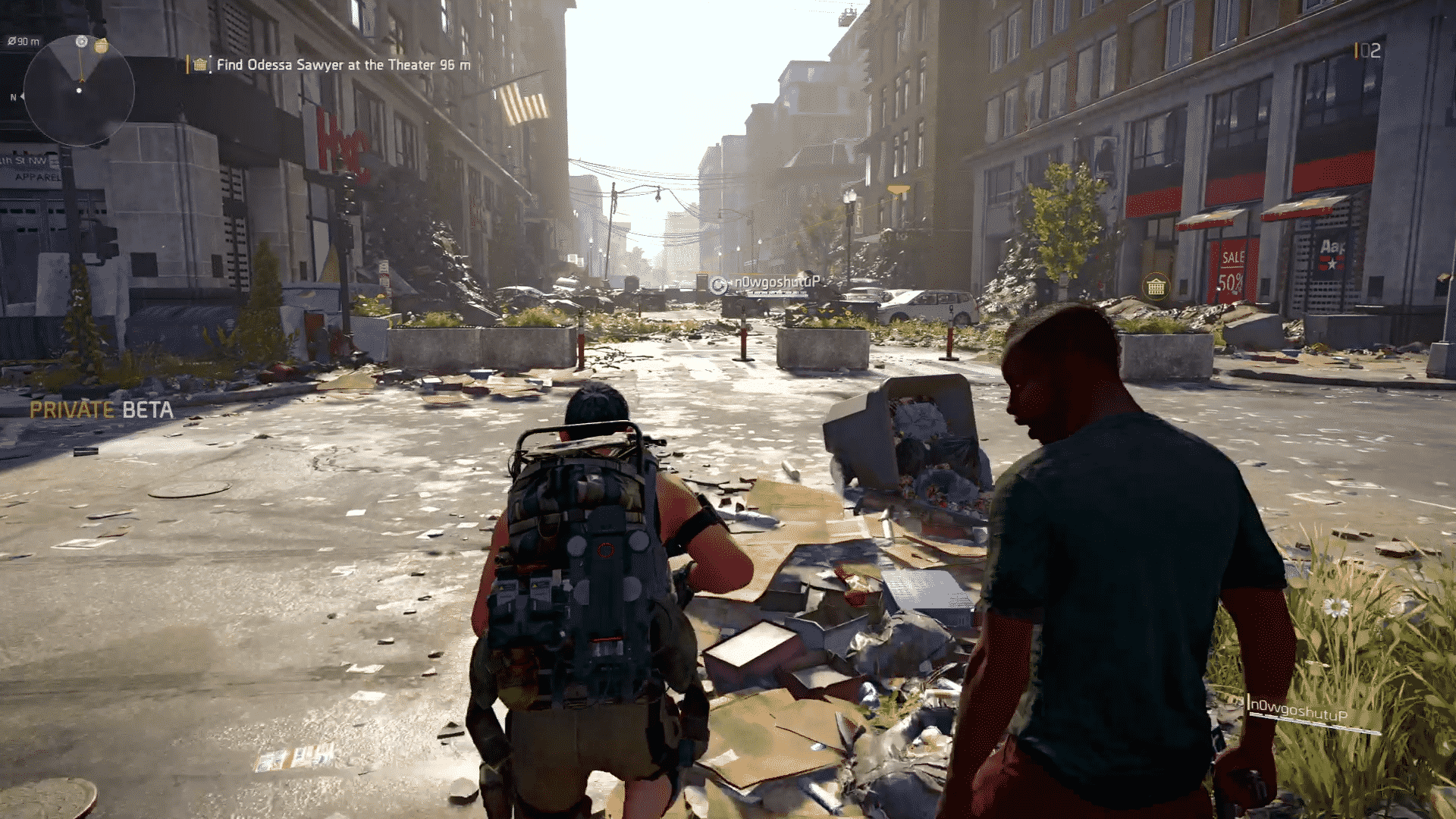 Basically, the Private Beta gave us a taste of the intro to the game. After a cool cinematic, we were dropped just outside The White House with an objective to kill the attackers and secure the building. The White House in Division 2 acts as the Base of Operations, similar to the Pennsylvania Plaza from the first game.

Here you will sort out your loot, buy new things, upgrade skills and of course contribute points to different wings in order to progress and unlock new perks and skills. The systems in Division 2 are pretty much the same as the first game. They worked then so why change them? 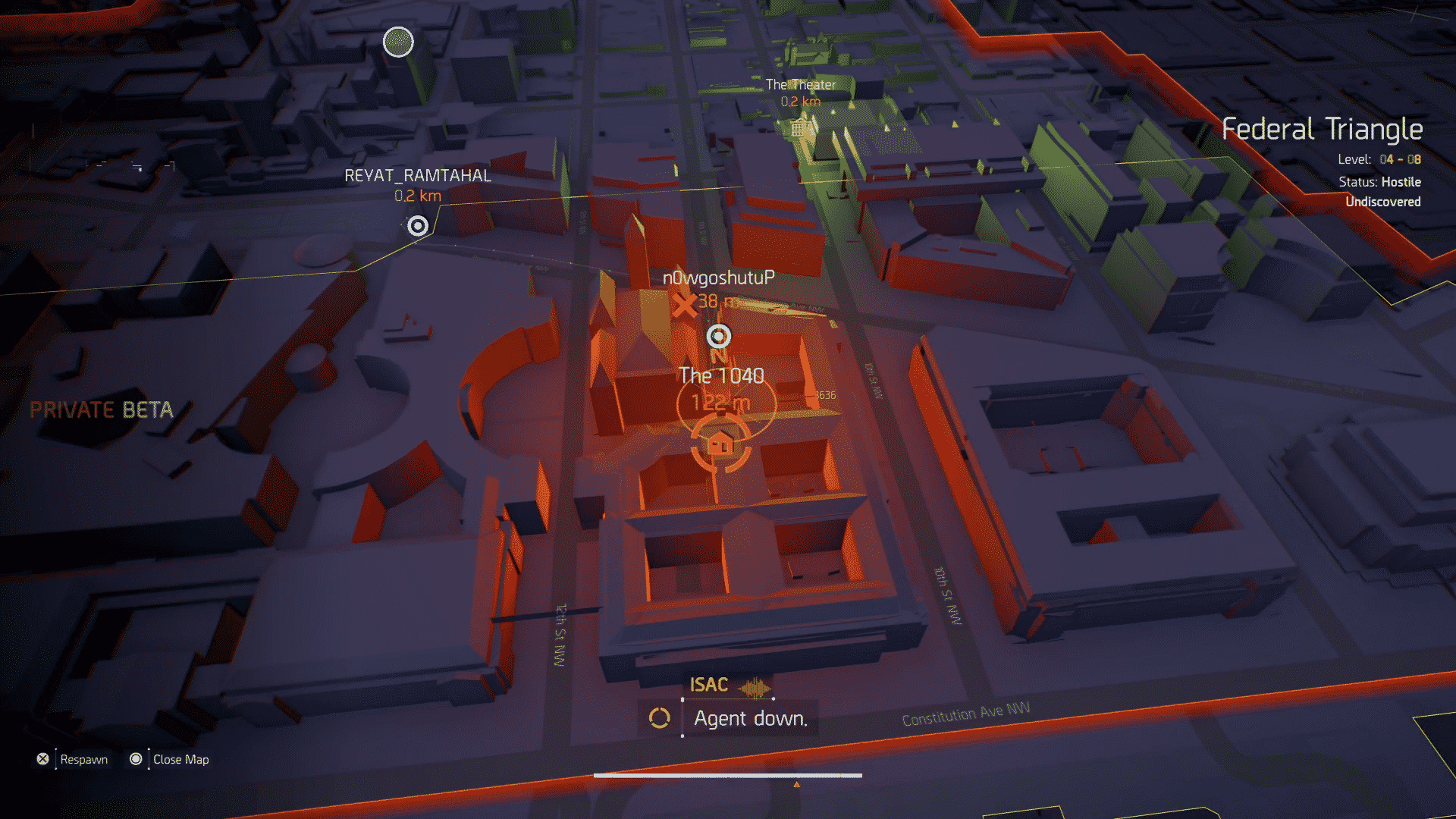 There is a lot to digest when it comes to how the game works and how everything comes together. The first hours are strictly there for you to learn the ropes and the beta did a great job explaining it all to you.

You can equip two skills assigned to two buttons. Each skill has three variations that need to be unlocked. The drone, for example, can heal you or you can make it attack enemies. This skill tree-like path lets you focus on creating the ideal character build for every situation. Seen as the game will have 8-player Raids, we can see this being beneficial when you need to make use of every player’s skill set. 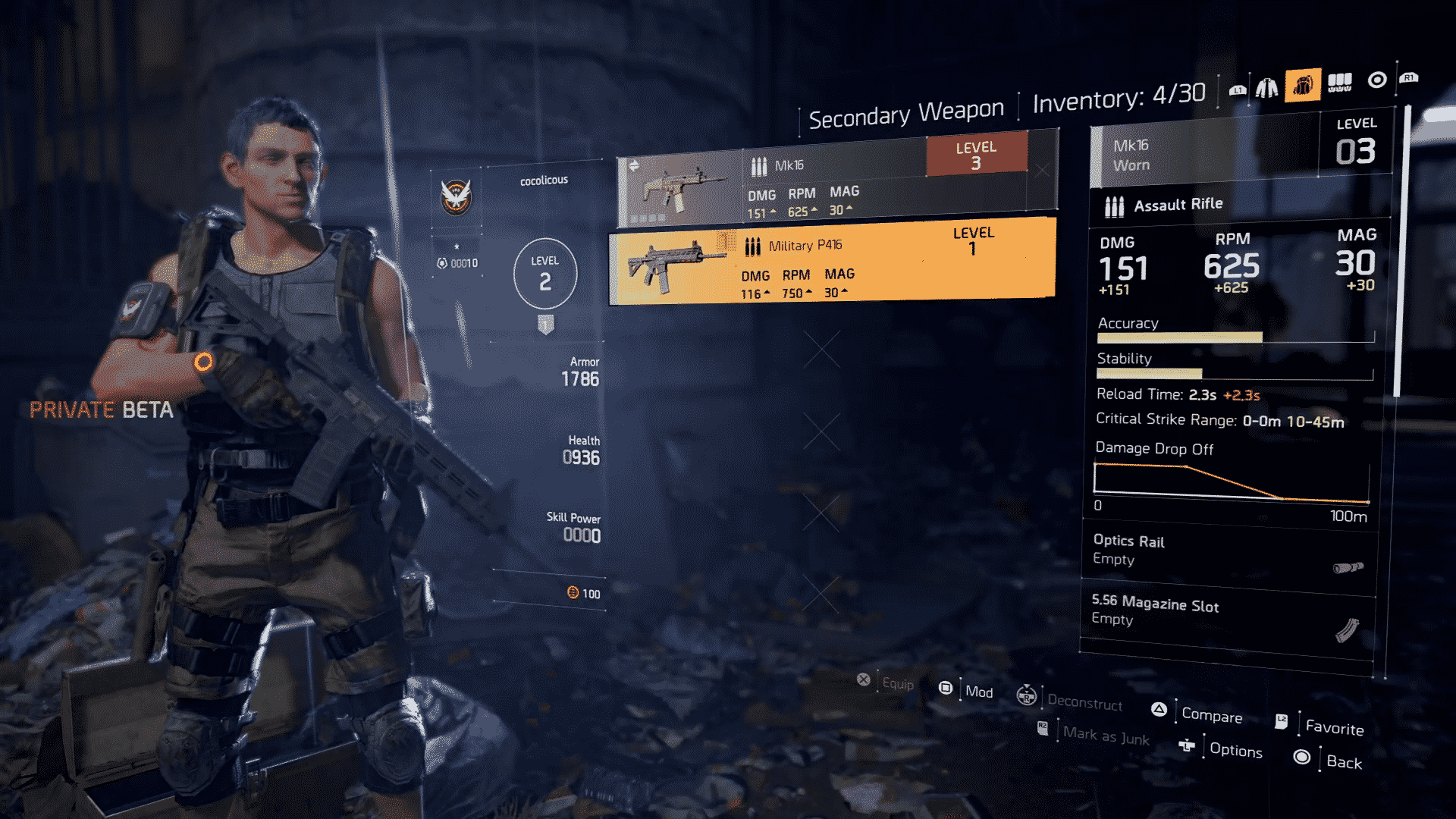 Combat in the game is as refined as ever, given you don’t lag around or the game’s performance jitters like crazy (it was a beta, we forgive them). Enemies attack in groups and you need to take them out to the best of your abilities and weapons.

Cover was key in the first game and nothing has changed in that department. Stand out in the open during a gunfight and you will get shot from every location and die. Luckily the cover system works very well. You can duck behind it, move your camera around to eye out the next barricade and sprint there. If you deviate from the path, you will then be able to move wherever you want. 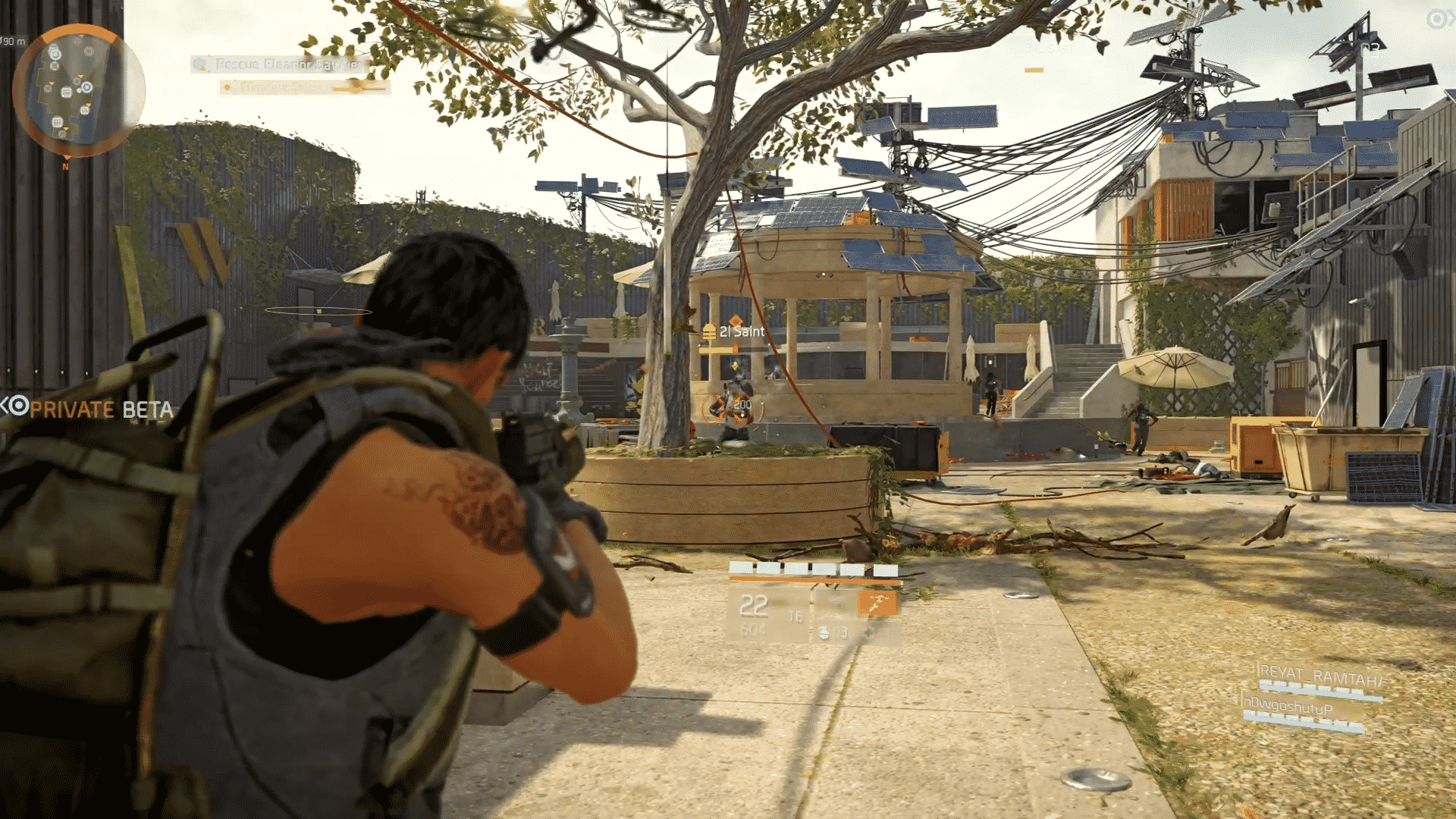 It is all about being tactical and inching your way closer and closer to your enemies as you take them out from any position. Of course, playing in a group is the best way to experience the game and anything we did was easier, more strategic and a lot more fun with friends. The one mission saw us head through a hotel to the top and take down an armoured baddie. The trip up was filled with crazed enemies from shotgun attackers, snipers and the craziest of them all, the melee guys.

These melee enemies have nothing better to do with their time but run around and try smack you in the head with a bat. They are probably the strongest enemies and they don’t value their lives at all. One of our group members fell victim to these bats quite often and it was hilarious to witness. We would not go as far as to say that everyone had a role in our mission. We were all just shooting, reviving where we could and using all our abilities to the max. However, if we remember the first game, halfway in, everyone had their own job and it worked well. We hope Division 2 further expands this making teamwork even more fun and important. Ubisoft made sure to work on the endgame which means we could see this happen.

Outside of the mission, the streets of Washington D.C are filled with things to see and do. We stumbled across this “takeover” event where we had to keep the enemies away for a couple of rounds in order for us to take control of the area. It was challenging and rewarding. There are also various collectables to find that you would remember from the first game. We especially loved the recordings that gave us insight into the people and events prior to us arriving in the area. They are back for our listening pleasure. 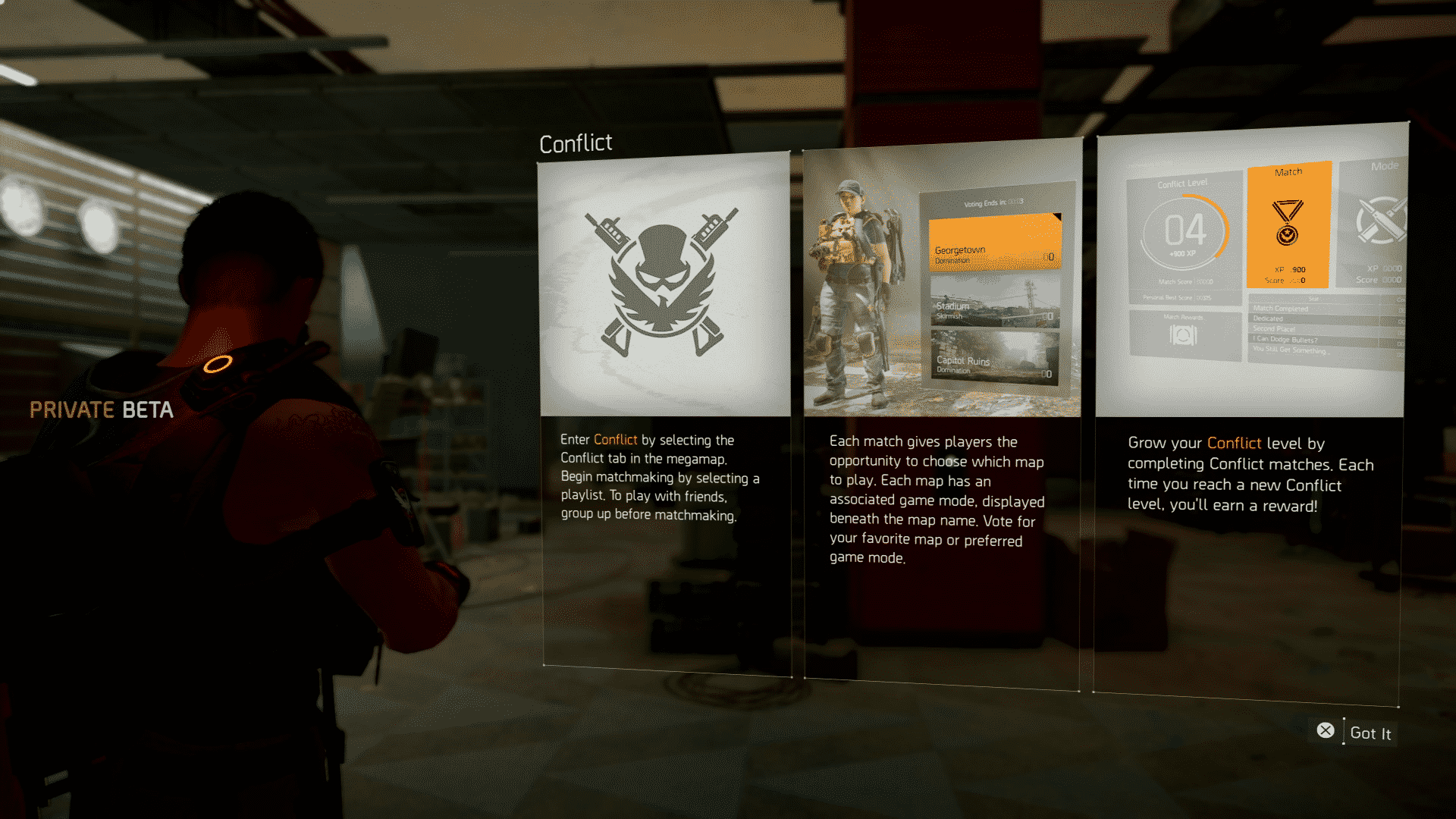 Of course, your character is the most important part of it and the skills, gear and weapons you find will help you build the best class possible. There are some weapons that feel very underpowered right now like the SMG that just spray bullets, very inaccurately I might add, and do very little damage.

I loved the auto rifles as they allow you to sit back, take your time and get some headshots in. These will most likely be the ones I use in the main game. Lastly, we have the PvP side of the game. During the beta, one Dark Zone area was accessible. The end game will have three. Once you hit level five you can enter it. 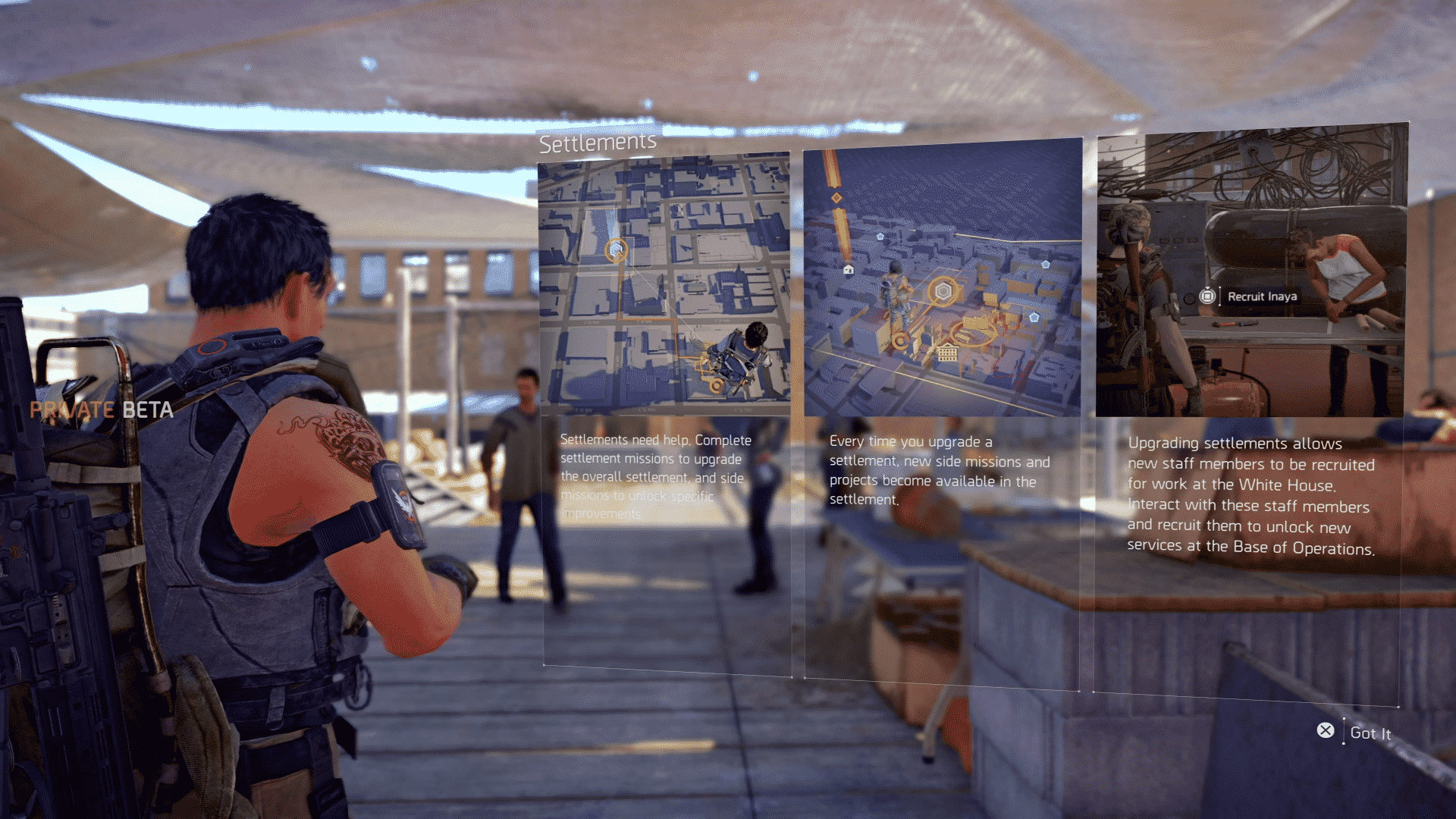 The PvP part of the game has a separate progression system in Division 2 and your level will determine what perks you have available while you explore this PvP area. These perks range from being able to carry more contaminated gear to increased XP gains for specific Dark Zone activities.

The Dark Zone features some cool new things to see and do. First off, gear is now normalized for every player. Taking away any advantages they may have for playing hundreds of hours and having the best equipment. The only advantage they have now would be the perks they unlock through the Dark Zone level system. 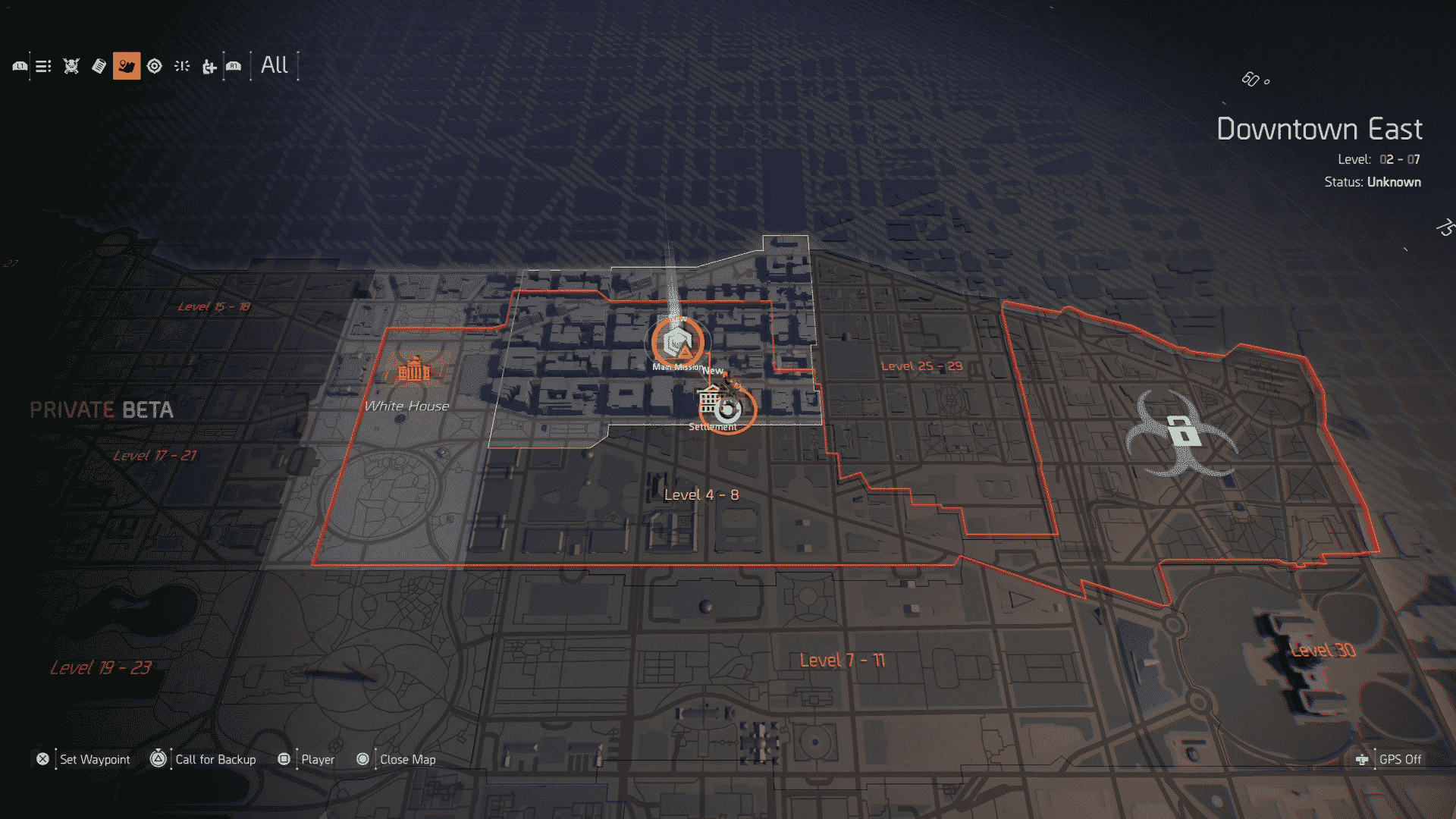 Rogue Agents can now also have the best and worst time of their lives inside the Dark Zone too. There are new levels of rogue agents and the more you go rogue the higher your level goes. You will be marked a Manhunted Rogue if you really go at it making your head a target for everyone. You can run away or try track down the Thieves Den which is a safe haven especially set up for Rogue Agents. You will have to complete specific challenges to discover this location.

PvP in the first game was not my forte and I don’t think I will spend much time playing in the Dark Zone in Division 2, however, the tweaks make for a welcomed change. 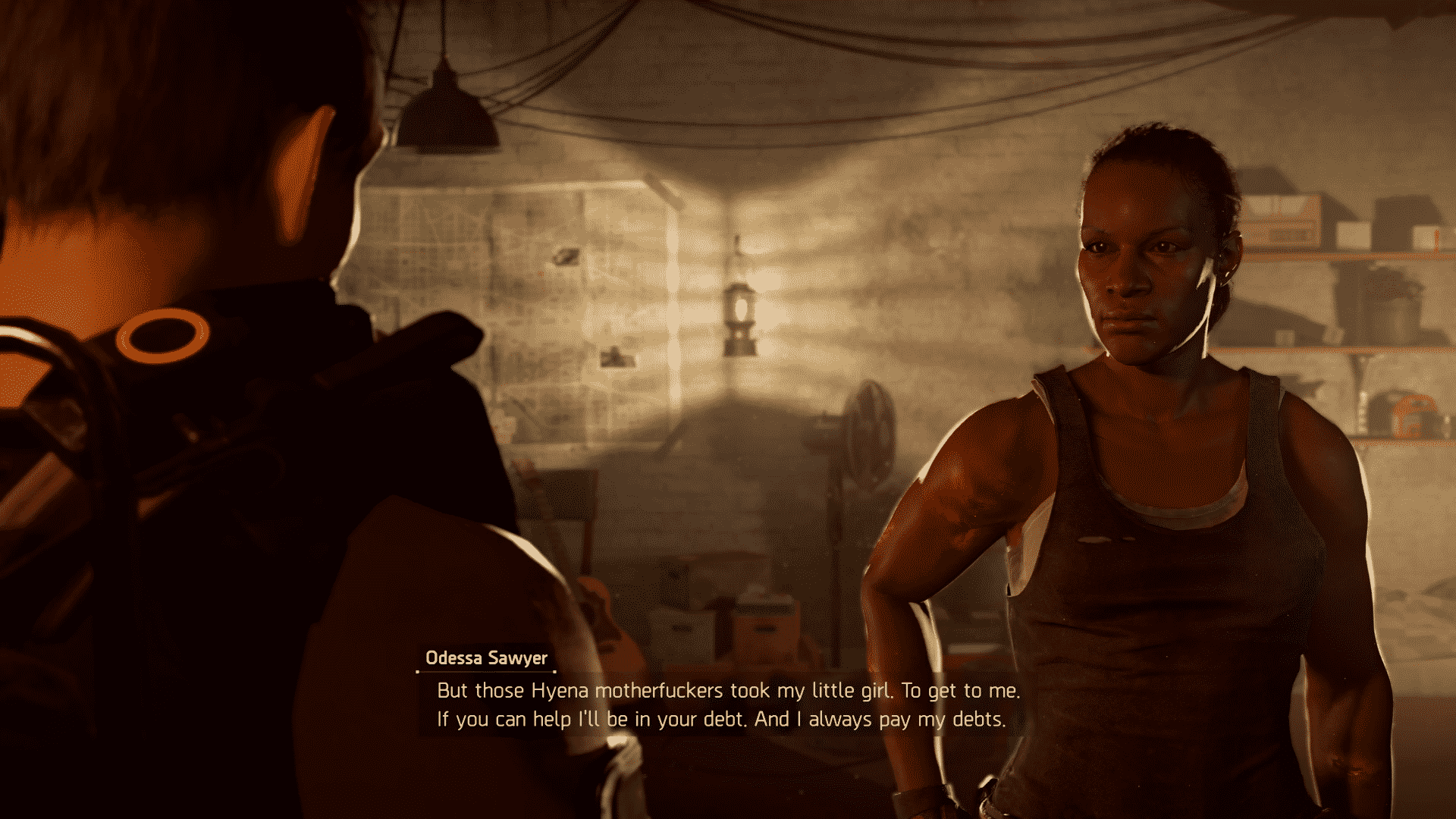 So far so good with Division 2. The Private Beta showed that very little has been changed in terms of the game’s core and that is a good thing. The true question is whether or not Ubisoft will get the endgame right now. A few weeks after the first game’s launch, there was nothing to do and millions of players jumped ship back to Destiny. The Division 2 needs to nail this down and keep players coming back for more.

The Division 2 releases on 15 March for PS4, Xbox One and PC.

Gaming | PC | The Division 2 Private Beta – Does Ubisoft’s Shooter Do Enough to Stand out?