Returning back to Skyrim has never arrived at a better time. The latest Elder Scrolls Online: Greymoor expansion has welcomed a new region to Tamriel that takes you to Western Skryim. For those who don’t know, this region in the original game spans the city of Solitude and its surrounding areas. The lands will be familiar to anyone who has played the original game and the developers have done a great job to bring the land to life in the MMO.

Sure, the experience lacks the depth and story of The Elder Scrolls V: Skyrim, but the landscape has never looked better. In addition, Western Skyrim is just a portion of the original game’s landscape which also takes away from the “returning to Skyrim” idea here. Regardless. Greymoor is the darkest story yet in The Elder Scrolls Online and while it doesn’t last that long, it took me on a mysterious journey to not only the lands above but the dark chasms below. Best of all, the expansion brings vampires and reworks the skill tree at the same time.

Greymoor marks the second release of content in the current “Dark Heart of Skyrim” year-long adventure. The original Harrowstorm DLC arrived with two new dungeons and a decent prequel chapter. This content helped set up the plot for the Greymoor chapter. After investigating an assassination on the Queen of Morthal, you set forth on an adventure to discover a dark threat looming beneath Skyrim. The expansion is divided into two major areas. You have Western Skyrim above that packs some new public events in the form of Harrowstorms, some world bosses and great side quests to take on. In addition, the second location is a massive cave-like region called Blackreach.

In terms of content, the expansion has a couple of hours worth of things to do. Ten Harrowstorms, six world bosses, two public dungeons and six delves. It’s a lot and the fact that the content spans both Western Skyrim and Blackreach means each area offers a refreshing visual approach to the exploration. Players can also now own their very own home in Solitude. Another Blackreach home will also be available in the future. 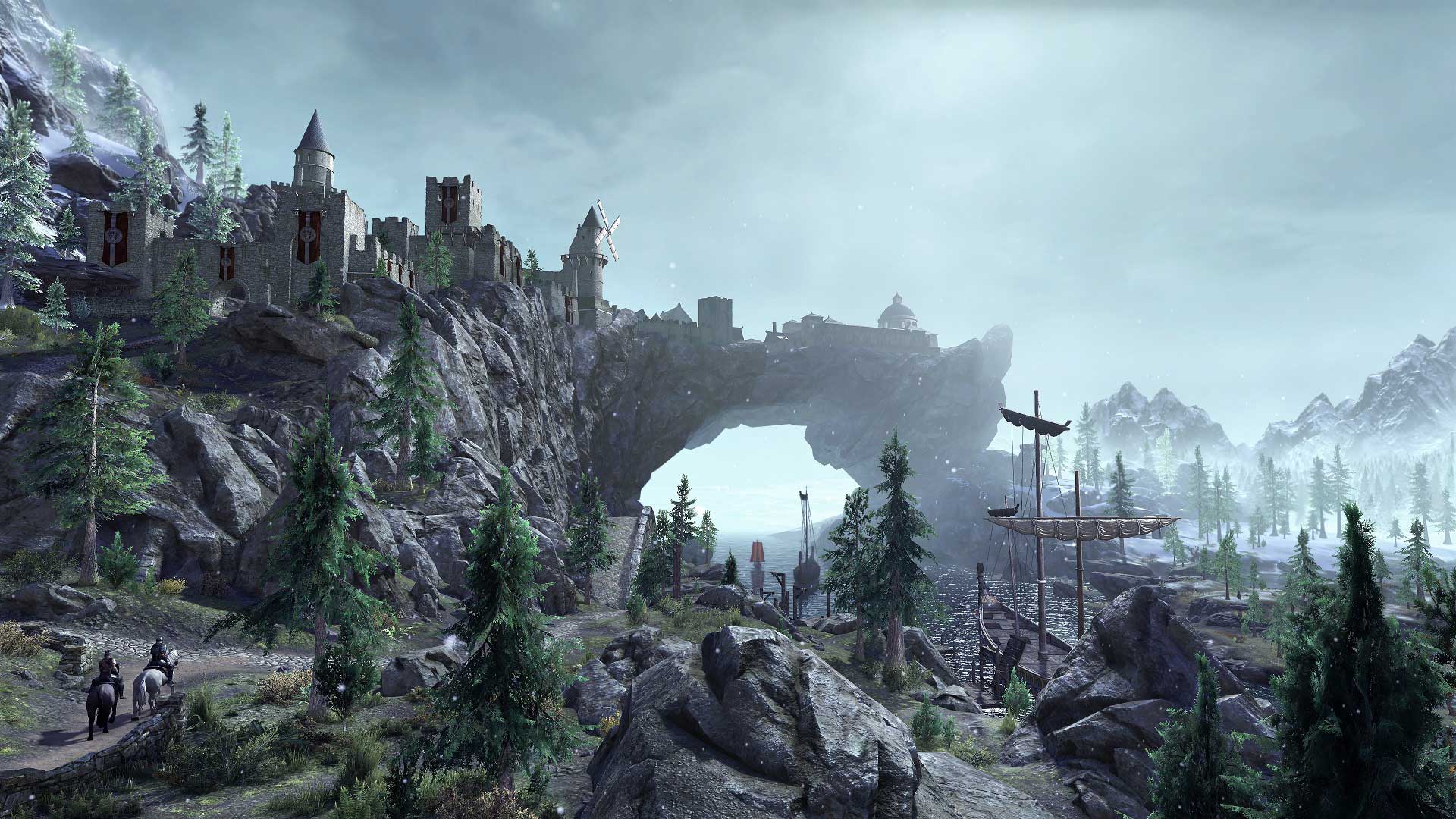 It takes about an hour before you will discover Blackreach. The story forces you into the area and upon finding it, you are then free to explore it and complete the zone objectives. The main story will last you around four hours. Throughout, you will face some deadly vampires, werewolves and discover the giant underground fortress called Greymoor. It is also great that Lyris Titanborn accompanies you throughout the grand adventure. She makes for a welcome change from the past male-led Elsweyr content.

The real chunk of The Elder Scrolls Online: Greymoor comes into play when you complete the story. Daily quests let you earn and unlock specific Greymoor loot, Harrowstorm public event farming is damn fun, and both Western Skyrim and Blackreach offer loads of things to see and do. Harrowstorms are the new world events that see massive red storms form in an area with deadly bosses. Joining a Harrowstorm group is fun and running to and from each one of them while killing bosses and looting corpses kept me entertained for a couple of hours. 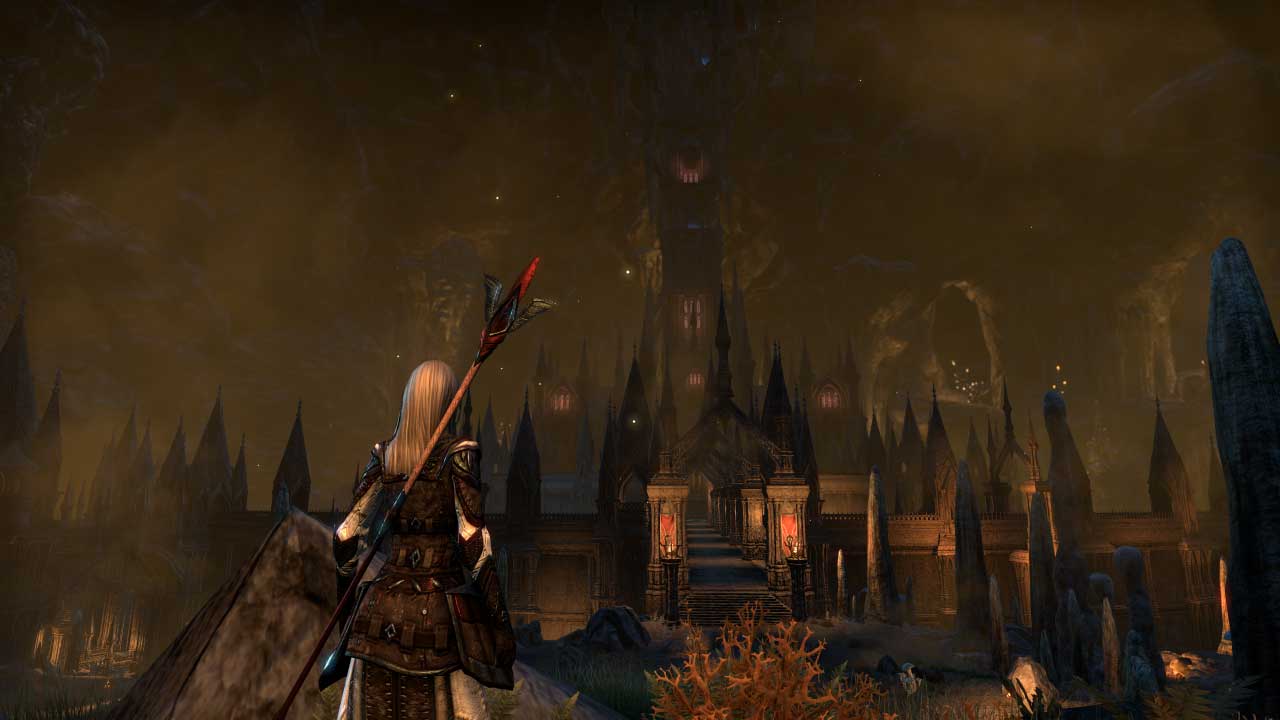 However, apart from the actual regions, the new Antiquities system is a much-needed break from the grind of the game. The new skill line lets you explore the whole of Tamriel for buried treasures. First, I had to scry for a treasure by completing a puzzle. This required me to join a line of symbols to link a node. Once done, the possible location for this treasure was marked on my map. Depending on how well I performed at the puzzle, would depend on the number of possible locations. Luckily, you can always retry the puzzle to nail down one location making it easier to find.

I then had to travel to the area and look for a sparking pile of dirt. This would then trigger another puzzle-solving mini-game where I had to dig for the treasure using skills on a grid-like system. You only have a few moves to find the hidden treasure and there’s also an opportunity to find extra loot while you are at it. If successful, I earned a treasure which goes towards a collection. Every region has a set number of things to find. These treasure range from gear, loot, home items and even things you can sell for high prices. 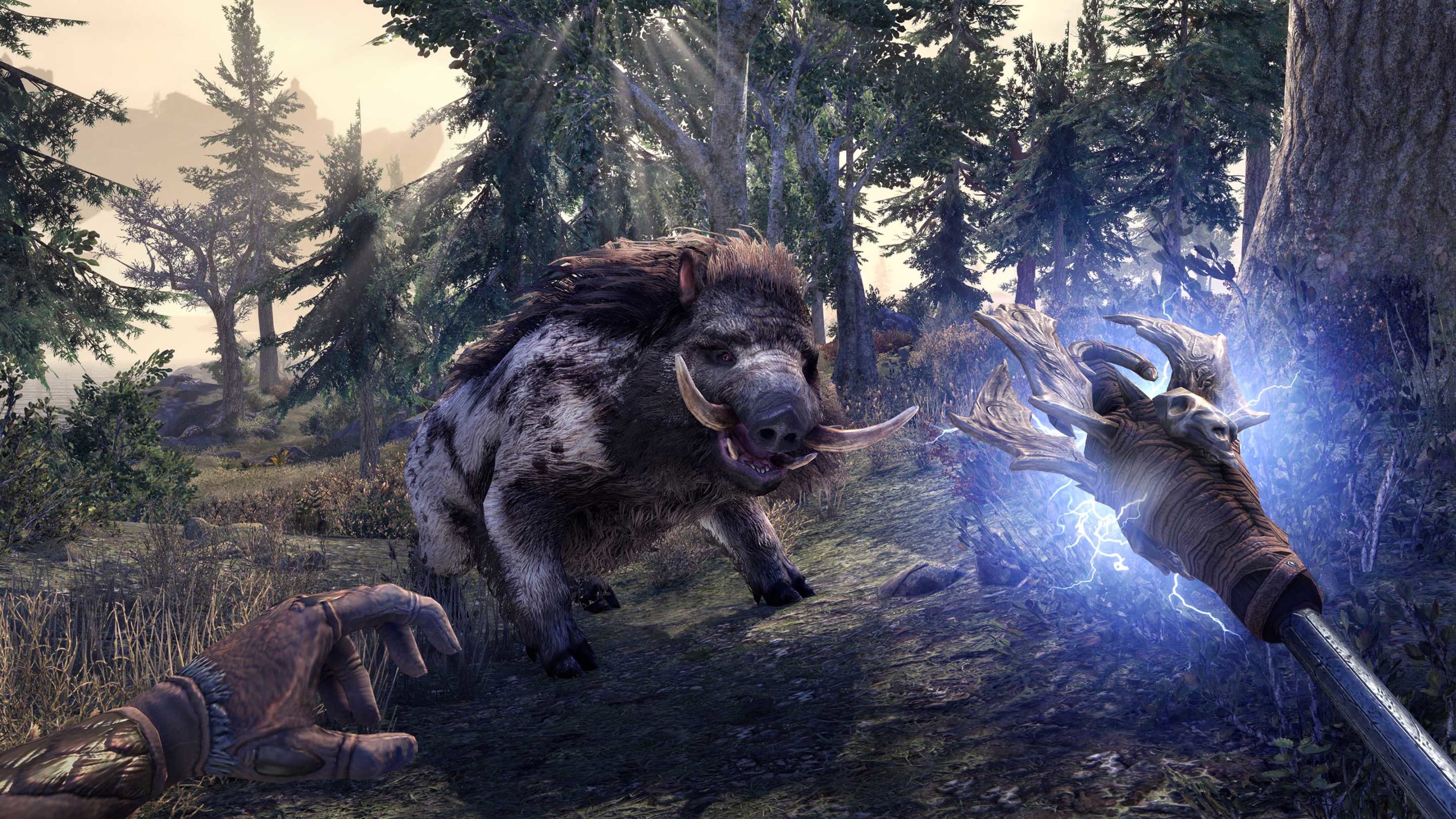 The new Antiquities system also has its own skill line. However, while the mini-games are fun, I won’t be rushing to max this line out anytime soon. These skills increase your abilities during the puzzles and the number of times you can brush the dirt away. They don’t tie into the main game much so if you have extra skill points then you will use them in the tree. However, there are a lot more important things to spend on than this new system.

I enjoyed the Antiquities system. I have a lot of love and respect for game’s world so being able to explore places I had never been before was a great way to get the most out of the gorgeous land of Tamriel and beyond. It also offers some fun ways to discover lore about a region and get items at the same time. Not to mention, the mini-games are quite fun. 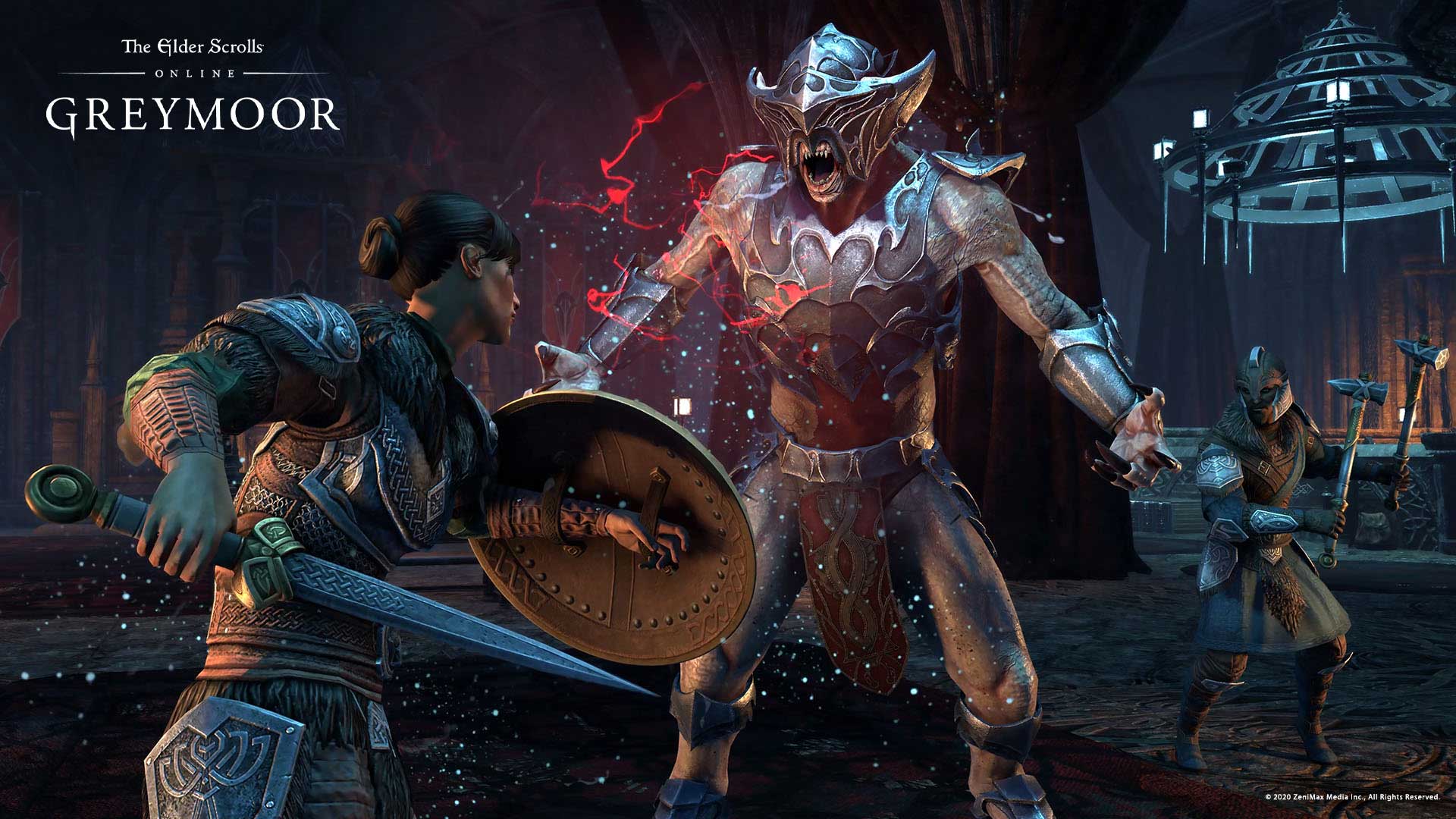 We then have the new Kyne’s Aegis trial which is the real end-game content in Greymoor. This takes players to a massive island as 12-players fight through three intense boss fights to get loot. The sets include the new Roaring Opportunist set that buffs 11 players in a trial or dungeon, and Vrol’s Command that applies Major Aegis to 11 players and the player for 10 seconds reducing damage taken from Dungeon, Trial, and Arena enemies. While the sets are great, they all revolve around buffing a large group of players. The only single-player set is Yandir’s Might that adds stamina recovery for critical hits the player performs. I won’t be grinding for these sets any time soon. While I am sure there are people out there that love the sets, I will stick to my Valkyn Skoria and Mother’s Sorrow build.

Of course, Greymoor is not without its faults and there are many. Zenimax has yet to fix the constant booting of players from the server while loading into an area. This issue has been present on consoles and PC for months and nothing has changed in Greymoor. There’s also the usual toxic community of players. Some of the worst in gaming, I might add. 810 CP players believe the sun shines out of their behinds and often leave dungeons and kick you if you are not over 300CP. It makes group content very challenging. The game’s community is quite unpleasant to be around. This is a problem I have faced on both PC and console. 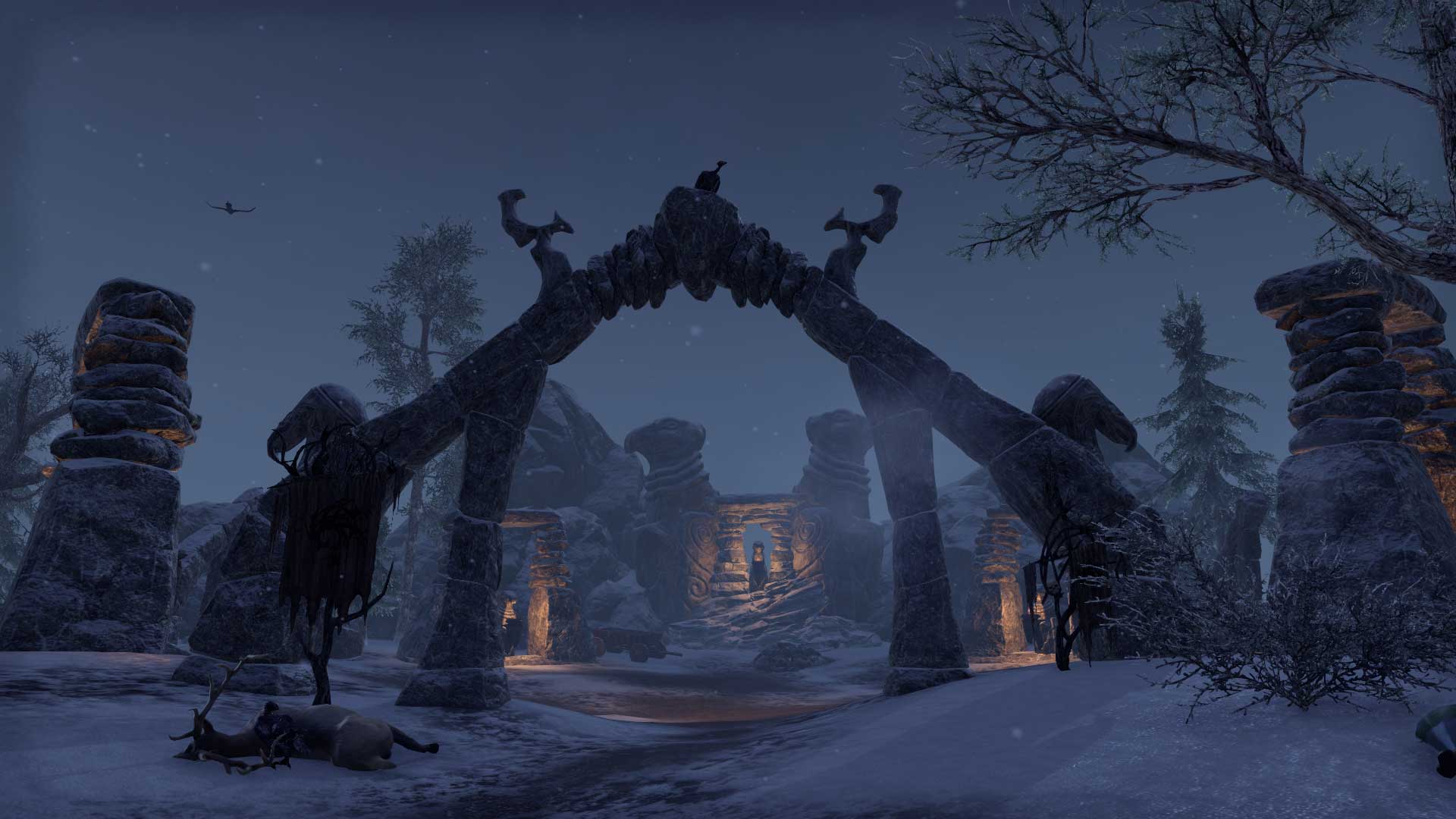 The Elder Scrolls Online: Greymoor is a chunky expansion with a lot of things to see and do. Is it worth the price tag? Perhaps not. The expansion has no new class or race, Western Skyrim is small, and the main story is quite short. It is a pity because in August, Zenimax will release some more paid content for the game to end The Dark Heart of Skyrim year. Players will have to fork out even more money for this to complete the adventure. It just never ends. However, hardcore fans will find something to love here. The Trial is enjoyable, the Harrowstorms are fun and exploring Skyrim is a real treat. The price of the trip is just a little too high for this content.

For those looking to invest in the Vampire skill tree, it has also been reworked in Greymoor. Along with new animations, the skill tree also has a Justice System. The expansion takes advantage of the current skill line to offer new builds to players. It is only fitting considering the whole expansion is about a crazy vampire lord and his army trying to take over the whole of Tamriel.

The Elder Scrolls Online: Greymoor takes players back to Skyrim but its asking price is a little high for what it has on offer. There’s a lot to see and enjoy here but in comparison to last year’s Elsweyr expansion, it feels empty. Not to mention the story is not even complete yet and later this year, you will have to fork out even more money to get content.

This The Elder Scrolls Online: Greymoor Review is based on a code sent to us by Bethesda.