The Gardens Between Review

The Gardens Between Review

The Gardens Between by Voxel Agents is a puzzle game about two friends, Arina and Frendt. The interface allows for only three controls; two that either move time forward or backward, and one to interact. But it is also so much more than a simple puzzle game.

It is a kaleidoscope of love that is gift wrapped in exquisitely handcrafted paper.

Related: Under the Radar Games we Cannot Wait to Play

Have you ever played with a kaleidoscope? I owned one as a child, and I remember the magic of it so clearly. I would gaze into the tube at the ever-changing images; fascinated that such a simple thing could conjure such a variety of wonders. 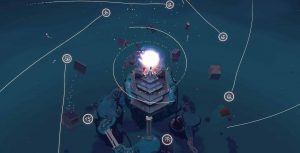 The Gardens Between allows the player a look at the friendship that formed between two neighbours. Like a kaleidoscope, each turn shows a memory shared. It is a simple game, yet it holds a depth and beauty that touches the heart. The original Greek meaning of the word “kaleidoscope” means

the observation of beautiful forms

and it is a fitting description of The Gardens Between.

We meet Arina and Frendt on the evening of their last night together. As they sit in the tree house of the garden between their homes, they are swept away into a surreal world that is constructed of different islands, each representing a cherished memory. As you navigate through each island, you rebuild a memory, and at the end, you’re rewarded with a beautiful moment they shared. 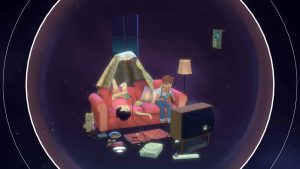 Although The Gardens Between reminds us about the beauty of simplicity, it is by no means a simple game. The controls are laughably easy; forward, backward or interact, while the puzzles range from easy to mind-boggling.

The goal with each puzzle island is to reach the top where Arina and Frendt have to insert a light orb into an altar. Along the way to the top, you will use the light orb to overcome obstacles, and you’ll have to find a way to regain it before you reach the end. The puzzle-solving mechanics include things like manipulating objectives while time is frozen or using light to clear a path. 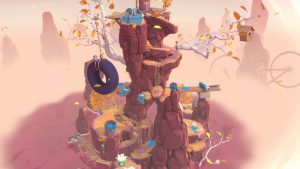 Each ‘memory island’ includes at least one unique puzzle mechanic; be it arranging debris to align so you can jump over a stream, or manipulating dinosaur bones to ring a bell. There are even jumping cubes that morph into a video game inside a TV screen. The bulk of puzzle solving, however, is repetitive manoeuvres, but it is never dull. Some memories require you to navigate through more than one piece of the island to unlock the final memory, as if in stages. Like that time Arina lost her jacket in the sewage pipes.

Completing a puzzle island is fun, engaging, and there’s never a dull moment. 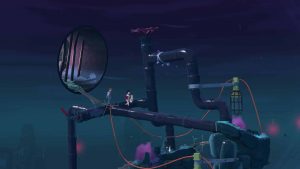 The Gardens Between has some of the most exquisite graphics I’ve ever seen in a puzzle game. Every scene looks like a master painted it. Every moment oozes ‘feeling.’

There is no dialogue and no text. Voxel Agents uses colour, movement, and music to convey the innocent beauty of the relationship between Arina and Frendt. The music infuses the game with a meditative quality that highlights the quiet strength of their relationship. 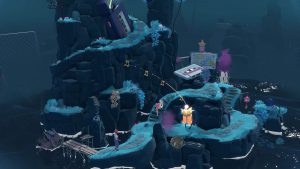 The Gardens Between is a must play for puzzle game lovers. It is a game that appeals to young and old, and it reminds us of the wonder of shared experiences.

Playing The Gardens Between is an exceptional experience. It is both innocent and wise, profoundly beautiful and sad, and I highly recommend it. I played it on PC, but I can imagine that playing it on the Nintendo Switch would be even better. It is the perfect game to play while you have a few minutes open in a busy schedule. It is easy to pick up and continue even between puzzles.

I spend a lot of time taking screenshots and marvelling at the art, and it still took me only about four hours to complete the game.

This review is based off a review copy sent to us by Voxel Agents.

Gaming | Nintendo | The Gardens Between Review