The fourth day of The International 2019’s Main Event delivered some fantastic matches yet again, with two teams being eliminated and four others moving one step closer to etching their name into esports history. First, let’s look at The International 2019 results for Day 3 of the Main Event, then move on to the Day 4 schedule in South African time.

The final match of the tournament was arguably the most-anticipated. OG versus EG. In the first match, EG took a commanding lead and just kept their lead from start to finish, crushing the defending champions in around 30 minutes. After a long break, however, OG took to the main stage yet again and this time, the early game went much better, as OG continued to taunt EG and took down RTZ over and over again spoiling his Terrorblade early game that wrecked OG in the first game.

EG, however, fought back hard and at 25 minutes in, you could see it was an absolute slugfest with 40 kills total in the game. With some insane wombo-combo moves, OG managed to break EG and take the first lane of barracks. OG continued their dominance finding more kills, more insane team fights and finally, managed to close out game 2.

Game 3 was pretty even for the first 10 minutes but then, after a few pickoff kills from OG, the defending champions just started to run away with it. RTZ’s Antimage simply couldn’t come online in time as OG destroyed structure after structure until the last throne fell, smacking EG down to the lower bracket. With this, OG secures themselves a top 3 finish at The International 2019 and they move ever closer to becoming the first ever two-time TI champions.

Image of standings and 23 August matches highlighted by Wykrhm Reddy. 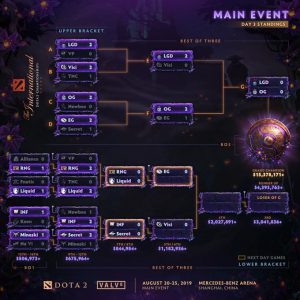 Infamous is the first South American team to ever reach the top 8 of The International 2019 after taking down Newbee 2-0 in the lower bracket. Newbee and Mineski walks away with over $675,000 for their efforts.

Matches are scheduled to start at roughly 04:00 – 05:00 SA time on 23 August but as things have been going, the first match might start a bit later. We will also see the All-Stars match, that might take place before the main matches of the tournament. After the initial match, the next one will start until the day is done, so it all depends how long the matches last.

We only have Lower Bracket matches tomorrow and there are a total of three of them, which means three teams will be eliminated tomorrow, ending their search for the Aegis of Champions.

Check out the TI9 Main Event schedule for Day 4 matches below:

What do you think about The International 2019 results for Day 3 of the Main Event and which teams do you think will come out on top in Day 4? Let us know in the comment section and find the stream for the tournament embedded below for your viewing convenience.