Check out the graph from Dota 2 Prize Tracker below. 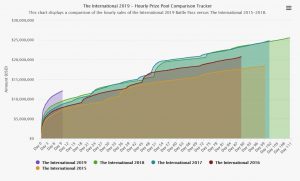 Keep in mind that only 25% of proceeds from Battle Pass and related item sales go towards the prize pool, while 75% goes to Valve, so the developer is definitely raking in the green right now. Valve did, however, sponsor $1.6 million of this prize pool, which means that Battle Pass purchases have brought in $10,483,797 so far.

As is tradition, we should also see big spikes in the prize pool graph every time Valve releases an update to the Battle Pass or a new treasure.

How big do you think The International 2019 prize pool will be this year? Let us know in the comment section and don’t forget to check out our Battle Pass level 100 opening if you haven’t already.

Gaming | PC | The International 2019 Prize Pool Blasts Past Million
a