The International 2019, the biggest esports event of the year with the biggest prize pool in esports history (now at $32.6 million) kicks off this week with the group stages. The group stages will begin each day at 03:00 South African time and every Dota 2 fan should be extremely excited for this mammoth event to begin. For the pros, it is the tournament they all want to win, but there are only 14 players that could become The International two-time champions.

So who are these players? Well, the entire OG team is there as they are the defending champions (and underdogs) even though they made no roster changes. Then, we have four players from Team Liquid, as they replaced Matumbaman, who then became the only player to qualify for The International 2019 twice with Chaos Esports Club.

Check out the full list of The International two-time champion hopefuls below in an image by the talented Wykrhm Reddy. 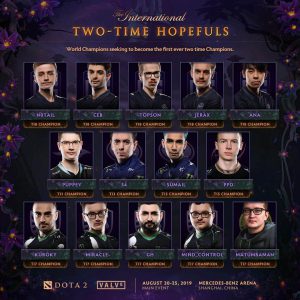 In case you’ve been living under a rock since August 2018, you would know that OG, against all possible odds, became The International 2018 champions, breaking curses, shocking fans and crushing every opponent in sight. For me, if I had to think of one team who can defy the odds yet again this year and become the first-ever two-time champions and the first team to successfully defend their title, it might just be time.

Do you think there will be a two-time champion this year? Let us know in the comment section below and stay tuned for more coverage on the tournament as we will have daily articles, Fantasy Challenge picks, results and more as the tournament gets underway.