The Nintendo Switch OLED is Actually Worth That Extra R1,000
LATEST CONTENT

The Nintendo Switch OLED is Actually Worth That Extra R1,000
"The best display ever on a gaming handheld"

Of course, you know by now that the Nintendo Switch OLED console releases this week. You also probably know that the new handheld hybrid device didn’t get the much-rumoured 4K update we all expected. Thankfully, Nintendo has still managed to make this device quite relevant as it sits alongside the Switch Lite and regular Switch console. As someone who was on the fence about this minor hardware revision, I have to admit that it is quite an incredible little device. There’s just enough “new” on it to make it feel modern while also still delivering the iconic Switch experience you would expect from it.

I am still busy with a full review of this new Nintendo Switch OLED console. However, in the meantime, Nintendo has allowed me to share some hardware comparisons and an unboxing video. Watch it below.

The elephant in the room, of course, is the question of performance. No, the new Switch OLED does not perform any differently than the other two on the market but that is okay for now. Sure, Nintendo can’t hang onto this same old GPU for long before it needs a revamp but the selling point of this Switch OLED is the display and boy, is it gorgeous. 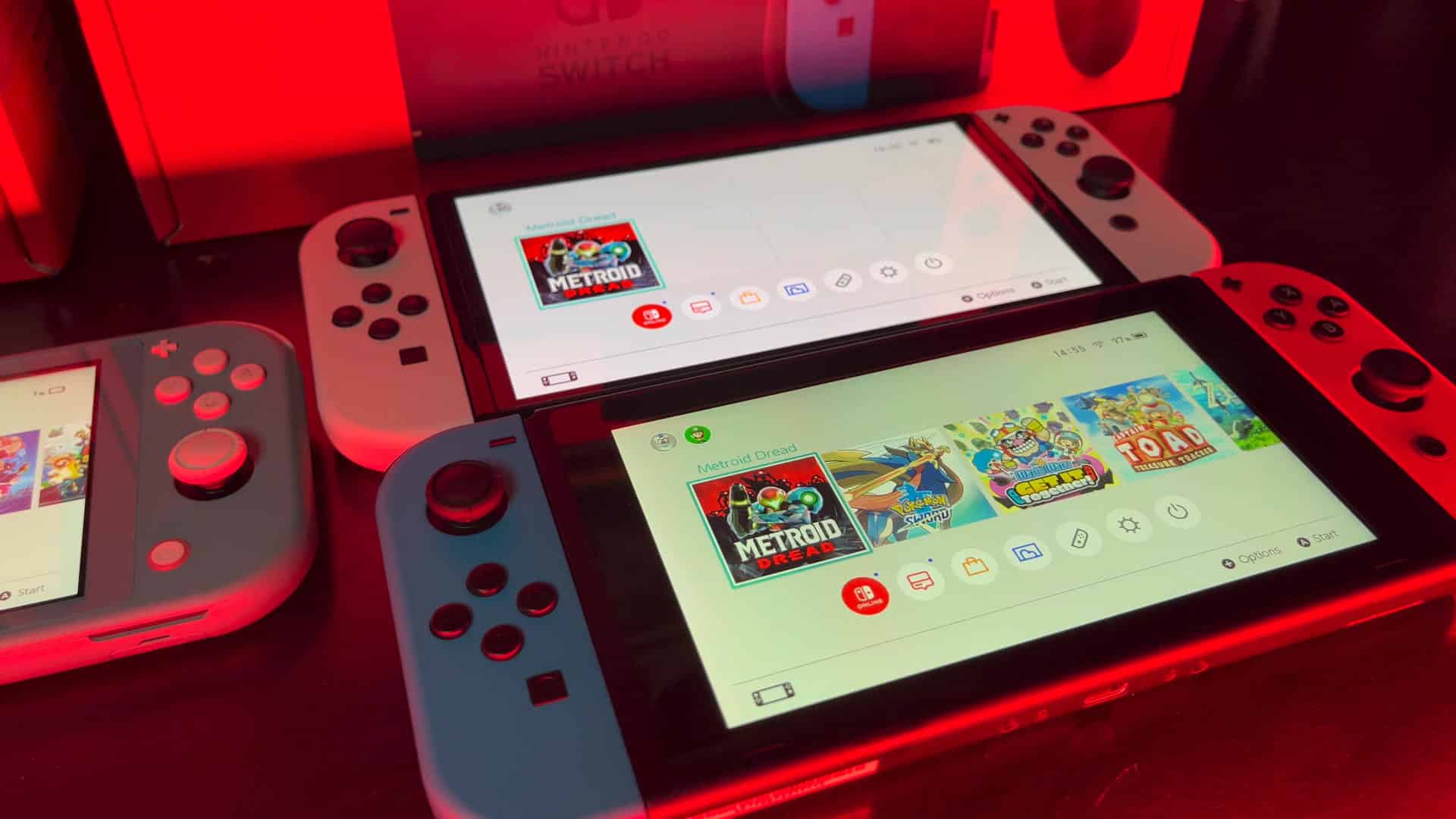 The last dedicated gaming device that got an OLED panel was the PS Vita back in 2012. Sony was ahead of the game back then even if the company went back to LCD for the second hardware revision. There are a lot of perks that come with OLED panels. They are brighter, more energy-efficient and can pump out a lot more colour accuracy than LED panels. This is exactly what the Switch OLED is capable of. The larger 7-inch display is super bright and so crisp even if it’s still rendering at 720p. 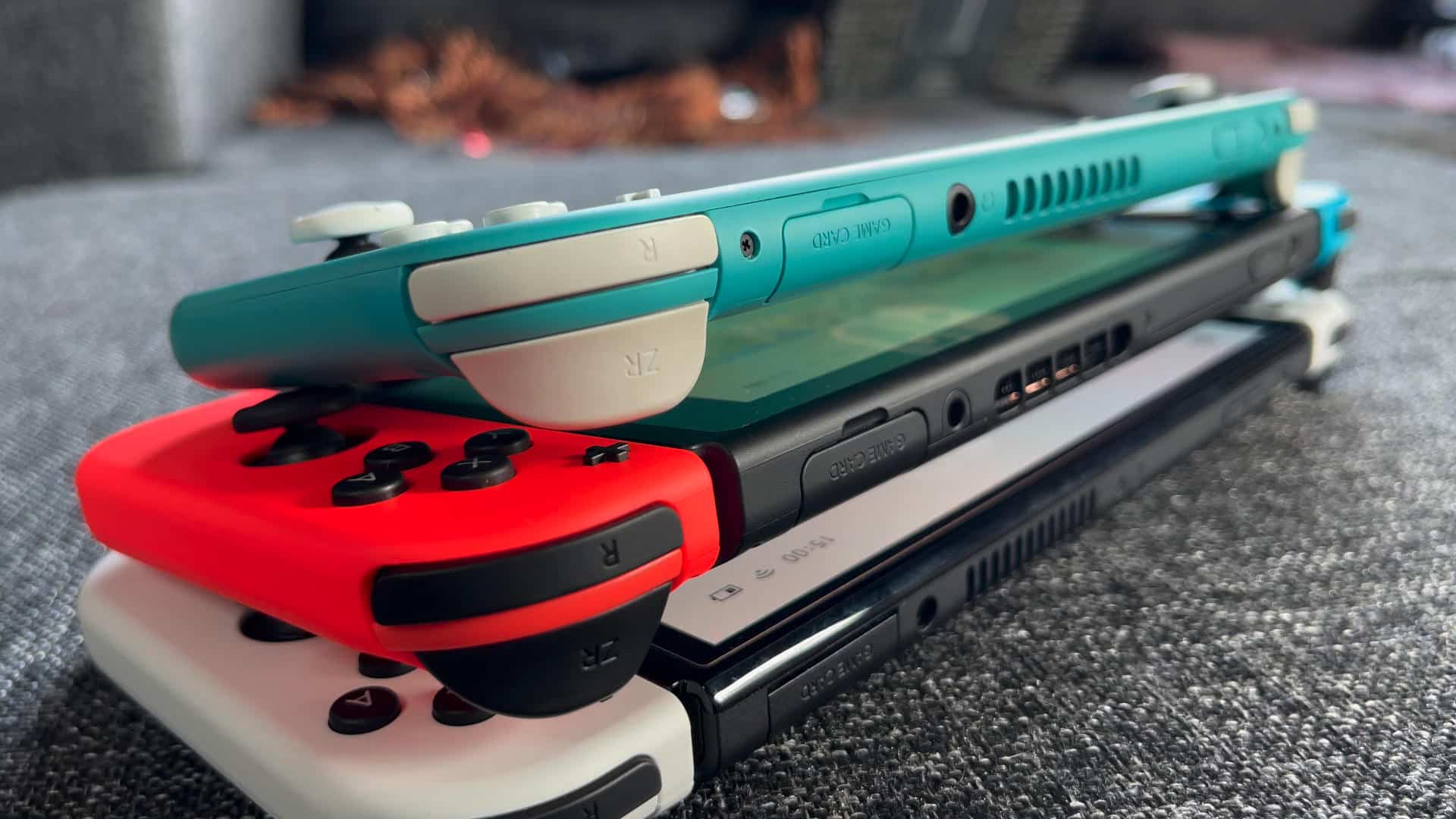 The screen might be bigger but Nintendo has reduced the bezels around the display instead of making the device larger. With that being said, the Switch OLED is slightly heavier and ever so slightly bigger. If only by a small amount. It weighs 420 grams compared to 398 grams and is 102mm x 242mm x 13.9mm compared to the 102mm x 239mm x 13.9mm on the standard Switch.

There are some nice smaller refined details that I could not help but love on the Switch OLED. For example, the buttons on the console itself have been slightly tweaked. The volume button is now longer and sleeker and the power button is an oval shape compared to a round button. The stand is so much better too. Honestly, I don’t know why we didn’t get this stand in the first place. The new wide kickstand covers the entire back of the device and is customizable to a range of degrees. This means the console isn’t limited to either standing or falling flat on its backside. I might actually use the Switch in stand mode now? 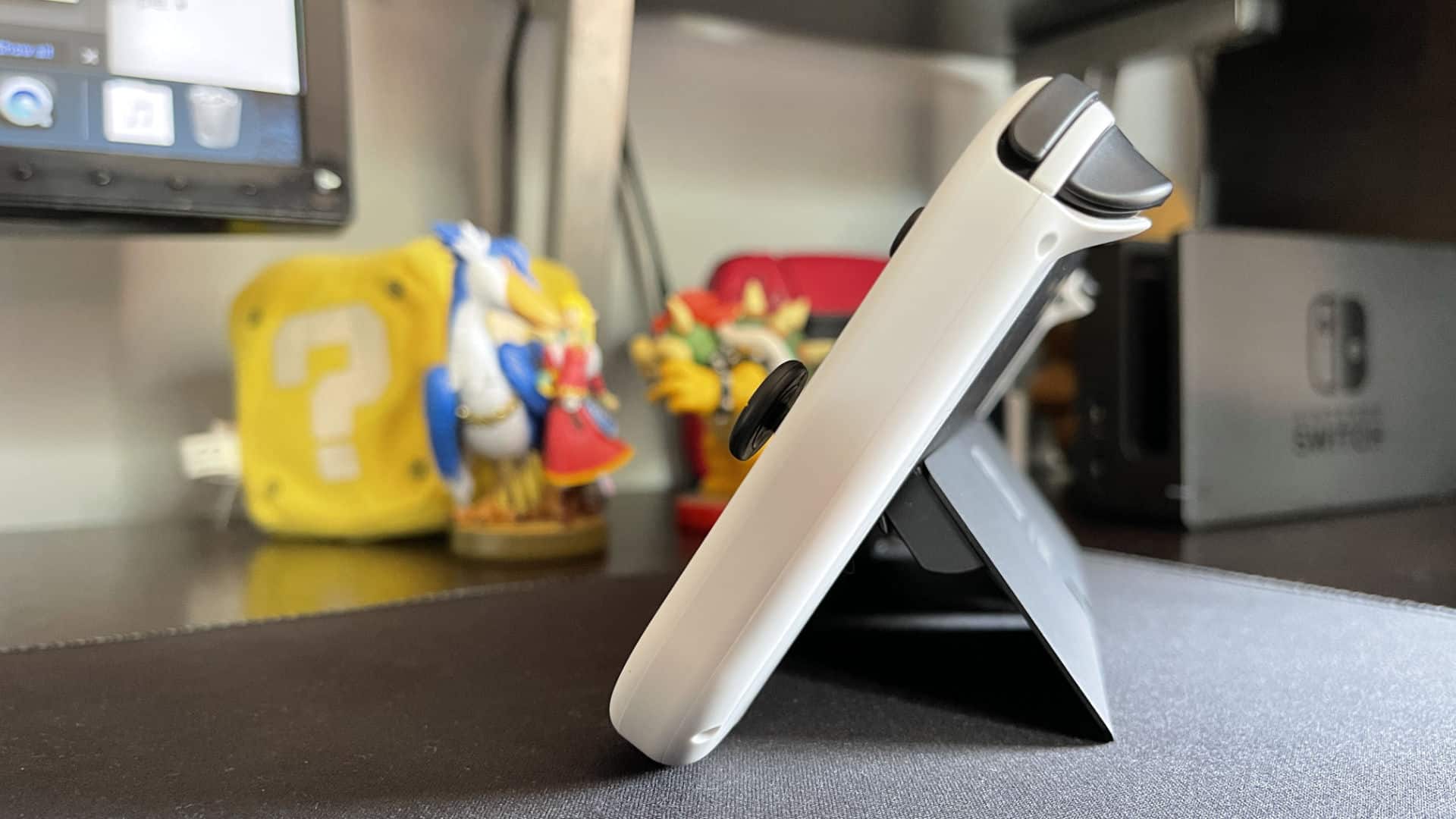 Inside there’s also a new 64GB storage solution. This is double that of the 32GB found on the Switch and Switch Lite. It is also a godsend for anyone who has a growing Switch library. The speakers on the new Switch OLED are also louder and pack a bit more of a kick. They aren’t amazing but have clearly been upgraded to produce louder sounds.

So the OLED display. It is good. Like real good. It adds so much to the experience that I never expected to find. In all honestly, my Switch lives in its dock only because I would rather play games on my TV, being a superior panel and all. However, I might actually take this OLED Switch to bed with me more often now. Not only is the display extremely bright but it does so much more for games than you would think. OLED lets the dark areas in games remain dark and can pump out more light during brighter scenes. Games just look so much better. When I say “games” I mean Metroid Dread, the only game I have tested yet. Samus’ suit glows in the dark areas and the ambient machine factories look incredible thanks to this panel. 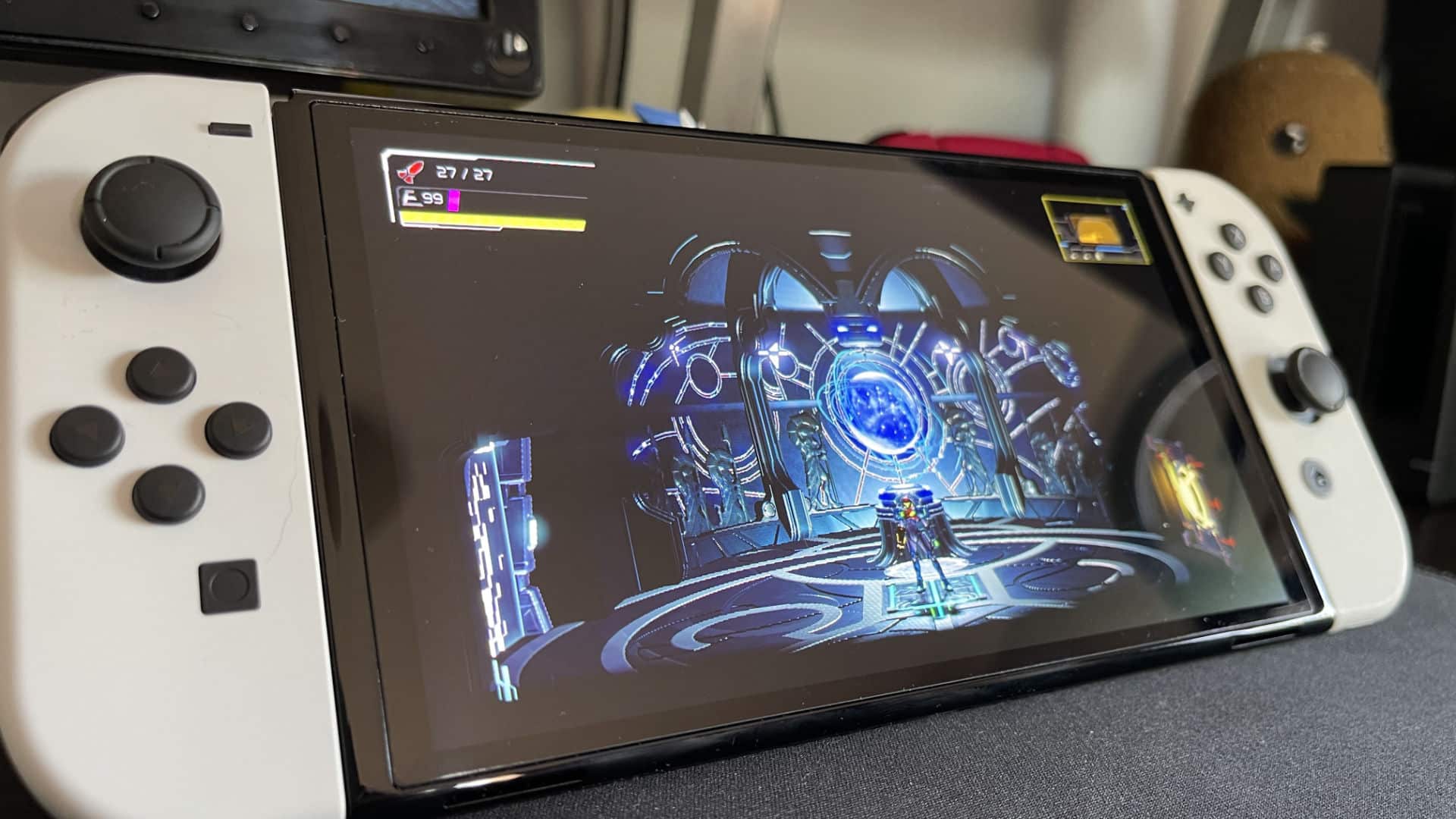 Nintendo also wants this OLED panel to be cared for. The company says that users shouldn’t keep the same bright image on the screen for long periods of time. You know, OLED has that tendency to cause burn-in if you do. The company hasn’t implemented any sort of pixel shifting to help prevent this issue. I hope they do. You can’t play around with OLED panels. They have a range of burn-in issues.

The company has also installed a screen protector on the Switch OLED that comes pre-installed out of the box. This is honestly fantastic. The Switch Dock does cause damage over time from sliding the console in and out of the plastic shell. This protector will help prevent that. It is also a pretty cool screen protector. I had no idea it was there until I saw the slight trim around the edges. 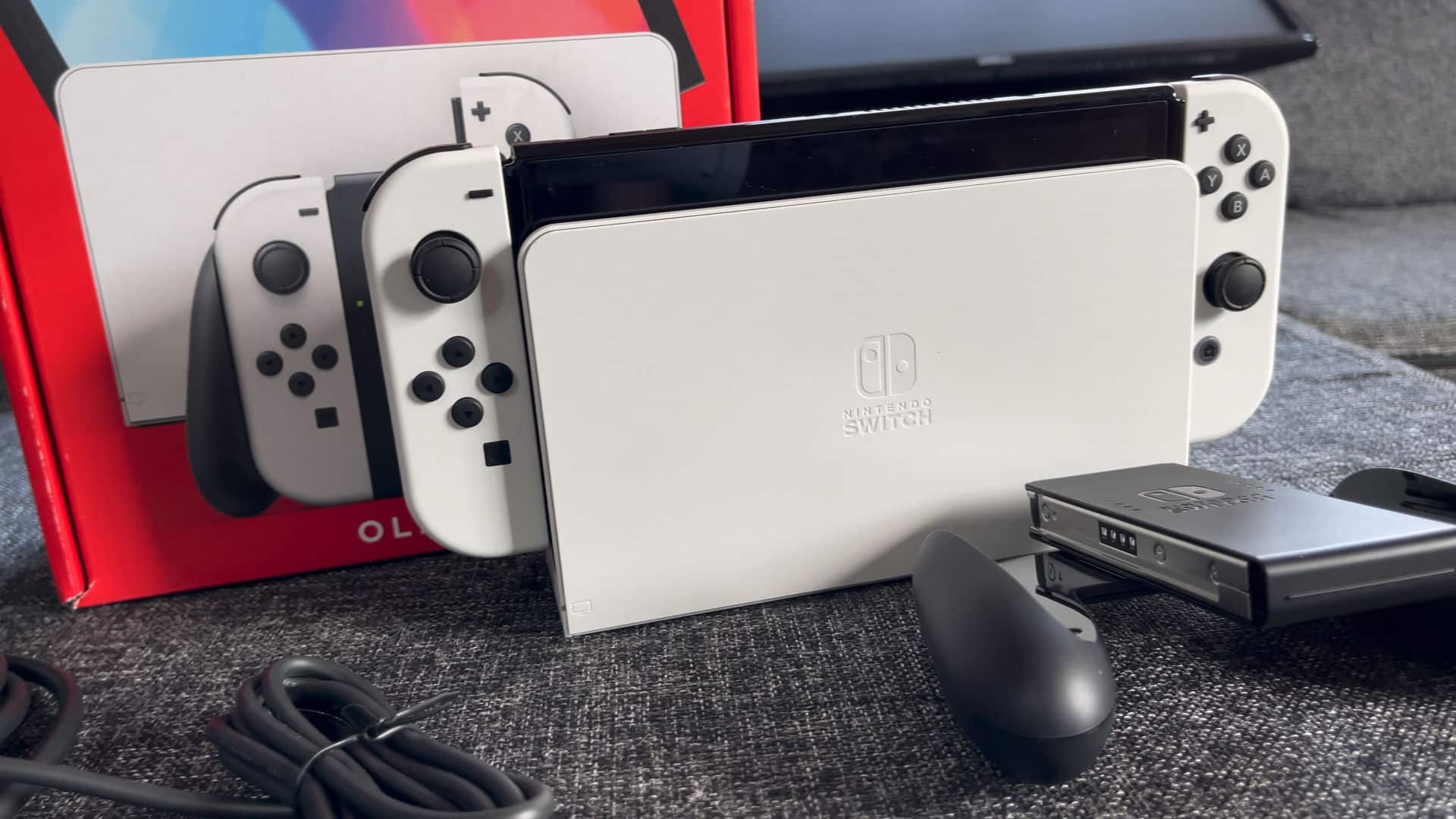 Speaking of the Switch OLED dock, it is much the same. The only real addition is the added LAN port. It might look drastically different from the outside but you can even use your old Switch on it too. There are some nice added finishes like the inner slot is now glossy. The back case is also removable instead of a swing door type. That is about it.

The new Switch OLED is all about the display but the finer details make this console feel new. There’s just the right amount of attention to detail to appreciate the slight price difference between the standard console. For R1000 you’re getting the brighter (incredible) display, revised dock and a handheld that feels like an R1000 more purchase. But I will share a full review on the console soon. In the meantime, don’t let the lack of 4K Switch stop you from enjoying one of the best displays on the market for handheld gaming. You won’t regret it.

PrevPreviousSly Cooper Franchise Revival in the Works – Report
NextValve Tears Open The Steam Deck So You Don’t Have ToNext
Gaming | Nintendo | The Nintendo Switch OLED is Actually Worth That Extra R1,000

Gaming | Nintendo | The Nintendo Switch OLED is Actually Worth That Extra R1,000