Privacy is a big deal nowadays. Not sure why everyone woke up so late and realized how important it is, but tech brands are finding all sorts of ways to keep private information and data safe and secure. Mostly everything we interact with that includes the capability of storing our information on it has some sort of security attached to it. Be it my iPhone that keeps my photos and emails safe and locked behind FaceID or my PS5 that requires a pin code in order to access my profile. Everyone values their privacy these days and it is important to feel confident that your information is safe and secure. This is where the Samsung T7 Touch SSD comes in – an encrypted range of super-fast storage solutions on the market.

The Samsung T7 Touch might seem like a tiny SSD on the outside but there’s a lot going on here than meets the eye. In fact, the Samsung T7 Touch boasts AES 256-Bit hardware encryption that ties into its password and fingerprint security measures. In short, that means you can lock this SSD down and no one can get into it without your finger or password. 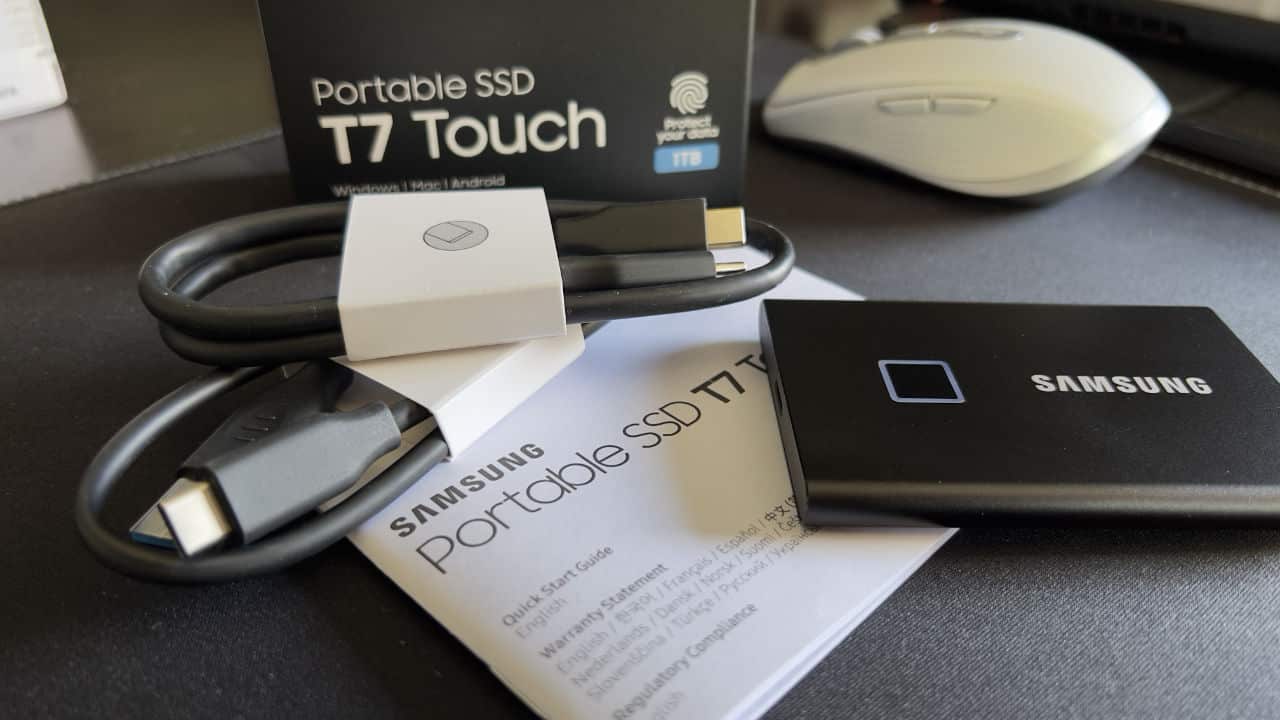 The SSD is small and lightweight. It is almost the same size as a credit card and only weighs 58 grams. At first, I couldn’t get over how small this SSD was. Considering this is a 1TB model with all the fancy encryption hardware, it is impressively designed. I guess size plays a big role in the use of this device. It is meant to go with you or get tucked away somewhere safe.

The device packs a USB C port on one end and a functional square on the top. There’s also the Samsung logo so you know who made this whenever you plug it in. The USB-C promises impressive speeds over USB 3.2 Gen 2 but I will get into that later on. The model I put through the test was a 1TB solution but it does come in a 2TB variant too. Samsung also makes a standard T7 SSD without the fingerprint sensor that is almost identical to this model. It comes in a range of bright colours too including Metallic Red, Titan Gray and Indigo Blue. The entire T7 Touch and T7 standard models are encased in a smooth and cool aluminium case. 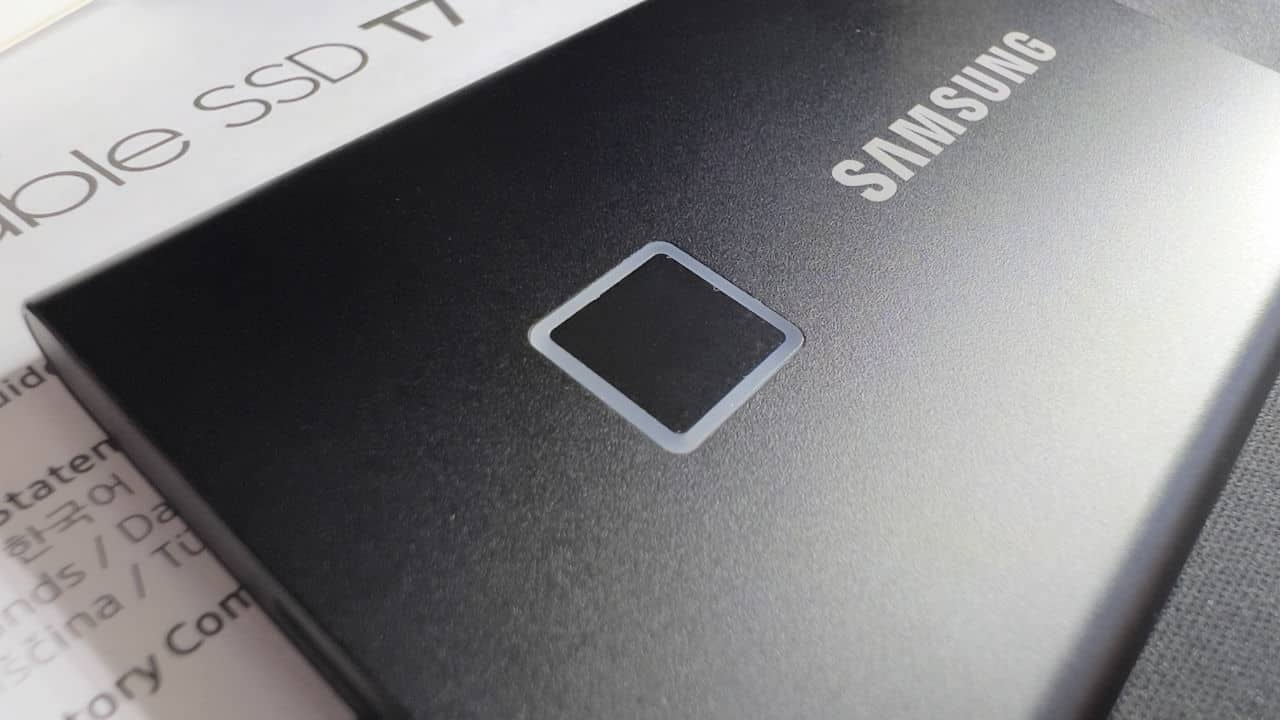 There’s no direct way to get into the Samsung T7 Touch without peeling off the back sticker and unscrewing the backplate. I really didn’t want to tear open this device but Samsung told me the internals are made up of a few components. There is an EPCM (encapsulated Phase Change Material) pad that helps keep the SSD cool and the SSD uses a proprietary custom onboard flash storage. In short, this is not some M.2 SSD chip slapped into a fancy case. Instead, the Samsung T7 Touch SSD uses TLC V-NAND flash as storage. You can’t open this drive up, take out the SSD and use it in your notebook.

Also, keep in mind that the Samsung T7 Touch SSD doesn’t have FIPS 140-2 certification. This means if someone does remove the sticker with heat as to not cause any visual damage to the drive, you won’t know. It is not a huge problem unless the drive is stolen. Then even with FIPS certification, you are pretty screwed. 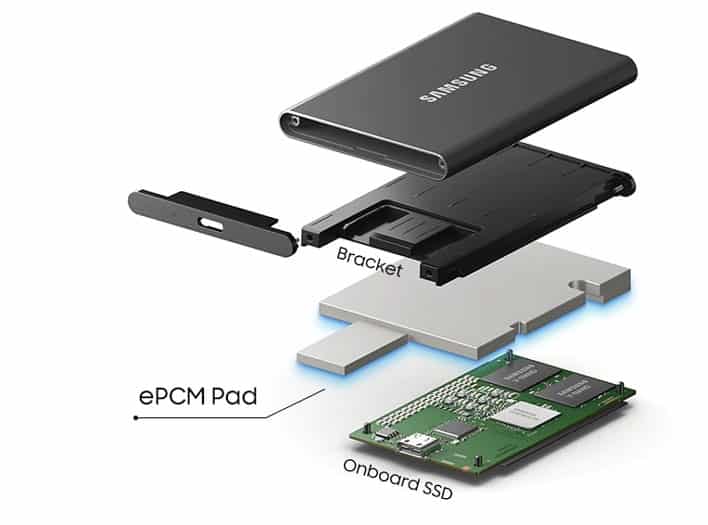 In the box, you’ll get the tiny SSD and two cables. There’s a USB-C to A cable and USB-C to USB-C cable. There’s also an instruction manual but there isn’t much to read on it anyway.

The Samsung T7 Touch supports Windows, Mac and Android devices. There’s no iOS support, unfortunately. By default, the drive works like a normal SSD storage solution. You plug it in and you can copy your files to and from the device. This is the same for both Windows and Mac. However, to enable the security features, you need to install the dedicated Samsung software that comes packed onto the device already. It is tiny at only 10MB so it won’t take up a lot of space. 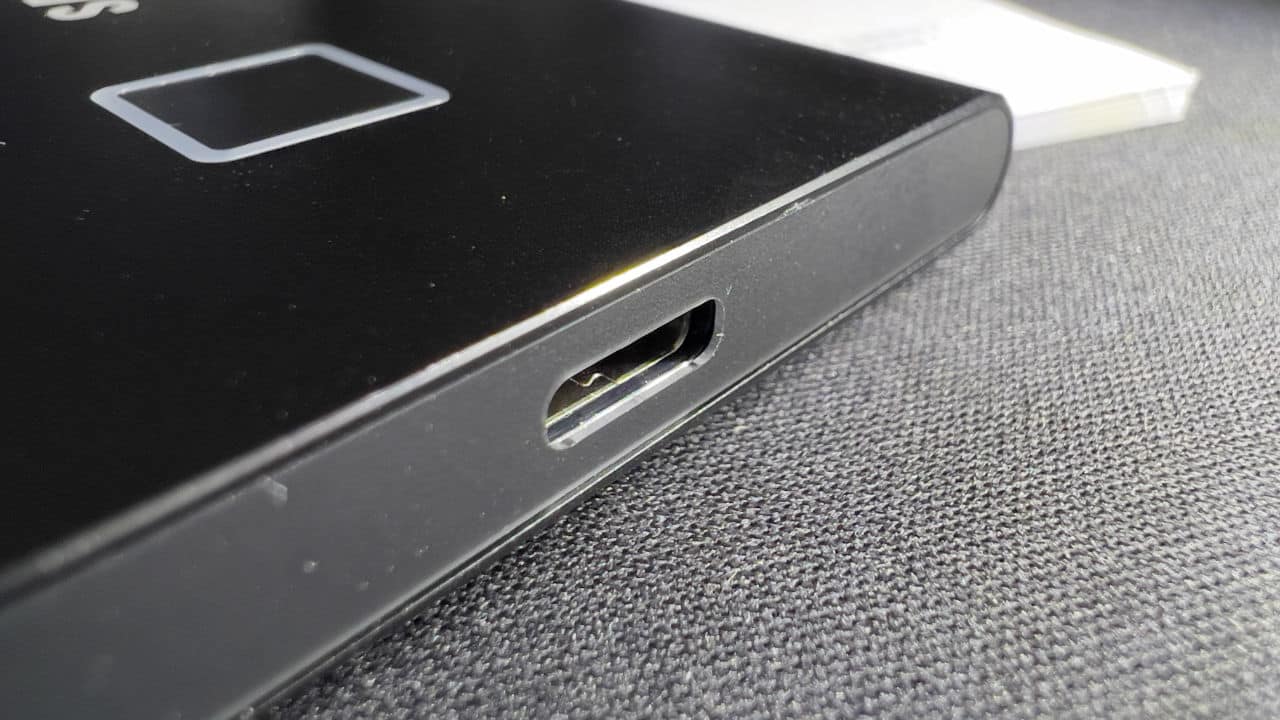 Once installed, Samsung gives you the option to register the security on the device in order to lock it down. You have to use a password before you can use fingerprints so once I chose a password, I was able to register multiple fingers. The process is simple and easy enough. However, I did have issues with the SSD failing to pick up on my M1 Mac. I had to go about enabling kernel access and enter boot up options. It was quite a story. I also noticed this is a common issue on M1 Macs so make sure you’re ready to spend some time unlocking your security on the device in order to get this SSD to read properly.

Once set up, I plugged in the SSD and it only showed me the installation files for the Samsung program. It was only after I launched the software and used my finger on the scanner did it enable the entire drive’s contents. I also asked my brother to come and use his finger while the device was locked and did nothing at all. Pretty cool if you ask me. 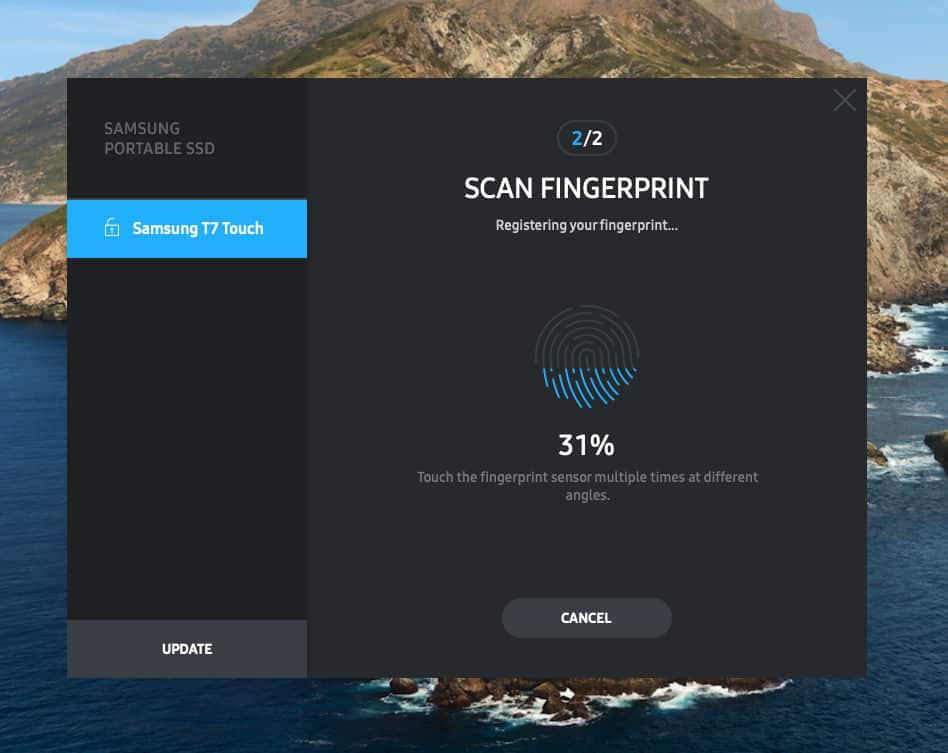 So what the Samsung T7 Touch actually does is mount the SSD onto your device but only in a specific form. This being the part where the programs are. This means you could always install the app on a device that doesn’t have it so you can access the private contents. Only once you enable the drive by the password or fingerprint scanner does it mount the data you have stored on the hard drive. I noticed how it disconnected and reconnected the drive after authenticating the fingerprint. I also noticed how the Samsung software doesn’t tell you if the fingerprint is wrong, it just doesn’t unlock.

When it comes to the speed of the Samsung T7 Touch, the SSD is fast. It promises up to 1000MB/s read and write speeds but I capped it at just over 600MB/s using a USB C to USB C connector on my Mac. It peaked at 611MB/s read and 656MB/s write. 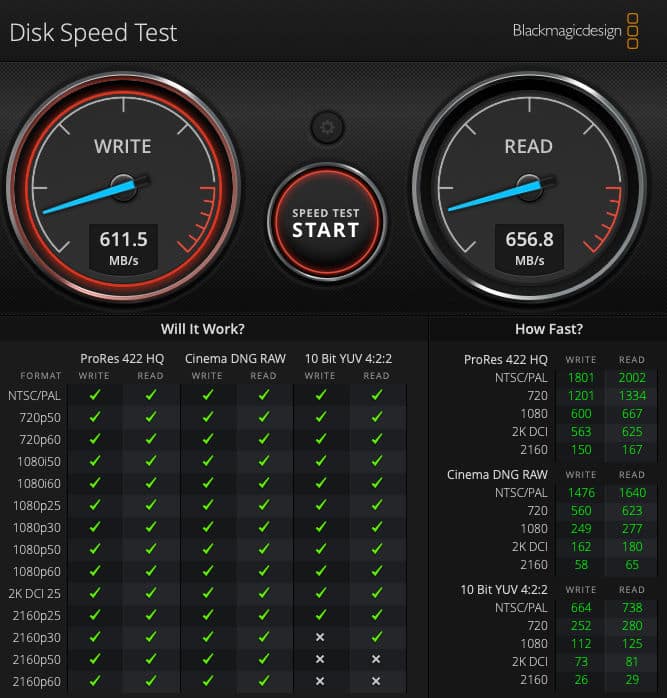 If you don’t have a USB-C port, then the USB A port does half the speeds. I reached 338MB/s read and 322MB/s write. Ideally, you would want to use this drive through USB-C for the best performance. 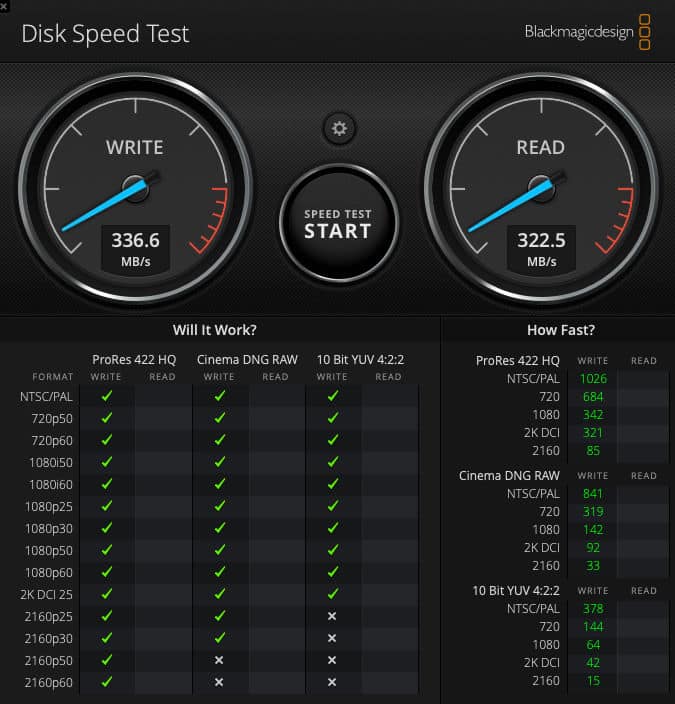 Speed and technical things aside, the Samsung T7 Touch is actually made for just about everyone. You can format it for your gaming console and store games on it. Use it for PC and work and even to save private videos on it. However, a big selling point of this drive is how you use it. I, for one, would keep it for that irreplaceable information and data. Bitcoin and other cryptocurrencies would be ideal here. The idea that you could store this currency in a safe and secure drive without the fear of it being stolen helps a lot.

I have heard horror stories of people who have their cryptocurrency stores on unreliable USB drives that either get stolen or break. This Samsung T7 Touch helps solve this problem thanks to its security features and reliable hardware design. It is also won’t break the bank. The 1TB model starts at R3,499 and the 2TB model costs R6,499. You can find out more about the Samsung T7 Touch on the official website here.