Right from the start, The Sinking City intrigued me as it is a very ambitious game, merging investigative gameplay we know so well from the Sherlock Holmes games with an open world and Lovecraftian horror, promising over 30 hours of action-adventure gameplay in the fictional city of Oakmont.

For those of you who don’t want to read through a whole review, you can check out our video review below, featuring gameplay without spoilers after the first 3 hours.

Excited by the prospects of a deep, massive game inspired by the works of H.P. Lovecraft and developed by Frogwares, I took the plunge as Charles Reed, a private investigator and war veteran seeking answers about the strange visions he is experiencing. The source, no doubt, is coming from Oakmont, a city that is quite literally sinking, struck by flood that does seem supernatural in nature. 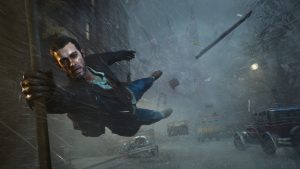 At first, I was pulled in by the investigative work, as the developer definitely nailed that aspect of the game. In the open world, you can choose to follow the main quest or take on dozens of side quests, helping solve mysteries and uncovering more knowledge of Oakmont and its strange populace. The inhabitants even have their own dialect that you need to learn and as an ousider, you aren’t exactly welcome.

Reed has a lot of investigative tools at his disposal, from your standard pick up and inspect items element, to a mind palace where you can piece together evidence and even supernatural abilities such as Minds Eye. The latter allows you to peer into the past, break illusions and follow tracks. 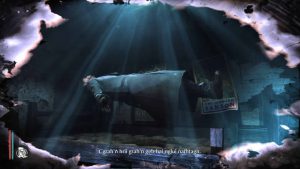 Then, you have retrocognition, our favourite gameplay system, allowing you to piece together what happened in the past. This helps you not only understand what is going on in a scene, but it just works brilliantly well as a puzzle mechanic with great voice acting and eerie effects. It was always a joy to figure out what happened at a crime scene and that never got old right through to the end of the game. 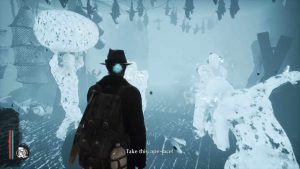 The main story holds a tonne of quests and I spent nearly 30 hours completing the horrifying tale, but since it is the best part about The Sinking City, I won’t spoil anything for you here apart from the opening hours. However, the side quests are less intriguing and feel more like a chore than anything else in the open world.

Another aspect that I did love about the game is that it doesn’t hold your hand. You are thrown into the city and you have to figure out where to go yourself, with map markers rarely appearing. 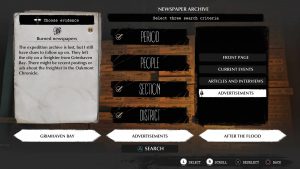 To get information on a subject, you have to visit the locals, for example, if I wanted to know more about a fire that broke out, we needed to go to the newspaper office, enter our criteria and search for answers. There’s a lot of reading to do and I even had to mark quest points on my map manually, but that’s part of the game not holding the player’s hand and I did appreciate the systems in place.

Getting around is also pretty simple, as you can head somewhere by foot, unlock fast travel points via phone booths, drive around in a boat in the areas that have already sunk into the ocean, or even take creepy, nervewracking stroll in the depths below. 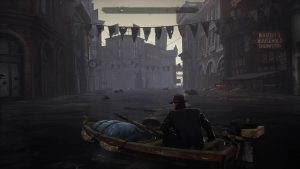 The game also has a survival aspect, which meant we had to scavenge for supplies and watch our sanity meter while doing investigations or fighting enemies.

However, the combat with the handful of guns as well as traps and grenades just feels very clunky. That’s a shame because you will be fighting a lot and to get the best supplies, you will need to enter infested areas, where enemies spawn as you try and loot as much as you can. 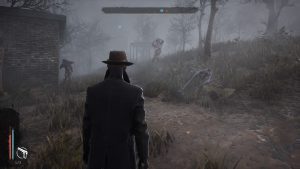 This open world design aspect breaks some of the horror, as I knew if I went into an infested area, a bunch of Wylebeasts would spawn for us to fight and since the combat is clunky, it wasn’t a fun experience at all.

Technical flaws drag The Sinking City into the depths of mediocrity

This brings me to the flaws that drag The Sinking City into the depths of mediocrity. First up, the frame rate is very unstable as I experienced massive FPS drops on the PS4 Pro to the point that it was hard to aim. These FPS drops also occur indoors in small rooms with no enemies around, which broke some immersion the game’s fantastic lighting system and environment detail do so well to create. 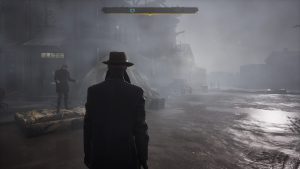 Then, we have the character animations. For the most part, animations for Reed and other main characters are good, but in the general population, the animations leave a lot to be desired. Characters look stiff and sometimes even just spaz out when you walk past, breaking a lot of the immersion as well.

However, the biggest technical issue is with the game’s save system. The Sinking City features both a manual and autosave options and I used both. Unfortunately, after saving manually and exiting the game, I lost more than 30 minutes of progress each time and the supplies we gathered from infested zones. 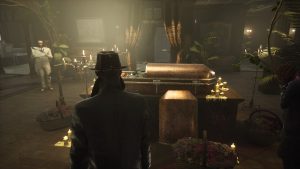 Lastly, we had to restart and create a new game after 10 hours in, as the main quest just bugged out and I couldn’t speak to the NPC we were supposed to. Hopefully, these issues will be patched very soon, as redoing 10 hours isn’t exactly fun. Keep in mind that having to redo so much of the story is a daunting task, especially since I knew exactly what was going to happen.

Even with the technical flaws, I pushed through as the main story was fantastic. It took me roughly 30 hours to complete doing a dozen side quests and clearing some infested zones along the way. Without spoiling anything, your decisions also matter, as there are multiple endings and even multiple outcomes in specific quests depending on what decisions you make. 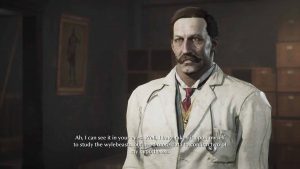 One example in the game’s opening is where I had to decide either turn in a suspect or let him go. I decided to let him go since his actions were caused by hysteria rather than being pre-meditated.

This resulted in the suspect leaving us a little thank you in the form of bullets in our hotel room. This type of choice and consequence system delivered throughout the game and it was one of the big reasons I kept playing even with the technical issues.

The Sinking City nearly drowns in its amazing atmosphere and the investigative work, especially when it comes to the main story, is fantastic. However, Frogware’s ambitious attempt at combining an investigation game with an open world simply doesn’t work as well as it could have. Sidequests are mostly uninteresting and with a big part of the game focused on collecting scarce resources from infested zones, the clunky combat doesn’t help.

All of this could have been forgiven. However, the biggest issues with The Sinking City is technical, from massive frame rate drops to poor animations and most importantly, the save game issues we mentioned earlier in this review. Hopefully, the developer fixes the technical issues after launch, but for now, I simply can’t give the game more than a 6.5 out of 10, even if I did love the story and exploring the city of Oakmont.

This review was based on a code sent to us by Bigben Interactive.