Right from the start, developer Deck13 makes something abundantly clear with The Surge 2, as there is more story in the game’s first hour than the entirety of the original. This is more than just a sequel, this is a showcase of developer growth. Set in a dystopian future in Jerico City, The Surge 2 throws you into the boots a survivor of a mysterious plane crash. As you wake up in a derelict detention facility, you meet a familiar face from the first game and set off on a journey filled with betrayals, dismemberment, death and interesting sci-fi elements.

I won’t spoil the story for you as every new area and boss I discovered along the way has a reason to be there and in The Surge 2, exploration and discovery in the game takes centre stage with the help of some fantastic environmental storytelling throughout all the areas of Jerico City.

If you want to see the game in action instead of reading through this review, then check out our video review below, continue on reading, or both!

At its core, The Surge 2 is still a Souls-like title and you can see the inspiration through its mechanics, penalties for dying and boss fights. This means the game is extremely challenging but still fair and no matter how many Souls-like games you have played in the past, you will die over and over again.

No matter how many Souls-like games you have played in the past, you will die over and over again

With every death comes knowledge and when I slowly began to understand the game’s finer mechanics, things got a bit easier, until I was throw a curveball yet again and ran into a boss that can only be described as a hardcore roadblock. It goes without saying that The Surge 2 doesn’t hold your hand, but it does give you some tips on how to survive the harsh environments and powerful enemies. Just like in any other game of its type, even the weakest enemies can kill you in a few hits and if you die, you could lose all your Scraps, which is the game’s currency. 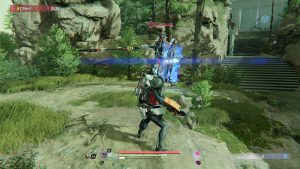 Unlike Souls games, there is a timer ticking down where you have roughly two minutes to get the Scraps back before they disappear. This adds another layer of intensity to an already-difficult experience, to the point that we sometimes just left the Scraps and went into another direction instead. This is partly due to me struggling to navigate through the city as it can get very confusing and the game’s map system makes it tough to see where you need to go next.

While Jerico City isn’t exactly open to exploring right from the start, with doors blocking your way, the city has a lot of verticality to it and different paths to unlock in order to progress, opening shortcuts to the all-important MedBays where you can level up your character, bank your scraps, craft items and more. 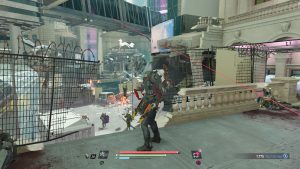 What makes The Surge 2 stand out, however, isn’t its improved story or world, but its combat and limb-targeting mechanic. Many of the enemies you will face are armoured to the teeth, with only one or two weak spots. You need to target those weak spots and if you damage them enough, you can cut off a limb for the kill, or even cut them in half.

This adds another layer of difficulty as targetting the correct limb in fast-paced, brutal combat is something to get used to but after about a dozen hours into the game, I was cutting off pieces over and over again with relative ease. 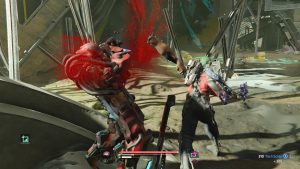 Dismembering an enemy isn’t just for show either, as you need to do it in order to get materials to upgrade your gear. For example, if you want a headpiece upgrade, you will need to cut off some heads. Everything in the game is upgradeable, including more than 80 weapons, injections, several drones and character mods.

The latter allows you to further customize your character for your playstyle. For example, if you are into parrying attacks, you will probably make good use of a mod that allows you to see from which direction an attack comes in.

Dismembering an enemy isn’t just for show either, as you need to do it in order to get materials to upgrade your gear.

The game’s combat shines in just about every aspect and you can see Deck13 learned a lot from the previous game. It is as brutally difficult as ever and when it comes to the boss fights, things escalate even further. Every boss fight sees you targetting specific parts, all while dodging deadly attacks. 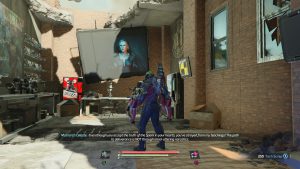 One example of the first real skill check boss, Little Johnny, have you targetting his mechanical tentacles and coolant tanks, all while dodging a range of attacks and even electrified spiders, barely surviving from moment to moment. These bosses have their own interesting personalities, with Little Johnny being somewhat of a spoiled brat and screaming in frustration as you beat him down. 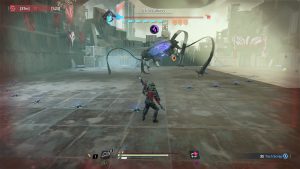 Then, there are bosses like Brother Eli, who during the fight talk about what you did and why he is fighting you. Each boss has multiple phases where I needed to adjust my tactics on the fly, for example, Brother Eli spawning adds to help him after he reaches half health. Characters you meet along the way can betray you as well, for example, we brought a part that a friendly shopkeeper needed in order to run her business. As a reward, she locked us in a meat grinder that we had to escape.

It is these types of interactions that really show how much of an improvement The Surge 2 is over the original, with great, memorable characters and a whole lot of world-building. One of my favourite characters is a self-aware vending machine that tasks you with collecting audio logs for rewards because the vending machine is a bit of a snoop and just loves gossip. 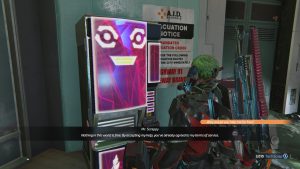 These audio logs help further establish the world and the story, giving me more insight into the characters, including bosses, that I faced (and died to over and over again) throughout the 40-hour experience.

The Surge 2 does have some issues, as I found it very hard to navigate Jerico City and the map system leaves something to be desired. Enemies bug out from time to time and healing injections do feel as if they have quite a big delay at times, making surviving even more difficult and at times, a bit unfair. It doesn’t help that you need to first convert battery power into an injection charge and then use it, with the same button, which makes things feel a bit clunky.

With that being said, the game is still well worth your time if you are a Soulsborne fan or just up for a very challenging experience. It is very clear that developer Deck13 improved on every aspect of the original with awesome boss fights, dismemberment and a much better story, world-building and characters for players to enjoy. There is no doubt that The Surge franchise has graduated from a Souls clone to standing on its own two feet and that is the best end result I could have hoped for. That’s why I’ve scored the game an 8.1 out of 10.

Are you looking forward to The Surge 2 and are you thinking of picking it up? Let us know in the comment section below.