Marvel announced their diverse and packed MCU phase 4 lineup over the weekend at Comic-Con San Deigo, including the next Thor film entitled Thor: Love and Thunder. With the reveal, we know that there will be a female Thor and I can just hear some people screaming “WHY?!” at the top of their lungs. However, there are some very good reasons for the MCU adding this “twist” in phase 4.

As you know, Thor Odinson wasn’t looking in the best shape (both physically and emotionally) during Avengers: Endgame and this is paving the way for Thor: Love and Thunder in more ways than one. For those who love to theorize about everything Marvel, we’ve got you covered as in this article, I will discuss what we know about the film so far, possible plotlines the film can take and female Thor, as per the comic book source material.

What we know for sure

Jane Foster (Portrayed by Natalie Portman) is making her return to the MCU after being left out of Thor: Ragnarok. She will star alongside Chris Hemsworth (Thor Odinson) and Tessa Thompson (Valkyrie). Thor: Love and Thunder will make its way to the big screen on 5 November 2021 as the last film for the MCU phase 4 revealed so far, importantly after the events of Dr Strange in the Multiverse of Madness.

The film will be directed by non-other than Taika Waititi who also did Thor: Ragnarok. Lastly, we know that Jane Foster will wield Thor’s hammer in the film. At first glance, that isn’t too much to go on, but digging deeper, that’s actually quite a lot, especially when considering the film’s placement in the MCU phase 4 plans. 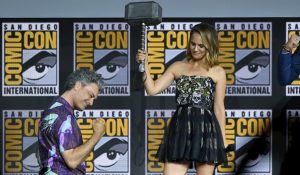 The female Thor, also known as Jane Foster and Mighty Thor, wasn’t just pulled out of a hat at a Marvel Studios and Disney brunch. The origins of the female Thor run deep in the Marvel comic books, first starting with the character Jane Foster, created by Stan Lee and Larry Lieber in Journey into Mystery #84 all the way back in 1962.

Jane Foster first wielded Thor’s hammer, Mjölnir, all the way back in 1978 in the “What If” comic book series (#10), which was non-cannon. Then, female Thor made her electric appearance in Marvel cannon in 2014 in the Original Sin comic book series created by Jason Aaron and Mike Deodato. This series had multiple comic book crossovers. That’s when female Thor, aka Mighty Thor, first appeared and was revealed to be non-other than Jane Foster in issue no. 8. Now with the history lession out of the way, let’s discuss which plot points Thor: Love and Thunder could take. Later on, she even becomes a Valkyrie, but more on that further down in this article.

Judging by the source material, I can put together somewhat of a theory for a possible Thor: Love and Thunder plotline, considering the events of Original Sin. In the MCU so far, things have been slowly leading up to a point where Thor Odinson becomes unworthy of weilding Mjölnir.

Every time she turns into Mighty Thor, her condition deteriorates as becoming the god of thunder cleanses all toxins from her system, including those in the chemotherapy

This could very well happen just as it did in the comic books, where Nick Fury whispers a secret to Thor which causes him to become unworthy. Then, an unidentified female picks up the hammer (on the moon of all places) and becomes the new Thor, leaving Odinson to relinquish the name. This all happens during events which leave Uatu the Watcher dead on his moon base. Odinson then tries to figure out who this new female Thor called Mighty Thor is and later, it gets revealed that it is non-other than Jane Foster.

Here’s the twist: Jane Foster is suffering from breast cancer and does undergo chemo, but refuses any magical treatment that Asgardians might be able to provide. Every time she turns into Mighty Thor, her condition deteriorates as becoming the god of thunder cleanses all toxins from her system, including those from the chemotherapy. She fights a war on two fronts while facing possible threats with my best guess being Mangog, which is the embodiment of the hatred of a billion beings of an alien race. 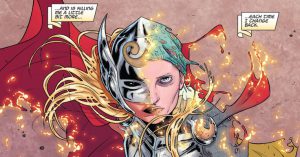 Early in this article I also mentioned that we know for sure that Tessa Thompson will reprise her role of Valkyrie in Thor: Love and Thunder. Interestingly, in the comics, Jane Foster later becomes a Valkyrie when the “War of the Realms” comes to Earth and Malekith is defeated, so her being the female Thor and Valkyrie also featuring in the upcoming film together, could mean that this will set up future events, including that Jane Foster later becomes the first in a new generation of Valkyries, armed with Undrajarn the All-Weapon from the comic books.

Keep in mind that this is theory-crafting and the official plot for Thor: Love and Thunder has yet to be revealed. Things might sound a little bit crazy, but since the film is set to release after Dr Strange in the Multiverse of Madness, which will likely open the door to some very crazy things, where literally anything can happen, including multiple versions of the same characters and just about anything else you can dream of.

RELATED: Next Marvel Avengers Team Will Be “Very Different” and Phase 5 Confirmed

What direction do you think Thor: Love and Thunder will take and do you think the MCU will follow the source material in some or all aspects? Let us know what you think and share your theories about the fourth Thor film as well as the female Thor in the comment section below.