Tony Hawk’s Pro Skater 1 + 2 is both satisfying and frustrating at its best moments. Trying to hit a 10,000 combo challenge with 4 seconds left on the clock only to not gain enough height and stumble and fall. It took what felt like forever to master some tricks, perfect a grind, collect the secret tape and purchase a new board. However, the more I tried the better I got at it – this skateboarding business.

As a nineties child, I owned a skateboard and played the original game. I dreamed that one day I would ramp off a building, spin around a few times, defy gravity and land in style. That never happened but I always had Tony Hawk’s Pro Skater to fall back on. There was a certain magic to the series. Vibing music, stylish skateboards to unlock, and the roster of skaters included a bunch of people I had idea existed. However, there was always Tony Hawk and no matter who you asked, everyone knew him.

Check out the Tony Hawks Pro Skater 1 + 2 Collector’s Edition. It comes with a Deluxe Edition + a board featuring an exclusive reissue of the iconic Falcon 2 design.

There’s a lot to do Here

Anyone who ever played the original game will feel right at home playing through the main game’s core content. However, there’s a lot more to chew on this time that adds new ways to approach each stage. In order to advance to a new level, I had to complete some challenges. Unlike the original game which included five objectives, the remake includes a lot more. These range from the usual “score XYZ amount of points” to the classic “collect the SKATE letters”. In addition, there are new ones such as picking up themed items to that specific stage. The school, for example, has textbooks. I had to bash through boxes during some levels too.

The real fun comes from the crazy objectives which include grinding over certain objects, wall riding over a specific item and even doing a specific trick while jumping over a gap. It felt great going into a new stage and ticking off each objective as I discovered the level’s hidden areas. Not to mention the sense of discovery that came from figuring out what trick and jump had to be performed over which area.

Keep in mind that there’s a time limit to this all. Just like the original, you only have two minutes in each stage to get stuff done. Thankfully, these objectives are complete at your own choice. If I wanted to reach the high score, I made sure to focus that run on just tricks. When I was collecting items, I did nothing else but skate around looking for them and avoided wasting time on tricks. Later levels get a bit tougher and relied on the score bar being full in order to speed up my skater so I could get around quicker. 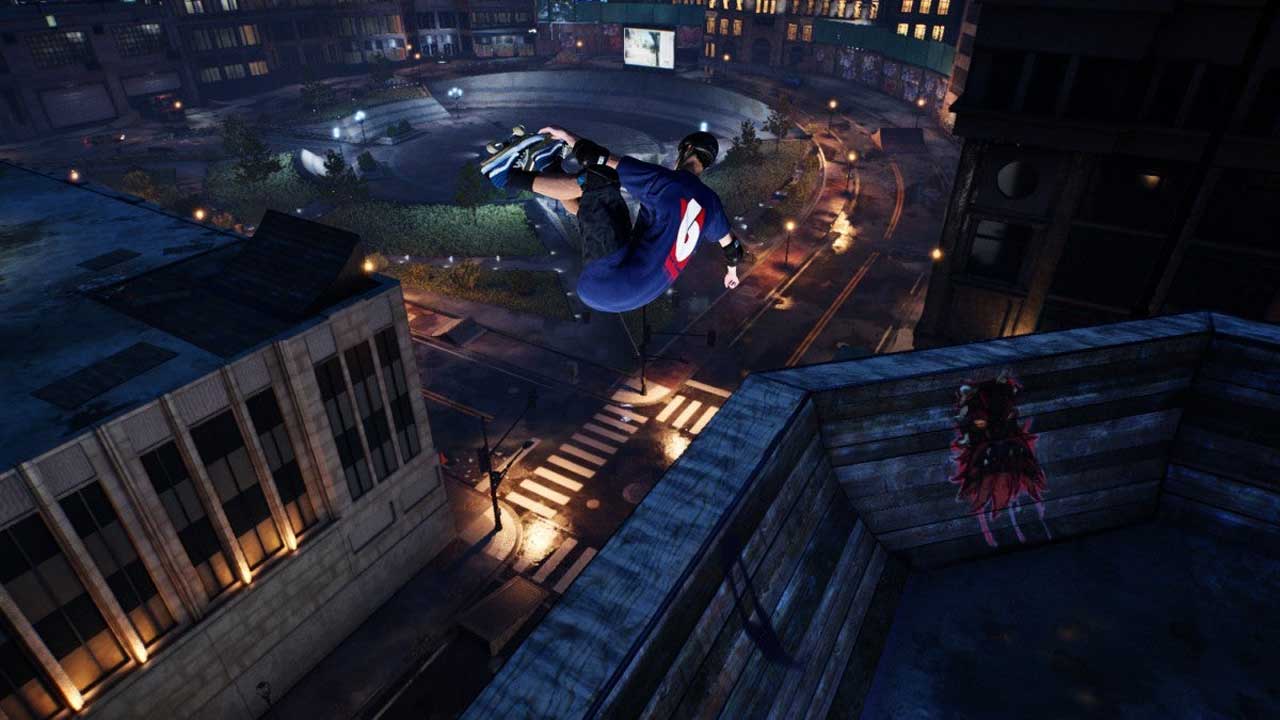 The game eased me into this all pretty well and by the time I reached the later levels in Tony Hawk’s Pro Skater 2, I understood the flow of the gameplay. I was no better at landing a special trick but I was better at an Ollie and ramping up walls to reach an item. That is what makes the progression system so great. I did not have to be a master at the score in order to unlock a new level. I tried my hardest, got the first tier and then collected items to get the list completed. You see, in order to progress, the next stage has a point requirement that collects all the completed objective of that mode together.

We then have the skating which is was often a hit or miss for me. As I mentioned before, you can either have a great run or be a hot mess and fumble. I can’t say I was a professional at this game because I was not. I rarely hit the highest score target but I guess I just need more time to practice. 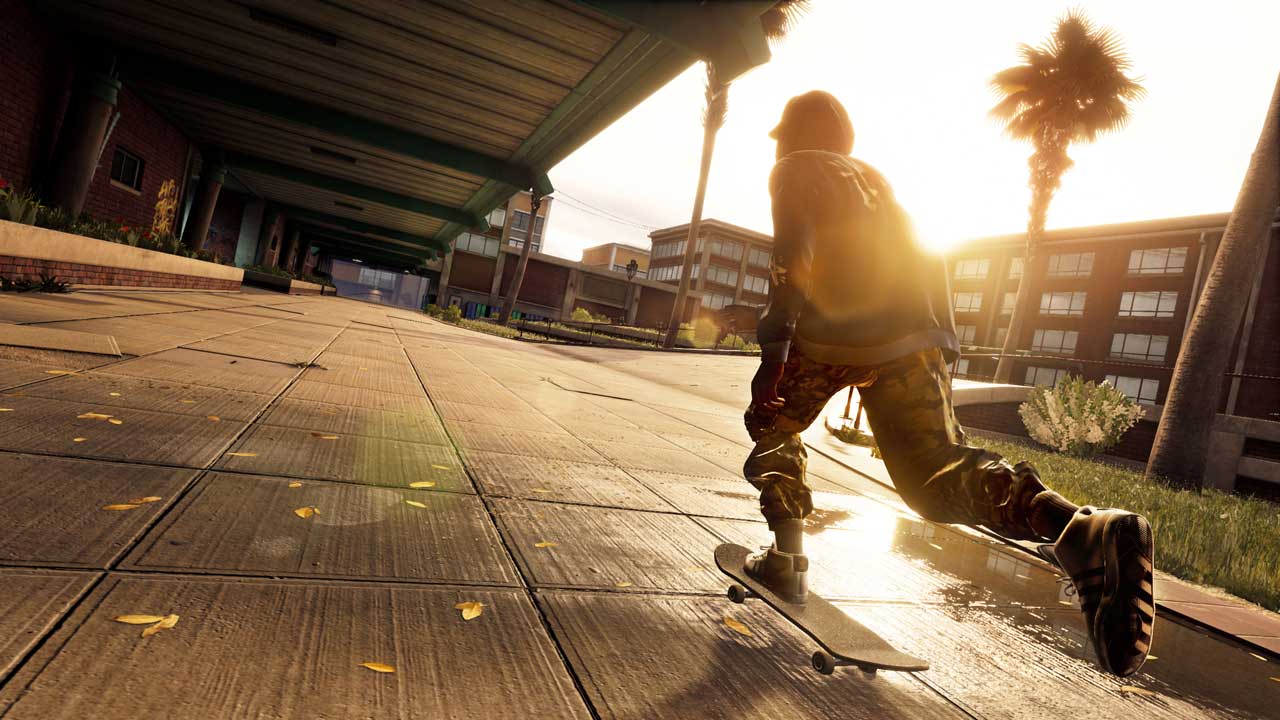 The game includes a range of skaters to choose from each with their own unique stats. These are upgradable using points collected in each stage but you need to play that stage with each skater to grab those points. The version I got to review included a cool skeleton skater but the game had to be online in order to choose him. Each skater felt different to a certain degree thanks to their Special Tricks. These are iconic moves I could perform once I filled up the score bar. This is done by performing tricks and not falling on you head.

Performing tricks is all about looking at your environment and saying “I will do that there”. Skating towards a wall meant I had a few tricks I could perform and seen as the wall had a railing next to it, I could then combo it with a grind and end it with a grab. I performed a manual, let it go, ramped up a slide, turned around, performed a grab and positioned myself near the railing so I could land on it and grind to the end of my combo. 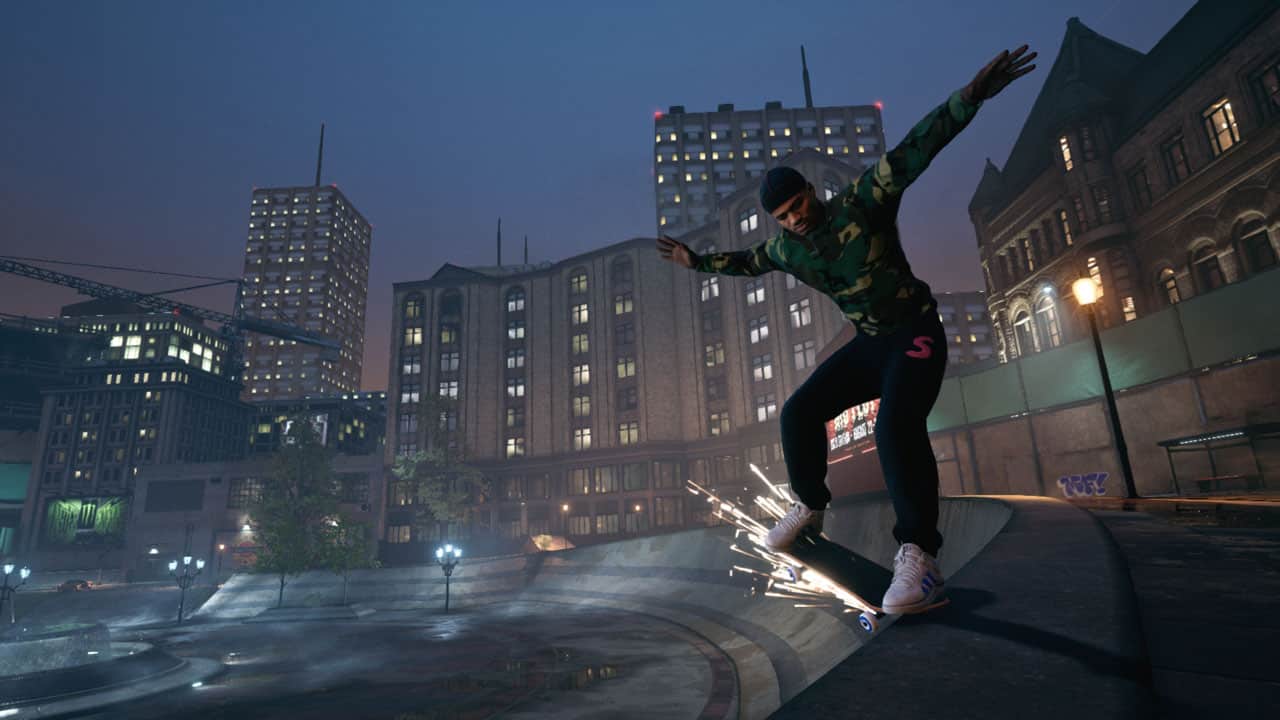 When my planned worked it was great but of course, often I bailed. However, controls felt great throughout the game and when I failed it was because I was being a noob and tried to pile a load of impossible tricks into a jump that was clearly not long enough to get them into. You can’t just jump and spam a few buttons while moving the analogue stick. That won’t fly here. In addition, you can’t just keep grinding rail after rail as the points are reduced for repetitive tricks. The game forces you to be creative and that comes with risk and reward.

You Get Better the More You Bail

Tony Hawk’s Pro Skater 1 + 2 is so good because it kept pushing me to a new limit. I kept failing and trying again and again. There’s also a load of challenges including daily ones that tasked me to perform a chain combo of moves. I could not sit there and not attempt this. It took me five minutes of trying but I finally landed a Manual, Flip, Grind and Grab in one combo and felt great afterwards. It also helps that the controls feel responsive. You can use the D-pad and the analogue stick to move about and initiate moves and most of the time it worked. Don’t get me wrong, there’s a steep learning curve here to master. 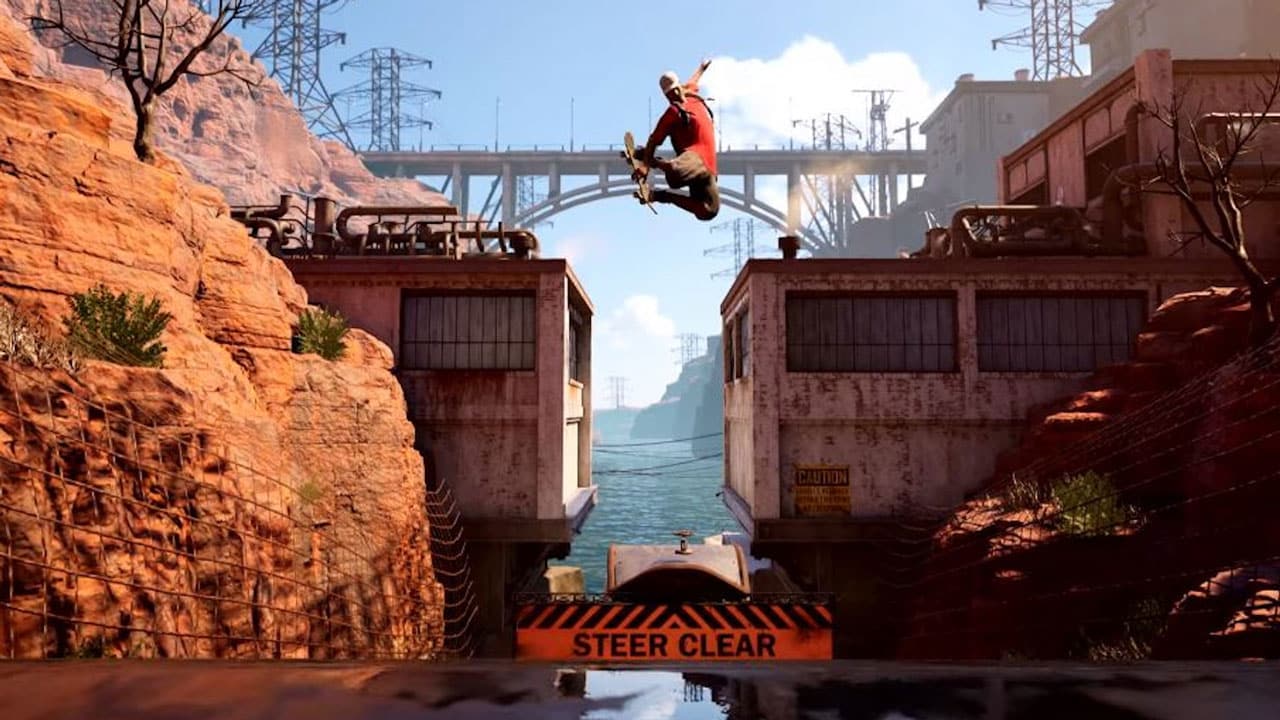 Apart from the campaign, Tony Hawk’s Pro Skater 1 + 2 includes the return of the great Free Skate, multiplayer and yes, it is split-screen and online. First, there is free skate which is a great place to just mess around in. You can even play stages you have not unlocked which is great if you want to get a feel of them first. As for the multiplayer, the classic modes return including my favourite “HORSE”. This is a constant fight between two players who perform tricks in an attempt to outperform the other player. I scored more points than my brother and he got the “H”. Whoever gets fewer points continues to get a new letter of the word HORSE. Whoever spells it out first loses. It is the ultimate mode of humiliation.

Challenges for every skater

Throughout the game, you are constantly levelling up a profile, raking up XP and earning cash money. This is how the game progresses. I could spend my money buying a fancy new board with a moving art underneath it or a shirt for Leticia Bufoni. It makes investing in each skater worthwhile. They all have their own unique boards and tricks which you can perform. I don’t know any of them other than Shane O’neal and Tony Hawk but hey, variety is the spice of life. 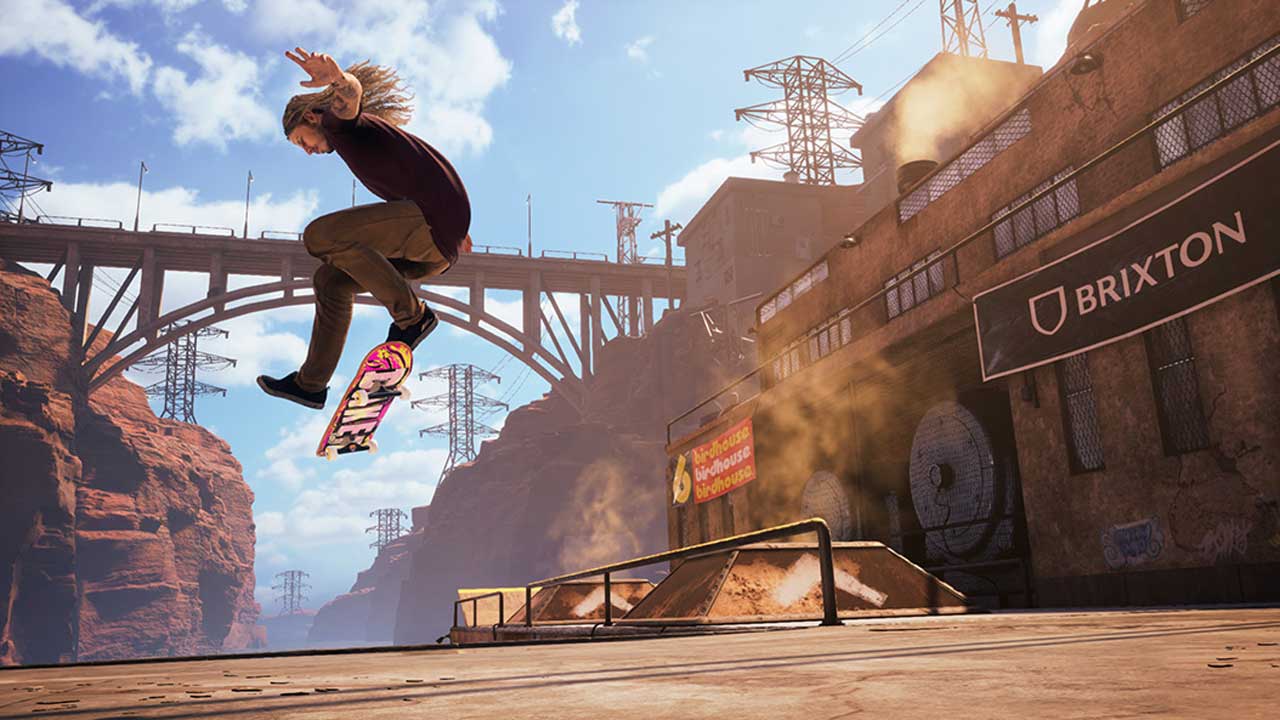 I do have a bit of concern for the game’s currency system. Earning cash is super slow and mainly earned by completing challenges. Store content is expensive meaning there’s a heavy grind ahead to for those who want to stand out. However, the better you are the more money you earn so maybe I was just bad. There’s also a custom skater option where you can make your own character and represent your country. This is a great way to stand out when entering the online lobbies, something I did not test during this review process.

Lastly, there’s the creation mode which lets players build a park. I jumped into a few of these. One was an insane rollercoaster that I had to grind on while going up a set of long rails into the sky. It was an exhilarating feeling racking up a 153 times combo and ending the ride with 450K points. The crazy level also let me complete some challenges at the same time. This mode will no doubt bring out the best of the community and not to mention the endless creations gamers will make and share online. 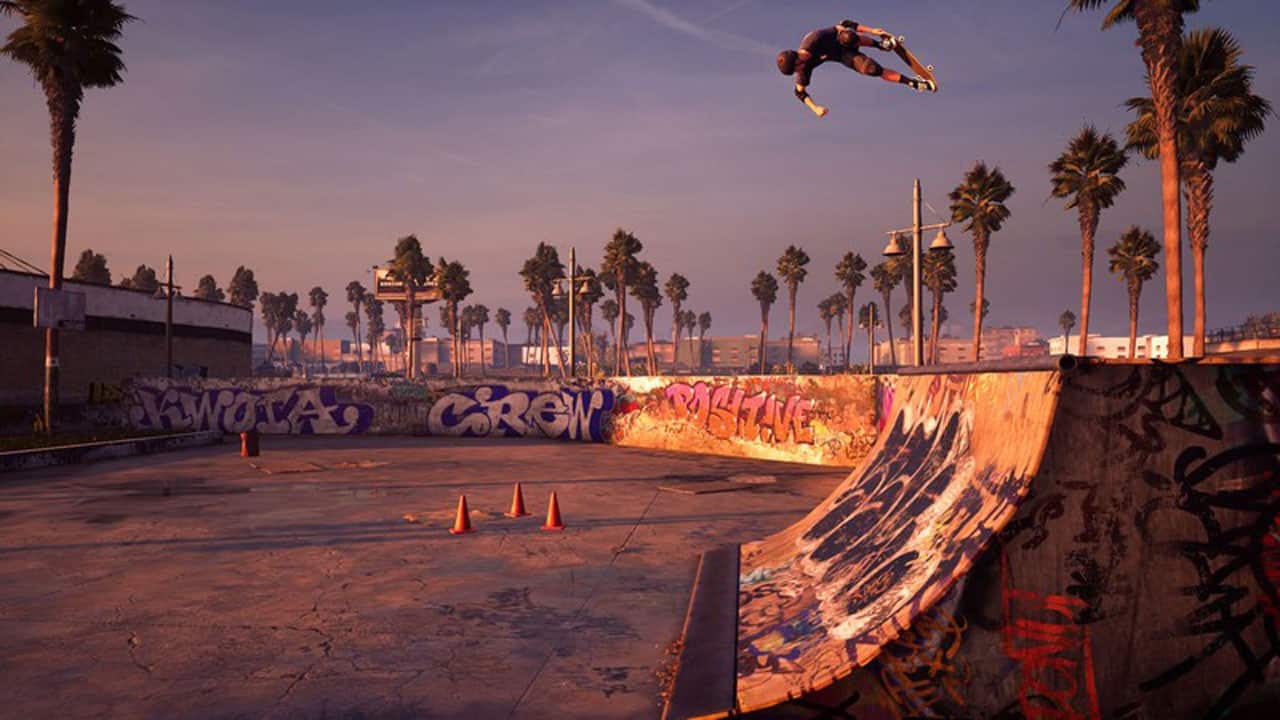 As for creating a park, it is simple enough. Placing objects is as easy as selecting one in the menu, moving it around and placing it down. Things get a little more complicated with other items but practice makes perfect. It is a time consumer when it comes to fleshing out a park. However, the more effort you put in, the better the result.

Tony Hawk’s Pro Skater 1 + 2 is a huge game filled with a bunch of content that should add months of game time. There is a steep learning curve to master but the accessibility options may make things easier for you. The profile mechanics and skater level systems also add padding to the game. Every skater has hundreds of challenges to master. Not to mention the create a park mode which is going to blow up with user creations. There’s so much to enjoy here.

This Tony Hawk’s Pro Skater 1 + 2 review was based on a code sent to us by Activision.