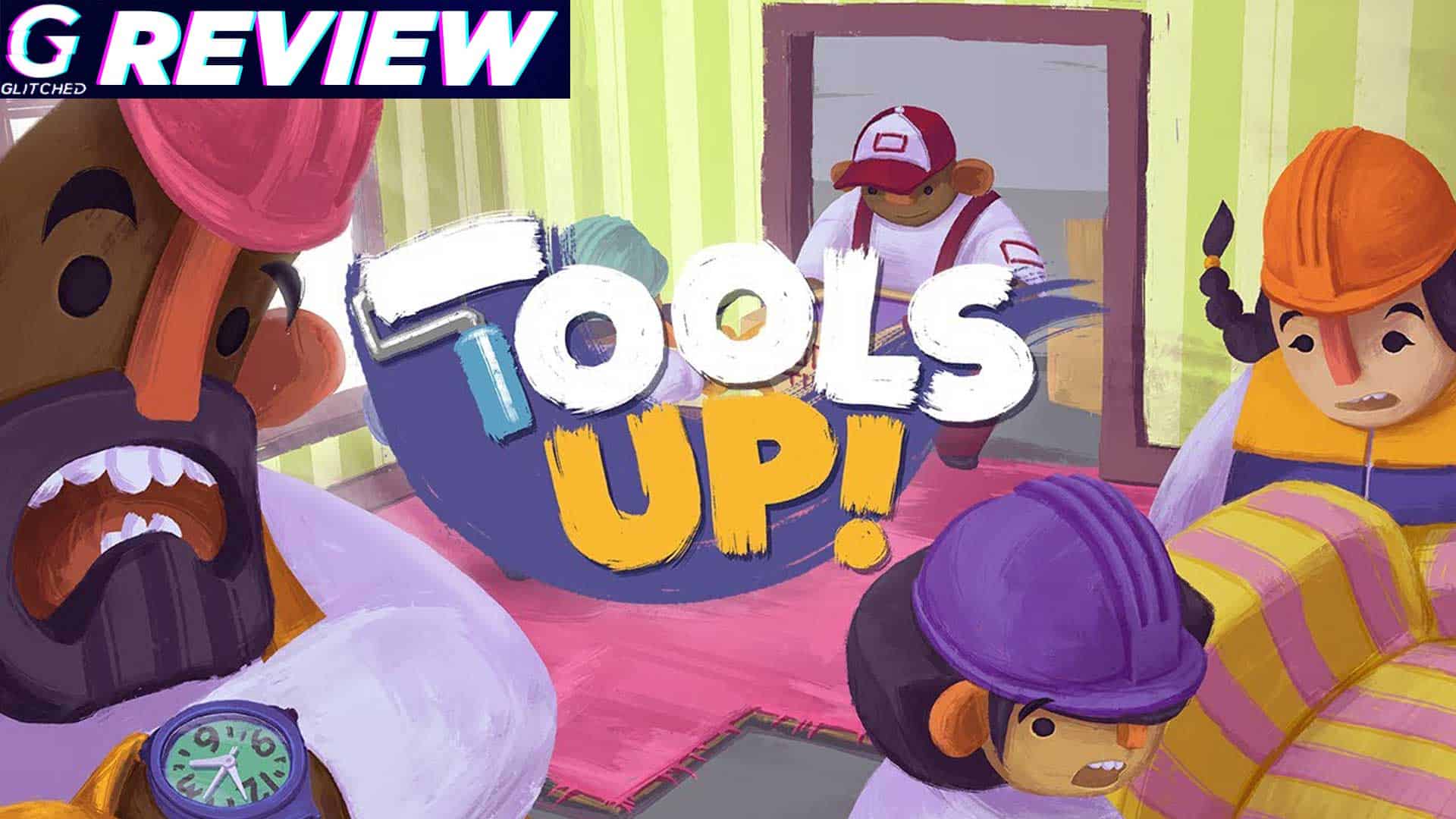 Tools Up was no doubt inspired by the popular and chaotic co-op game Overcooked and while it may not be as good, it satisfied my couch co-op itch. I spent a good few hours playing this team-building game during December, completed it and took it to a friend’s house to do it all over again.

Check out our 404: Gamers Not Found stream where the team played Tools Up

Tools Up follows a group of renovators who get sent to various locations to rip, tear and pull off wallpaper and carpets before the timer runs out. While it sounds simple, it is far from it. The limited tutorial meant I had to figure out much of the game’s mechanics alone like having to completely clean out a house before the level would complete but it was all good fun.

The aim of the 30-or-so levels is to get three stars. The faster you head in and fix up the building, the higher the chance of this happening. Each level plays out the same. You head into the building, pick up the blueprint see what work needs to be done and get it done. Often obstacles would get in the way of doing your work like the carpet not yet being delivered by the courier. However, there’s always something to do while you wait for this to take place like pulling up the floor, tossing rubble in a bucket and emptying it outside in the dustbin. 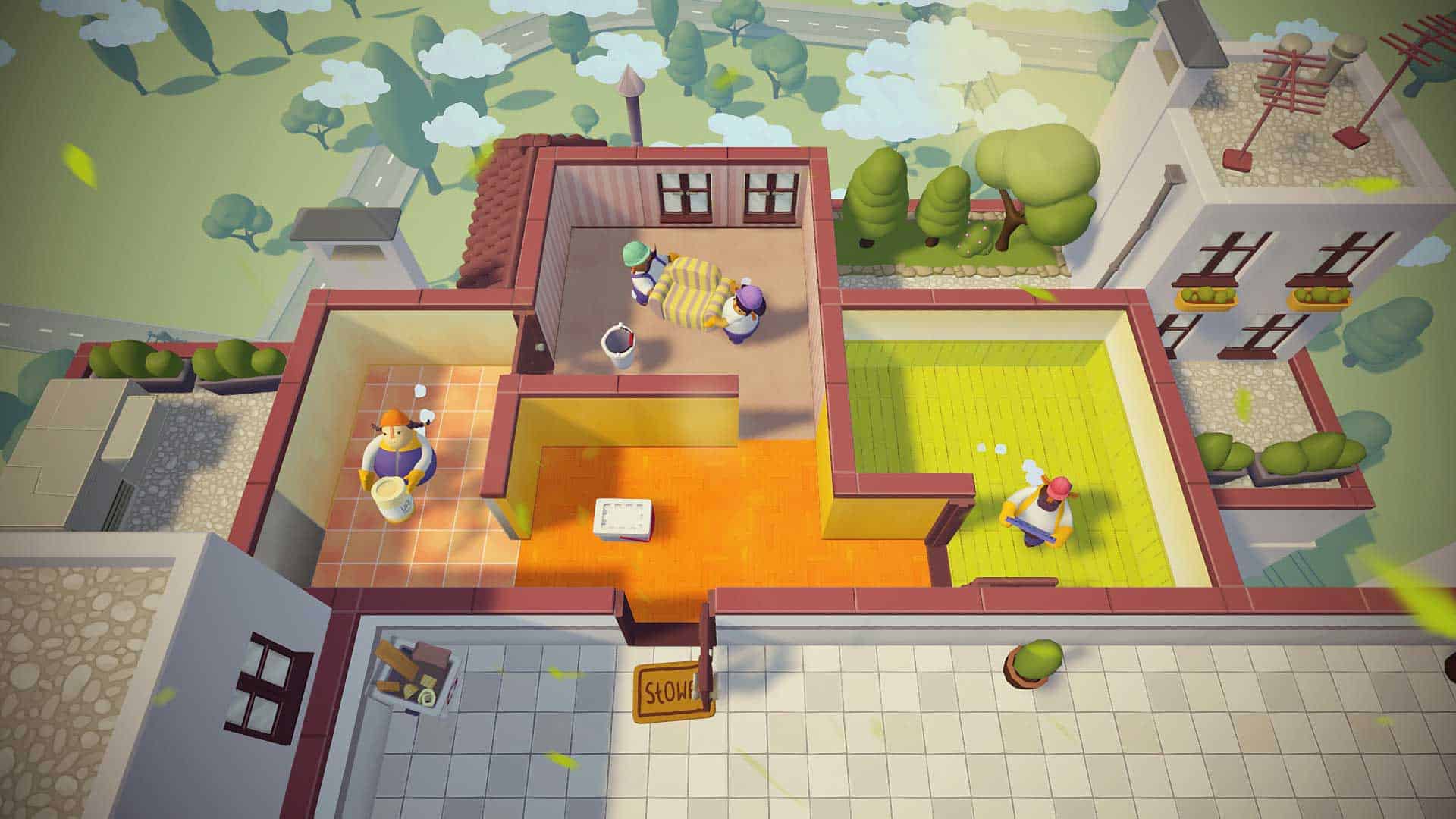 Each level delivered a tough challenge, even more so when played alone. A typical home required new walls which meant I had to pull off the wallpaper, toss it in the bucket, empty it, place glue on the wall and then new paper. It was surprisingly challenging to do alone and sometimes almost impossible. You see, the campaign can be played with three friends but at the time of this review, the timer did not scale higher if you have fewer players making some of the later stages impossible to do alone. One simply could not clean the entire house, renovate three rooms and toss over fifty objects out of the front door in five minutes. Unfortunately, it is a major downside of the game.

When I did play with friends, Tools Up really shined the brightest as the more players you have, the better things run. Communication is key as I would scream at someone to go fetch the paint being delivered at the door so they could start painting the room that I just cleaned up. The other players would be ripping the carpet up so I could go in and place new ones down. It ran like a well-oiled machine – until it did not. Things get chaotic and hilariously addictive after a while. Paint spills on the floor which causes you to trip over things and cause a mess. The mess needs to be cleaned in order for the level to be completed. You can even pick other players up and toss them across the stage which often left me trolling my friends by throwing them into a pool of water. 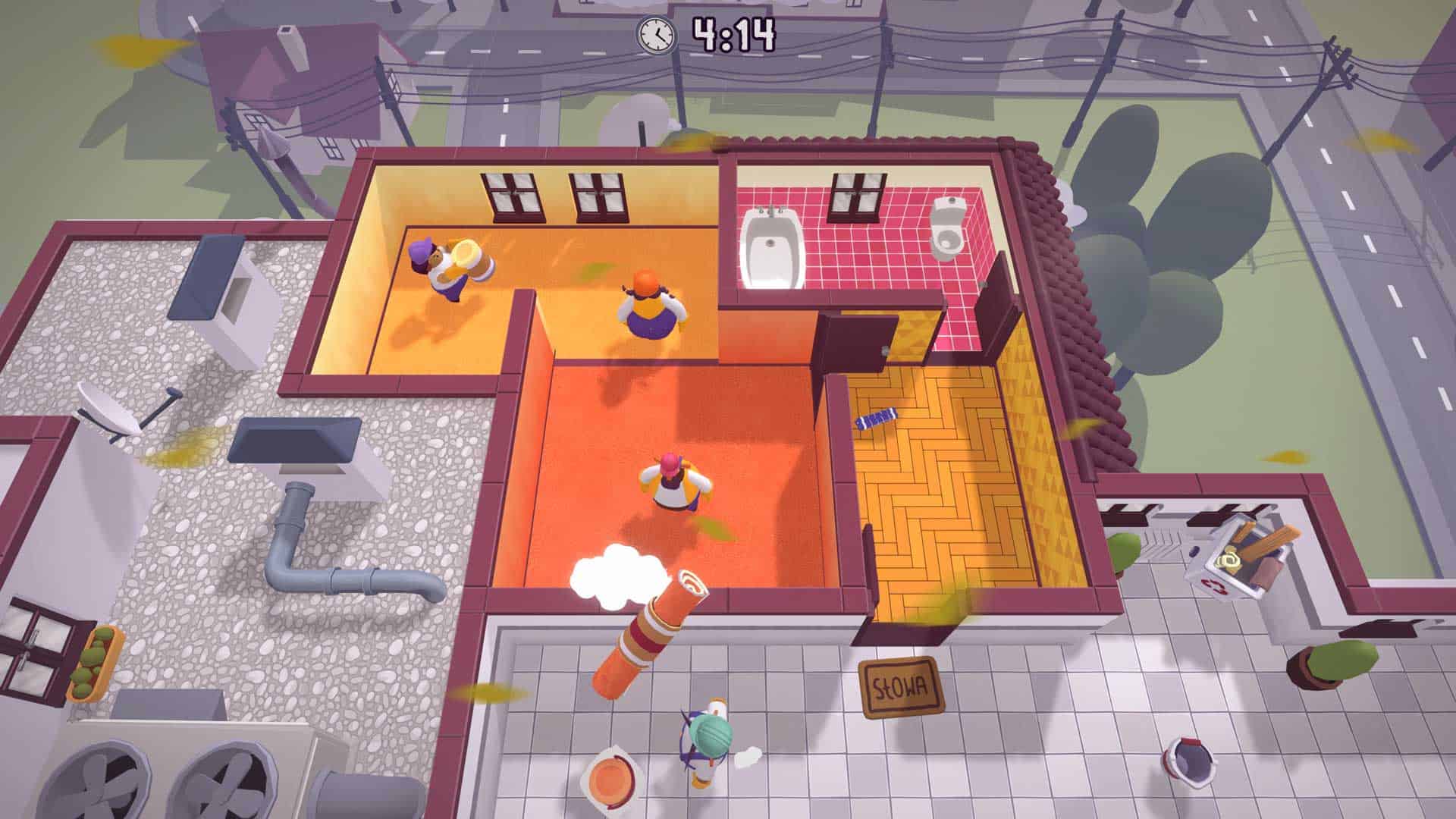 Things get even more challenging later on as certain floors have a cooldown so you can’t walk over that spot for a few seconds after glueing the carpet down. It often left me trapped in a room while the timer ran out. It may sound like a small mechanic but when you have all your friends screaming at you because you blocked their pathway, things get extremely hilarious.

Tools Up remains quite one-note for much of the game. While the later levels deliver a tough challenge, once you hit the midway point, the gameplay does not change much which affects the pacing. It still remains fun to play with friends and the new environments deliver some quirky mechanics like frozen floor which you can slide across but other than that, nothing much changes.  Just when you think a new stage will introduce something new, it is pretty much the same thing. 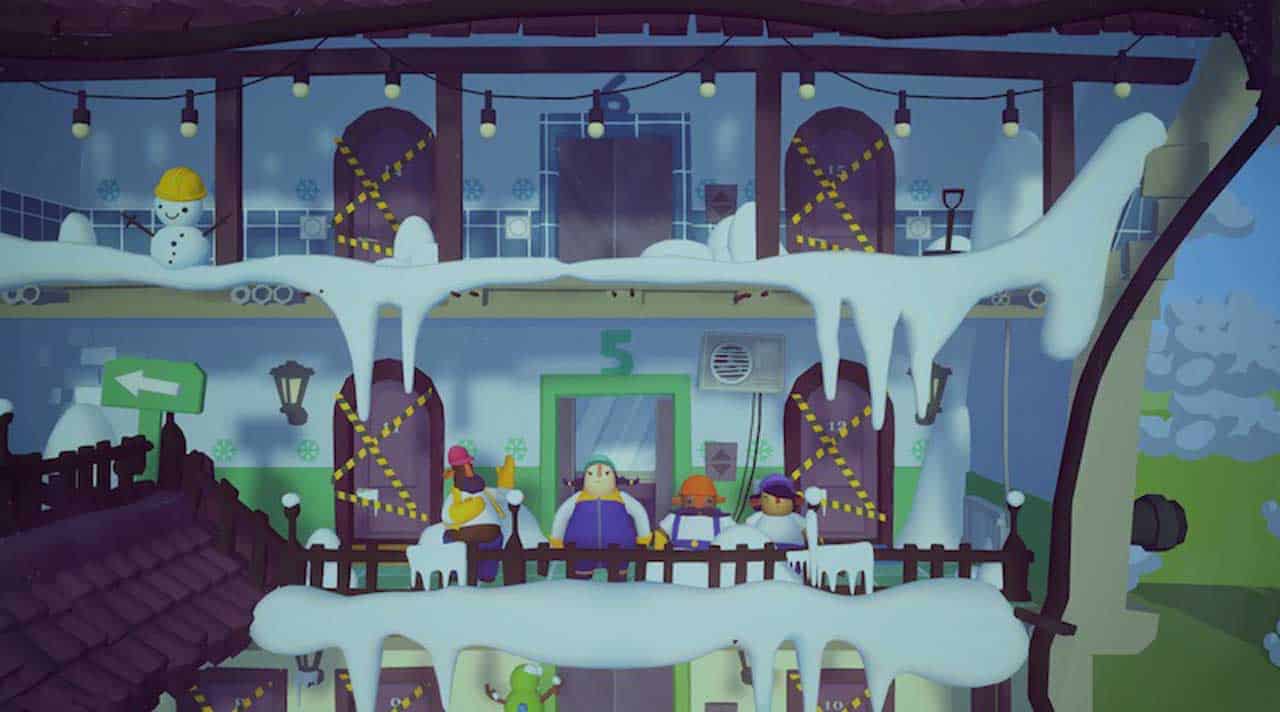 The game has a collection of levels to complete which can last a couple of hours. They are fun. The time attack mode is also a nice break but the levels are the same so nothing much going on here.

I enjoyed Tools Up. Could it have been better? Yes as it often felt like it was playing things safe with its simplistic gameplay design. However, it made me laugh, punch my brother on his arm when he ruined my newly-placed carpet and entertained for a handful of hours. That alone is enough for its asking price. Do I recommend it? Well, if you love these sorts of games then of course!

This Tools Up review is based on a code sent to us by All In! Games.