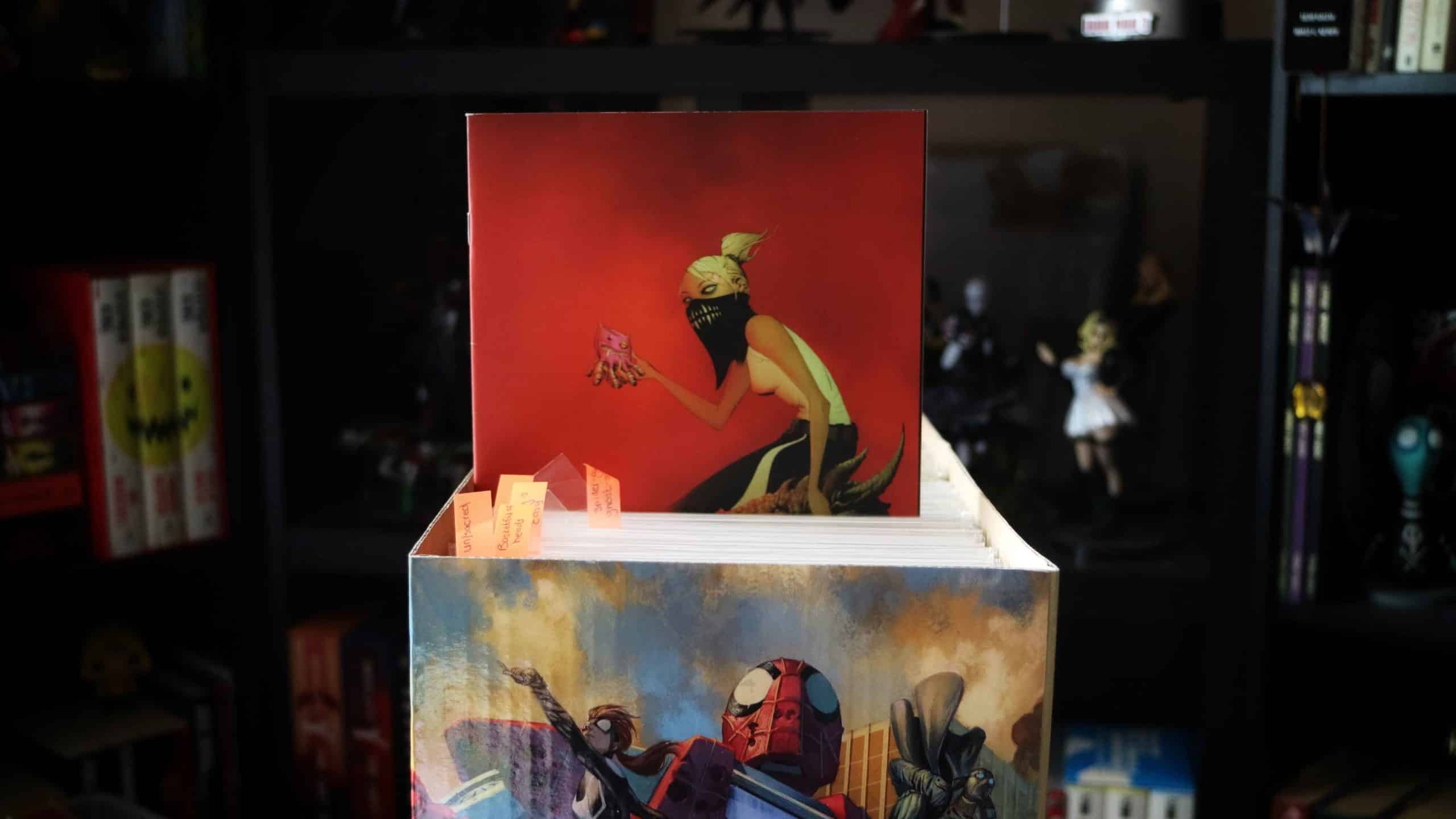 If you’ve seen any of my posts here on GLITCHED, it should be pretty clear that I absolutely love comic books. I can still remember receiving my first ever comic like it was yesterday, an Archie Double Digest that my dad brought home for me. That quickly spiralled into me wanting every single comic I laid my eyes on. I didn’t care about genre, or if I knew who the superhero was, I just wanted all of them. This was also where the collector in me was born – thanks, dad.

Because my love for comics started so early, I was lucky to ask all the annoying questions before I was old enough to no longer be comfortable doing that, meaning I grew up already knowing most of what’s what’s in the comic world. However, most people I know never grew up in and around the comic world as I did, and now, as adults, they feel completely alienated by it all and don’t know where to even start. This post is for them. If you’ve ever wanted to get into reading, collecting, buying or selling comics but feel at a complete loss with all the comic book speak thrown your way, then this post is for you. I’ve put together a list of terms and helpful info that should be enough to get you started in no time – enjoy. 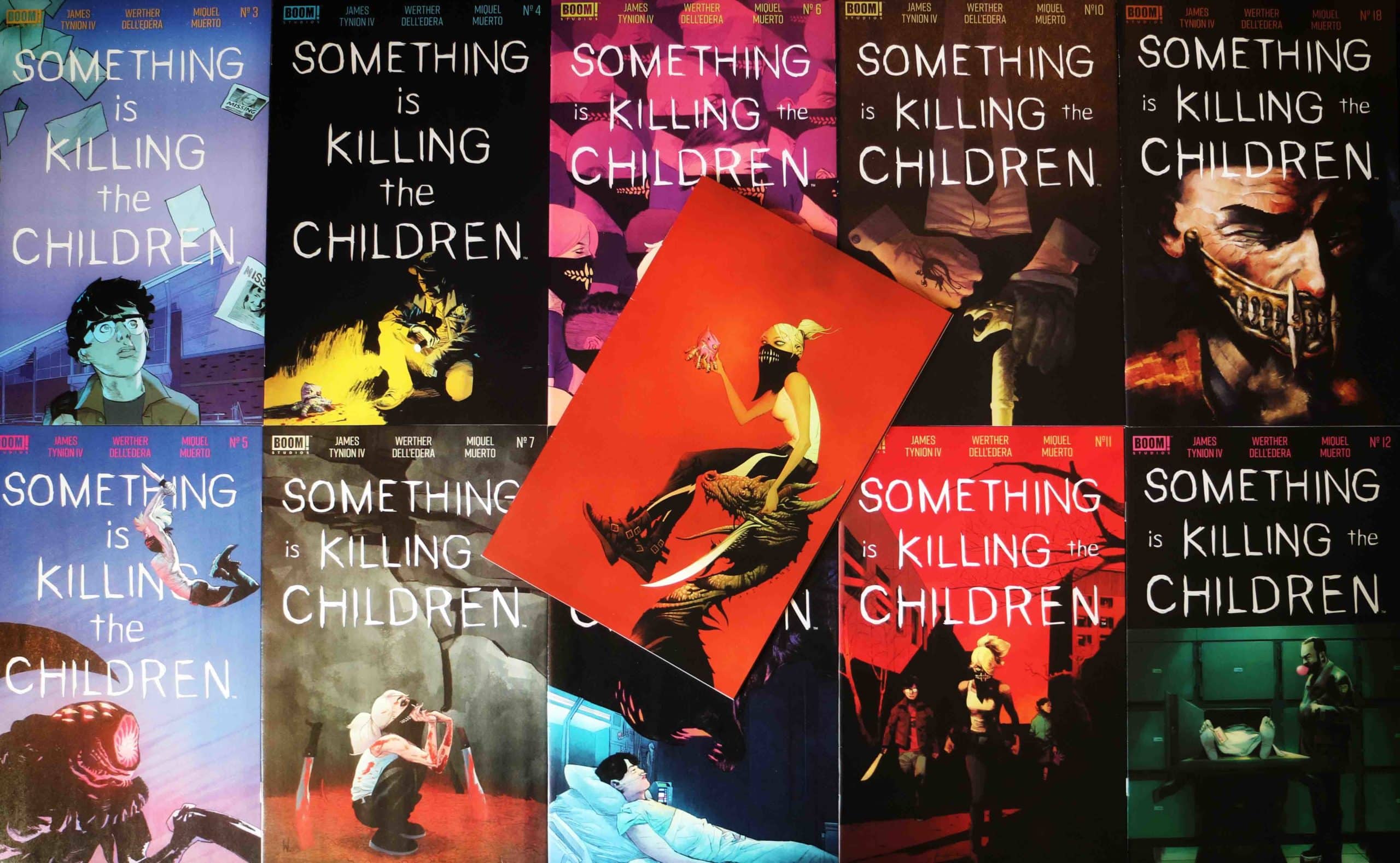 Comic Books and Where to Find What?

Okay, so you’ve just walked into a comic book shop for the first time. Where do you go? Where do you start? You can find most comic books divided into “The Big Two” and “Indies”, but what does that even mean?

The Big Two refers to Marvel and DC comics, the two biggest publishers around. This is where you’ll mostly find your superhero comics. So if you’re looking for the latest Batman, Harley Quinn or Superman comics, you’ll find them under DC. However, if you’re looking to pick up Iron Man, Hulk or Dr . Strange comics, you’ll find them under Marvel. Marvel and DC – or The Big Two – are usually stored close together in the same section of the shop.

The other section you’ll see is the “Indie” section. Indies are pretty much any comics published by anyone who isn’t part of The Big Two. This is where you’ll find comics published by: Image Comics; IDW Publishing; Boom! Studios; Dark Horse Comics; and Omni Press. There are lots of other Indie publishers, but these are the bigger ones. This is where you’ll head if you want to pick up titles like “The Walking Dead”, “Invincible”, “Something is Killing the Children”, or “Y: The Last Man”.

Comic Types To Look Out For

Now you’re in the right section, you’ve found the series you’re interested in, but you face another problem, which of the many formats do you pick up? Comics are usually divided into: 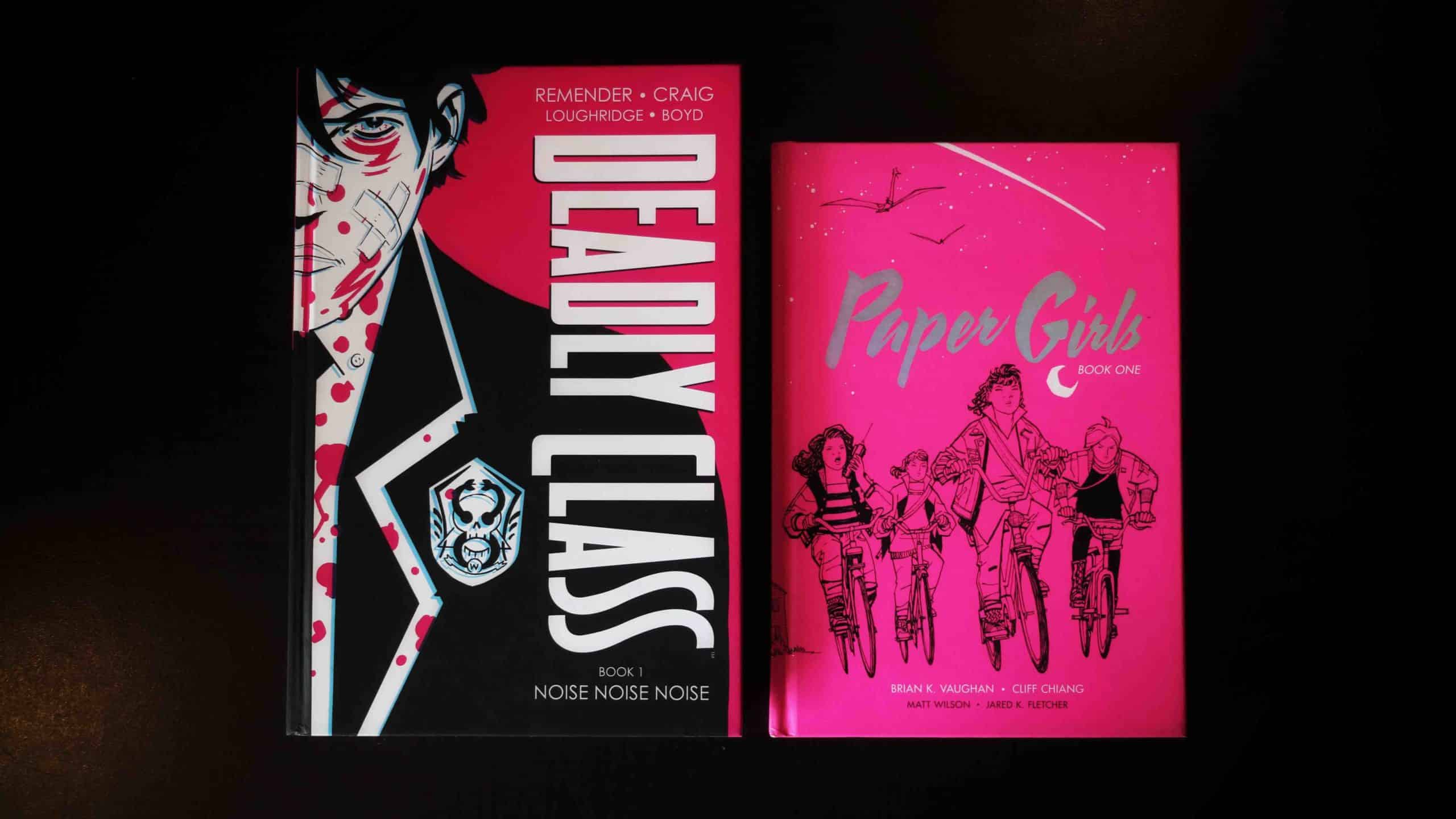 As I said above, Library Editions, Ultimate Editions, Absolute Editions, Oversized Hardcovers and even Deluxe Editions are all pretty much the same thing under different names. They are bigger and thicker than regular hardcovers, and most of them collect roughly 25 Issues per book. Like with Deluxe Editions, all of these will usually contain something special inside for you – be it an extra “special” issue or just never before seen artwork. In the pictures above and below, you can see how my Deluxe Edition Deadly Class compares to my Deluxe Edition Paper Girls in terms of size and thickness.

Comic Book Variants and How to Tell What You Have

When it comes to Single Issues or Floppies, there are a few things you might want to know. The first thing you want to know is what variants are? Variant comics are “limited” or “special editions”. They contain the same content as their regular counterparts, but their covers are always different.

The types of variants you get are:

Comic Book Barcodes and What The Numbers Mean?

Looking at the barcode below, we can see that next to the main barcode is a second smaller one. Above the smaller barcode, there are five numbers. These five numbers will tell you everything you need to know,

Now let us break down what these numbers mean. In this case, the first three digits, “001”, refers to the issue number of the comic. So now we know that my comic is issue #1. If it was a long-running series, and let’s say I had issue number 300, then the first three digits would be “300”. The fourth digit of the code is “2” this tells us that my comic is a variant. Regular comics always have a “1” assigned to them. Any other number tells you that your comic is a variant. The last digit in my barcode is “1” this tells us that this particular comic is a first print. Like with books, comics have first prints, which are usually more valuable than second or third print runs.

So if we look at the barcode for the first comic again, “00121”, and break it down: “001” = Issue #1. “2” = Variant. “1” = First Print. And that’s it. That’s how you can get all the info about your comic directly from the barcode. While this won’t be something that most even think about, it is handy to know if you plan to sell comics or buy them as collector pieces. Also, it’s just pretty interesting.

There are a few terms that are used quite often and are good to know, and they are:

The grading system for comics is as follows: 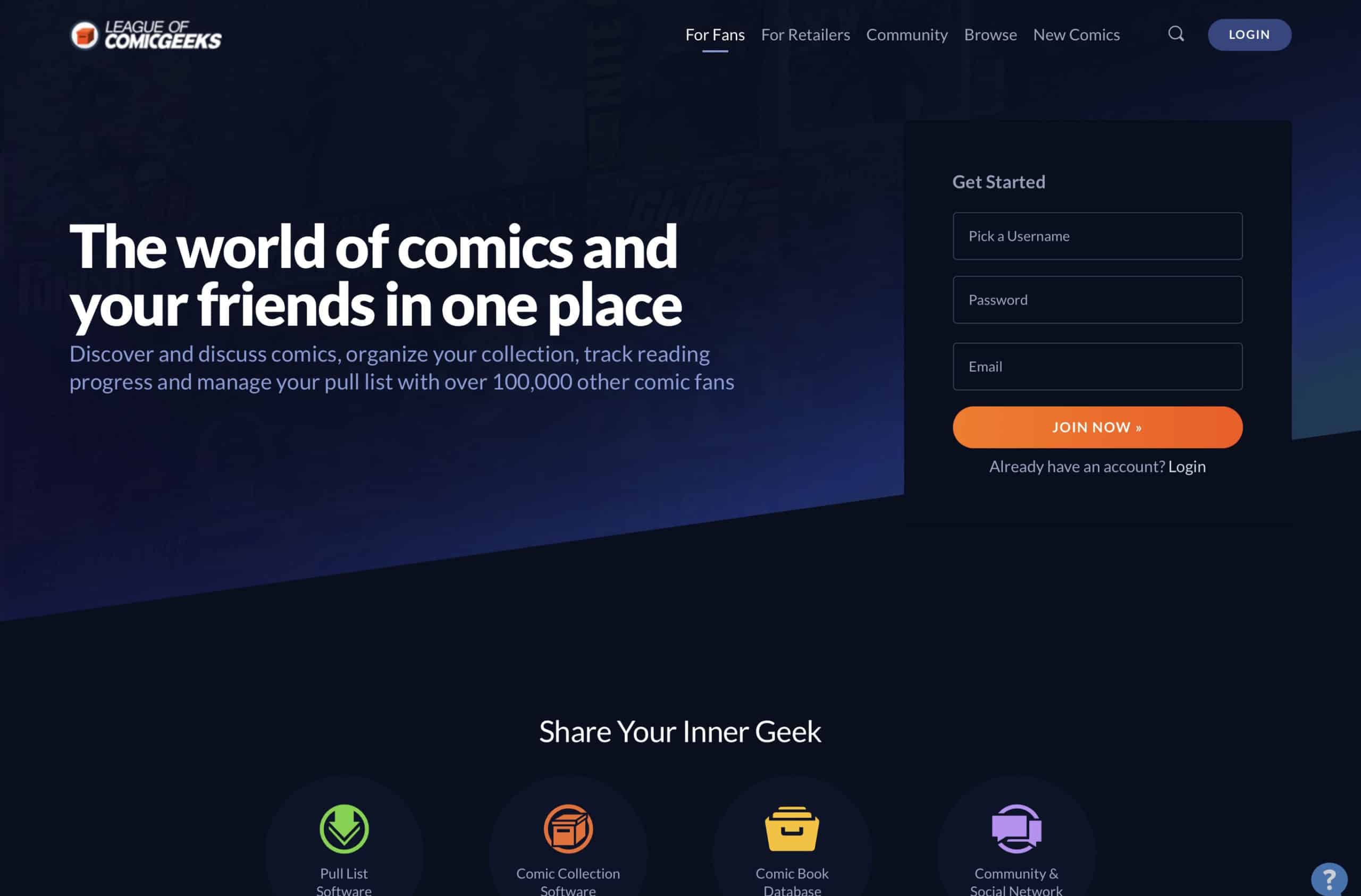 Finally, let’s touch on one of my all-time favourite comic resources League of Comic Geeks

Once you start collecting comics, you’ll want an easy way to catalogue them so that you can quickly know what Issues you’re missing and which series you want to keep an eye out for. That’s where League of Comic Geeks comes in. The site lets you easily list which comics you already own, lets you set reminders for when new issues come out for the series you want to collect and enables you to connect with other comic lovers.

And that’s it. You should now be ready to go into any comic book store you want and own the place with all your newfound knowledge. But remember, with great power comes great responsibility. I hope you found this list helpful, and if you still have a burning question, pop it in the comment section below, and I’ll be sure to help however I can. Now go forth, buy all those comics you’ve always wondered about and join me in being perpetually broke. It’s fun here.

Writer
Arielle is a writer who spends more time indoors writing about comics, games and all things geeky than what her mom would approve of. All Arielle wants is money in her bank account, but somehow, she keeps buying collectables that stop that from ever happening.