Let’s start this off with two quick warnings before we get into it (because everyone knows warnings are a great way to start things off). First, here be spoilers. Lots of spoilers. So if you haven’t watched the WandaVidision ending yet, click away from this post, watch it and then meet me back here.

Secondly (and you should actually do this BEFORE you heed the first warning and leave), make sure you have all the tissues handy. Not since Tony Stark’s death have I had my heart squeezed quite so tightly in my chest – I’m telling you, this was “I love you 3000” all over again.

Now that we have the formalities out of the way and I’m slowly gaining control over my tear glands again, let’s discuss some of the more “interesting” things that happened during the finale and of course, WandaVision ending and secret endings.

Oh, and just one more thing, I won’t be going into a lot of detail about who the main characters are in this post. If you want to know more about who’s who, then you can read my post ‘here‘. Also, if you missed any WandaVision Easter Eggs, check them out here. We start the finale directly where we left off WandaVision last week; Wanda and Agatha stand outside in the street with Agatha holding Wanda’s twin boys hostage.

Agatha reveals that she’s not actually interested in the boys and instead just wants to fight Wanda. The boys are released, and the first spell is thrown.

Wanda throwing spells at Agatha turns out to be precisely what Agatha wanted, she tells Wanda how she can absorb magic, meaning every time Wanda hits Agatha with a spell, she gets weaker while Agatha gets stronger.  We never do find out why Agatha wants Wanda’s powers though.

As all of this is happening, we see that Wanda’s hands are starting to turn black as her magic is being sucked out of her.

This is an interesting departure from the Agatha we know from the Comics, who served as a mentor to Wanda, teaching her to use her magic and helping her to become the Scarlet Witch.

Flash forward a whole bit, and we get to a scene where Wanda and Vision leave their two boys to take on the S.W.O.R.D infantry while they go deal with White Vision and Agatha, respectively.

This is a fantastic scene because it gives us a glimpse into the future. We get to see the heroes Tommy and Billy will eventually become, Speed and Wiccan.

Billy (Wiccan) uses his magic to freeze all the S.W.O.R.D officers in place, while Tommy (Speed) uses his Super Speed to run around and disarm the officers. Billy also gets one more moment to shine when he literally catches a bullet from midair. Wanda and Vision sure made some talented babies. 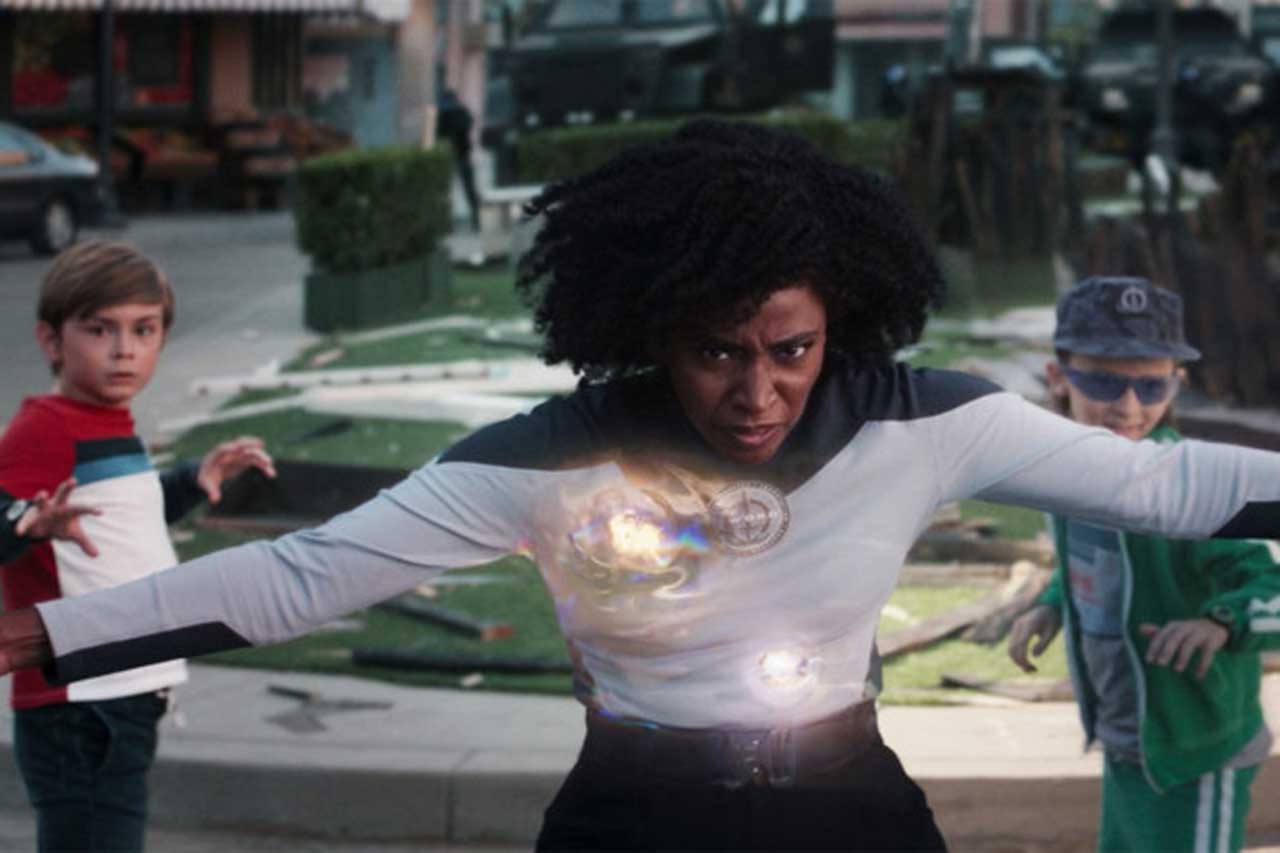 This same scene is also Monica’s first time to really show off some of her powers and shine.

When she sees Hayward pointing his gun at Billy and Tommy, she literally throws herself in front of the boys as the weapon is fired, and instead of being shot, the bullets all just pass straight through her as if she is nothing but a giant ball of energy… oh wait…

I really love that instead of just going straight ‘Captain Marvel’ with Monica that they seem to be playing into her as ‘Spectrum’ too, you notice this most with her eyes changing colour depending on what type of energy she’s channelling. 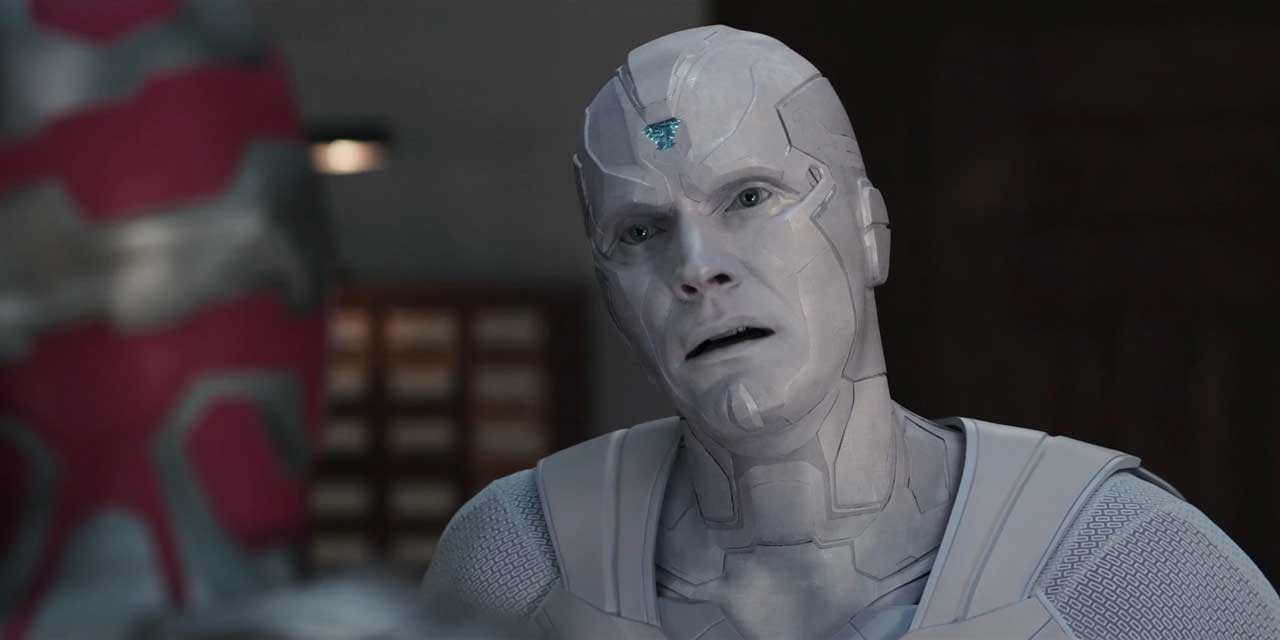 Of course, we can’t talk about episode 9 without addressing White Vision. In the comics, as in the show, White Vision is an empty shell of the Vision that we have come to know and love.

He is intelligent and super powerful, but he lacks any heart. This version of Vision exists entirely to serve the purpose for which he was programmed, not be distracted by feelings, memories, or free will. This is basically Vision with all of his humanity stripped away.

At the end of this scene, we see the ‘real’ Vision restore all of White Vision’s memories to him. We get a short flashback of Vision’s entire past, and just like that, White Vision takes off, and we don’t see him again… for now… 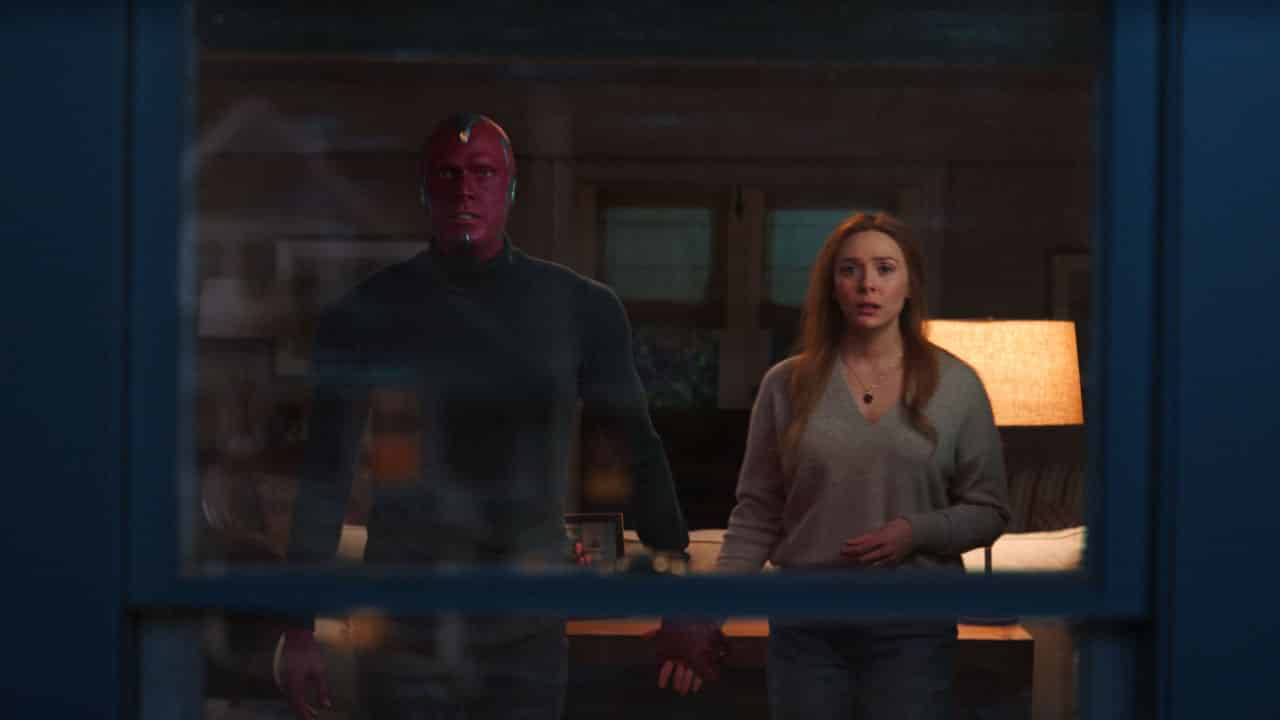 Thanks to some “not so gentle” nudging in the right direction, Wanda finally comes to realize that she is the villain of her own show and that she’s been torturing the people of Westview for her own selfish gain.

This leads her to know that she needs to lift the Hex and give everyone their lives back, restoring them and everything else in Westview to the way it once was.

The twist? When the Hex is lifted, Wanda’s family that she created, Vision and the twins, will no longer exist.

The following goodbye between Wanda and Vision has got to be one of the saddest moments in recent TV history. It’s just so heartfelt and raw that it’s honestly hard to watch while keeping dry eyes.

I honestly didn’t think that over just a few episodes, Wanda and Vision had grown on me so much, but the cutting feeling in my heart while watching this scene told me that they definitely did.

Once everything is said and done, the Hex is lifted, reality is restored, and Wanda is left standing in the same empty plot of land that she was standing in when this entire story began.

We then have a brief scene between Wanda and Maria where Wanda admits she doesn’t truly understand the powers she has, but she plans to figure it out, which, if you ask me, is a nice little teaser to the upcoming “Doctor Strange in the Multiverse of Madness” which she will be staring in. And with that, WandaVision Season One is over. It was a fast-paced, strange, enduring, yet somewhat ominous ride with an ending that lived up to that.

At the end of the episode, there are two post-credit scenes, one about Maria and one about Wanda, that you need to see. I’m not going to talk about them here, but trust me, you must watch them.

There are a lot of loose ends left lying around, along with some subtle (and some not so subtle) hints about where the future stories plan to take us – and honestly, I can’t wait.

Marvel and Disney really did an excellent job with WandaVision as a whole. They then gave us an ending that showed us real character growth and made me feel for two characters that I never thought twice about before. It’s the mark of genuinely spectacular storytelling, and I only hope they keep this level of quality moving forward.

You can get up to a 20% discount on your next comic book purchase over R300 at Critters and Comics by using the “Glitched20” coupon.