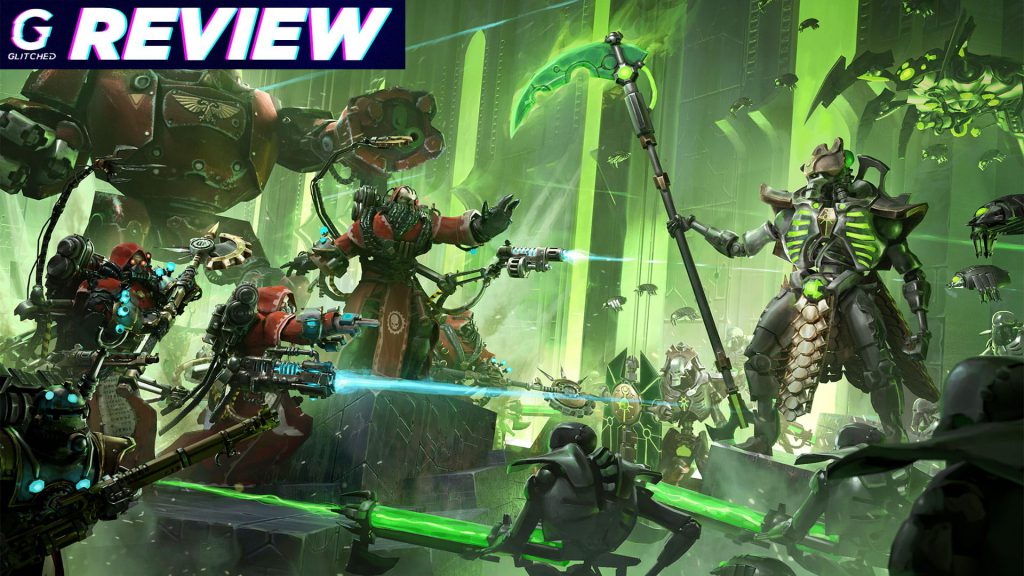 It feels like forever since we last had a great tactical, turn-based game to sink dozens of hours into. With Warhammer 40K: Mechanicus, developer Bulwark Studios has delivered just that. Right from the start of the game when the opening cinematic played, setting the stage, I could feel the love and dedication from the developers.

If you love the Warhammer 40K universe, or you simply love games like XCOM 2, then Warhammer 40K: Mechanicus is a title that you should strongly consider. Jumping into the mechanical boots of Dominus Faustinius, a Magos high-commander in the Mechanicus order, I led my Tech-Priests through a newly-discovered planet inhabited by a semi-dormant alien race. Everything in the game just oozes Warhammer 40K as you get that feeling that every character, enemy or friend, is a little bit bonkers, to begin with. 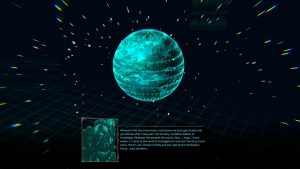 If all these words like Tech-Priests and Mechanicus don’t sound familiar to you, then don’t worry, you are not alone. At first, I struggled to understand what was going on myself, so let’s break the premise down. Mechanicus is an order that worships a machine god called Omnissiah. This order replaces their “weak flesh” with metal and it’s all about achieving immortality and soaking up more knowledge for these guys. With your Tech-Priests, you explore a planet filled with Necrons, an alien race with the power of resurrection. There’s clearly a lot for the Mechanicus order to learn from this alien race and your goal is to gather as much knowledge as possible through exploring various tomb-like dungeons before the Necrons fully awaken and you have to hightail it out of there.

The story’s pacing is well done and when you throw in player choice and multiple endings, it really shines. Throughout each mission, you can make multiple choices that can and will affect the outcome of the game. For example, I could run from a tough encounter, try to hold off waves, or face the enemy head-on. I could choose to carefully inspect an object or just grab it. All these choices have consequences. If you make the wrong choice, you might lose some of your most precious servants in the process, or greatly damage their health. 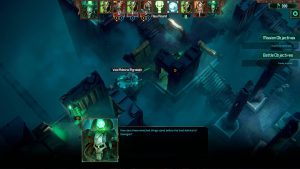 Every Tech-Priest I had access too felt unique and I could customize them by levelling them up, adding points into six different skill trees, from Explorator to Engineer and even Dominus, which gives is all about the buffs to your minions. There’s a sense of dread when coming close to losing a character forever and this gets multiplied further by a system which shows how close the Necrons are to fully awakening. With this system in place, you won’t be able to complete all 50 missions before the time runs out in this great war of attrition, so multiple playthroughs are definitely in the cards.

The game has some very deep systems at play here, from weapons that can only be used when you have enough Cognition Points (CP) filled up through combat, to a ship system from which you start missions. You can upgrade your ship in several ways and also gain access to what I can only call ultimate abilities with once-per-mission usage. That’s where the player choice comes in yet again as you have to manage your currency and decide what you require the most. For some, this might seem a bit overwhelming, but those who love tactical, turn-based games like XCOM, including myself, would say the more systems there are, the better. 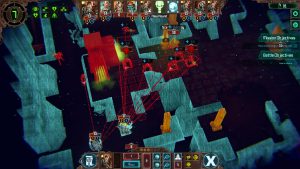 Warhammer 40K: Mechanicus kept me on the edge of my seat as for the first time in a very long time, I found myself tapping my fingers on my desk as I tried to make the best decisions all while being pressured with the time running out. It’s a feeling you simply don’t get in most games these days and that is thoroughly enjoyable.

The game plays off in three sections. First up, we have the holographic map-like aspect where you simply move your units from one room to the next. Many levels have multiple paths you can take, but some rooms are required to further the story and complete your mission. This is all portrayed with some great detail as you can see Dominus Faustinius hovering over the map. Then, when entering a room with enemies, the game goes into combat view. Lastly, you have your ship to which you return after each mission for upgrades and more decisions, such as which area you should explore next. 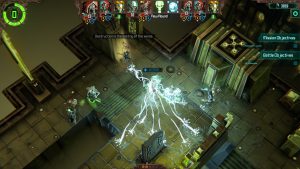 Combat works quite well, but it is less about taking cover than XCOM games and more about moving in and standing your ground. Some Tech-Priests even use melee weapons as their favourites. You also need to keep an eye out for multiple systems at play during combat, such as Necrons resurrecting (one hit after they are down kills them for good) as well as stuff like counter-attacks and placement at the start of combat. Then, you can also call in Servitors during some turns. These Servitors are your garden-variety meat shields that you use to soak up some damage to protect your all-important Tech-Priests.

Warhammer 40K: Mechanicus simply felt great to play for the most part and with an intriguing story to boot, it made my experience a wonderful one. However, there are a few minor issues I experienced. First off, the sound is a bit lacking and I would have loved to have fully-voiced dialogue that I could make out, instead of having to read it all. Then, I also experienced some input lag a few times during combat. Lastly, missions and enemies can start to feel a bit repetitive at times, but if you like the combat and the story, that shouldn’t bother you too much. 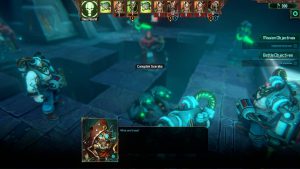 Performance wise, my gaming rig has an i5 at 3.2GHz, a GTX 960 2GB and 8GB of RAM. I could crank up the graphics of Warhammer 40K: Mechanicus to the max at 1080p with no frame-rate drops or freezes at all. The game runs smoothly and although the graphics aren’t groundbreaking, still manages to deliver some fantastic atmosphere that oozes everything Warhammer 40K.

If you love tactical, turn-based titles like XCOM 2, you will love Warhammer 40K: Mechanicus, even if you aren’t all that into the Warhammer 40K. The story and characters take a while to get used to and fully understand, but when you do and realize just how crazy everything is, the game really shines.

Warhammer 40K: Mechanicus features layers of systems that make gameplay in and out of combat a joy. It is complexed and rewarding as you level up your Tech-Priests, uncover a wealth of knowledge and gain a variety of perks and items for your characters to wield. This gameplay loop of heading into the next “dungeon” and taking on hordes of Necrons does become a little bit repetitive but thankfully there are player choices and multiple endings, as well as that sense of urgency in gameplay thanks to a system that shows you how close you are to a full awakening of the Necrons. The game looks great for what it is and apart from a few input response issues I experienced, it is technically solid. The only thing I wish was done better is the sound, which leaves a little to be desired.

In the end, fans of tactical, turn-based games shouldn’t miss out on Warhammer 40K: Mechanicus. It is a refreshing game in the massive Warhammer 40K universe that can and will suck you in right until the very end.