Warhammer’s first take on the ARPG genre is not a bad one. Sure the game is a tad shallow in some regards and the overall experience feels a little diluted compared to the Diablo series but there was nothing better than demolishing dozens of enemies in a wall of fire while calling down a rock from the sky as I teleported out of harm’s way.

Warhammer: Chaosbane’s strongest asset is no doubt its fantastic combat and it holds up during the 4-part campaign. You get to choose from four playable classes at the start. As it is the Warhammer series, the characters and classes derive from the great lore that has held the series up to modern standards. 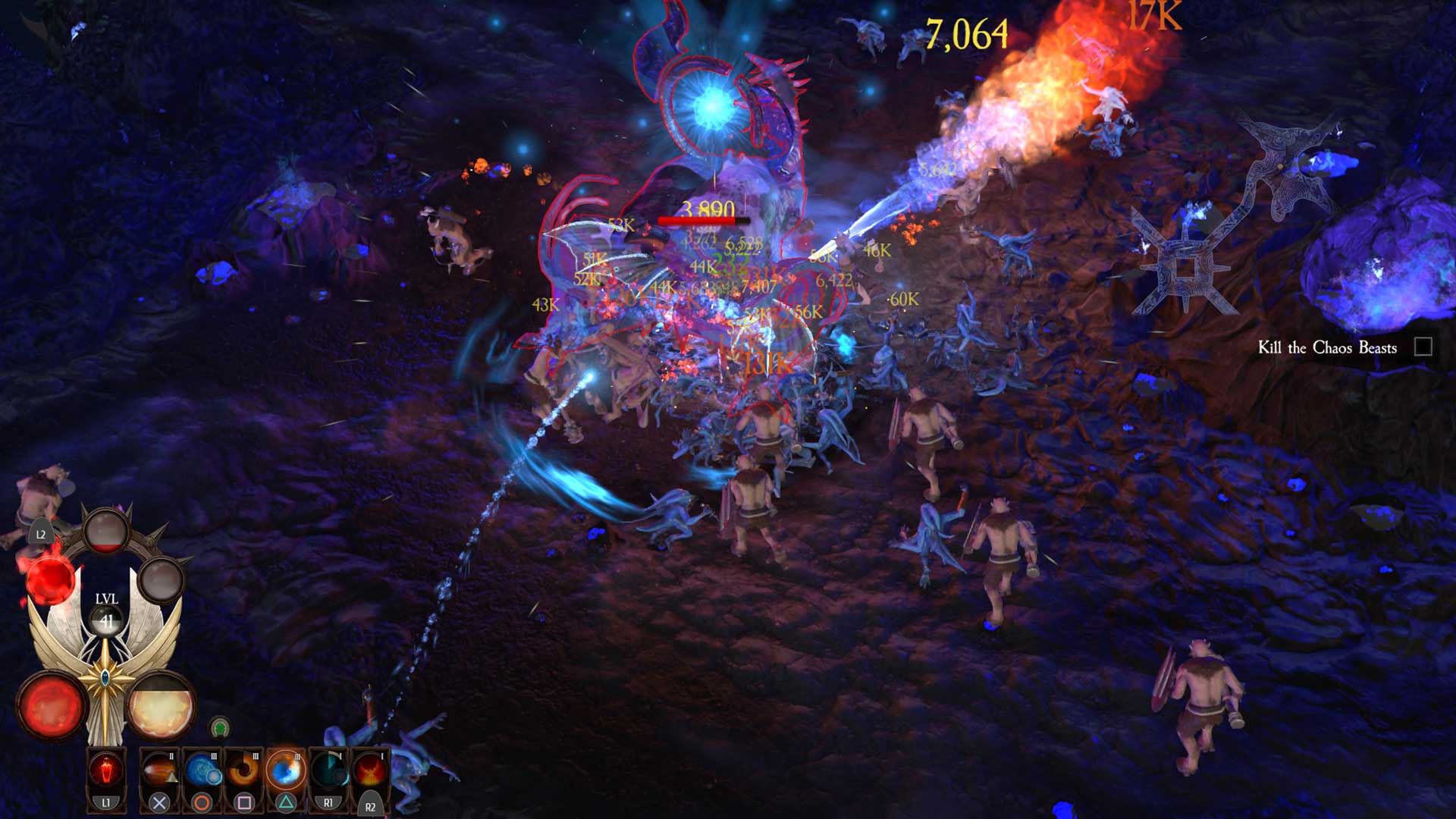 You have the Scout, a ranged class type that focused on poison and dealing powerful blows with her bow. The Slayer, a dual-wielding Dwarf that’s primary focus is high DPS. There is also the High Mage that casts deadly spells and deals elemental damage to enemies and the Empire Soldier, an all-around Knight with a focus on buffs, melee damage and counter-attacks.

As I always go with a magic build for every ARPG game, the High Mage was my first choice. Its focus on magic spells, a great sense of fashion and of course the ability to strike foes from a distance, made it a wise choice for a single player campaign. 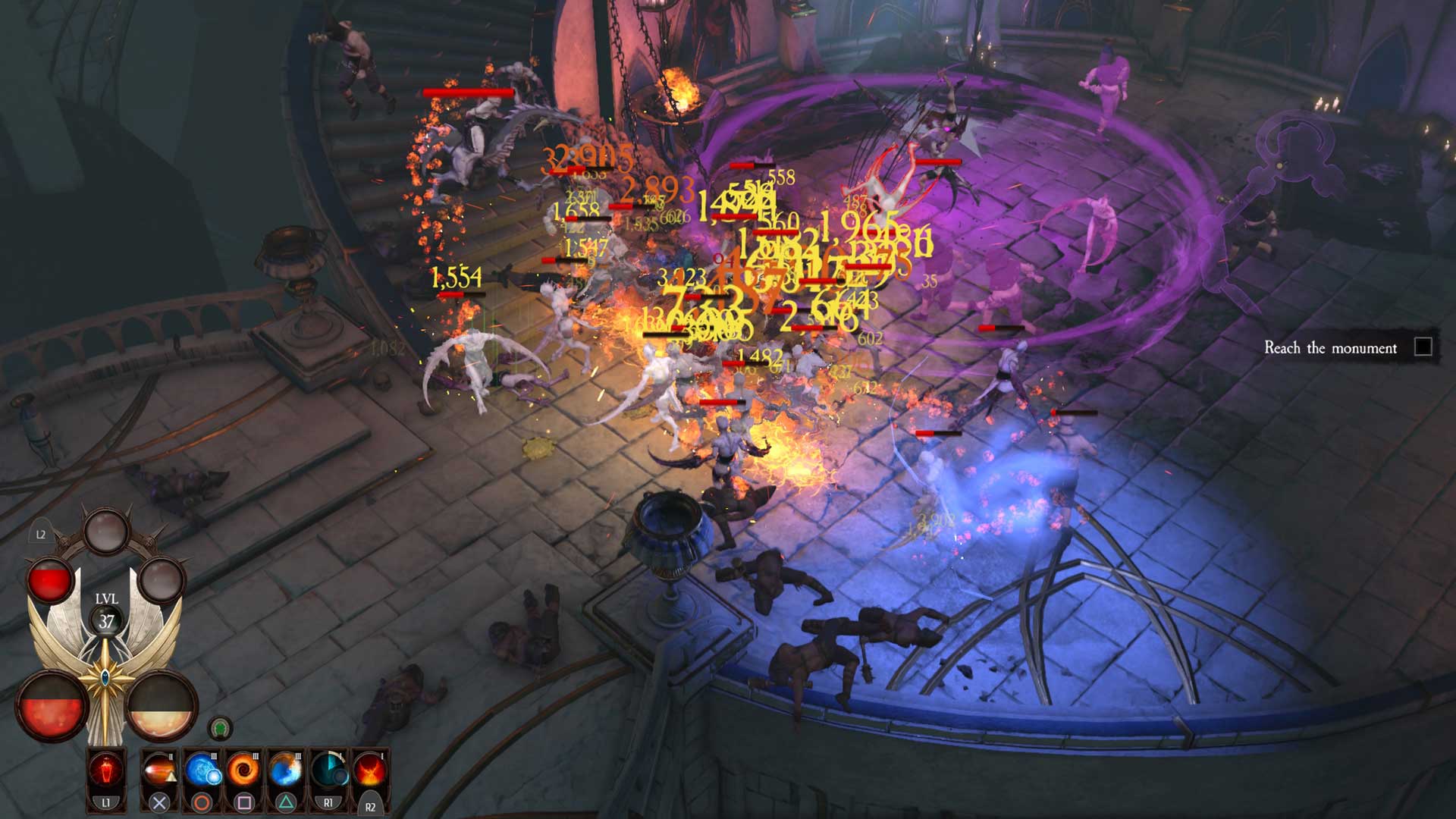 Warhammer: Chaosbane’s strongest asset is no doubt its fantastic combat and it holds up during the 4-part campaign

Warhammer: Chaosbane’s story takes the back seat throughout much of the game. You need to head onto different areas, take on different missions and ultimately kill a boss at the end of every act. This rinse and repeat process grows tiresome after a while. Instead of opening up new areas and gorgeous new locations to explore, you are stuck visiting the same chaos realm stage for a couple of hours before moving onto the next chapter.

Every act has a main hub that you use to pick up quests and undertake new missions, but the entry and exit to every mission is the same doorway. It lacks any real sense of adventure and discovery. It is one copy-and-paste area that has been linked to a town with very little to see and do there too. The game’s overall delivery of its world and exploration hubs lacks creativity and starts to merge together after a couple of hours. 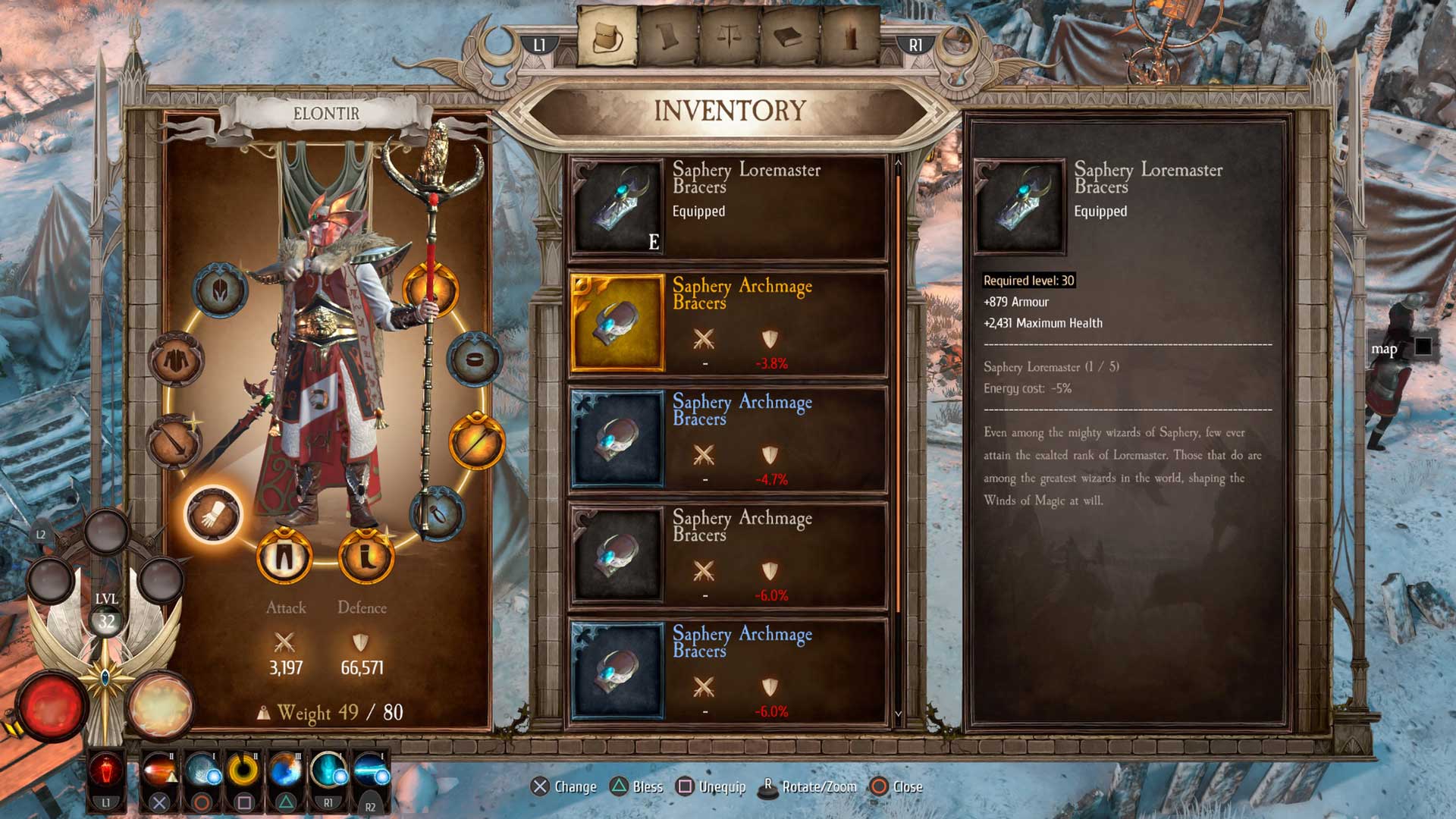 Enemies suffer from the same issue. Each chapter has a handful of different enemies to kill. Be it crazed fairy-like fish people, tentacle monsters or red demons. They all start to blend together too and after a while, they come across as reskinned enemies from the last chapter you just completed. Every chapter has that one big enemy that pounds the ground and explodes once you have killed him. They might look different but that is as far as its creativity goes.

The same is said for the lands you explore. Dull corridors with dead ends await every mission as you try to get through the levels as fast as possible. There is nothing to break the repetitiveness of the game. No random encounters of rare powerful enemies, no random events to change up the dynamic, and no separate explorable doorways that hide treasure away. It is the same rinse and repeat process for every mission and it gets boring very quickly. Item management is also a brainless activity. You can equip your character with various weapons and gear depending on your class choice. There is very little that goes into this system other than looking at what percentage is in green indicating that it will boost your stats. A trip into a mission is simply you just picking up gear, putting it on and throwing it away if it is useless at your current stat. There is nothing else going for it. Sure, you can work on a build by finding the specific gear that boosts specific stats, but these drops are so far and few between, it becomes a chore.

The excitement in Warhammer: Chaosbane comes from seeing your character go from a simple fireball-tossing apprentice into a fully-fledged mage with some crazy super powers. The journey may be bland but the combat makes up for it all. As this is an action RPG, the demolishing of hordes is as fun as can be. Enemies come at you by the hundreds and using your specific skills, you need to get rid of them in order to secure safe passage into the next area. 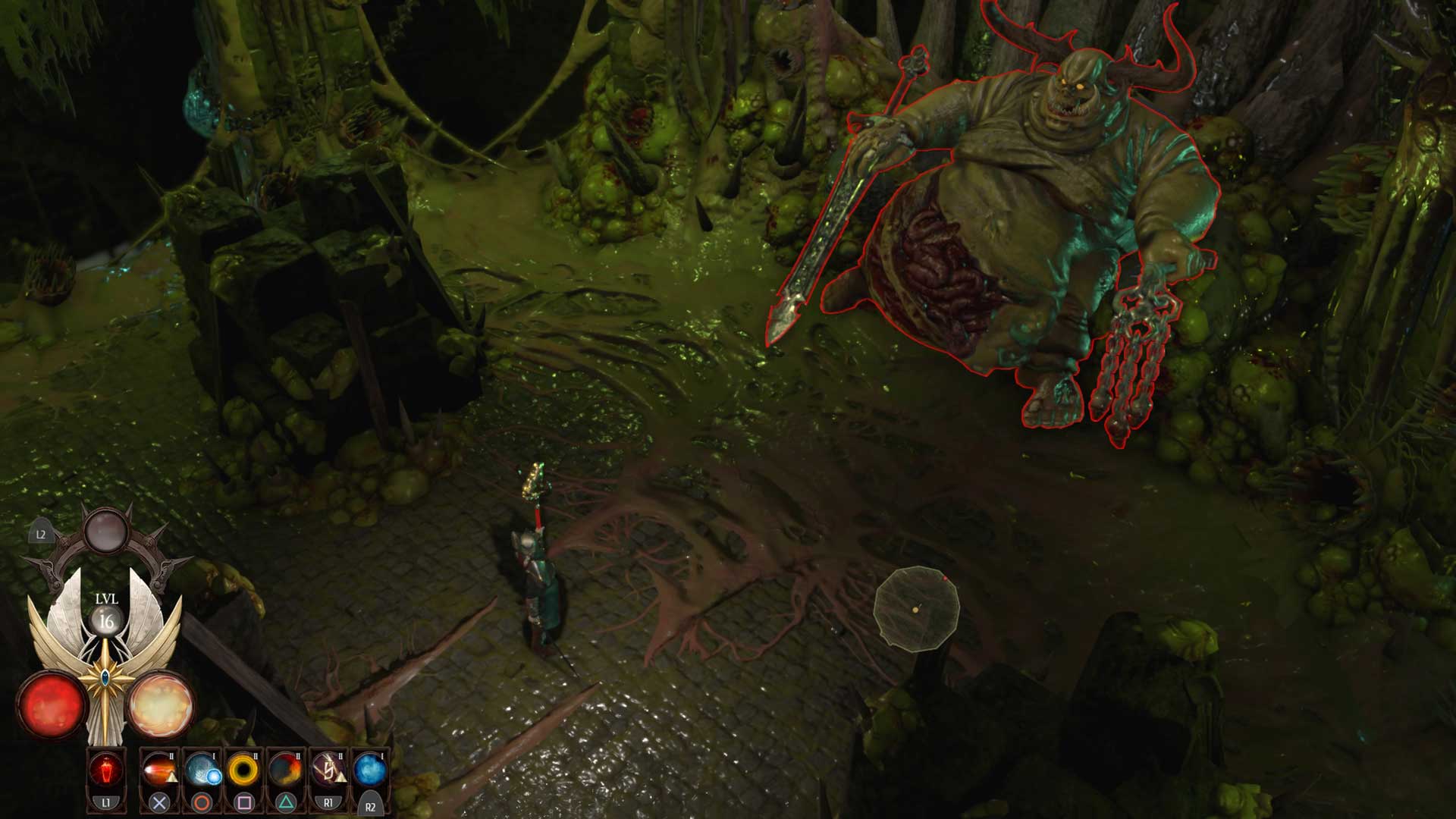 As you level up you will unlock new skills and points that you will need to use in order to equip a specific skill. Points are not spent in unlocking these skills, rather they determine how many powerful versions of each attack you may have equipped. For example, the “mastered” skills require more points so you will be able to equip two or three of them alongside basic skills. You could also just equip a load of basic skills which will count towards your skill point cost. The limit to your skills increases as you level up.

The game also has skills obtainable in a massive skill tree that is unlocked by spending relics on slots as you make your way through the giant and comprehensive build guide. Every node will buff your health, damage or defence so taking the right route is key to building the best character. This skill tree is mainly for the endgame content as you will spend most of your time tracking down relics and spending them in this tree. 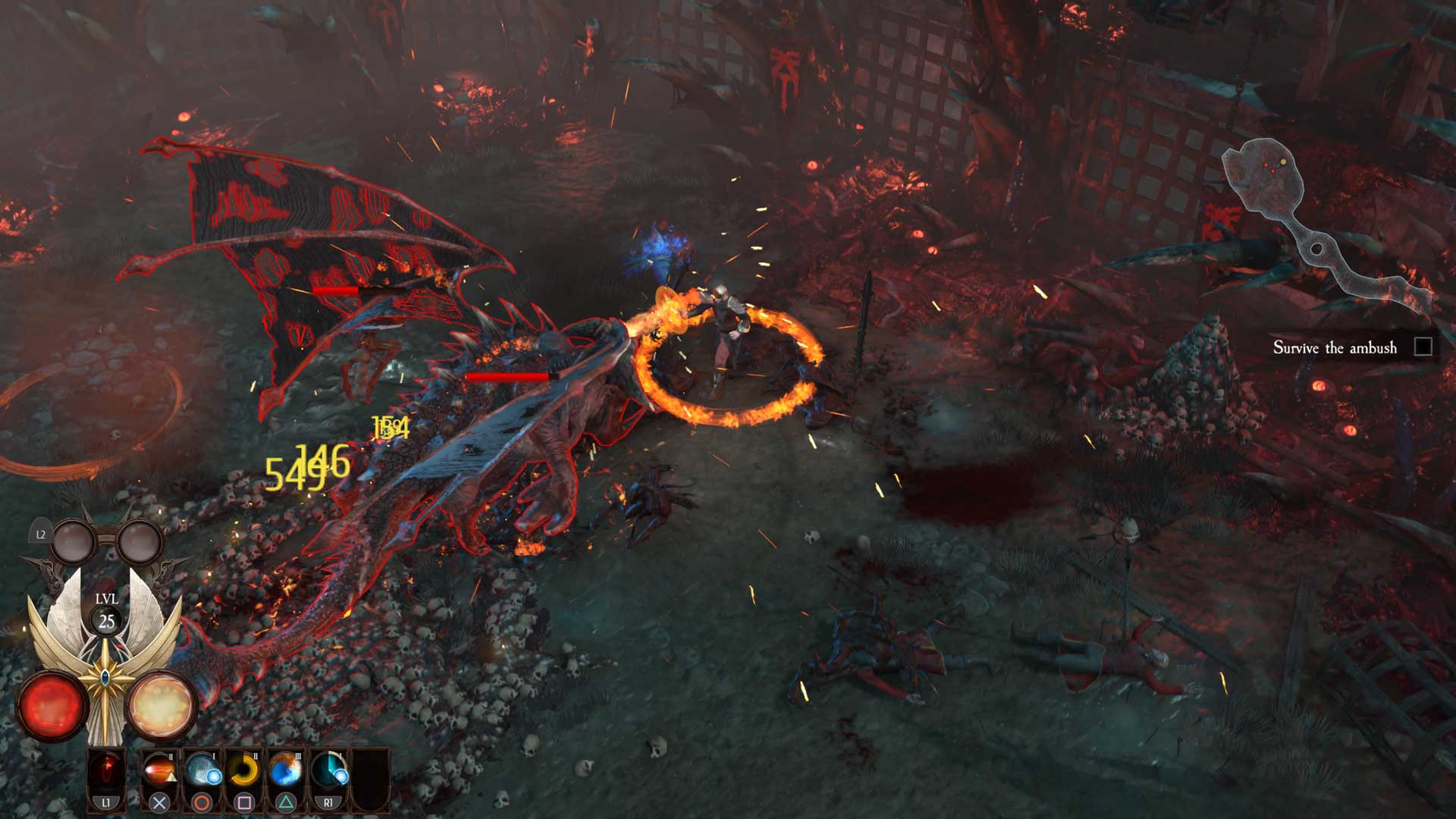 Lastly, we have reputation skills. Instead of a traditional merchant that sells gear in Warhammer: Chaosbane, we have a merchant that you trade in all your gear to in order to earn reputation. This unlocks buffs which help boost the regen rate of your abilities and health obtained by picking up red orbs. I personally missed the opportunity to sell my gear and buy new stuff from the merchant. Instead, you will spend your life trying to obtain drops from enemies you kill in hopes of it benefitting your build.

Skills and combat combined together to deliver fun and satisfying experience in Chaosbane. Sure, it gets boring very quickly given how shallow most of the game’s systems are but the combat manages to carry it through. Seeing dozens of enemies tear apart and burn alive with a giant wall of fire was fun and addictive even if I was doing it while watching Netflix. The harder difficulties promise tougher challenges and better loot drops but when I reached the end of the game, the thought of going back to the bland levels just made me feel demotivated. The boss fights deliver an exceptional break from the traditional combat but again, there are only four of them making this diluted and dull.

Warhammer: Chaosbane delivers some fantastic action ARPG combat set in the Warhammer universe. If you are looking for a mindless dungeon crawler then it will suit you just fine. If you are itching for a deep story-driven game with a layered and immersive world to explore then this is not for you. Chaosbane’s first attempt at the ARPG genre is a decent attempt. Its asking price is way too high considering the lack of content on offer here so I would personally wait until it is on sale.