The WarioWare series is known for its slapstick humour, rough-looking mini games and of course, giving Wario his time to shine. If you have ever played a WarioWare game before then you kind of know what you’re in for. You jump into a handful of mini-games that don’t last more than five seconds and have to constantly be on your toes to complete them before the timer runs out. You never know what these games are going to throw at you and they go from simple to extremely random and obscure. Often, these games are borderline “cheap” as they feature artwork that looks like it came from a 3-year-old. WarioWare: Get it Together is no different.

The foundation of WarioWare: Get it Together remains true to the series. However, instead of making use of motion controls and the Switch’s cool features, the game relies on controlling a character throughout the experience with a controller. I kind of hoped it would be the opposite and Wario’s first game on the platform would utilise the cool hardware Nintendo has. With the Switch Lite, this experience would not be possible. In a way, the Lite seems to be holding back the innovation a bit. WarioWare: Smooth Moves on the Wii was one of the best games around because it used the Motion Controller. This is more a platforming party game. 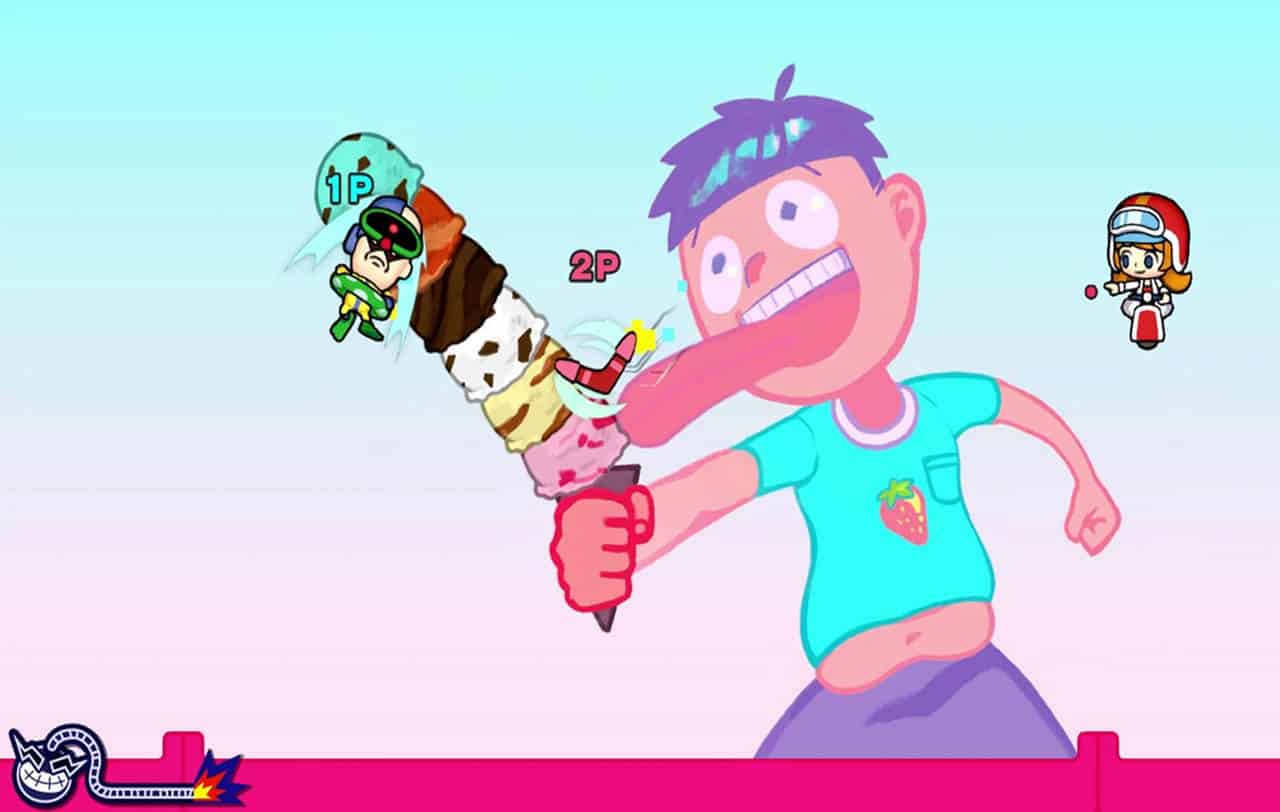 That is to say, WarioWare: Get it Together doesn’t hold back on the excitement as the game manages to keep the recipe intact while mixing up some of the series’ best features. The core experience is still about the mini-games but the ability to control the massive roster of characters adds a bit of variation to the game. This is both a good thing and a bad thing as some of these characters simply don’t work for some of the mini-games. As much as the game tries to pair you up with the character best suited for the challenge, often I lost my cool when I was given a mini-game that relied on shooting something on the roof when Orbulon could only beam downwards.

WarioWare: Get it Together starts off with its main story. Wario and his crew get sucked into a game he has been developing. They get scattered around this digital world and Wario sets of to find them and stop all the glitches from corrupting their games. Each game introduces a new controllable character and themes for the mini-games. Be it food, culture or just some random stuff. Each character is also unique and has its own playable style that I had to master quickly in order to get used to completing mini-games with them. 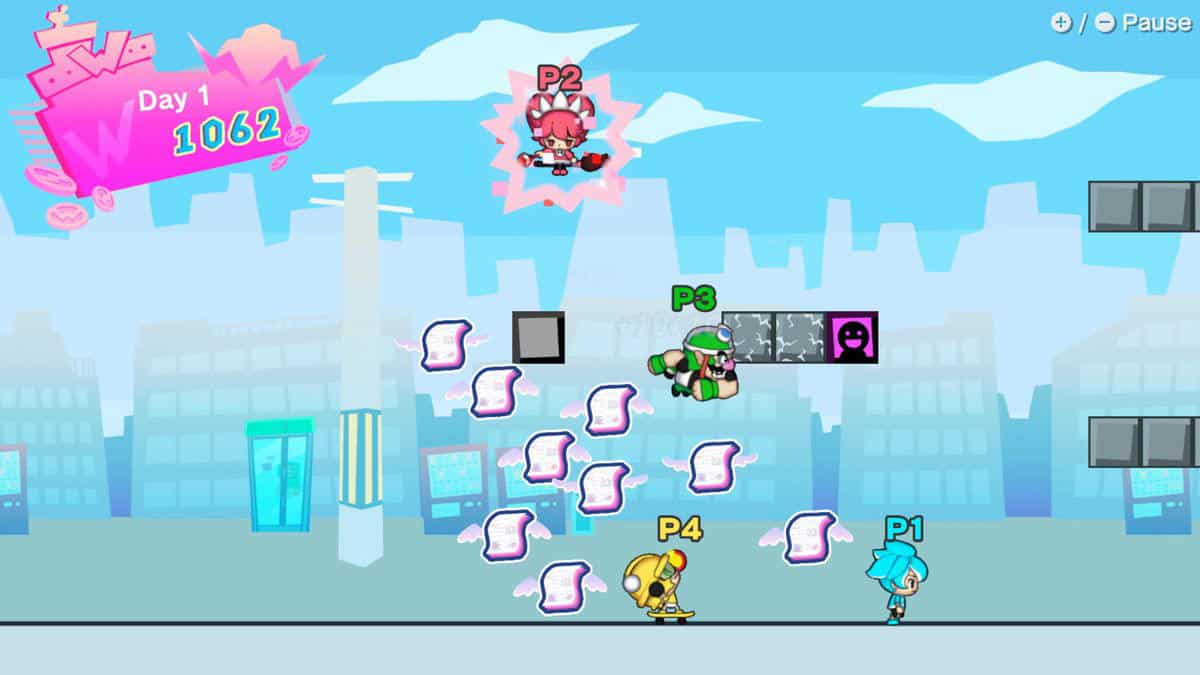 The story mode in WarioWare: Get it Together is decent enough. The plot goes to some extreme places but the characters and each of their themed games forced me to continue through the experience. Not to mention that each character also comes with a pretty great cinematic and upbeat soundtrack that I could not help but fall in love with. After hours of the game, I was humming and tapping my feet to the music. WarioWare: Get it Together is not short of personality by any means and you will want to play this game as loud as possible.

The story mode acts as a long tutorial in a way. There are 20 characters to obtain, a massive collection of mini-games to complete and as I completed them I moved on and found new characters and new games. The general flow of each chapter saw me watch a cool cutscene, enter the game and play through about 15-20 mini-games without failing one of them. Well, I tried to not fail anyway. As I mentioned before, some characters just don’t gel well with the games due to their movement restrictions and attacks. 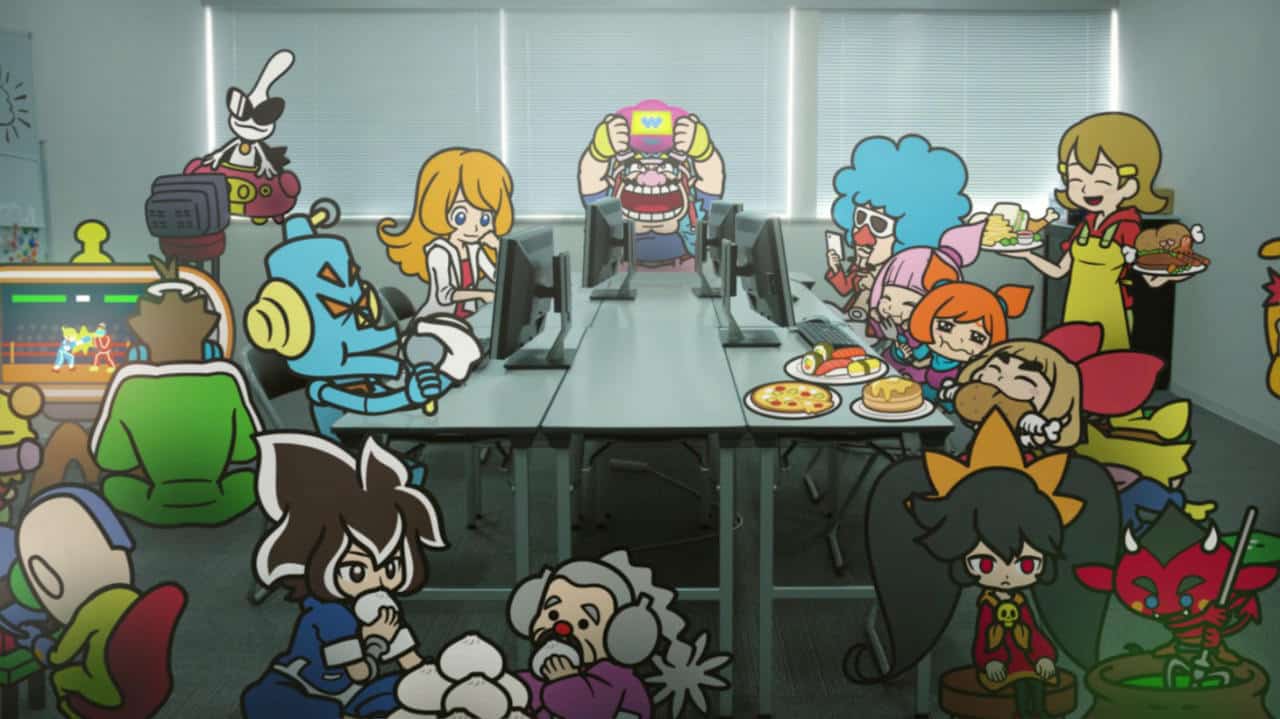 Jimmy can only move by hitting in a certain direction, Mike can only shoot upwards, Wario can fly and bash left and right, Kat can only shoot right while Ana can only shoot left. Do you get what I am saying here? It is cool having these unique characters but they often stumble due to their restricted move set. Thankfully, WarioWare: Get it Together did let me choose a range of characters at the start of each chapter. So it was rarely an issue where I was faced with a game impossible to complete with the character on hand. It also helps that the gameplay is so fast that I never got a chance to worry about failing one game because of this either.

When it comes to the mini-games, there is a lot happening. There are hundreds of these bite-sized games and they don’t last long. The aim is to listen to the objective and just do it. No matter how. It has to be done. Be it covering up cat poop in a litter box, pulling the plug out of a basin to let the water out, plugging a nostril, aiming a statue so it can pee on a fire cooking a piece of meat or inflating a balloon with two pumps. There are so many games to experience and even after I completed the story mode, I had to go back and replay some chapters just to unlock even more. 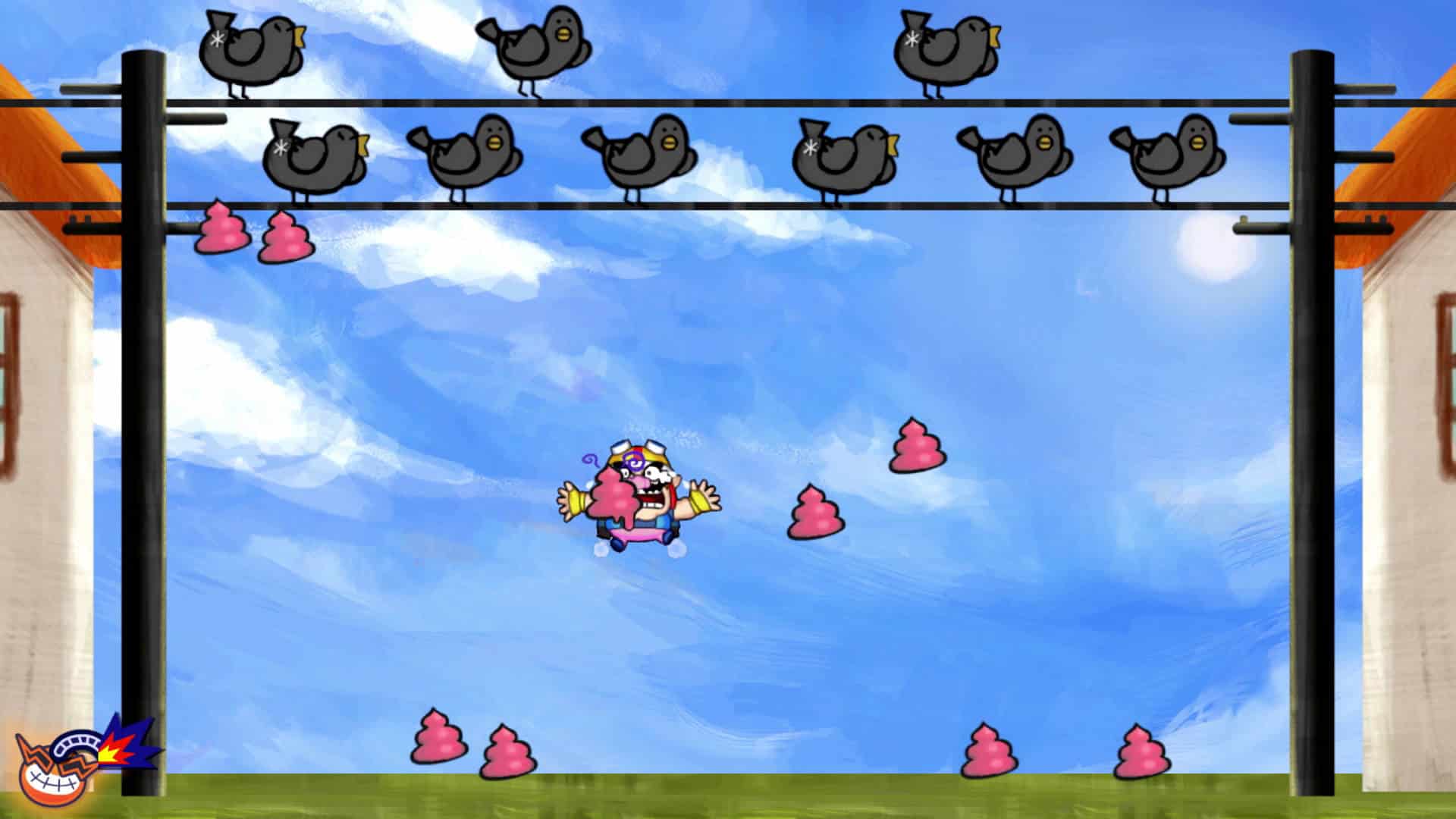 The games are crazy fun and the race to get the objective done makes them even better. Often I would be a split second away from escaping in a helicopter or winding up a robot dog and I would run out of time. I didn’t even have a chance to hate myself before being thrown into the next mini-game. As things were getting even more difficult, the game’s speed ramps up too. So this meant I had to do everything I was doing but at double the speed. The games had less time to complete them so I could fail even faster. The whole experience is rather exhilarating. The fact that literally everything around me sped up too also added this craziness to the visuals that made it even more intense.

As I mentioned before, the game is stylish even though some of the mini-games have a rather rough style to them. The series is known for this and WarioWare: Get it Together is no different. 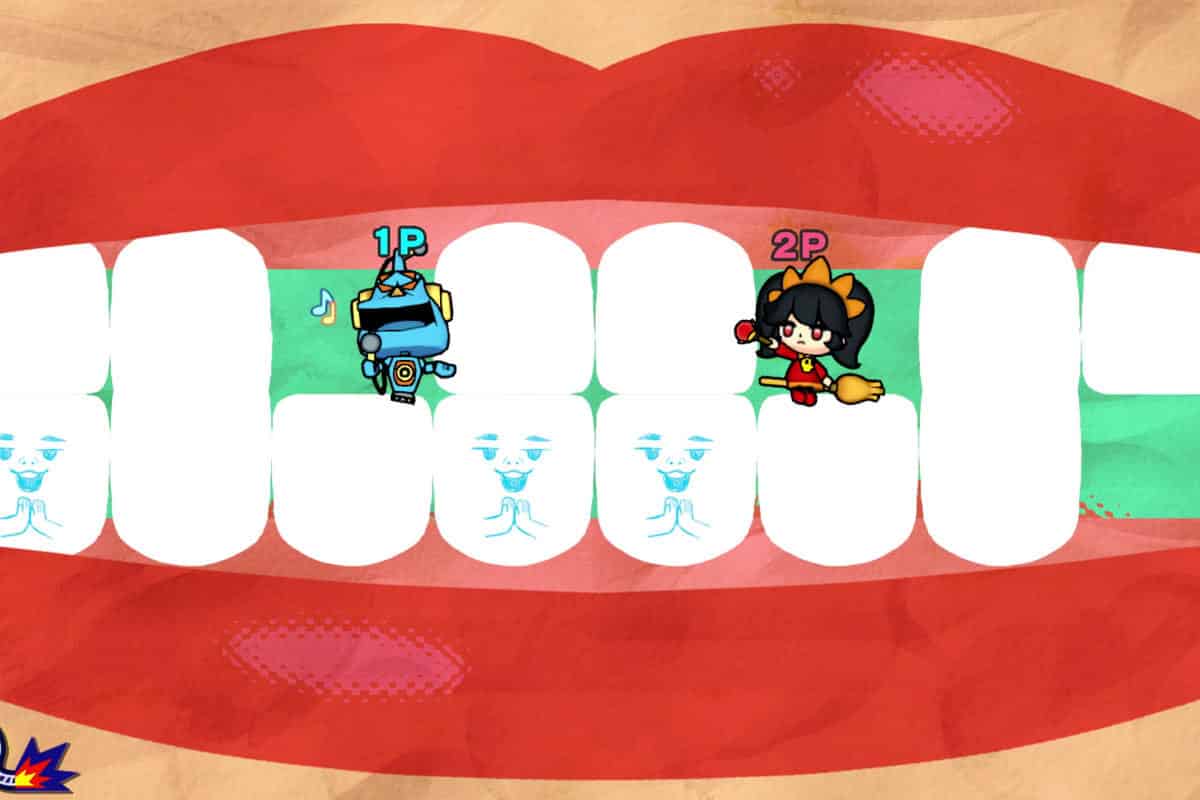 After completing the story mode, WarioWare: Get it Together truly opens up with lots more to do. I had all 20 characters to manage with gifts I purchased and colour shaders I could use to customize their looks and the other game modes created the true party experience. If you’re into party games then the Variety Mode is where you will spend your time. There is a large selection of games that include mini-games in a game and more. Duelius Maximus is a typical PvP mode where players have to simply complete the mini-game faster than their opponent. If you lose, you lose a life and the first one to deplete them all loses the game. This is probably the closest you can get to a classic Wario competitive mode.

We then have Rising Star that sees players complete the same mini-game but whoever contributes the most wins the round. So whoever pulled the plug out of the sink the most or picked up the most treasure etc. It is also a nice approach to the multiplayer experience. Pucker Up is a hockey game where I had to skid around the screen to hit the hockey puck into my opponent’s goal. If I touched the puck last and it went in I got the mini-game to play and if I won, I would get a point. However, my opponent got to shake my screen and even fold it so I could not see what was happening. 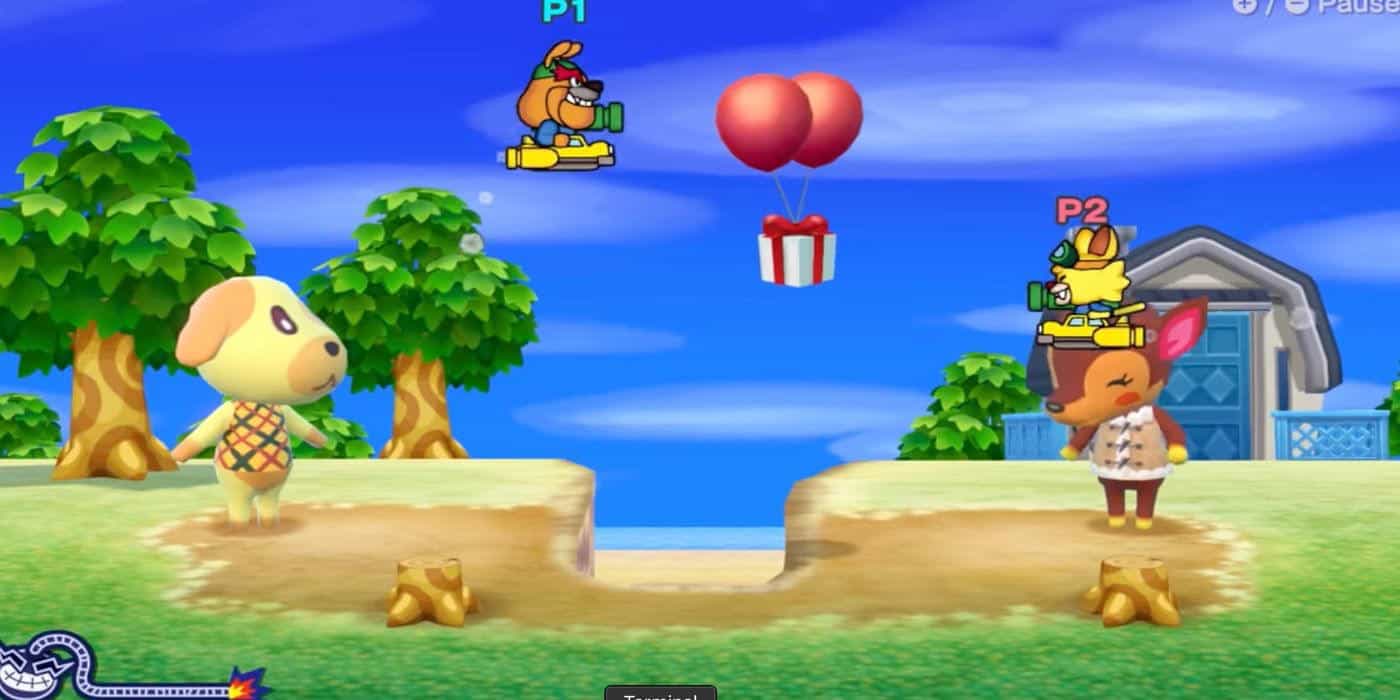 There really is a lot of fun to be had outside of the story mode and Nintendo has found creative ways to incorporate the mini-games into other party-like modes. Of course, you can also play them solo or just replay the story mode to hit higher on the leaderboard. Speaking of which, the Wario Cup is an online ranked or unranked mode that rotates every week. You can participate in tournaments to earn a spot and win coins and prizes. This should give the game a bit more life once you have exhausted everything else.

The aim is to earn coins, buy items in the store and give them to the characters. Once you level them up you earn new shaders and even unlock concept art for each one. It is not a lot but something to aim towards. 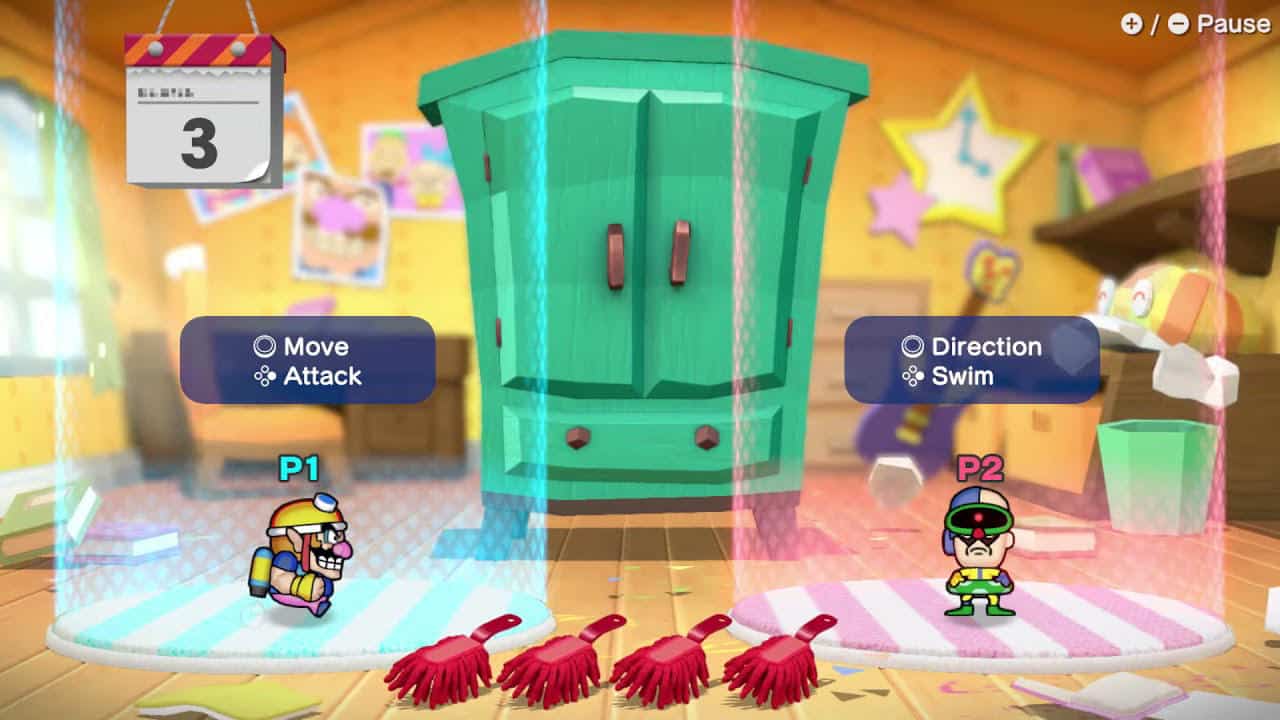 WarioWare: Get it Together Review

I enjoyed my time with WarioWare: Get it Together. The story and presentation took me by surprise. It is charming and has loads of personality. The characters are fun even if they are often annoying in some games. However, the party side of the game is where this experience shines. If you are looking for something to tie you over until the next Mario Party, consider this.

This WarioWare: Get it Together review is based on a code sent to it by Nintendo.

PrevPreviousDays Gone Studio’s PS5 Exclusive Men in Black Leaks Online
NextUnlike Activision and Sony, Ubisoft Wants You To Have Free UpgradesNext
Gaming | Nintendo | WarioWare: Get it Together Review – The Most Random Party Game Around

Gaming | Nintendo | WarioWare: Get it Together Review – The Most Random Party Game Around