The other day Sony dropped off three of their latest smartphones and asked me to test them out. How do I possibly review three whole Xperia phones without the reviews feeling saturated? Well, I don’t. Instead, I decided to put them to the test and look at the new models and see which of them would suit who and why.

We have the Sony Xperia 10, Xperia 10 Plus, and Xperia L3. Each of them is unique in their own way with different price points, cameras, screens and body design. The only thing they all have in common is that they are all Xperia phones that run Sony’s custom Android Xperia UI. Let’s check out the specs of these devices below in our Sony Xperia review. 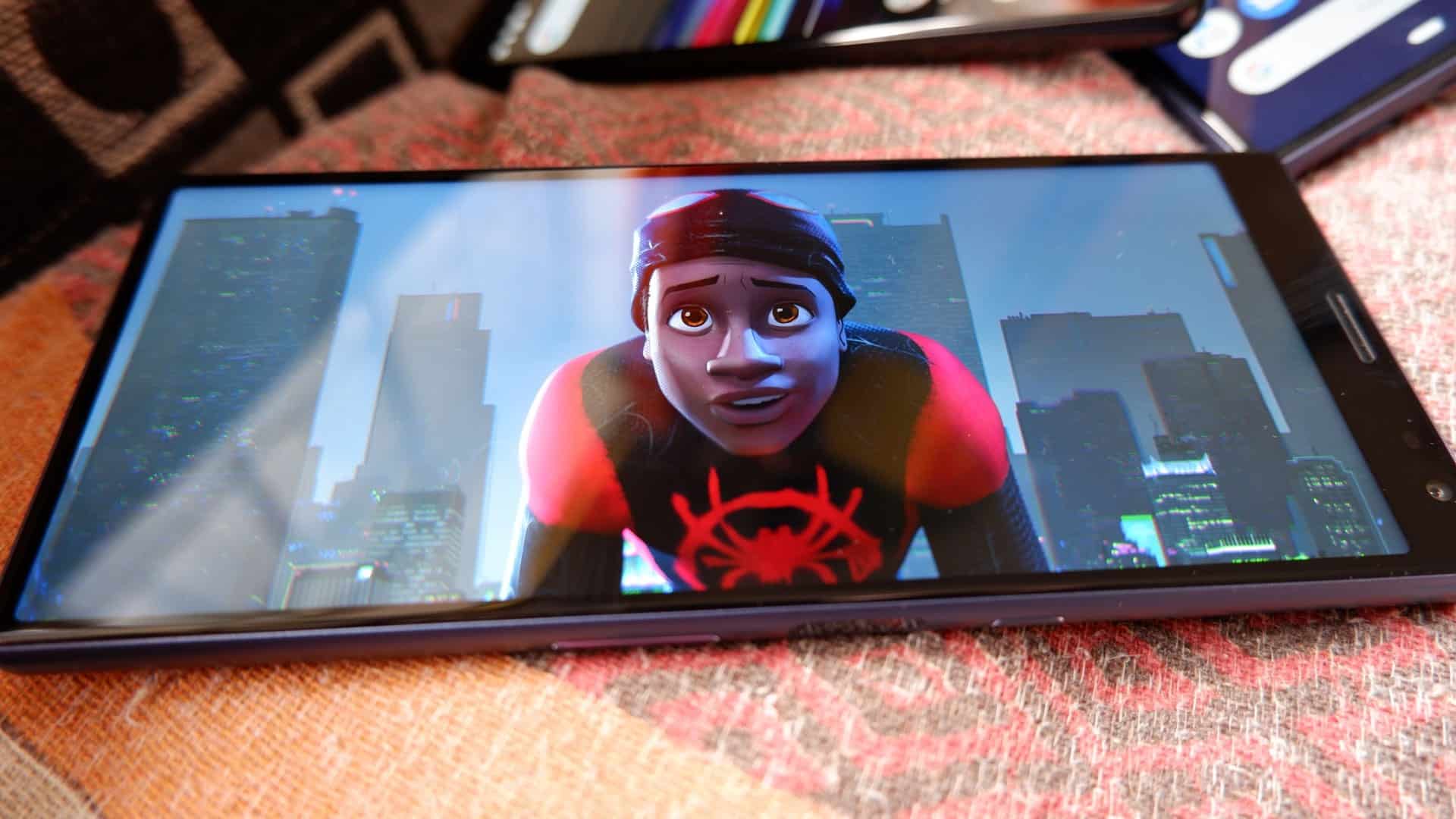 The Sony Xperia range has not changed in quite a while. Even the upcoming Sony Xperia 1 with its new cinema style display still has this block-like design. All three phones make use on an LCD display which is quite a strange move given that every phone on the planet these days (yes, even iPhones) have OLED technology inside them. It is also quite a drawback considering that Sony included OLED tech in their Xperia XZ3 release last year and their 2019 phones, besides the upcoming Xperia 1, use LCD for their screens. 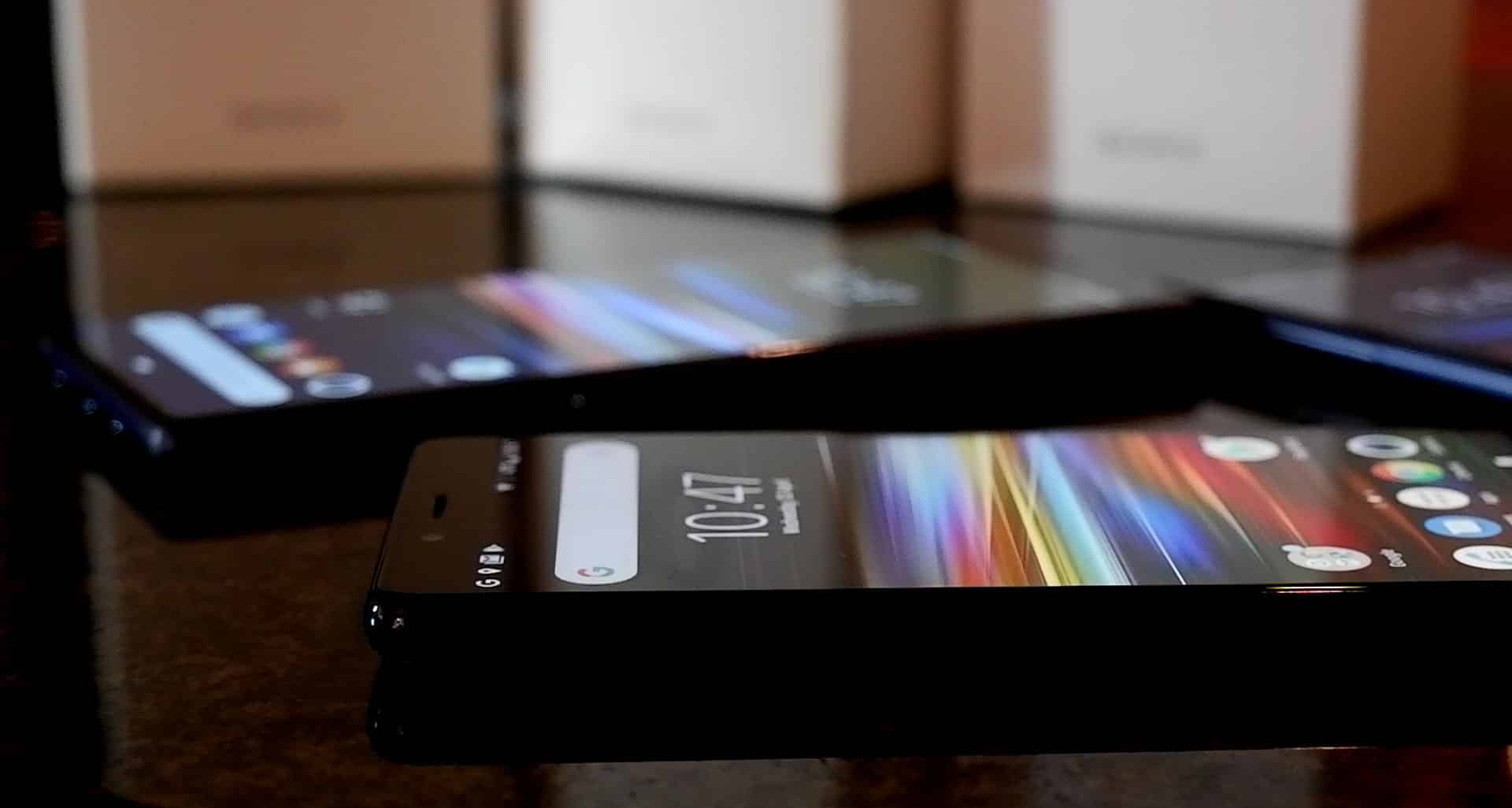 Both the Xperia 10 and Xperia 10 Plus feature this new 21:9 aspect ratio which is Sony’s main selling point for the phones. This means that the two devices are fantastic wide-screen phones great for every type of video content and Sony is not lying here. Netflix looks great and even scrolling through the web displays more than you would usually see. The extra screen space and aspect ratio is one of the best features of the Xperia 10 devices without a doubt,

First off, we have the Xperia L3 that has a glossy body. The back is plastic with quite a reflective shine and the front the two bezels are also just an off-black colour. The grey shade does not help to hide the bezels away. If the device was a complete black then it would have given the front a bigger look but well, it is not. One thing I do like about the L3 is that the camera sensors are flush against the back of the phone compared to the Xperia 10 which stick out a bit. 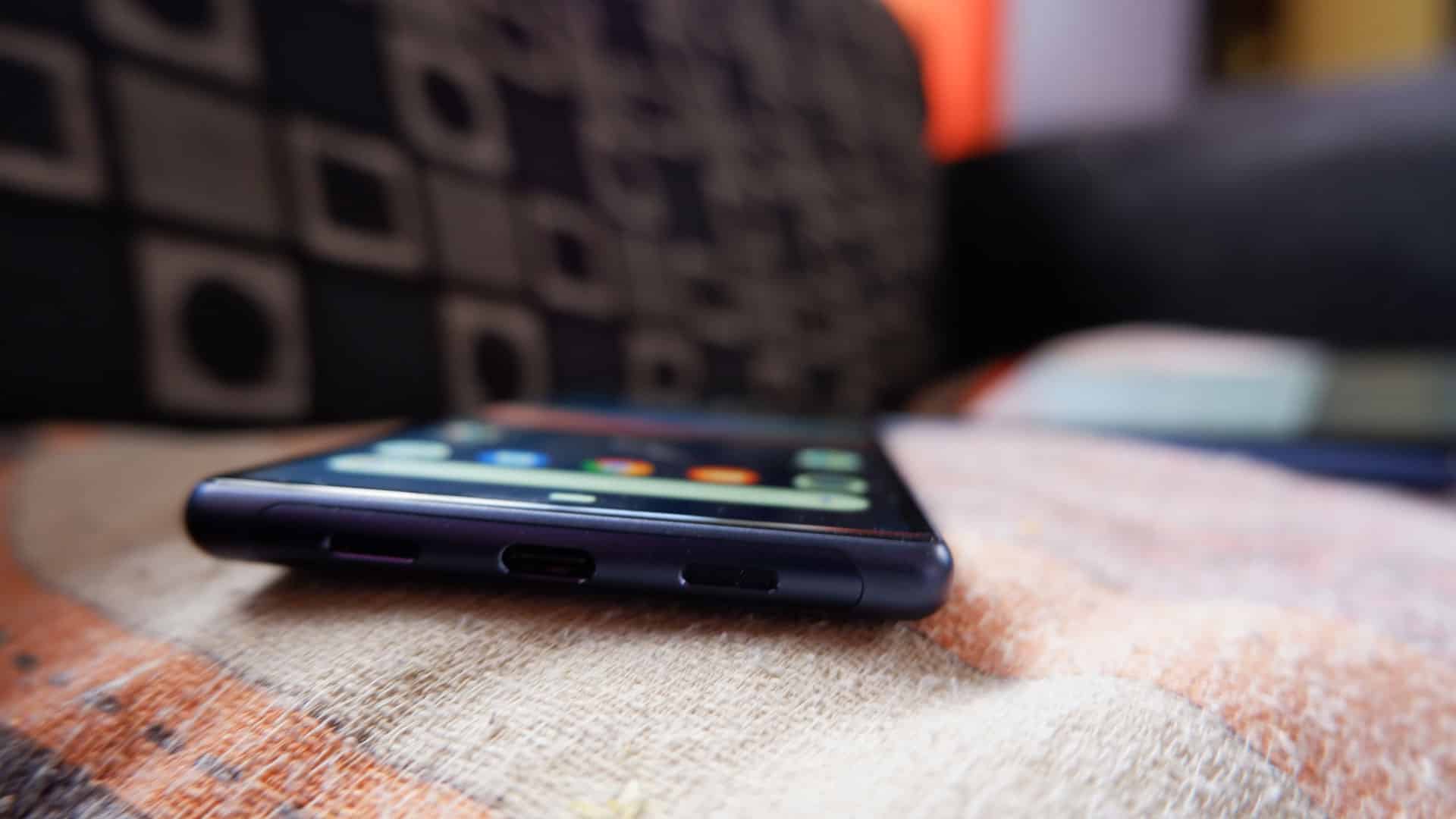 The Xperia 10 and 10 Plus are both aluminium and have a fairly decent grip thanks to the metal material. The bezels on the front are much smaller than the L3 with the bottom of the device having almost no bezel at all. The top bezel is almost completely hidden away too thanks to the darker shade of the rim. All three phones still have quite a high screen-to-body ratio with all of them at around 80%. This is quite a lot of non-screen space considering most flagships are at the high nineties in 2019. 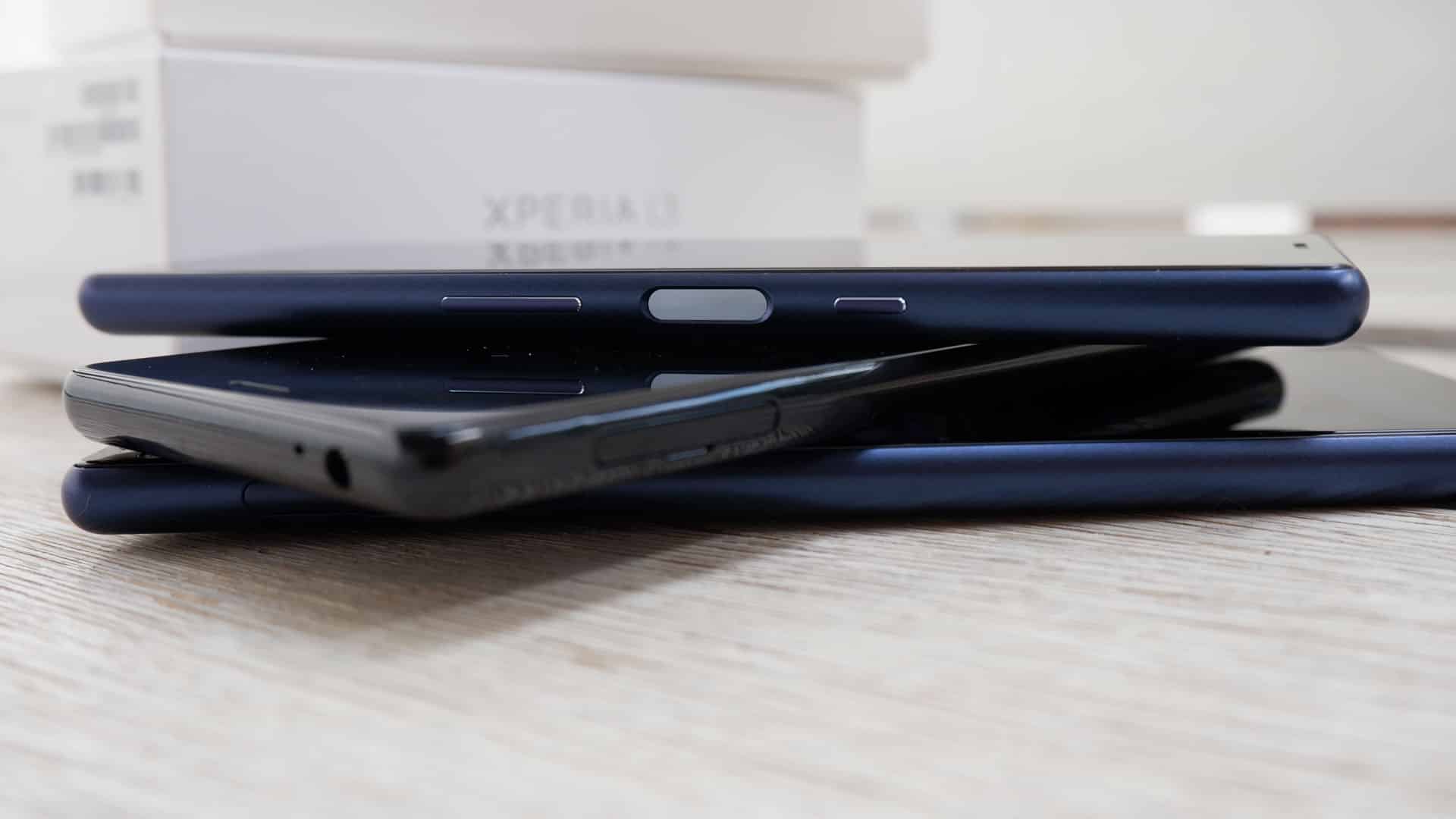 All three devices include a fingerprint scanner on the right-hand side of the phone. Another change from last year’s Xperia L3 which had the sensor at the back. The volume controller is also underneath this sensor and has a strange design to it. Instead of clearly indicating an up and down button, it is one size so I often pressed it in the middle, changing the volume by mistake.

In terms of displays, all three devices manage to deliver a crisp, vivid and clear picture. They are bright and the colours are really great. The Xperia 10 and 10 Plus have the same resolution at 1080×2520 with the Xperia 10 having a higher pixel density of 457ppi. The Xperia 10 Plus sits at 422ppi. As for the Xperia L3, well it is the baby phone so it too has a much lower resolution at 720×1440 with a 282ppi. It may have a lower resolution but the overall display does not let you down. You can see it is a 720p display but it holds its own pretty well. 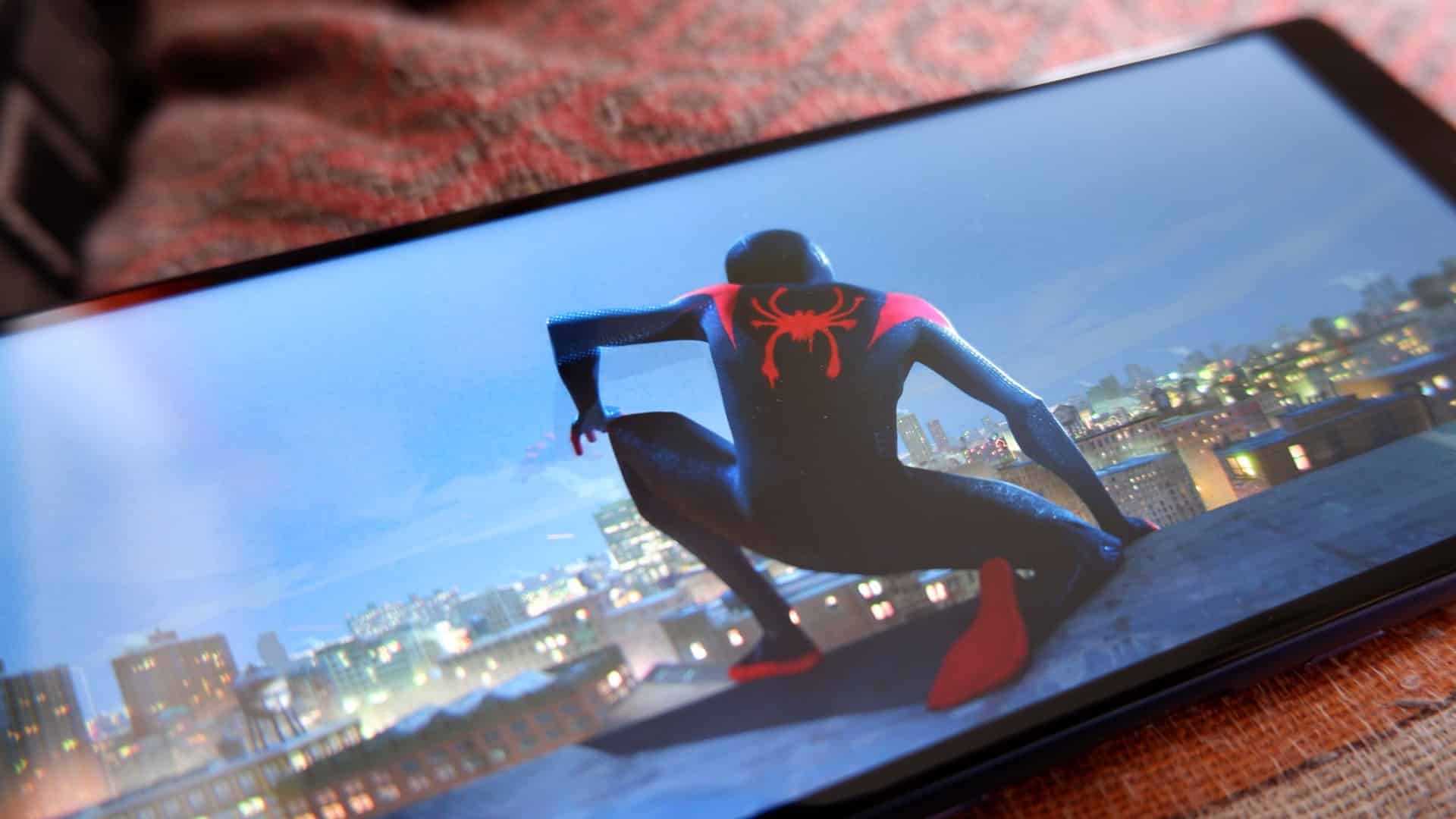 Some other things to note are the speakers on each phone. They don’t have stereo speakers so the top speaker vent is simply for calls. When playing videos, the sound does not come out of the top. For the size of these speaker grills, you would expect there to be sound but that is not the case. Quality is okay, and that is all I can really say. The Xperia L3 lacks that quality kick and the other two devices are pretty mediocre at best. After iPhone XS stereo widening, the difference in sound quality was night and day. 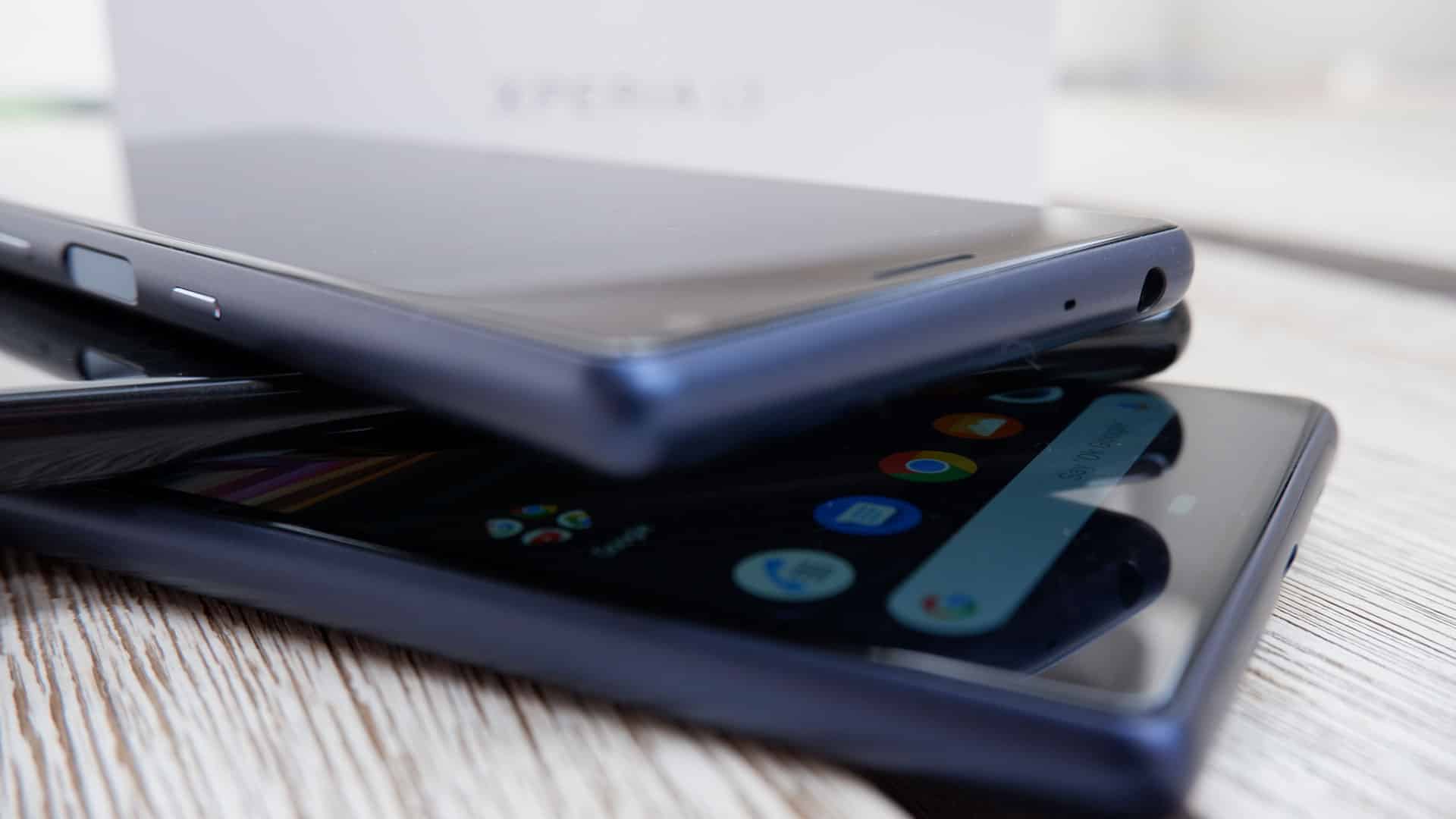 When it comes to daily use of the devices, they all hold up quite well. Multitasking, some light gaming and browsing of the net was fast and fluid. Only the Xperia L3 had a few jitters here and there but this is most likely due to smaller CPU. Geekbench tests showed the three devices had various scores to compare with the Xperia 10 Plus on the top of the list with the highest scores across the board. The differences between the two are quite substantial and the Xperia 10 Plus even took half the time to run these tests compared to the other two devices. As for the Xperia L3, as you can see the results are a lot lower than the other two but still pretty decent.

Now into the camera, or cameras considering all three devices have more than one. First off we have the Xperia 10 which has a dual 13-megapixel and 5 megapixel back camera. The two lenses together deliver great portrait photos with decent bokeh but the cameras are not industry changes at all. Photos look crisp in good light and even regular light. However, in low light things get a bit dark, literally. Photos are noisy and full of grain. There is also no OIS which results in a blurred photo at the slightest movement of your hand. 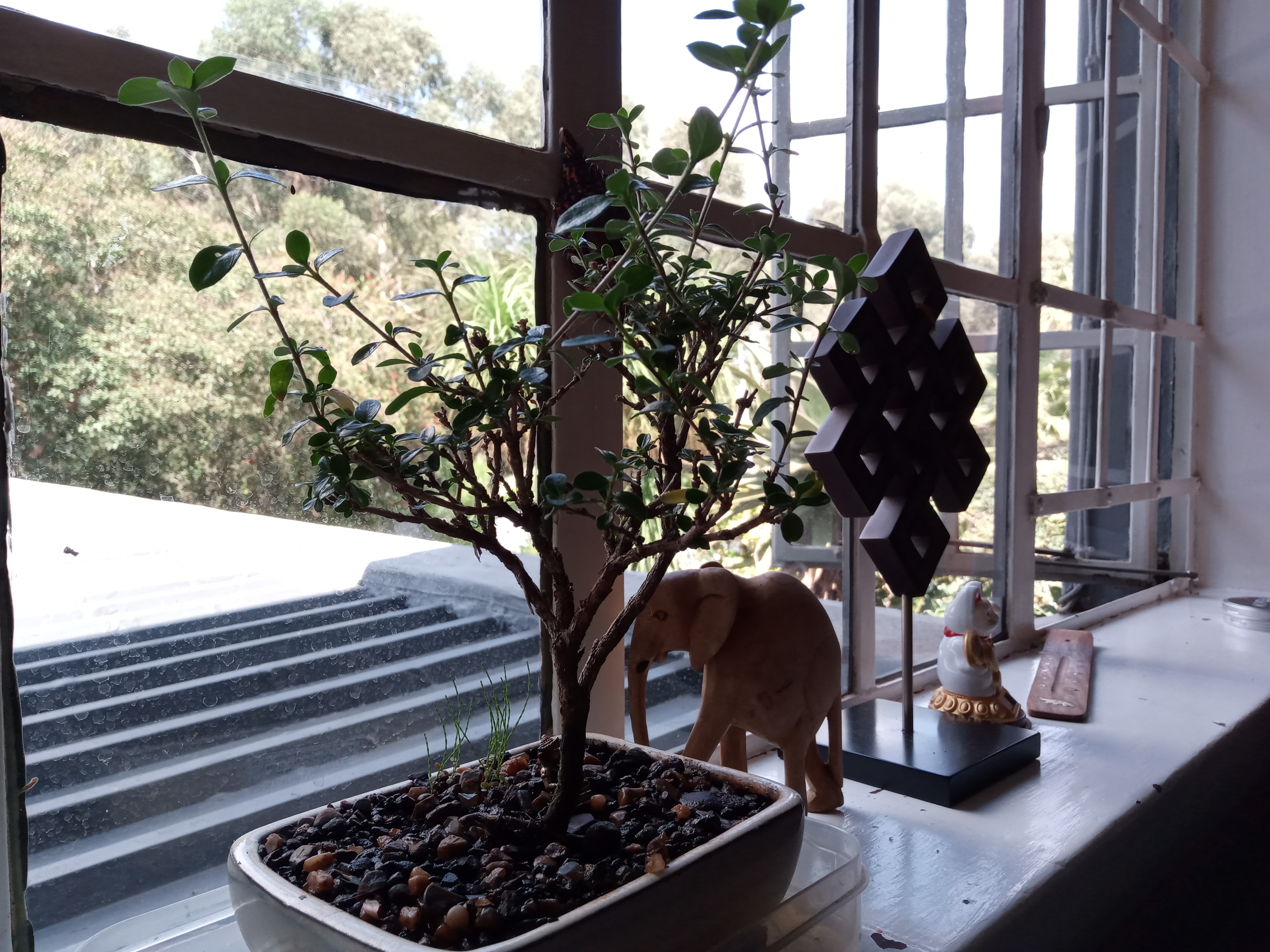 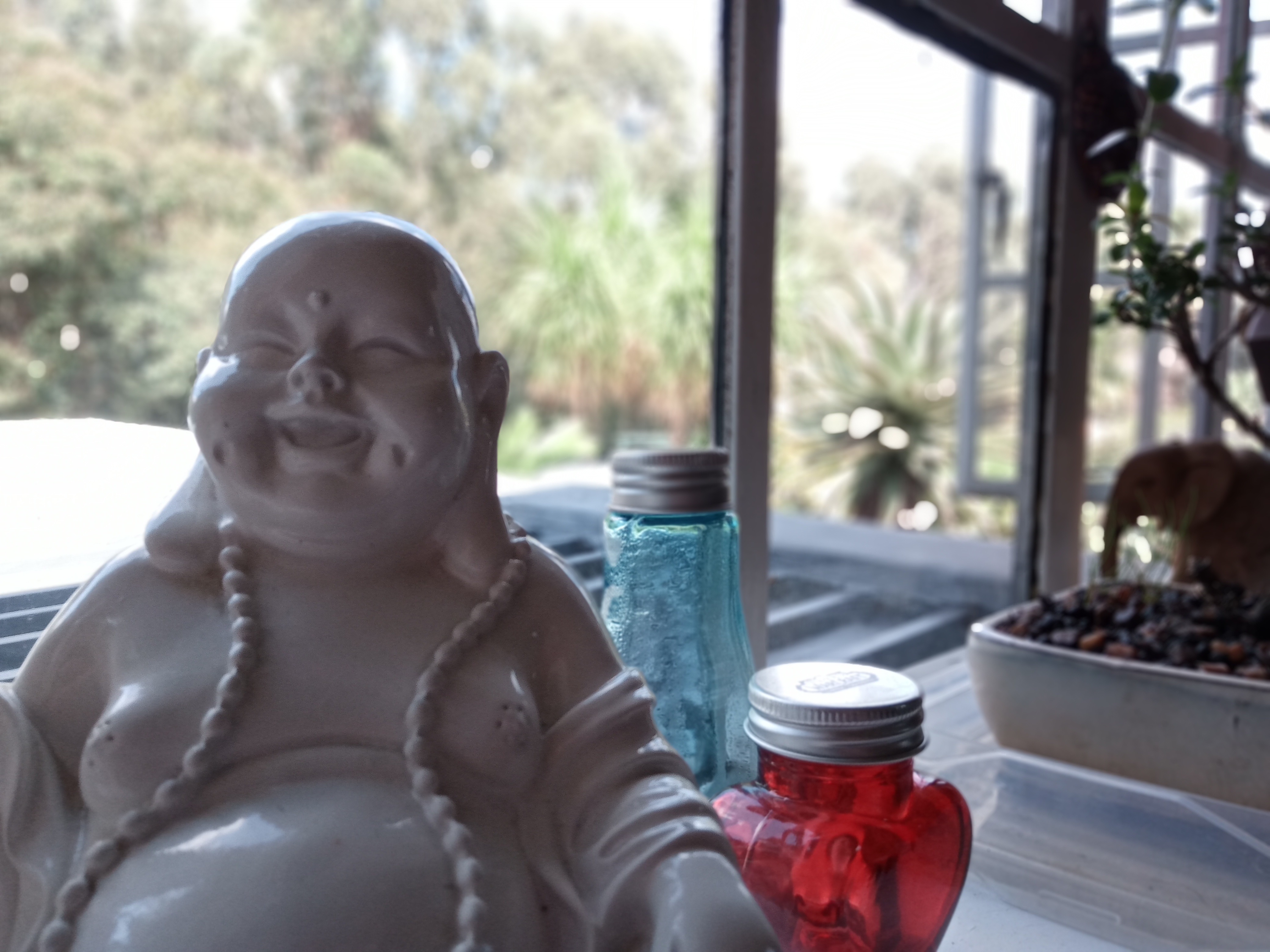 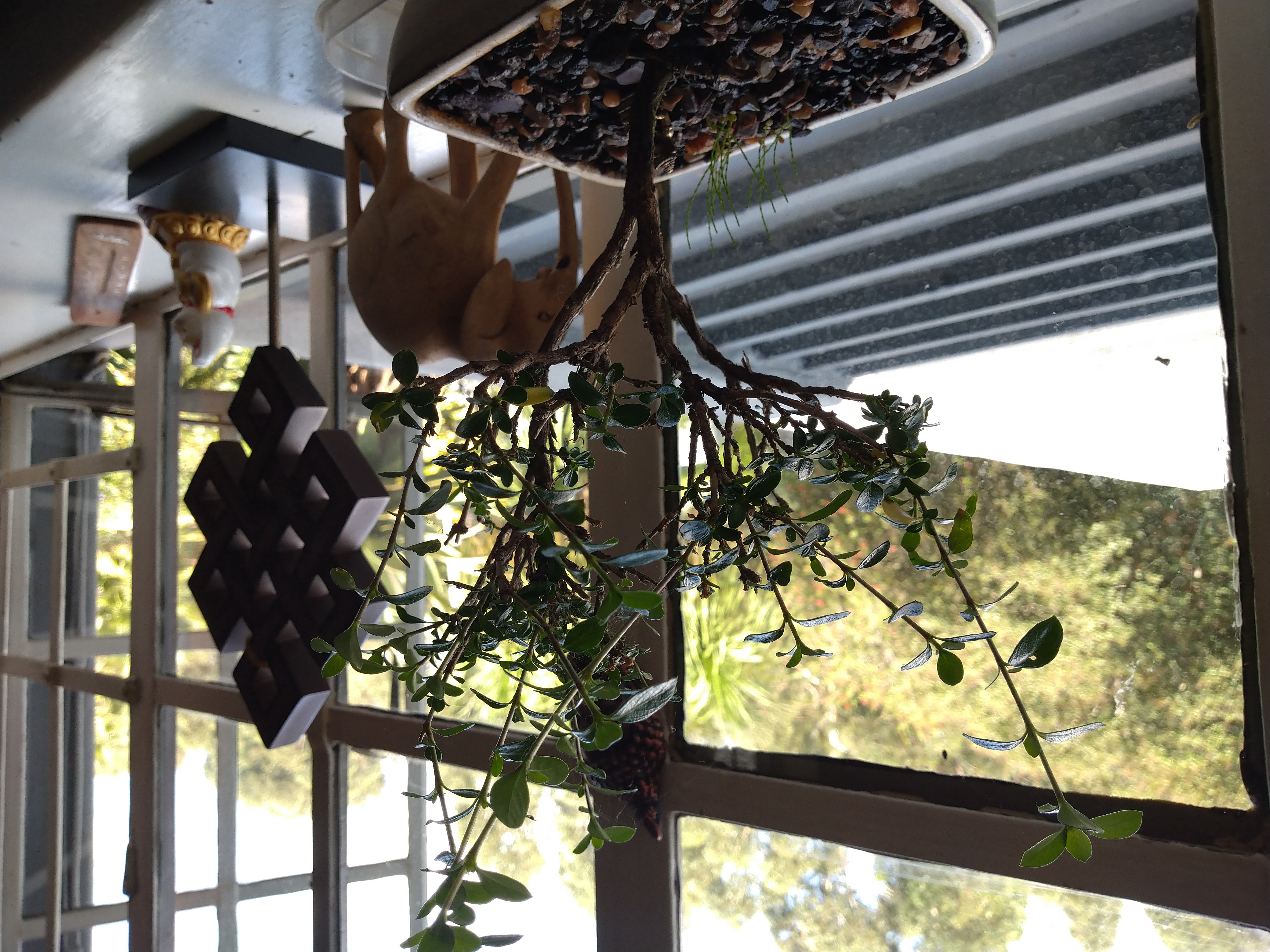 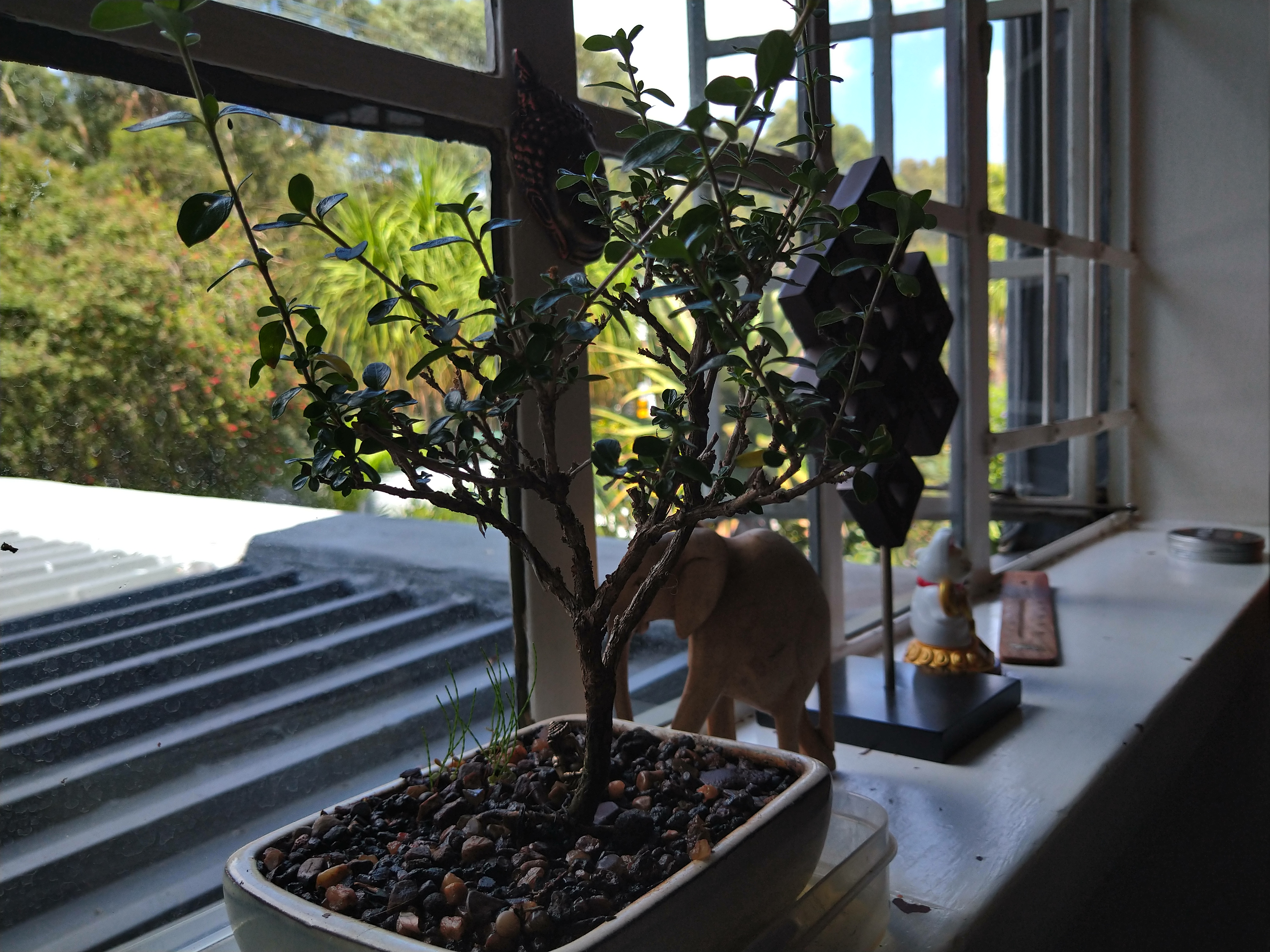 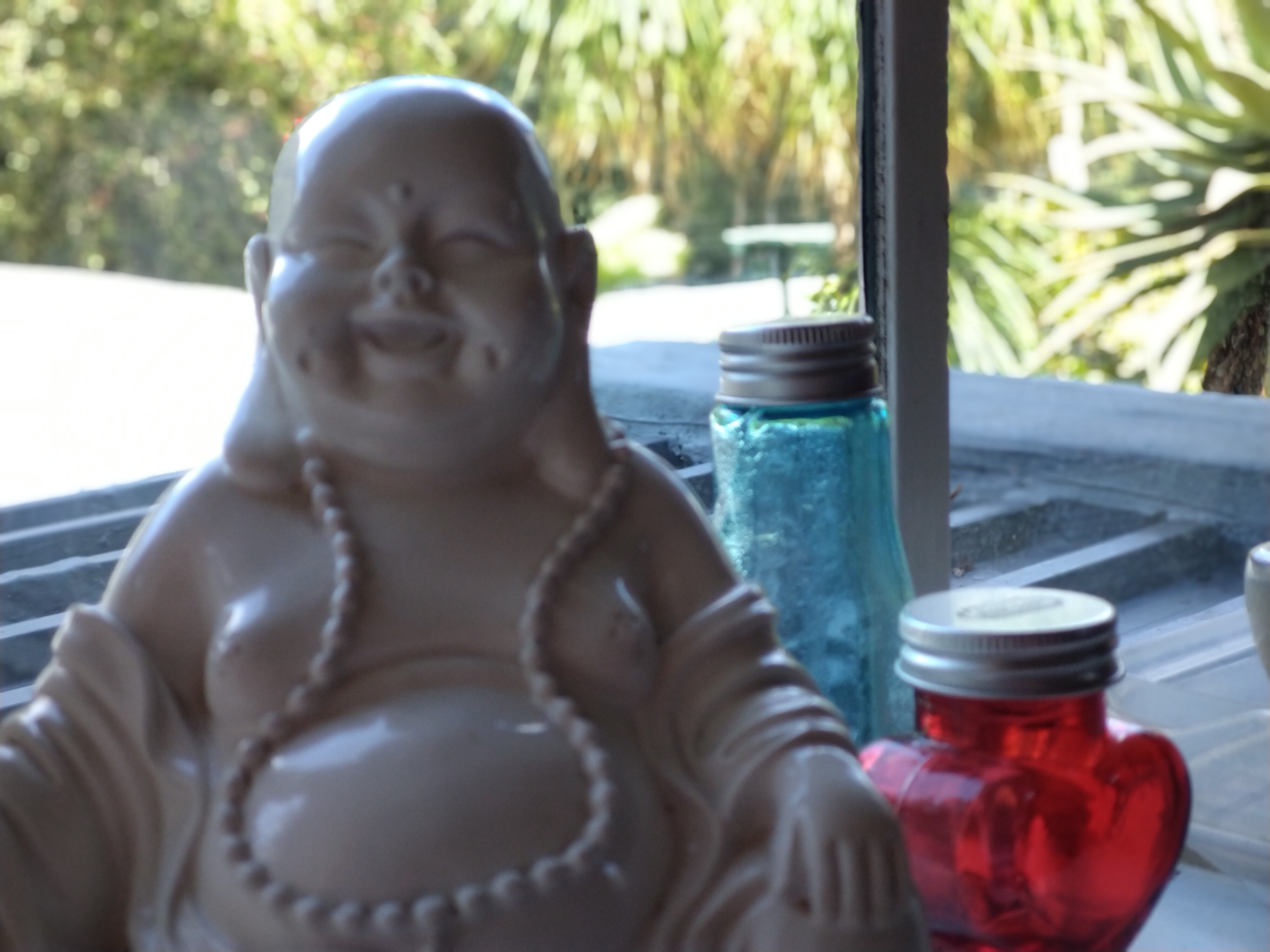 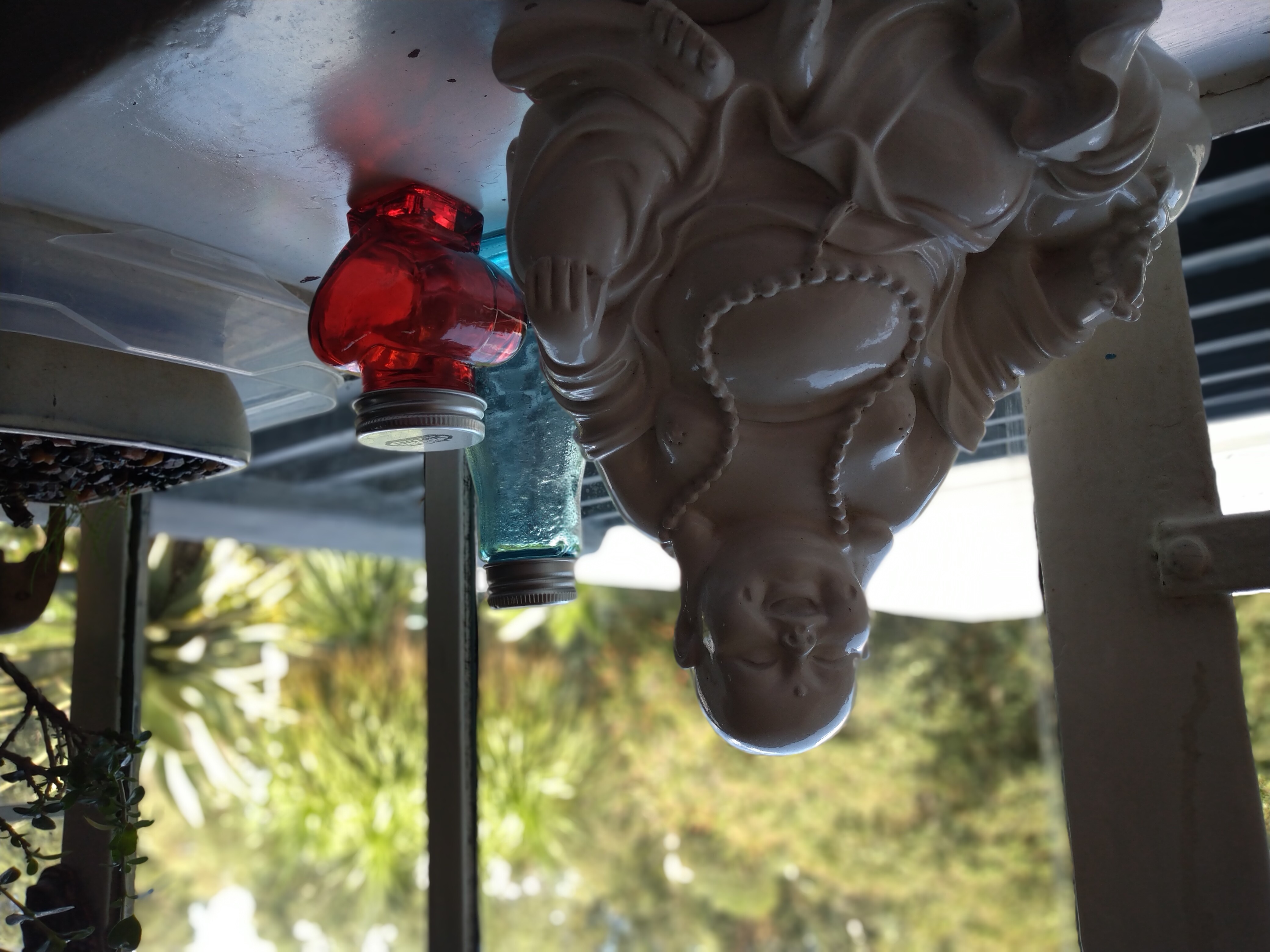 The Xperia 10 Plus also suffers from the same issues. While it is a decent regular light camera, low light is just pretty meh and just like the Xperia 10, the slow shutter speed brings down the overall camera experience. However, the Xperia 10 Plus does have an overall better camera than the smaller model. Colours are brighter and the overall quality is higher too.

Then we have the Xperia L3 which, considering the price, has a fantastic camera. Although it has a few issues like the lack of dynamic range, it is a great camera for the device’s asking price.

The battery life on all three devices is decent. Nine hours of video, an all-day charge across the board. All three devices include adaptive fast charge but don’t come with a fast charger in the box. They all also use USB Type-C which is a win for the adapter. You won’t feel cheated by the battery life in any of these devices at all as they all deliver at least a full day charge with the Xperia 10 being a little longer thanks to its extra battery capacity.

The overall experience of the Xperia range I tested proved one thing. If you want the best, you will need to pay for the Xperia 10 Plus as its camera, CPU, battery life and performance was just better. However, the other two devices make great value for money. The Xperia L3 is as basic at it gets but for, under R5000, you can’t go wrong.

The Xperia 10, however, felt left out as if you want budget, you would go for the Xperia L3 and if you wanted the best, the Xperia 10 Plus so why would anyone want the normal 10? It kind of does not have a spot when you compared this lineup unless you budget R6,499 for a phone and that is the one you want.

Overall, the Xperia range I tested was great and they hold up quite well, The 21:9 aspect ratio of the 10 and 10 Plus deliver a decent viewing experience but when the new 4K OLED Xperia 1 rolls around, these might be outdated.

PrevPreviousNetflix Renews The Umbrella Academy For Season 2 and No One is Surprised
NextThe Twilight Zone Makes a Triumphant ReturnNext
Gaming | Mobile | We Compare Sony’s 2019 Xperia 10, 10 Plus and L3 Smartphones – Which is the Best Value for Money?