We Review The ‘Aston Martin’ of ASUS Gaming PCs

When the folks at Republic of Gamers, the gaming subsidiary of ASUS, contacted us and asked us if we were keen to try out one of their latest PBA (Powered by ASUS) AMD gaming builds, we didn’t just jump, we leapt at the opportunity. Just picture the iconic moment when Jonty Rhodes ran out Inzamam-ul-Haq in the 1992 Cricket World Cup).

A PBA is basically a pre-built, high-performing gaming machine with ROG’s stamp of approval on it. So you know every part is optimized to work well together for the best graphics, frames and visuals you can get. Not to mention the RGB effects you can play around with and customize to your liking. Let’s dive in to check the components and my thoughts on using this unit for two weeks. 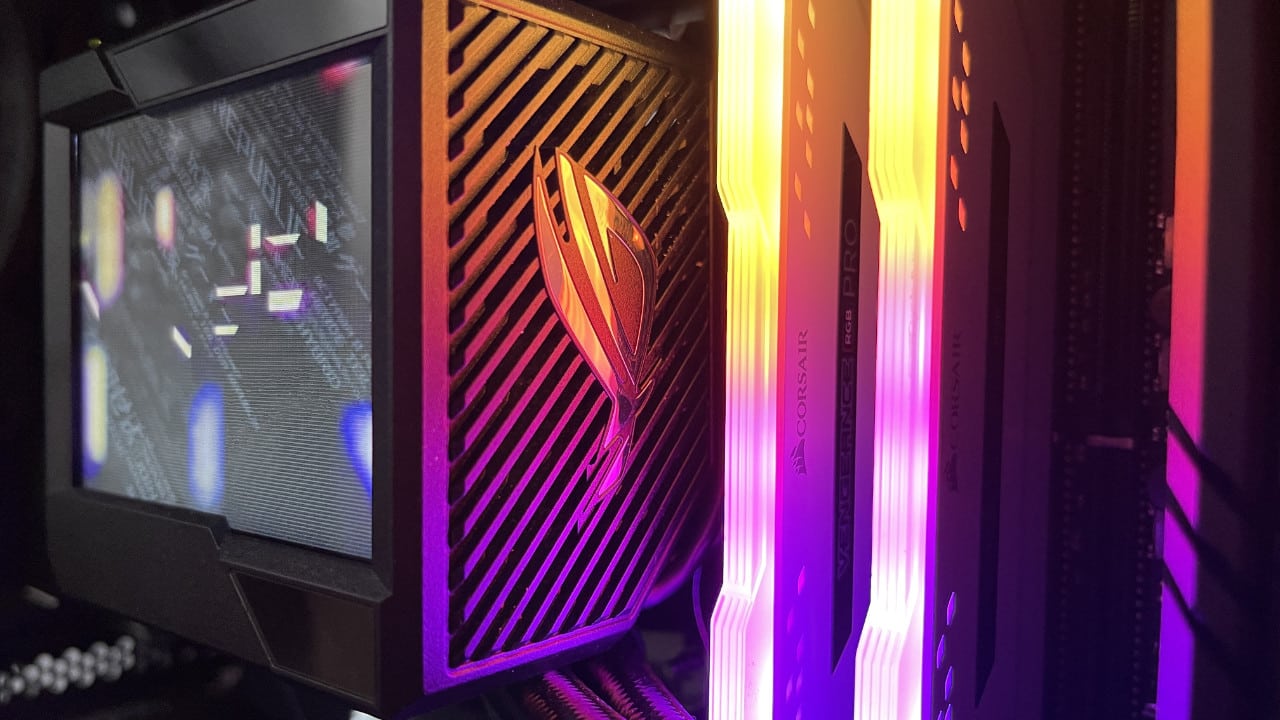 Let’s start off with the case containing this beast – the ROG Strix Helios. Although ASUS and ROG are more well known for their hardware, the ROG Strix Helios is packed with the most features I have ever seen on a case. A chassis designed for ease of use, fantastic cable management and good storage options. It also downright looks terrific. The side and front panels have been fitted with tempered glass.

The RGB ROG styling is quite noticeable, combined with a configurable RGB front panel logo you can tag any colour design that suits you the best. This is thanks to an RGB lighting controller is housed inside the chassis. One of the features I loved about the case is the velcro strap laced over the top panel, ostensibly an “ergonomic and stylish” handle for carrying the system but it’s worth noting that the case is 18 kg’s on its own so not ideal for moving around too much!

Here are the official specs of this beastly machine 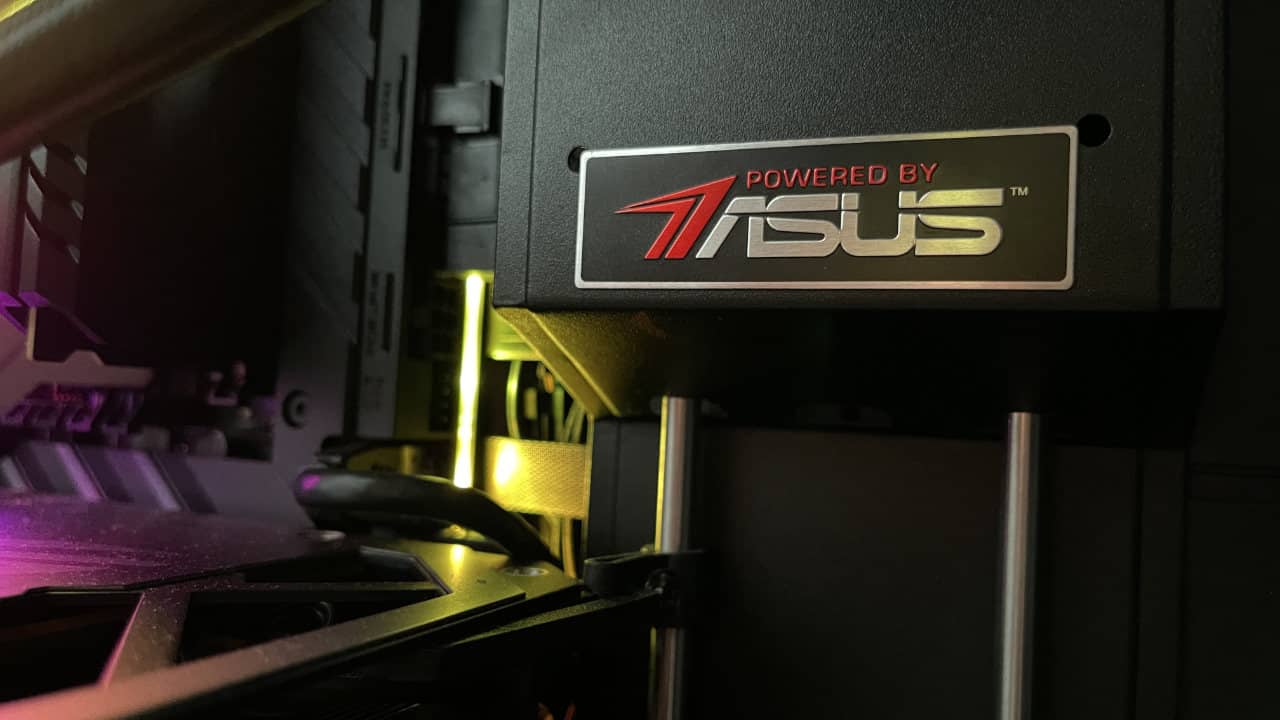 Some noticeable features for the motherboard include support for 2000, 3000 and 5000 AMD chipsets, the ability to install up to 128GB of DDR4 RAM at speeds of up to 5GHz (2.5GHz x2), two PCIe 4.0 x16 slots with full support for NVIDIA and AMD dual-GPU configurations. In addition, it comes with five M.2 slots (three on the board and two on the expansion card), three of which are capable of running at PCIe 4.0 speeds, 2.5Gb and 10Gb LAN connections for more network bandwidth as well as WiFi 6 technology. This is a game-changer for me personally with a desktop PC. The GPU (Graphics Processing Unit) is one of the key features of any solid gaming desktop, and the ASUS ROG STRIX Radeon RX 6800 OC graphics card doesn’t disappoint. While its big brothers, the RX 6800 XT and RX 6900 XT excels in 4k gaming or content viewing, the RX 6800 has placed itself quite nicely in terms of performance and price. It can run at maxed-out gaming performance in 1440p while still able to handle 4k quite nicely.

The RX 6800 is based on AMD’s new RDNA2 graphics architecture which can handle DirectX 12 Ultimate, which includes real-time raytracing standardized under DirectX Raytracing. This adds a new level of graphics realism to games through effects like reflections, shadows, and global illumination at real-time frame rates. I had no issues whatsoever playing the latest game titles at well over 144 FPS on the highest setting with 1440p. Every game ran smoothly as butter without any overheating issues. The ASUS ROG STRIX Radeon RX 6800 OC is also visually stunning to look at with full RGB on the side that adds a nice touch to the aesthetics of the case. 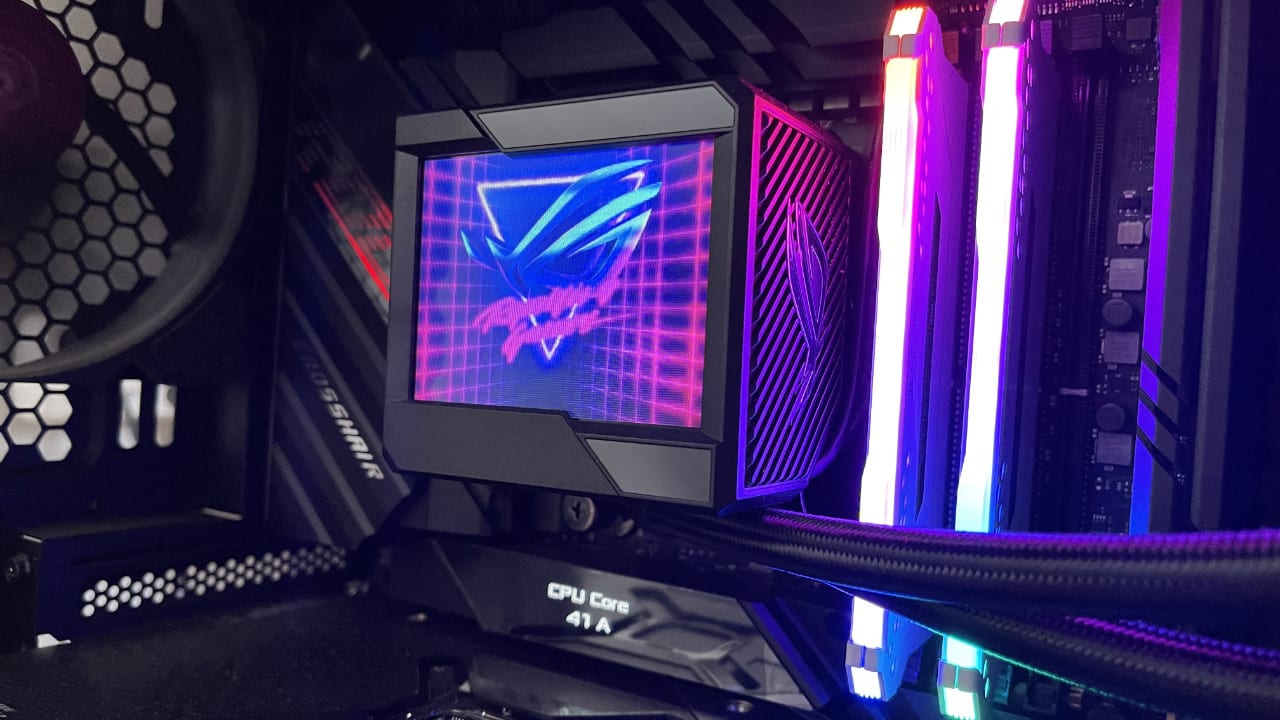 I ran some benchmarks on the machine across a range of games and tools. Everything performed incredibly well. The 3D Mark results spoke for themselves pumping out some extremely high points across Fire Strike Ultra. A Graphics Score of 11k is only possible on a rig this powerful. The PC Mark 10 tests, on the other hand, focus less on the GPU and more on how the system can operate with mass applications running, web browsing in the background and photo editing. This score represents a high-tier machine great for content creators and those with a heavy workflow.

As for the games, the scores show that this rig is capable of pushing most modern games to the 60FPS mark while in 4K. Shadow of the Tomb Raider is still one of the most demanding games on the market. Maxing out its settings and enabling raytracing resulted in a 58-60FPS benchmark in 4K. The scores below are a testament to what this machine is capable of. 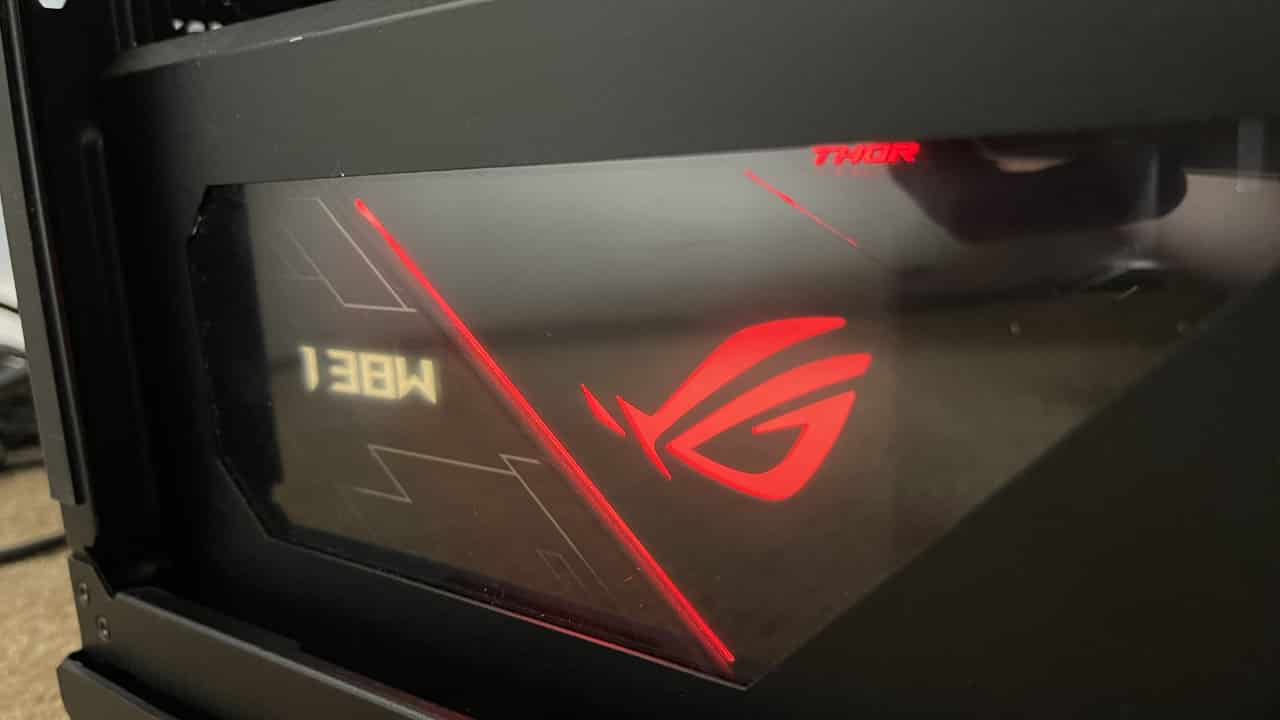 You can also always tweak your game settings to your style. If you prefer a higher refresh rate, this machine is definitely capable of doing that. You may need to drop a few settings here and there or perhaps the resolution down to 1440p to surpass the 60FPS cap in some games. You’ll get 120FPS in some instances and even though the game is running at 1440p, it will still look pretty incredible.

Shadow of the Tomb Raider

Finally, the Asus ROG RYUJIN II 360 CPU Cooler and ASUS THOR 850W Platinum ATX Power Supply. The Ryujin II is an AIO (All in One) cooler that boasts a 3.5″ full-colour LCD screen that can be fully customized through Armory Crate. Armory Crate lets you easily play around with the display contents. You’ll be able to show a number of stats for the PC, as well as time, dates etc but I really liked the option to play GIFs on the panel. The Rjujin II is painted in a matte black finish with ROG branding on the sides. I found this to be a really nice touch. I never had a problem with the fan sound on the Ryujin II and cooling for the CPU had some excellent results, even when playing Resident Evil: Village on max settings at 1440p. The ASUS Thor 850W PSU (power supply unit) was another eye-catching and unique component that came with this rig. It’s the first PSU to feature an integrated OLED panel, offering the user a real-time display of the power draw so you can see how much juice your rig is using at any given time. Definitely an impressive feature! It’s an extreme performance PSU that screams quality and styling that was built for a gaming desktop.

Gaming has grown quite considerably over the last few years, billions of US $’s are pumped into titles such as Call of Duty, Resident Evil, Grand Theft Auto, Assassins Creed, Cyberpunk and the likes. They all break sales records upon release which is a testament to how many people game and what price they will play for a great title. On top of this, gaming is no longer limited by age or sex. We also can’t stereotype a gamer anymore. It is a beautiful thing in my opinion. 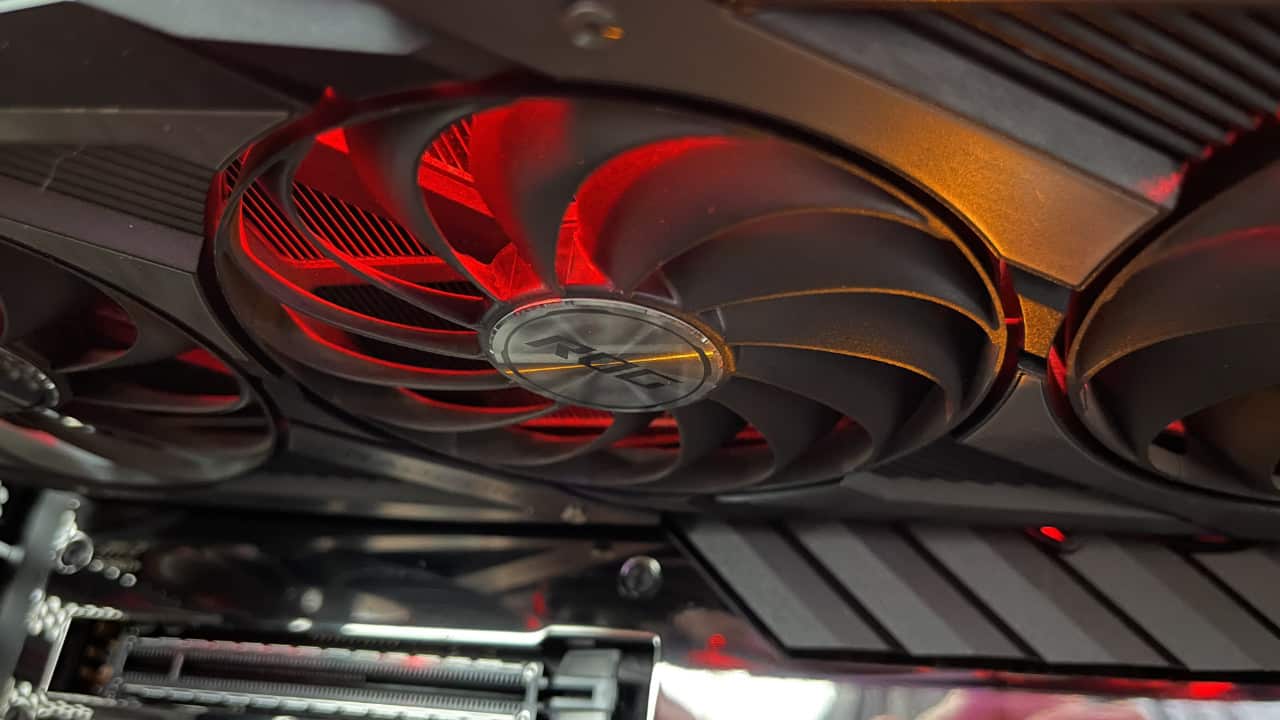 Gaming on a console is great, but gaming on a PC and specifically a ROG AMD PBA unit takes it to the next level. You are getting max performance on anything you throw at it. Given, one of these units is not cheap. It’s going to most likely set you back well over R50,000 on the lower end of the spectrum, depending on how you customize it, but it’s going to give you 5 years plus of playing the latest game titles.

These titles will also run on high settings without any stuttering or visual compromise. On top of it, its cool AF and it’s not so bad when you consider how many hours of entertainment it’s going to deliver over the coming years. Having said this, the ROG PBA units are not just for gamers, they ideal for content creators, video editors or any professional who requires a lot of power and performance in their rig to perform their tasks effectively and efficiently.

It was emotional having to part with the PBA machine, I enjoyed just about every aspect of using it, but I couldn’t help but think that the target audience for one of these machines is geared towards your diehard ROG fans with deep pockets.

This Powered by ASUS gaming PC review is based on a pre-built unit. You can purchase these parts separately from Evetech