This post is for those of you who might be familiar with the name Dune but not necessarily anything more. I’ll take you through the basic gist of the story, some of the terms you’ll hear in the movie, and what order to read the books and short stories in if you watch the movie and need more (it will happen, trust me).

First things first, Dune is the name given to a genuinely monstrous series of science-fiction books, first published in 1965 by Frank Herbert and later continued by authors Brian Herbert and Kevin J. Anderson. 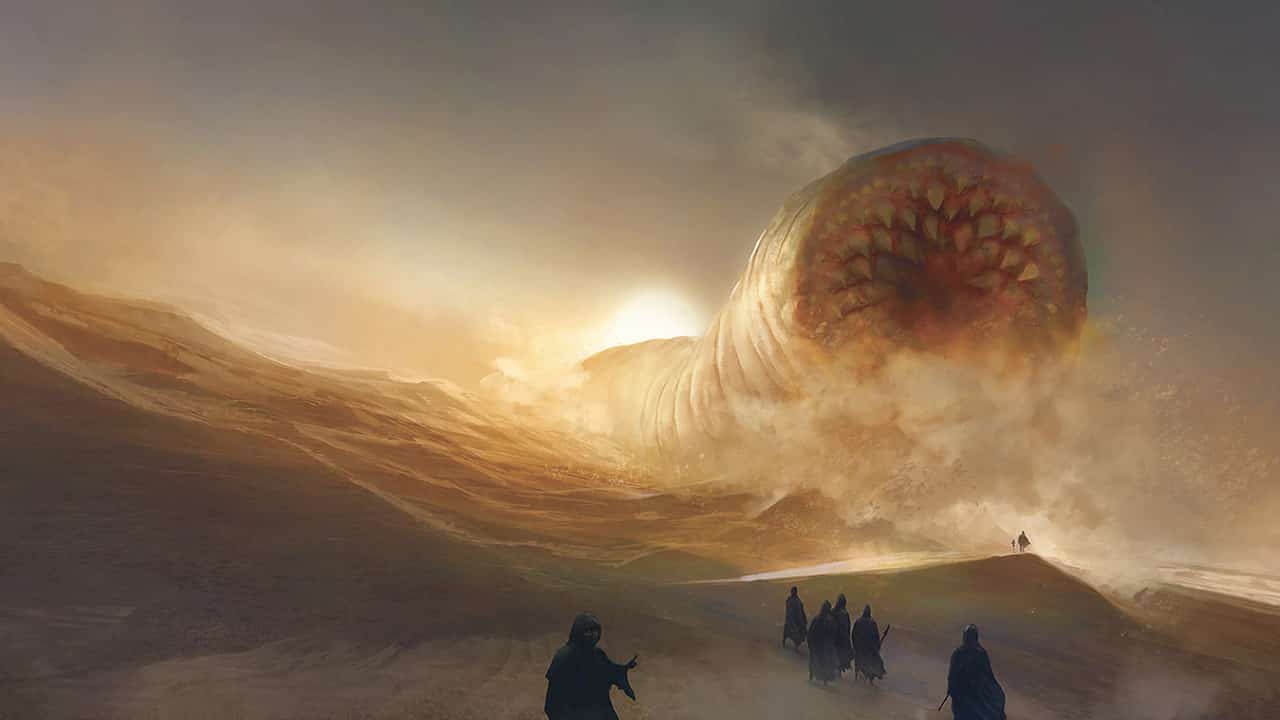 A very watered down and simplistic explanation of Dune would be as follows: Dune is set roughly 20,000 years in the future, and all in all, the story spans 7500 years, give or take. The story revolves around all the political and religious strife between three Nobel houses: House Corrino, House Atreides and House Harkonnen.

Each house is battling to have rulership over the planet Dune, otherwise known as Arrakis. Arrakis is the only known source of Melange, or “The Spice”, a drug found in the sands of Dune. Melange is required for any and all space travel, something each house relies on and is also used to enhance mental abilities and extend life. Thus Dune is seen as a commodity that everyone seeks to have as their own.

It is easier to break things down into separate series when it comes to the books, starting with the original series and book written by Frank Herbert, Dune. 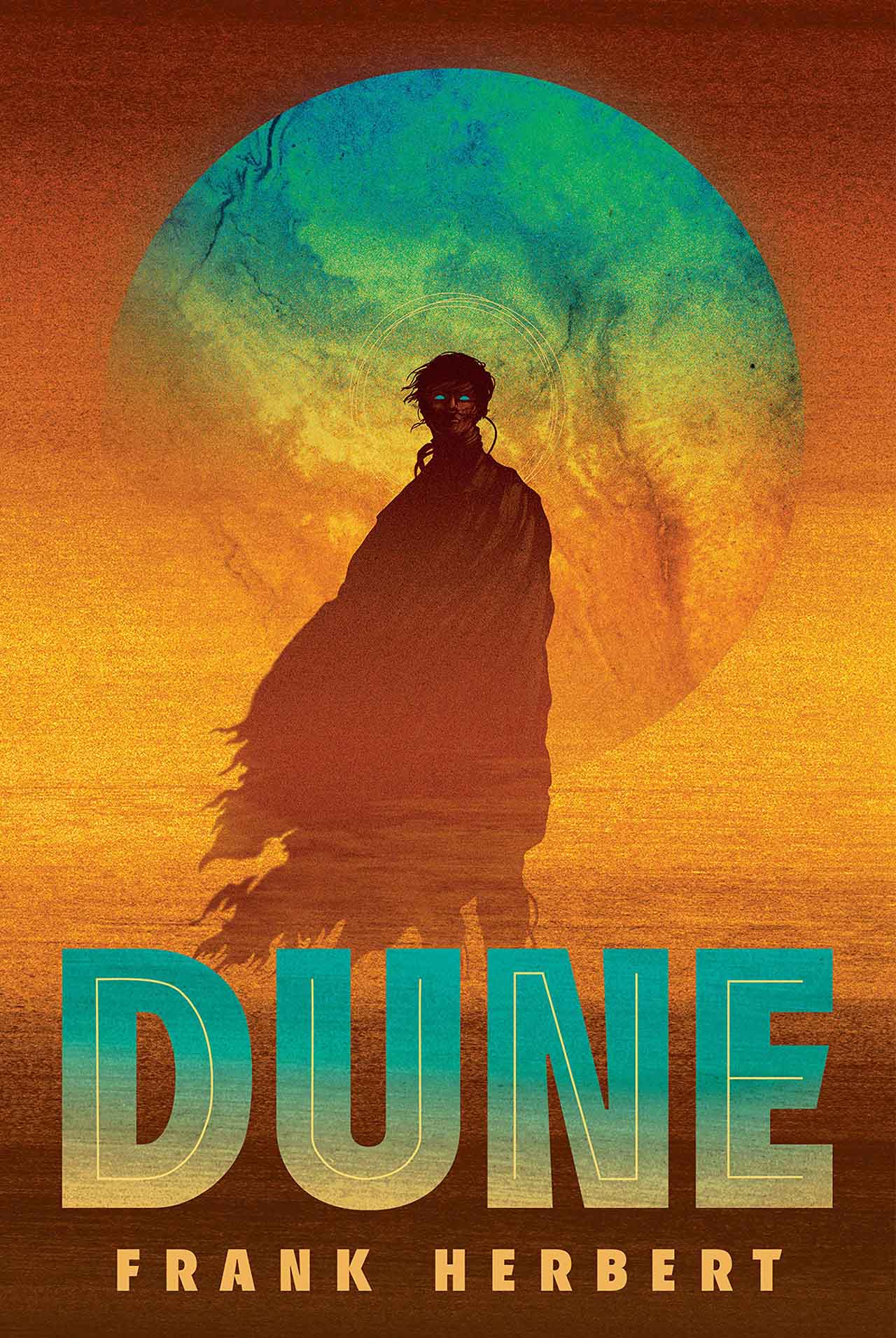 Without going into spoiler territory: The novel that started it all and the 2021 movie is based on, Dune, focuses on Duke Leto Atreides of House Atreides and his family – namely his concubine Lady Jessica and their son, Paul. Leto gets assigned by the Emperor to step in as the ruler of Arrakis, a planet of enormous importance because it is the only source of Melange (spice) in the known universe.

Leto knows that stepping in to rule will put himself and his family in grave danger, but he also understands that the Emperor’s offer was not one he could refuse. Almost as soon as House Atreides steps into power, Shaddam conspires with House Harkonnen (the house currently in charge of spice harvest) to get rid of Leto as well as the rest of House Atreides.

If you’re looking to watch Dune and then read the story it’s based on but feel overwhelmed when faced with the entire series, then don’t worry. Dune by Frank Herbert can be treated as a stand-alone book and story. Although you’ll probably find yourself wanting to read the rest after Dune is done, you won’t be missing out on the core story if you choose not to.

Dune Messiah; Children of Dune and God Emperor of Dune by Frank Herbert 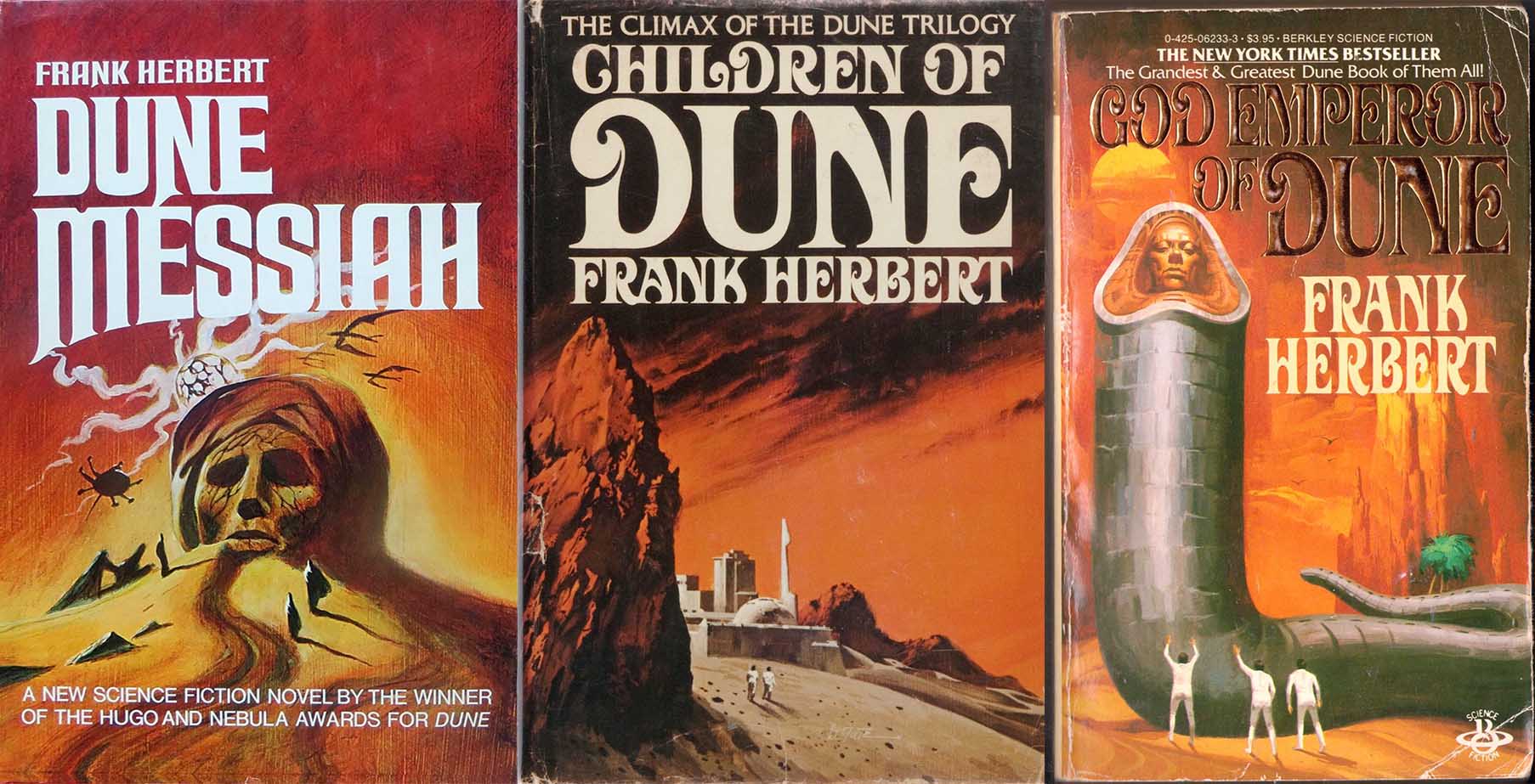 If you find yourself still wanting to explore the universe further, then the next three that you’ll find yourself wanting to dive into would be Dune Messiah; Children of Dune and then God Emperor of Dune. You’ll be starting off with Dune Messiah, and while its core narrative builds directly upon the setup of Dune, it’s also able to be consumed as a stand-alone story without you knowing the previous book. It also serves as the launching point for the subsequent four novels in the series.

Children of Dune is slightly less accessible than the previous novel as it focuses almost entirely on the new Emperor’s children who are coming of age in the middle of a massive social and economic revolution. While it could be enjoyed without having read the previous two titles, you won’t get the full effect of the book if you don’t.

The final book in this group would be God Emperor of Dune. This is the first time that previous knowledge is essential in order not just to enjoy the book but also to understand it. In order to try to help readers who are jumping in for the first time, the book spends the first few chapters trying to get readers up to date with the previous novels, but even so, it just isn’t a novel that is able to stand alone.

Heretics of Dune and Chapterhouse: Dune

Next up are the final two books that were written by Frank Herbert and mark the end of the original series, these are Heretics of Dune and Chapterhouse: Dune. Chapterhouse: Dune marks the end of Frank Herberts original Dune series, and if you’re only interested in reading his works, then this is the end of the novels for you.

Now we start on what’s known as the Extended Series. These novels all build on the world created by Frank Herbert, but instead, they are written by Brain Herbert and Kevin J. Anderson. These are all written as either duologies or trilogies. 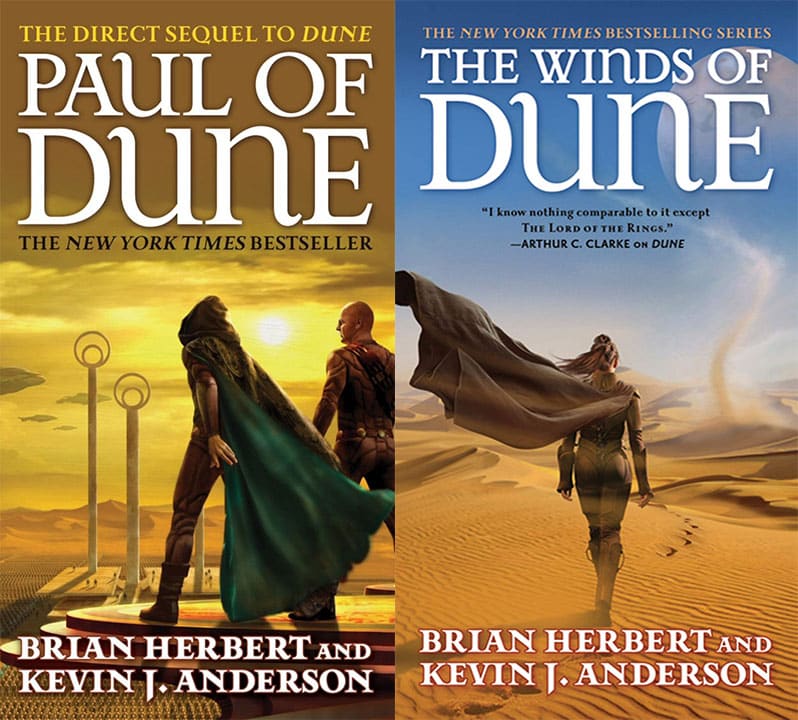 The first of the Extended Series would be Paul of Dune, which takes place between the events of Dune and Dune Messiah. The story follows Paul Atreides, who finds himself in complete control of Arrakis, therefore one of the most influential people in the universe.

Your next read should be The Winds of Dune, set directly between Dune Messiah and Children of Dune. This story focuses on Lady Jessica, who finds herself back on Arrakis following the disappearance of her son Paul, now known as Emperor.

Hunters of Dune and Sandworms of Dune

Next up in our journey into the Dune universe is Hunters of Dune and Sandworms of Dune. 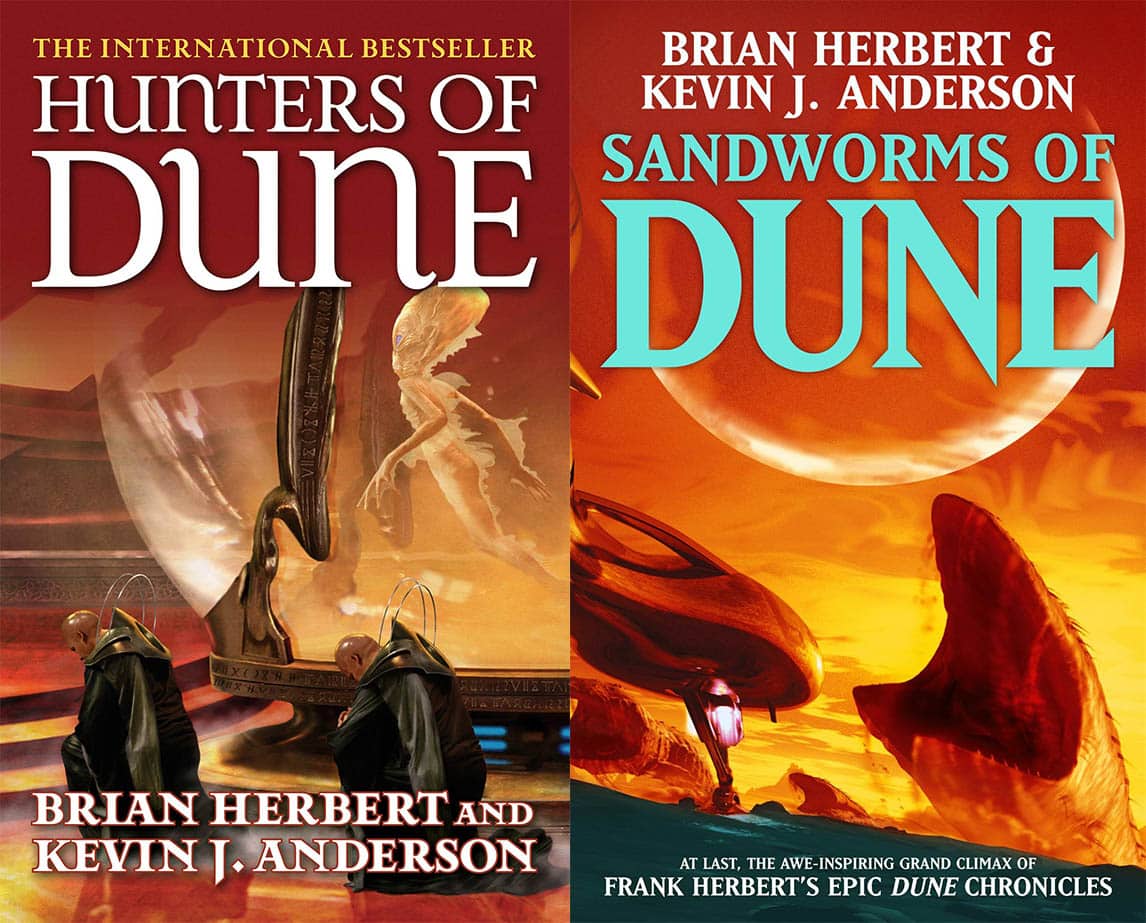 Hunters of Dune seeks to wrap up and finish many plot points, which were never addressed at the end of Chapterhouse: Dune. Hunters of Dune is a direct continuation and is based on notes that were left by Frank Herbert upon his death. Sandworms of Dune is also loosely based on found notes and represent the author’s own version of what Frank Herbert referred to as Dune 7 in his notes.

We then move into the first three prequels to Dune: House Atreides, House Harkonnen and House Corrino.

Each of the books in this prequel trilogy is told from the point of view of one of the three Nobel houses, each of which lends their name to the books, and each of these books draws from the notes that Frank Herbert left prior to his death. These books are all set roughly 30 years before the events of the first Dune novel.

The Butlerian Jihan; The Machine Crusade and The Battle of Corrin

The second prequel trilogy is known as: The Butlerian Jihan; The Machine Crusade and The Battle of Corrin. 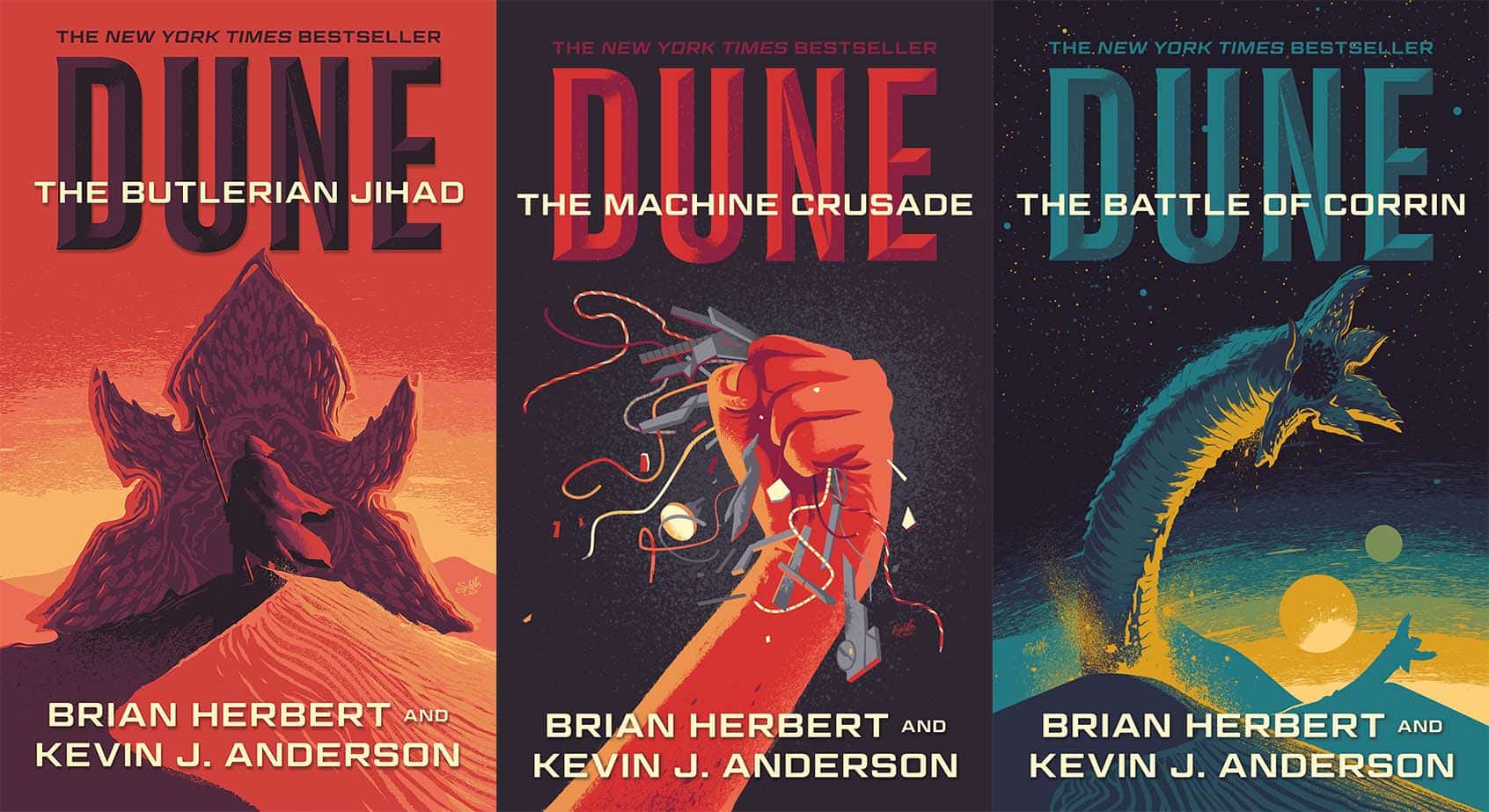 While the first three prequels to Dune are set in the decades before the first novel, this set of prequels starts us off thousands of years before. They tell the stories of the war between the last free humans and the thinking machines and introduce the families that would form the Great Houses.

Sisterhood of Dune; Mentats of Dune and Navigators of Dune

There is also a final prequel trilogy consisting of Sisterhood of Dune; Mentats of Dune and Navigators of Dune. These three books all continue on from the events depicted in the previous trilogy. 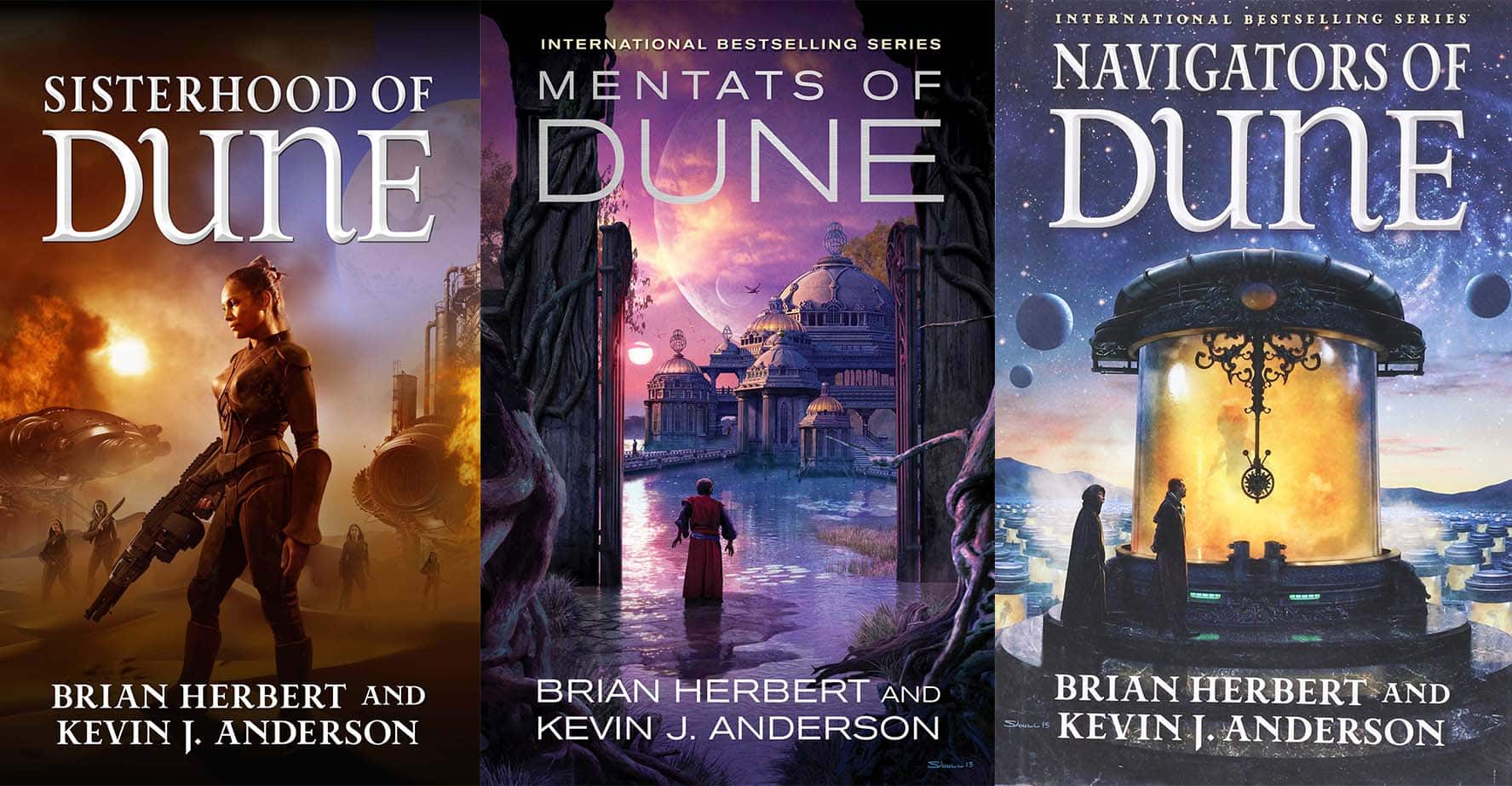 Okay, so now you know the basic premise of Dune, and you know the reading order for the books. Still, let’s say you have little to no interest in reading the books, and instead, you just want to be able to go into the movie and enjoy it as much as you can. In that case, here are some terms that will be used frequently throughout and what they mean:

A personal shield is an energy barrier that is customized to suit the needs of the one wearing it. Personal shields can protect the wearer from most things at range, although they can be penetrated if attacked correctly.

Spice or Melange is the single most sought-after and essential resource in the entire universe. Spice is a drug that has mind-altering properties and can make the user more intelligent and live longer. Spice is also required for space travel as without it, the pilots aren’t able to navigate.

Arrakis is the only known planet in the universe where Spice or Melange can be found, making Arrakis and whoever rules it the most essential part of the universe. Arrakis is a desert planet with very little naturally occurring water. It is also filled with massive and deadly sandworms that roam the entire planet.

Stillsuits are used by everyone who lives on Arrakis in order to survive its harsh climate. The Stillsuit protects the wearers from the extreme heat and sandstorms while constantly collecting all the liquid that’s expelled from your body, filters it, and makes it drinkable again.

This is the name given to the people who are native to Arrakis. These people are known for their electric blue eyes – a result of constantly being surrounded by spice. The Fremen are also often seen wielding something called a “crysknife” which is a sacred weapon that gets forged from the teeth of the sandworms.

The entire universe of Dune is controlled and run by a single ruling family known as House Corrino. The head of House Corrino is Emperor Shaddam IV. In order to remain the Emperor of the universe, Shaddam is constantly trying to keep all the other houses happy and under control.

There is a big focus on Bene Gesserit during the Dune movie. They are a guild of women, all with supernatural powers. The Bene Gesserit can use something known as “the voice” to manipulate those around them. They are also able to create poisons by changing the chemical compositions of their bodies. The Bene Gesserit are known by many names, such as witches or holy women. They are feared and respected throughout the universe.

In the Dune movie, you’ll be introduced to Thufir Hawat of House Atreides. Thufir is one of the greatest Mentats in the universe. Many years ago, after a war with machines, the Great Houses permanently banned the future use of computers. To replace computers, the Great Houses created Mentats which are humans with the power of computers. The Mentats are capable of doing complex calculations in mere milliseconds.

House Harkonnen was previously in charge of harvesting spice on Arrakis before being replaced by Houses Atreides. House Harkonnen are not known for being good people, and they will do anything in their power to regain control over Arrakis and its spice once more.

This is the house that you will follow while watching Dune. Led by Duke Leto Atreides, House Atreides has a reputation for always doing the right thing, and this has secured them as one of the most popular of the Great Houses.

When it comes to Dune there is still a lot more to dive into and learn but Dune (2021) covers roughly half of the first Dune novel during its 2 and a half hour run time so everything in this post will more than prepare you for the visual marvel that is Dune. Are you planning on braving the cinema again to watch Dune? Let us know in the comments below.