Advertisement
Why you should take notice of The Occupation

White Paper Games’ first title, Ether One, received almost perfect scores from critics around the world. Two things resounded through most reviews; Ether One is smart, and it’s incredibly beautiful. I also reviewed the game, and it’s both those things and so much more. It was exceptional in the way it tapped into the player’s inner dialogue, and in how it portrayed an incredibly sensitive subject (dementia). A few days ago, WPG announced their next title, The Occupation, and from what we’ve seen so far, it will not only aim to surpass what they’ve accomplished with Ether One in terms of visual and sound quality but also take the player on another compelling journey.

We’ve had the pleasure to chat to Pete Bottomley, WPG founder and the developer behind Ether One and The Occupation.

“A terrorist attack has left 23 dead & has become a catalyst for the creation of The Union Act. A controversial act which threatens the civil liberties of the British population. The day is October 24th 1987 and the next 4 hours will determine the outcome of the act and the future of the country. Events happen in real-time and you must make decisions based on the evidence surrounding you. Is the cost of an extreme action outweighed by the cause of the greater good? You are the reporter. You decide the narrative.”

Did you draw inspiration from Edward Snowden for The Occupation?

“There was a lot going on around the time that Edward Snowden first leaked the files. He was definitely a big influence when we started concepting The Occupation, but I also think he was just one example of a growing cultural concern over governmental powers, surveillance, and privacy. Other lesser known people such as Aaron Swartz and the ‘Winter on Fire’ documentary were incredibly impactful when we were beginning to think about the story we wanted to tell. We didn’t want to stay too close to real-world events or try to mimic any people since we wanted more of a blank canvas for player’s to project their character onto.

It is interesting that “immigration is at the heart of this debate” any relevance to what’s going on in American politics at the moment?

“It’s kind of surreal how closely the trailer dialogue became related to current politics. We wrote those dialogue lines around 12 months ago – a time when the UK was facing immigration issues, and the country was showing a very different side than we had seen before – we had a Syrian immigrant ‘crisis,’ and the reaction around us was shocking to witness.

The concept had been initially developed even earlier than that, even before the European “immigrant crisis” had become the huge news it was around late 2015, so it was strange to see the theme we had chosen becoming increasingly relevant as time passed. Fast forward, and we’re seeing a similar trend in the US too. It’s a very weird climate to be in when you can observe quite a huge cultural and societal shift in such a brief time. It’s an incredibly volatile political atmosphere we’re in at the moment, we can’t help but we affected by it when designing our games.

That being said, we want to reinforce the narrative that we’re trying to convey rather than our political opinions. This isn’t a game about “Listen to us tell you what we think about politics.” It’s about the grey areas & empathy, or lack thereof. We wanted people to witness someone, not of the same beliefs or background as you, doing something terrible and to see whether you can appreciate their reasoning.” 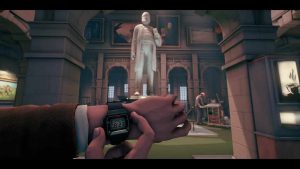 I can just imagine the many layered puzzles we’ll find in this one! Will it form a central part of the game or even more so than it was in Ether One?

“I’m a huge fan of puzzle design and find a lot of enjoyment creating scenarios for players to work through. This game is a little different in it’s approach to the puzzle design, and you won’t find many parallels with those of Ether One.

I’m happy with what we achieved with the design of Ether, but I wanted to try something a little different with this game. The puzzles won’t have linear solutions, and they are more system driven. I.e we don’t want to say to the player ‘Go pick up this item, place it in that specific place to cause X event to happen.’ Instead, the idea is to give the player a goal and a set of tools to get to the goal.

It’s a similar way in which an immersive-sim like Deus Ex may tackle that specific challenge. When you’re talking to someone about a game you’ve played and your experience differs to theirs – that’s a really powerful thing for me.

It means your experiences are completely different and the world is reacting to the player’s actions.”

You stated that “We’re hoping to deliver something with the same narrative impact as Ether, along with a (hopefully) unique approach to gameplay which has been heavily inspired by the immersive-sim genre.” Can you elaborate a bit on that “unique” gameplay approach?

“So, we were just having a discussion about this in the studio – one team member said, “I wonder what people will think of a walking simulator mixed with Dishonored.” Regardless of the connotations linked with first-person narrative driven games, there’s something interesting in mixing the system and emergent gameplay from games such as Dishonored, Thief & Bioshock and combining them with the core interactions and narrative beats you find in games similar to Ether One. If you remove the power-upgrade systems, health bars, and combative enemy AI’s, there’s a lot of room for exploration in the world and the connected gameplay systems that you can play with.”

Politics form the central theme in The Occupation and the 1980s in England was a time of extreme political unrest – will your game reflect on some of the real-life events from England in the 80’s?

“I think reflect is definitely the key word – we’re wanting to create a fictional world in a similar way we did with Ether One. Pinwheel from Ether One was based on a small Cornish fishing village. So in a similar way, the city in The Occupation will be based on a North-West city. Since we live in Manchester, UK, it’s hard not to be inspired by many of the things around us and they’ll naturally bleed into the game.

Just last year, we had a big political conference in the city. We went to watch the demonstration, and we got a bunch of audio footage of people protesting and also a good idea about the tone and intensity of the demonstration. I don’t think we intentionally seek these things out, more so our experiences reflect the design decisions we make.”

The game plays off in 1980’s England, with your protagonist a female – is there a correlation between having a female protagonist and the fact that M Thatcher was elected as prime minister in 1990?

“We’ve never really thought about the correlation – it’s an interesting point to raise, but it’s not a conscious decision. The female PM during the time period will be part of the fiction of the world but not for reasons connected with the main protagonist. One thing we did really try to focus on was having a really diverse cast of characters though, and having a female protagonist is probably a symptom of that. It makes the characters more interesting for us to work with, we can emphasise this and explore the big differences between them, but also the elements that bring quite a varied group of characters together, the human attributes that they have in common, which we think feeds really well into the overall theme.”

Your art and animation look incredible, are you using the same creative team that worked on Ether One?

“Of course! Without it sounding too cheesy,  it’s like a family here! We have a very close group of people who work incredibly hard to achieve really cool things. We hope that if you’re working with us, then it’s something we can keep building upon for future games. We have the same artists plus another who joined the team just over a year ago. We also have an animator and an AI designer on board now.

The voice actors from Ether One (Ben Britton and Elspeth Edmonds) both have had characters written specifically for them, and we have another six people doing VO who we’ll be introducing very soon. We even have the same person (Alex Bellingham) who did the Ether One and WPG logo doing The Occupation’s logo. A couple of the team left after Ether shipped; (Ben Hill,  Smith) as they wanted to move onto different creative challenges however they’ve both had incredibly valuable input on The Occupation and provided great playtesting feedback. It’s all a collaborative process, and it’s been so fun starting a new project as an existing team as things came together very rapidly in the pre-production phase since we already knew each other’s workflow. I think that large factor in being able to get so much of a leap from Ether One.” 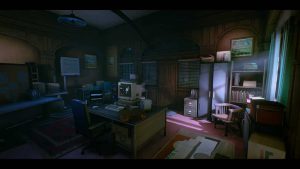 Will there be multiple endings in The Occupation that will be driven by player choice?

“Yes, that’s definitely the plan. Although similar to Ether One, we’ll leave working on the ending till last. Not just because it’s the ending – we don’t actually start with the beginning of the game until midway through development once we know the core mechanics and what’s needed for the opening – but because it’s kind of nice to tie everything off last in the project.

The second ending of Ether came online very late in development, and it resonates so strongly with the team every time we see it – part of the reason for that will be because we haven’t had to see the same sequence thousands of times in playtests, but partly because it closes off that chapter of your life. It’s a really powerful thing.

On which platforms will The Occupation release?

“We’ve not announced platforms but not that’s purely because we have no idea – we’ve not even confirmed PC yet! We’re hopeful about the PC platforms and we just need to chat about the console partners to see what we can get in place. We’d love to release on as many platforms as we can as Unreal supports them all well. We’re excited about Unreal’s new support for the Nintendo Switch also – we have no idea if it will work but that’s something we’d be interested in testing.”

The Occupation will release later this year, and if there’s one thing I took from this interview, it’s that it is the right game for the right time.