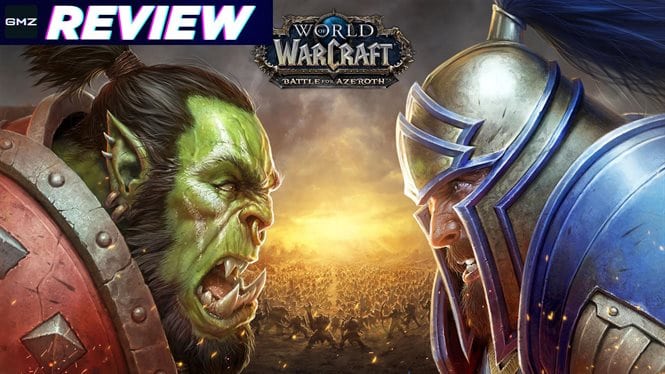 I don’t claim to be a professional World of Warcraft player by any measure. I jump into the game perhaps three times a year for a few weeks to see what is new and what releases with the expansion. It has been a while and the Battle for Azeroth expansion follows 2016’s Legion release. While the experience does not live up to Legion as it was the best WoW expansion in years, it delivers yet again a fantastic entry point for newcomers as well as a load of content for those craving something new to play. It may have some plot holes and a few disjointed characters here and there but as a package, Battle for Azeroth delivers a solid Warcraft journey. 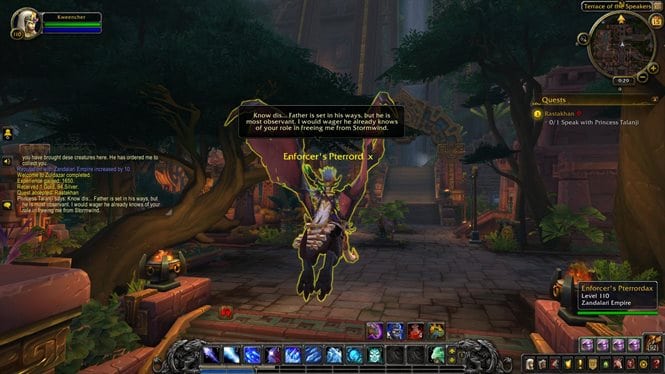 Battle for Azeroth takes place right after the events of Legion after the Titan Sargeras was defeated and locked away. The early missions in Battle for Azeroth shed some light on these events and how he plunged his sword into the world causing the creation of life-blood known as Azerite. Blizzard has always put a heavy focus on the whole Horde versus Alliance scenario but Battle for Azeroth takes that a step further now by truly creating a war between the two factions which lays the foundations for the expansion. 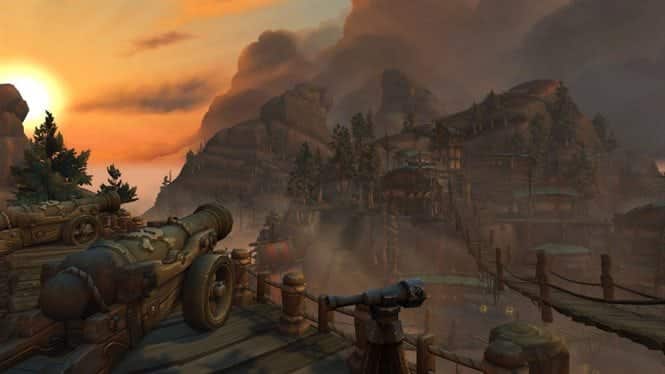 We have all seen the epic cinematics leading up to the expansion’s events and the world’s order is in ruins as the two factions want blood and they want it now. I created a Dark Elf ages ago before Legion launched and I had always wanted to get back into growing her, which I did in this expansion. Like all previous versions, this also came with a character boost that took me up to level 110. Jumping back into the game was not easy, and I won’t tell you it was a walk in the park but Blizzard has been making WoW noob friendly and the more you don’t play it, the more it is easier to get into.

Being part of the Horde, I started my Battle for Azeroth journey in Zandalar. Zandalar is gorgeous and it could be one of my most favourite locations in the game. The whole Aztec theme truly shines in WoW’s unique art style and it makes for a fantastic area to explore. Dense jungles filled with giant dinosaurs, swamps with poisonous gas and towering temples fill the island with personality. Every new area delivered an exciting new visual feast. 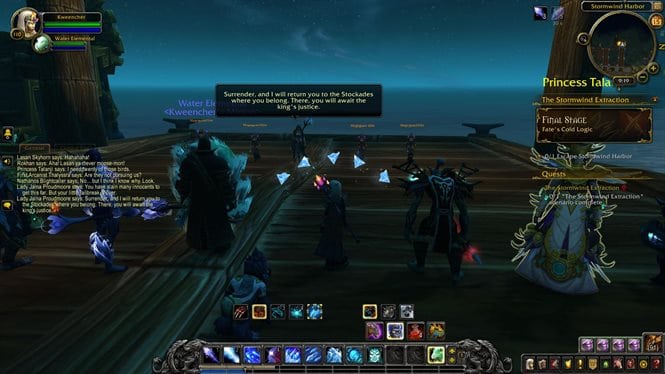 Like Legion, you can select any starting area in Zandalar to experience first and explore. There are various quest lines to undertake in each sector offering a variety of tasks. While many of them revolve around the same fetch quests, the dialogue backed with the interesting characters you meet along the way makes the experience worth the trek. You can also jump to and from each sector at any time making it a broader experience rather than locking you into a specific place for the duration of your grind. Going from the swamplands in Nazmir to the mountain areas of Drustvar offers a great break from the tedious questing and while I thought I would be able to stick to one area for longer, it becomes too much to handle. 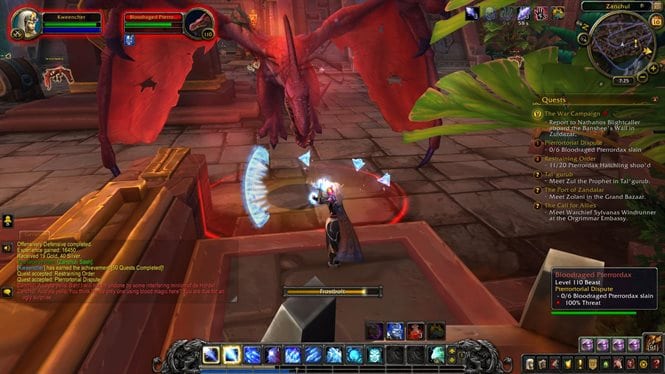 I have always had an issue with WoW’s tedious quests and they stick their ugly nose out in Battle for Azeroth more than ever. They have layers to them if you dive into the dialogue and characters giving you the tasks but at the end of the day, they are all just “fetch this” and “kill this” which becomes very boring very fast. The idea of each quest sounds great especially when it revolves around eradicating a group of giant Pterodactyl-like creatures but when you realize you are only at five out of fifteen killed, it begins to feel a bit dry. If you are a character lover and are fully dedicated to meeting and getting to know every one of them then you will love the quests but just know that each quest giver follows with a tedious quest.

Zandalar is filled with new things to see and do. Of these include the new Foothold quests and Expeditions. These are vital to power levelling your way up to level 120. Footholds are quests that see you venture into your opposing faction’s territory and creating a safehouse-like setup. Once done, you can then explore the zone without being part of that faction and it unlocks new quests and content in that area too. While many of these quests are still tedious killing and fetch quests, the new exploration zones and change of pace create a break from the zone you start in which you get used to and bored of very quickly. 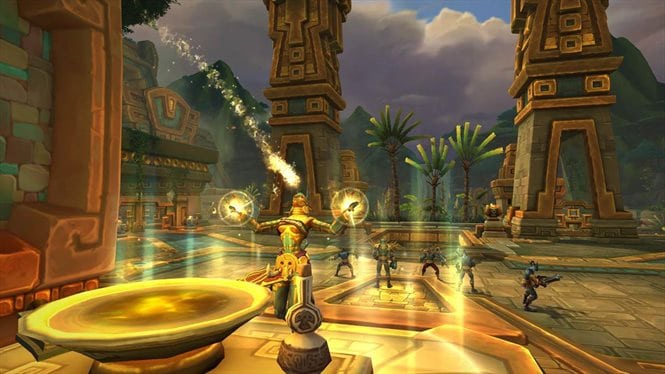 The Expeditions are, unfortunately, also the short end of the stick. This mode sees you and two other players fight against each other to try and collect that shiny Azerite on a procedurally generated island. It is simple, gets boring and that is it really. Nothing fantastic but a necessary part of the game’s progression system. This mode can be played with AI which for me, was a benefit. I am simply terrible with all the WoW hotkeys and buttons.

Speaking of being terrible, my biggest fear in each WoW expansion is the dungeons and of course I had to test them for the purpose of this review. It seems that Blizzard is making it easier for noobs like me to experience what the game has to offer by delivering dungeons that are not too hard to complete. I tried a couple with matchmaking and we managed to complete them without any huge issue. Shrine of the Storm saw me explore a water temple cave with deadly slugs and other water creatures. The Underrot took me to an undead graveyard filled with poisonous clouds and toxic enemies. The dungeons I played were great and doable on normal. I doubt I would ever attempt them on the higher difficulty but just know that the expansion offers some great experiences and of course epic loot to get from each one. 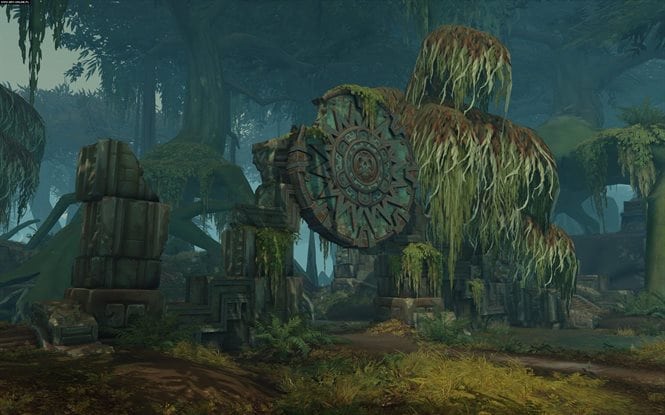 After completing the three foothold quests and unlocking the sector you then progress further into the end-game content which includes World Quests. These quests are gritty tasks that see you hunt down specific powerful enemies and collect a specific amount of a set item. Basically, WoW’s fetch quests but on a much grander scale of things. These quests act as stepping stone to the last end-game content such as the raid and mythic dungeons. When it comes to loot, Battle for Azeroth has tossed away the Legion artefact weapons for a powerful necklace known as the “Heart of Azeroth”.

After an epic mission to get it, you are given access to its powers. As you collect its resource, the Azerite, you will level it up using its currency. That, along with the new Azerite armour you find in the game combine together to create a new loadout for your character. It all makes for a brand-new system where you can unlock new skills and tweak stats to fine tune specific abilities. At first, the idea of Azerite gear seemed fun but soon after it did become something I forgot about. Finding new resources or even levelling up specific skills never became a priority for me. I just preferred the Legion weapons perhaps. 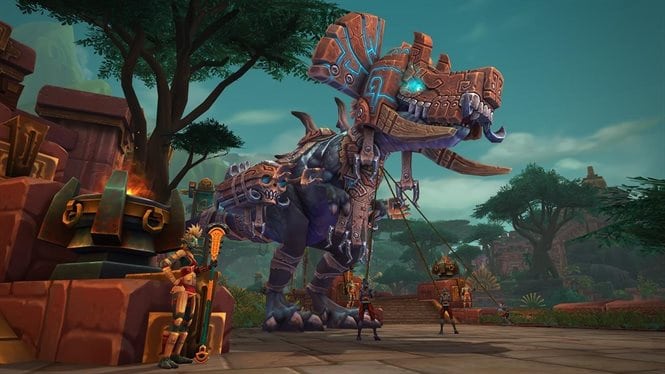 The battle for Azeroth features a brand-new way to experience PvP and it is strange but effective. Instead of logging into specific servers to experience the Player-Versus-Player mode you can enable War Mode which basically turns you game session into a PvP version. Obviously, you are then in a server with players that have the same intention which means you will then need to prepare yourself for a PvPvE experience. It does have its benefits though as Blizzard has added an extra 10% XP boost that kicks in when you are in the mode. I, for one, did not fancy this mode much being a WoW noob to some extent as it just meant I was an easy target and most of the time, people just hunted me down and were relentless. Regardless of my experience with it, the mode is a great change to the typical PvP server restrictions and if you are a PvP fan then you will love this. Battle of Azeroth may not be as epic as Legion but it yet again opens up WoW to everyone. Its new Foothold quests mean anyone can jump in and tackle anything they want at any time and this is all backed by a gorgeous new continent to explore, a gripping story and of course great dungeons to face for epic gear. WoW fans will love it and newcomers will find it easy enough to wrap their heads around even if they stay off the PvP mode for a few months.