There is no doubt that a load of game studios have been trying very hard to fill the void created by the lack of a new Left 4 Dead. Some studios have done it well like Fatshark with the Vermintide series and others not-so-great like Earthfall from Holospark. World War Z is another attempt at the genre pitting four players into a chapter-based experience as they venture through locations around the world killing hordes of zombies that come at them. Using teamwork, gear and unique players classes, World War Z successfully creates a fantastic team-based shooter even if it is short-lived and shallow at times.

In short, World War Z is the closest thing you will get to a Left 4 Dead game at this present moment with Saber Interactive using the World War Z movie as a setting for this zombie survival shooter. The game is based on the Brad Pitt film from several years ago and takes locations and some story plots from the film and successfully develops them into a video game. That is saying a lot given how games based on movies have a reputation to be epic fails. World War Z is an exception to the rule here as it is a lot less of a film adaption and more of a zombie shooter based on the film’s setting.

World War Z spans across four chapters based on some locations from the film. New York, Jerusalem, Moscow and Tokyo. Each chapter contains two or three missions to take on with a team or solo. Playing online means you will go into a mission with three random players and offline means you play with three bots, which are not bad at the game at all. You have better chances surviving the harder difficulties playing with bots than some of the nightmare players I met online, to be frank. At the time of this review, there was also no way to create a private game and play with one or two friends with bots filling up the empty space. 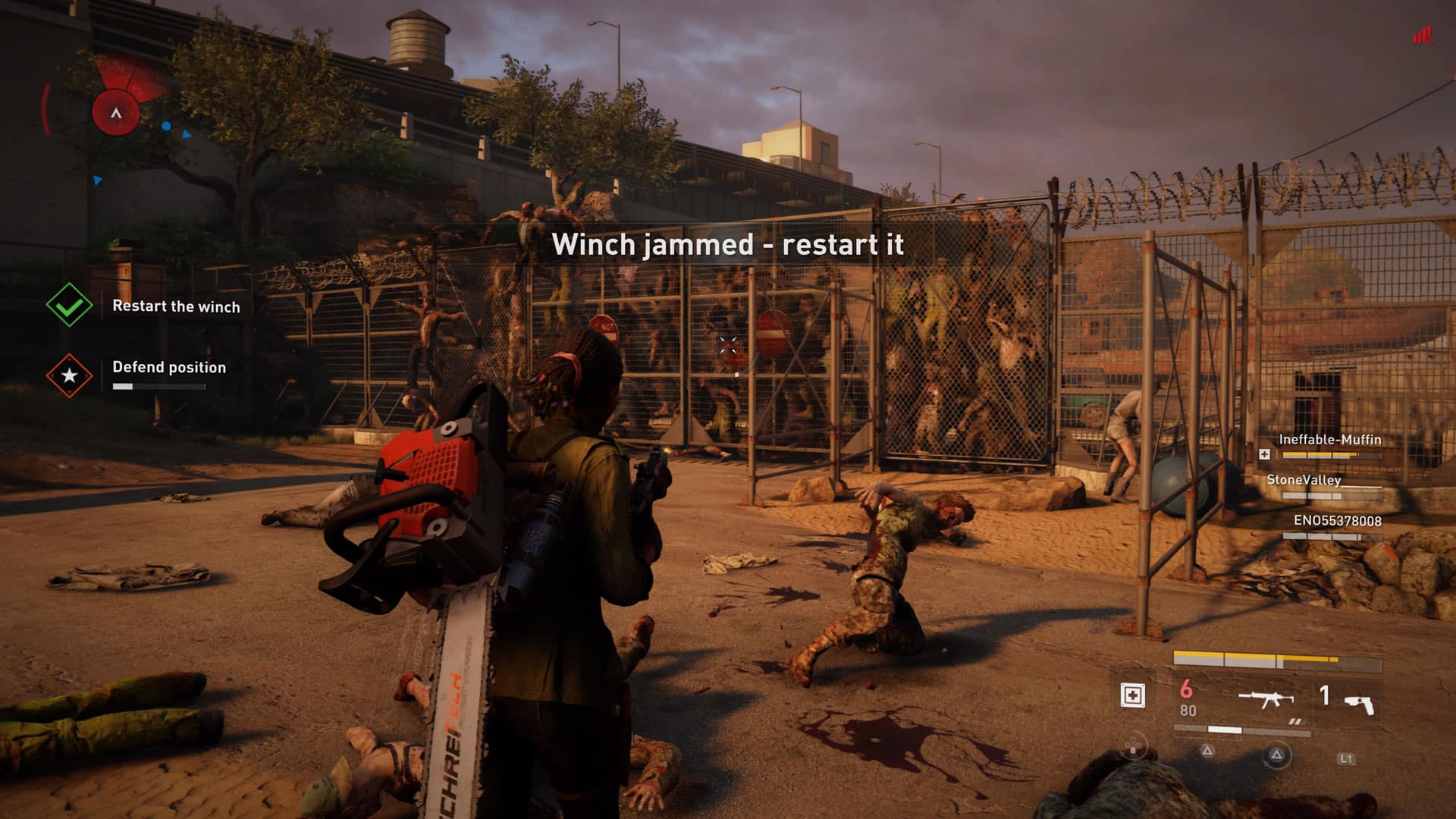 As you prepare to head into each mission, you can select from various weapons and character classes. There are eight different classes, each of them being unique to a certain degree when it comes to its own skill tree. Skills are unlocked as you progress through the game and help you in tough situations. I liked the Slasher class that let me deal heavy melee damage and equip myself with a stun gun that paralyzed large groups of enemies when I shot them. Another over-powered class is the Medic that can give you and teammates a temporary health boost which comes in handy right before death or as soon as a bull charges at you or a player. 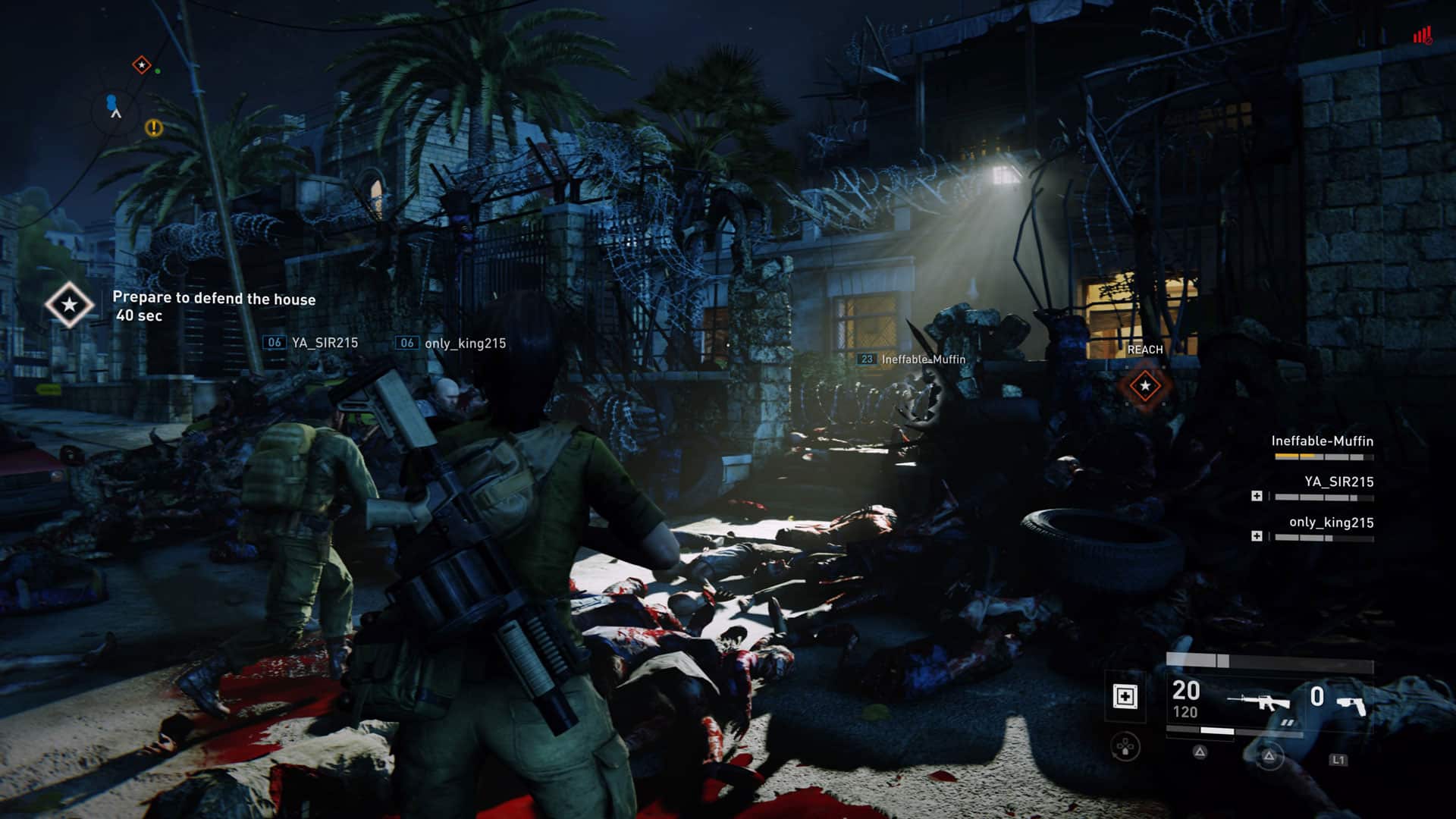 Classes are upgraded as you use them with you gaining XP at the end of every mission. You also need to further enhance them by purchasing kills by using in-game currency which you also earn at a slow pace by completing missions. The system works and adds a decent layer of depth to the repetitive and short game but there are some issues. You earn currency way too slowly which makes the whole experience a big grind. You also earn the same amount of currency even playing on higher difficulties which makes attempting them pointless. Rather rush through every mission on easy than suffer through the painstakingly higher modes for the same rewards.

The missions take you to interesting places but in the end, they all are pretty much copy-and-paste with the same said for the enemies. Saber Interactive boasted on how the enemies are smart and can adapt to a specific situation but this is not the case. Sure, the zombies are fast and deadly and are clearly taken from the World War Z movie but they are shallow and lack any unique characteristics. The infamous “zombie pyramid” from the film is always created during predetermined encounters at the same point during the same mission. There is nothing special about these “advanced hordes” at all and the sooner I realized it, the quicker the game became just another mindless zombie shooter.

It would have been nice to have different challenges thrown at me throughout the game and create some sort of random experience in every mission. Sure, watching the hundreds of zombies flow off a roof like a tidal wave just like in the movie is cool, but it grows tired very fast when it always happens in the same spot and the outcome is always the same. The enemies are deadly and while one cannot kill you, you need to keep your head above the hundreds of them else you are pretty much screwed. Enemy variety is also lacking as the handful of zombie types, just like the unambitious hordes and “zombie pyramids” lack any sort of challenge. The Lurker leaps at you and leaves you incapacitated until killed by a teammate. The bull charges at you and knocks you down before slamming your head into the floor, and the hazmat zombie leave toxic gas behind. 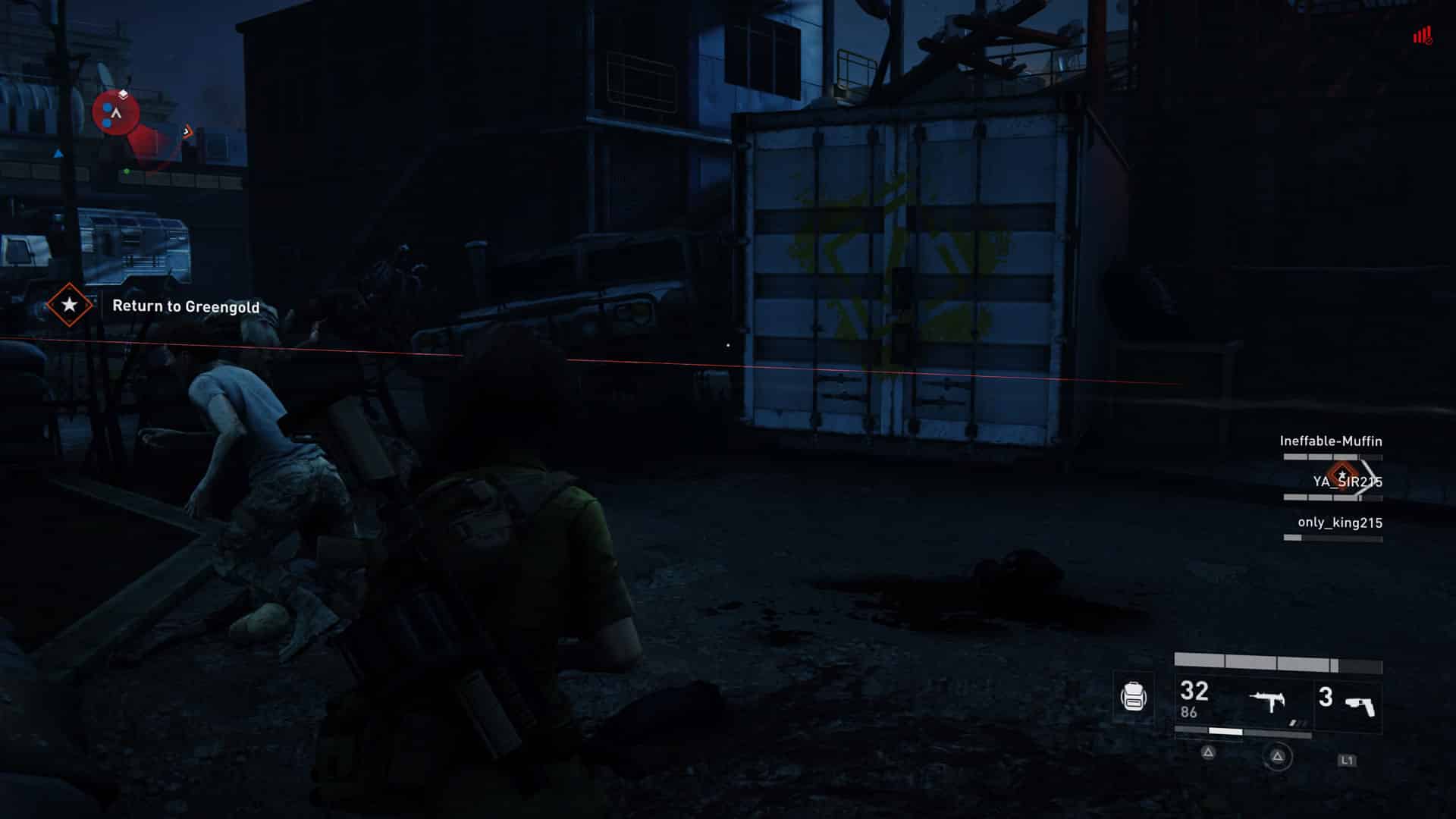 Sound familiar? That is because it is. Enemies might look different but they are reskinned version of Left 4 Dead’s zombies. Don’t get me wrong, it works but a little originality would have gone a long way to creating different encounters in World War Z. Where the game does shine is in its unique approach to its hordes. There is just no other game that manages to deliver thousands of zombies coming at you from every angle as you try to fend them off while some snail-paced engineer tries to fix a train.

It all also depends on your weapons and World War Z has plenty of them. As you progress through your class, you will upgrade new weapons which have better magazines, stability and damage. Unlocking these weapons means you can start each mission with them until you decide to replace it with something you find in the area. Each player can hold a primary, secondary and heavy weapon with the heavy type being limited in ammo and once consumed, it vanishes. Other weapons can be refilled at ammo boxes scattered around the stage often found next to medkits for health. Each level also has some mounted guns and traps which you can place around areas that you need to stay near for an allotted amount of time. Some of them are giant mini-guns that you can get on and use to mow down enemies, and others are automated turrets and electric traps that you place on the floor.

This is where strategy comes in. You need to place these defences in the right places where you think you have a weak spot in your team. The mini-gun can only angle itself to a certain degree so you need to be sure to keep that in mind. Then again, the game’s predictable hordes make this easier later in the game.

If PvE is not your thing then there is also a PvP mode that mixes the zombie hordes with other players as you need to fight them and the walking dead at the same time. These modes come in different forms such as King of the Hill, Vaccine Hunt, Deathmatch and Scavenger Raid. Once you have exhausted the PvE modes and get tired of the predictable outcomes, this could be the perfect mode to offer the variety the game is in dire need of. 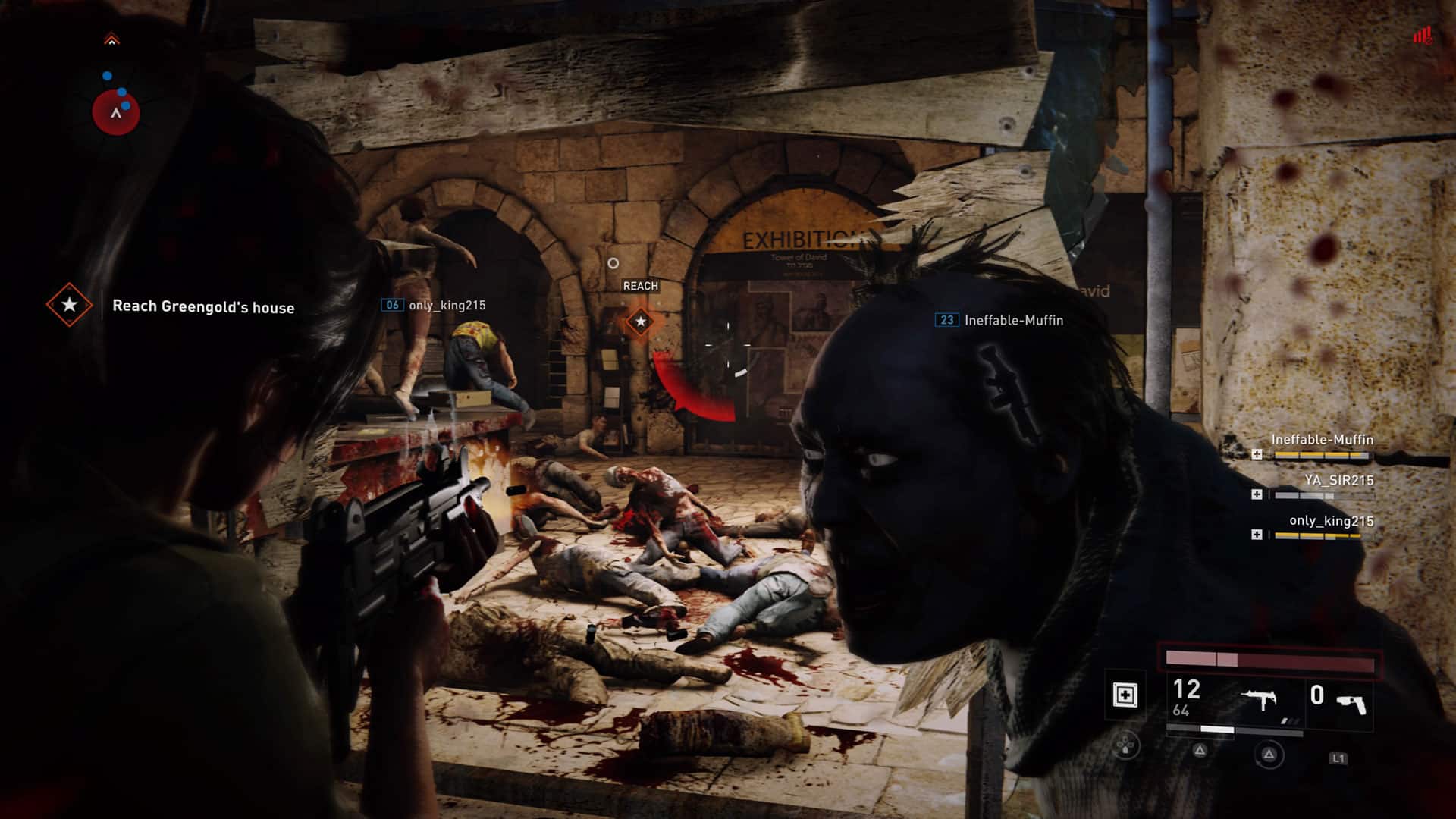 World War Z at times feels like a missed opportunity to create a zombie game where you never know what is going to happen. The film’s setting could have done wonders to create an intense and unpredictable experience but alas, we got an unoriginal zombie horde shooter. It is a great game, don’t get me wrong as it delivers some intense moments, great co-op play and the thousands of zombies on screen at once makes you sweaty but I cannot help but feel like it is missing something. I will most likely spend countless hours in the game unlocking everything I can but it will grow boring quite fast. Hopefully, some new levels are coming in the near future.