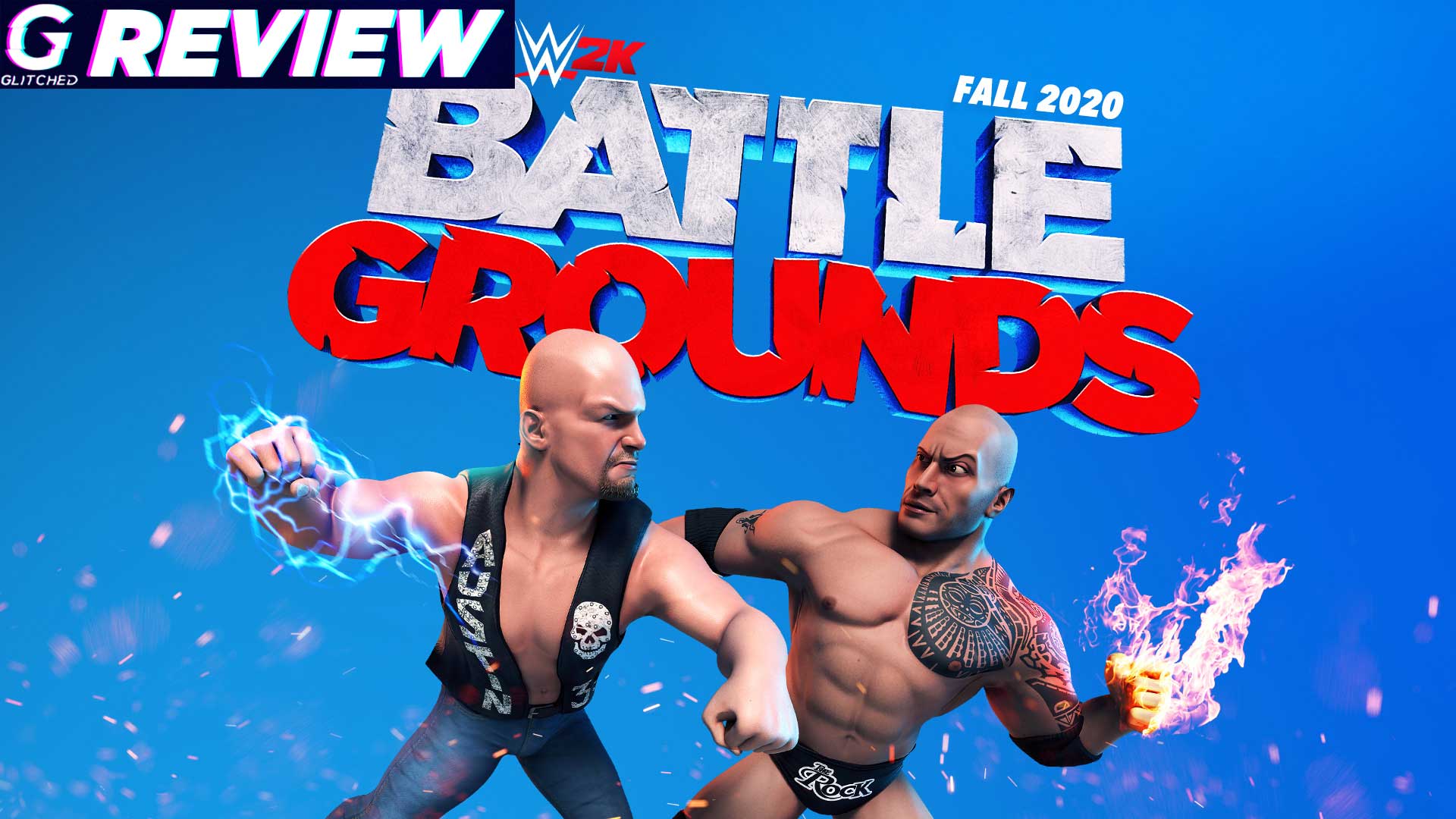 The WWE 2K series has a reputation for being a mess. Last year’s 2K20 was a complete disaster with visual bugs, game-breaking glitches and not to mention the horrendous microtransactions. It is about time 2K Sports dropped the annual release and focused its energy on something new. WWE 2K Battlegrounds is this “new” approach and it is hella fun. For the most part, the game manages to bring back the simple and classic couch co-op days or power driving my brothers head into the ground and taking an arm beating for doing so. Anyone who grew up playing WWE on PS2 will feel right at home here. Although the game does have a cartoonish art style, the WWE 2K Battlegrounds wants to make wrestling fun again and it works.

If you have watched any WWE 2K Battlegrounds trailer then you will understand exactly what the game is. It is an over-the-top arcade wresting experience with lots of flash and flair. Sure, it is missing the so-called “realness” of wresting but let’s be honest, most of it is overacting anyway so the concept suits the sport just fine.

WWE 2K Battlegrounds is the most fun I have had in a wrestling game in a long time. This is thanks to the approachable gameplay, great combat and over-the-top action. It is basic and after a few hours with the game, I had mastered the combat and just began testing a bunch of wrestlers. Each stylized wrester has a unique set of skills and throws that make them fun and different to play. In addition, there are various “classes” which each of them fall into that help distinguish their play style. For example, Bray Wyatt who is a “Brawler” has increased damage with weapons and kicks. “High Flyer” superstars specialize in aerial combat, are faster in the ring and have increased stamina. 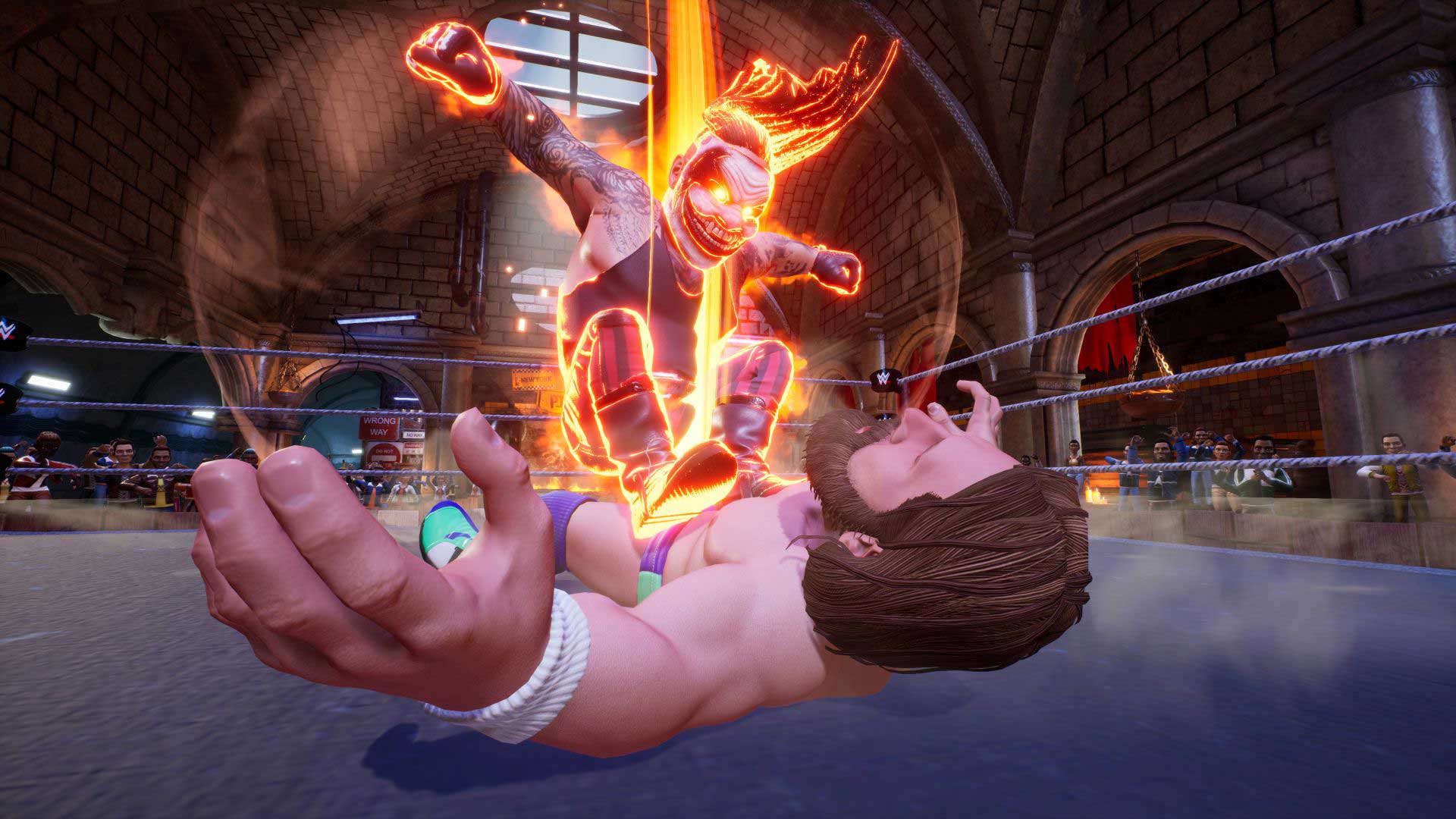 The class system goes a long way to determine the superstar’s abilities and combat approach. For example, some characters cannot pick up a motorbike while “Powerhouse” characters can. You can feel the difference in gameplay from the speed in which they walk to the way they throw their punches. The class system also does a great job adding variety to the gameplay while at the same time prevents you from staying in a certain box.

Every superstar feels different to a certain extent. WWE 2K Battlegrounds is sort of a fighting game when it comes to abilities and attacks. The Undertaker, for example, has some of his iconic grab throws along with his signature move. These attacks are performed when the middle circle filled up under my character’s feet. They are unblockable too giving you an advantage in combat. You can also chain together punches and kicks to perform combos and initiate special moves of each attack by holding down L2. However, this uses stamina and this has to be taken into consideration. WWE 2K Battlegrounds is crazy at times. Everything about it is over-the-top and throughout the game, you get to experience some mad wrestling matches. Every character has overly-sized hands a huge head. Their abilities are also well-designed to make you feel awesome when performing them. Billy Huggins, a wrestler designed for the game has a cool attack that sees him spin his opponent around, pull out a plastic hammer and wallop them with it. This sort of move just won’t work in the mainstream WWE games. These abilities also make the game feel so great. The fire coming out of the Big Show’s fists as he slams them into his opponent or the crowd cheering as I tossed Baron Corbin into an crocodile’s mouth sitting by the side of the ring. It is what makes WWE 2K Battlegrounds fun to play.

Saber Interactive then added a Power-Up system into the game where I could equip a range of skills on each character. These helped buff them during matches. Some even helped heal them too. These skills help turn the tide of a challenging match by buffing your wrestler and even nerfing your opponent. For example, one increased the damage of weapons while another decreased the stamina bar of my opponent. These Power-Ups are fun to use and can be earned by simply playing the campaign. 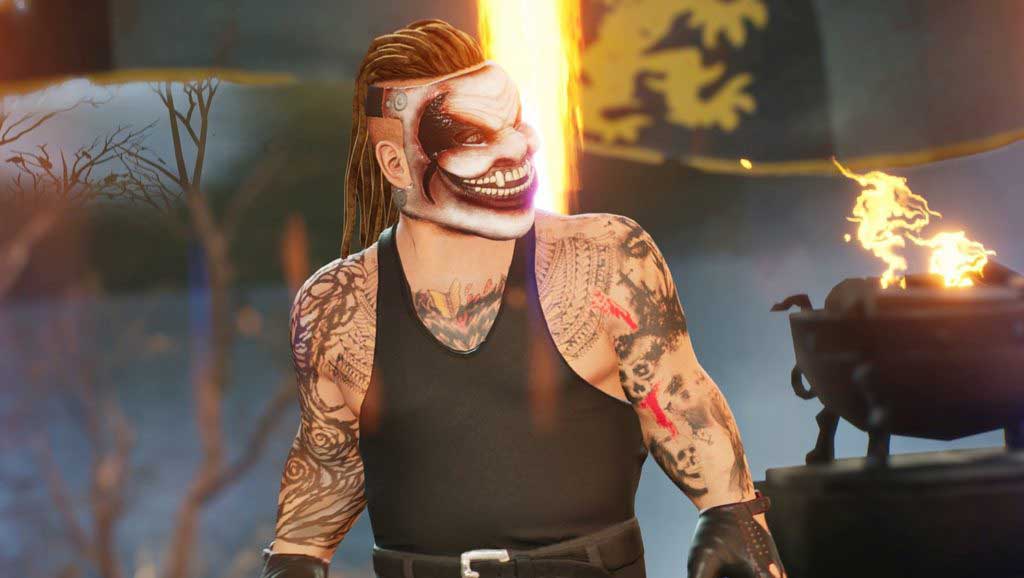 Speaking of the campaign, it is the juice of the game. The story follows Steve Austin as he travels across America creating Battlegrounds in crazy locations. These Battlegrounds are wrestling rings that wrestlers need to keep control over. Thus, other fighters arrive in different locations to try and take them away from the owner. However, while that is the idea of the story, it plays out in a comic book-styled series of chapters. I met new wrestlers along the way and fought them in order to progress to a new battleground, unlock new playable characters and skills.

Each Battleground takes you to a new location with cool new ways to fight your opponent. New York is an underground train terminal while Florida is a swamp with hungry crocodiles by the sidelines. Every Battleground features an interactive environment that you can use to your advantage. This is just another unique feature of the game that makes a match fun and entertaining.

When I was not playing the campaign I was playing the vast set of modes. This includes the classic one-on-one, Steel Cage, triple threat, fatal 4 way and more. Anyone familiar with wrestling will feel right at home here. This is all playable through couch co-op or online and make for a fun time indeed. Steel Cage is my favourite. I had to climb a cage to grab money bags and escape before my opponent. Add a few friends on the couch and you have yourself a hilarious brawl. Something past WWE games failed to deliver in my opinion.

WWE 2K Battlegrounds manages to carry itself thanks to its fun gameplay. Matches look great, combat feels good and when you perform your skills you feel like a badass. I could not help but sit back and in awe at times when my wrestler kicked ass in a match, hit an opponent with a Kedo stick given to me by an audience member and then tapped out my opponent. WWE 2K Battlegrounds is not short of fun gameplay and magic is how easy it is to master. No more analogue sticks to twirl around and no more bars to time a perfect button press on. We then have the roster of characters. There are loads of them including classics like Hulk Hogan and new ones created just for the campaign. However, while some are unlocked through the campaign, most of them are purchased with in-game currency. Sure, you earn it by just playing but it takes forever. 2K Games clearly wants you to put your credit card into this game as the experience is littered with microtransactions. Not to mention the missing wrestlers too.

It comes at no surprise. You need to purchase wrestlers and even cosmetic items you can equip onto your own created fighter too. Want a cute Pug puppy costume? It costs 12k in-game credits which is about over two hours of playing. While it is fun to create a character, it ruins the creator mode knowing the best stuff you need to buy. It does not ruin the game but you are going to need to spend countless hours or lots of real money here to unlock everything there is to offer.

WWE 2K Battlegrounds is fun. Its campaign is enjoyable, there’s a lot of content to play through here and the experience is carried by its over-the-top gameplay. Sure, some characters look strange, there are some buggy gameplay moments and the unlockables are a grind. However, the arcade approach makes this one of the most enjoyable wrestling games in a long time. The cartoon style just may not be for everyone though.

This WWE 2K Battlegrounds review was based on a code sent to us by 2K Sports.