South Africa has a new gaming energy drink on the market called X-Gamer and the guys over at Apex Interactive, the distribution company responsible for bringing it in, sent me a tub of it along with some sachets of flavours to test out.

My daily life revolves around me waking up super-tired from going to bed at 00:30, stumbling to make coffee and searching the high heavens for motivation. I then work the whole day running the site, filming videos and doing whatever else needs to be done so GLITCHED is oiled. Energy is a problem for me. I work from home so motivation levels are often low which leads to me being tired and just not in the mood for anything. 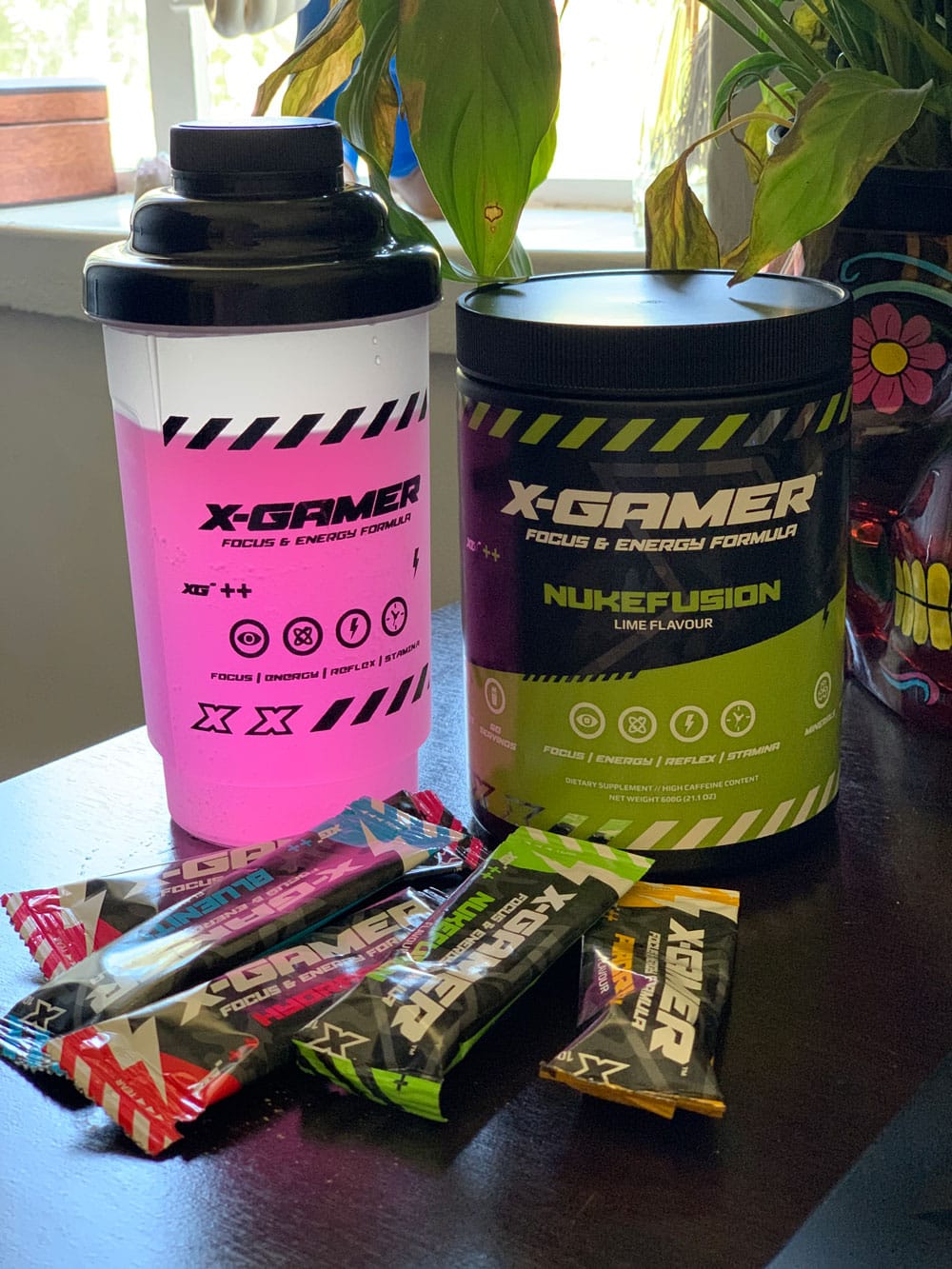 The X-Gamer energy drink may look like some steroid junkie’s protein supplement from the outside as the tub has the same look and feel to it, but inside it is very different. The 600g tubs have a range of vitamins and minerals in the powder that is not as unhealthy as I thought it would be. Instead, you have a sugar-free, 27-Multi Vitamin complex that boosts your energy levels and gives you some much-needed healthy vitamins at the same time.

When I got my pack of X-Gamer, I wanted to see how making two drinks per day would help. One at around 11 am and the other at 6 pm. Making it is simple, you just plonk two levelled spoons of the powder into 500ml of water and mix it. The powder dissolves quite fast without you needing to put any effort in and you are good to go.

Apex Interactive sent me a shaker so I just made the drink in that. Now, about those flavours. The brand is not clear on what the flavours actually are and instead gives each type a cryptic name. It was exciting opening the sachet of “Hyberbeast” to discover it is actually a fruit punch-like flavour and the “Hydrastorm” being a cola flavour (and my favourite one).

You can see all the flavour names and what they actually are on the official site, something I only discovered after opening all the sachets.

Each tub has around 60 servings in it if you go by the “two-spoon per 500ml” directions.

The formula promises to help with focus, give you energy, reflex and stamina. Basically, you can bundle the results of drinking this into two categories; energy and focus. Come 11 am, I made a mix and within a half of an hour, felt better and had an energy boost. Again at 6 pm, I made another, and it lasted the evening until I hit the pillow. Nights that I decided not to make a drink, I felt a lot more tired around 8 pm and the later it got, the harder it became to stay away. I spend a lot of my time at night gaming probably from 6 pm until midnight and the drink definitely helped me focus and gave me energy.

One thing I noticed is there is no “crash” that occurred after drinking the mix. Both Monster and Red Bull always hit me hard after a few hours when it wears off and I land up half dead. X-Gamer was a little different. Sure, I was a bit more tired but it was a gradual slope down instead of an instant exhausted feeling.

Each serving has 129kj of energy, 200mg of caffeine and 1000mg of taurine, for those wondering. There are other ingredients such as 31.2mg of niacin and 3g of carbohydrates but a lot of it is also made up of vitamins.

Yes, it does. There was no doubt a big boost in my energy levels and focus after having a mix. The two a day, as recommended, was enough to keep me awake and proactive. Does it replace the mainstream energy drinks on the market? No, but there are advantages to that. X-Gamer, in my opinion, tastes a lot better than many of the energy drinks sold and the lack of the “crash” is a big plus for me. It is not something that should replace your vitamin cocktail either as the promised minerals and vitamins are just there to give you some nutrients and don’t make up the bulk of the mixture. X-Gamer is a focus and energy drink that helps you with your energy levels and gives you an “upper” in concentration. It tastes good and is something you can just make and enjoy when you need a little pick-me-up.

X-Gamer is not badly priced in SA. You can get a tub (60 servings) for R499. You can also purchase a shaker and a 6-pack of sachets for R199. However, I do believe the sachets are a little overpriced. R20 a sachet is a bit extreme especially if you want to stick to the twice-daily drink recommendation. It would cost R1,200 to buy 60 sachets that make up a tub and buying a tub means you are stuck with that one flavour unless you fork out more cash.

The range is now available at Takealot and other retailers in SA.

Note: This drink is not recommended for children and pregnant women