Advertisement
Y: The Last Man Comic Series Could Be The Best Read During This Pandemic
"Just a male and his monkey" When I sit back and think about it, I find it hard to believe that the last twelve months have really happened. Killer virus, worldwide pandemic, prohibition, masks, level 5 lockdown – these are all things straight out of a Stephen King novel, not real life. Yet here we are, a solid year later, and not only have we (me, the writer and you, the reader) survived but we’ve also slowly adapted and found a way to live through all this craziness – and that brings me to the reason why we’re here, Y: The Last Man.

From comic-book legends, Brian K. Vaughan (Paper Girls; Saga; Lost; Runaways) and Pia Guerra (Doctor Who: The Forgotten; MAD Magazine) comes a post-apocalyptic pandemic story that feels so familiar and yet is unlike anything I’ve read before.

Imagine, if you will, that one seemingly insignificant minute everything is as it always was, and the next, every male that you’ve ever known, your son, father, brother, boss… dog… all just drop down dead. That’s the premise for Y: The Last Man.

A mysterious plague has killed off every male, irrespective of species… except for the two exceptions, our lead character Yorick and his male monkey, Ampersand, who start their journey having no idea that they are the last of their kind.

In a world where everything has gone dark and women are suddenly mourning so much unexpected loss while having to clean up the corpses of millions who were once their friends, their family, and their pets, they are also left to face the reality that most of the politicians, scientists, and pilots, among others, have just dropped dead.

The highest-ranking, female government official (Director of Agriculture) has had to become President overnight and suddenly everything we’ve grown accustomed to in the world has changed. It is no longer the safe and welcoming place it once was for our last remaining males who are now on a crazy cross-country journey from Boston to Australia to find Yorick’s fiancee, Beth, who has no idea he is even alive and finally be reunited.

It’s a journey filled with danger as women either see Yorick and his male monkey as humanity’s last remaining hope for survival or as the last remaining plights on society to be wiped out once and for all.

Y: The Last Man is hardly new, having finished with its 60-issue run in 2008 but it’s still just as relevant today as it was when it originally came out. If not more so when being read during this very real pandemic we all currently find ourselves in. 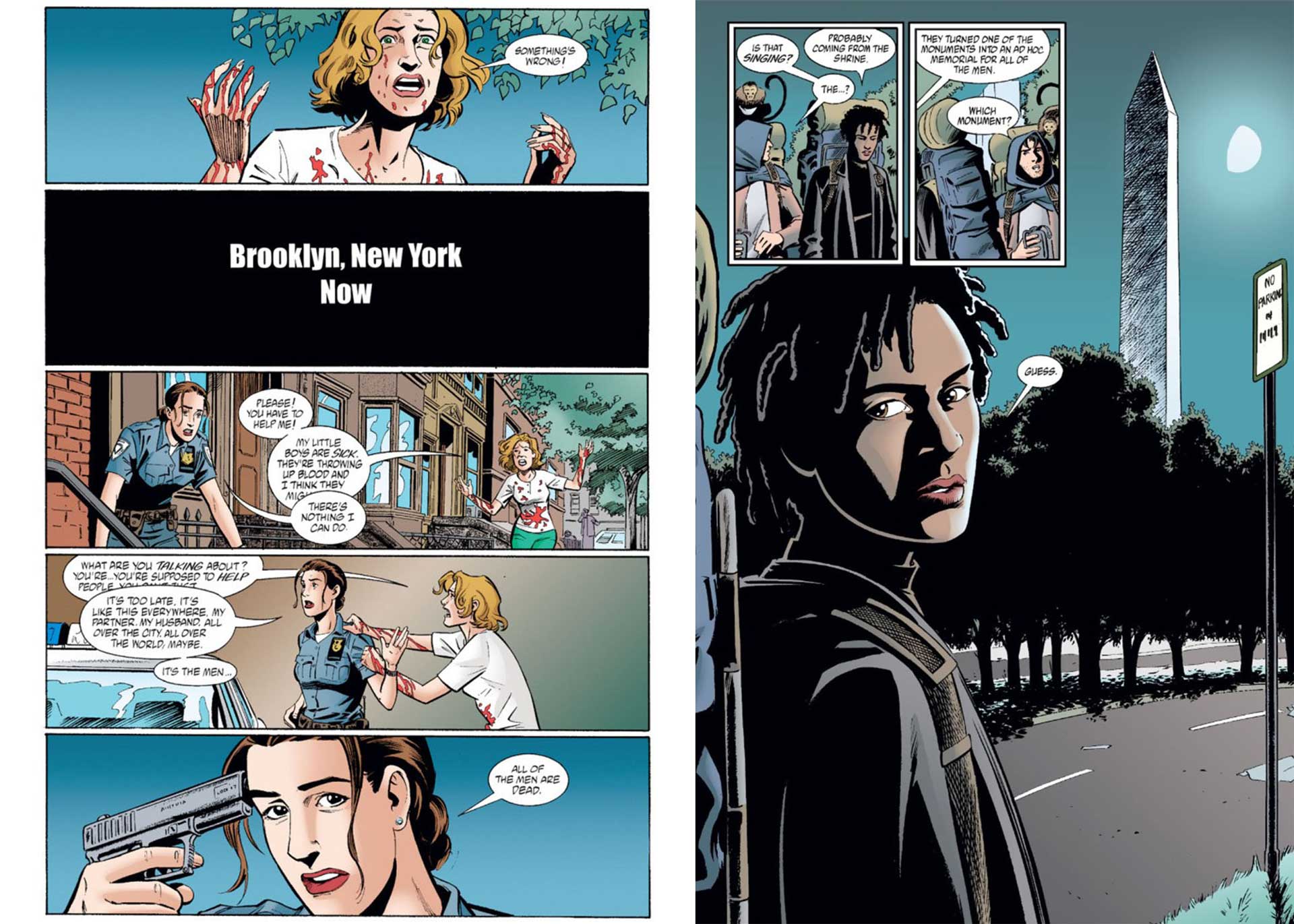 At its core, its a story about the loss and chaos of having to deal with half the world being suddenly dead and everyone else has to figure out how to move forward while picking up all the pieces. In addition, it’s also a story of love, survival and of hope, showing us that no matter how hard things get we can always find a way to adapt and move on.

Some of the best stories are found in the pages of comics, and Y: The Last Man is no exception. Stephen King once called Y: The Last Man the best graphic novel he’s ever read and it’s not hard to see why. It’s a story that’s masterfully told with just the right amount of humour and truly heartfelt moments sprinkled throughout to keep you engaged all the way through.

If like me, you somehow missed this one and you’ve never read it before or even if you have, this is the perfect time to jump in (or to resubmerge yourself) in the story.  After many years of delays, the TV Show adaption is finally due to air this year and honestly, what better time is there to read a story about a pandemic than when you’re in a pandemic?

If you want to pick up Y: The Last Man for yourself, the entire series is currently available in the following formats: Digital; Trade Paperbacks (10 books); Oversized Hardcovers (5 books); Deluxe Editions (5 books); Absolute Editions (3 books) or as a single Omnibus. Those interested can pick them up over at Critters and Comics