Yoshi’s Crafted World is not your average Yoshi adventure. Inspired by the world of craft, the game is a little bit of LittleBigPlanet, Kirby’s Epic Yarn and Yoshi’s Wolly World all put into one.

One of my most favourite games of all time is LittleBigPlanet due to its fantastic use of craft materials that were used to create the game’s visuals and worlds. While Yoshi’s Crafted World is not so much a “play, create, share” experience, the world and every location you visit across this massive game have been developed as if it was put together by your mom that kicked you out of home so she could turn your bedroom into a craft room.

Yoshi’s Craft World is a gorgeous experience that captures the magic of craft through every little detail. Be it the polystyrene ice blocks that you run across in Chilly-Hot Isles, the paper carnival rides of Cardstock Carnival or the yarn that unravels oh-so-beautifully in Pastel Pathway. There is nothing in Yoshi’s Crafted World that has not been built out of something you can find in your scrap drawer and every level oozes with charm. Even the soundtrack sounds like it was put together by a bunch of talented kids given makeshift flutes and other instruments. 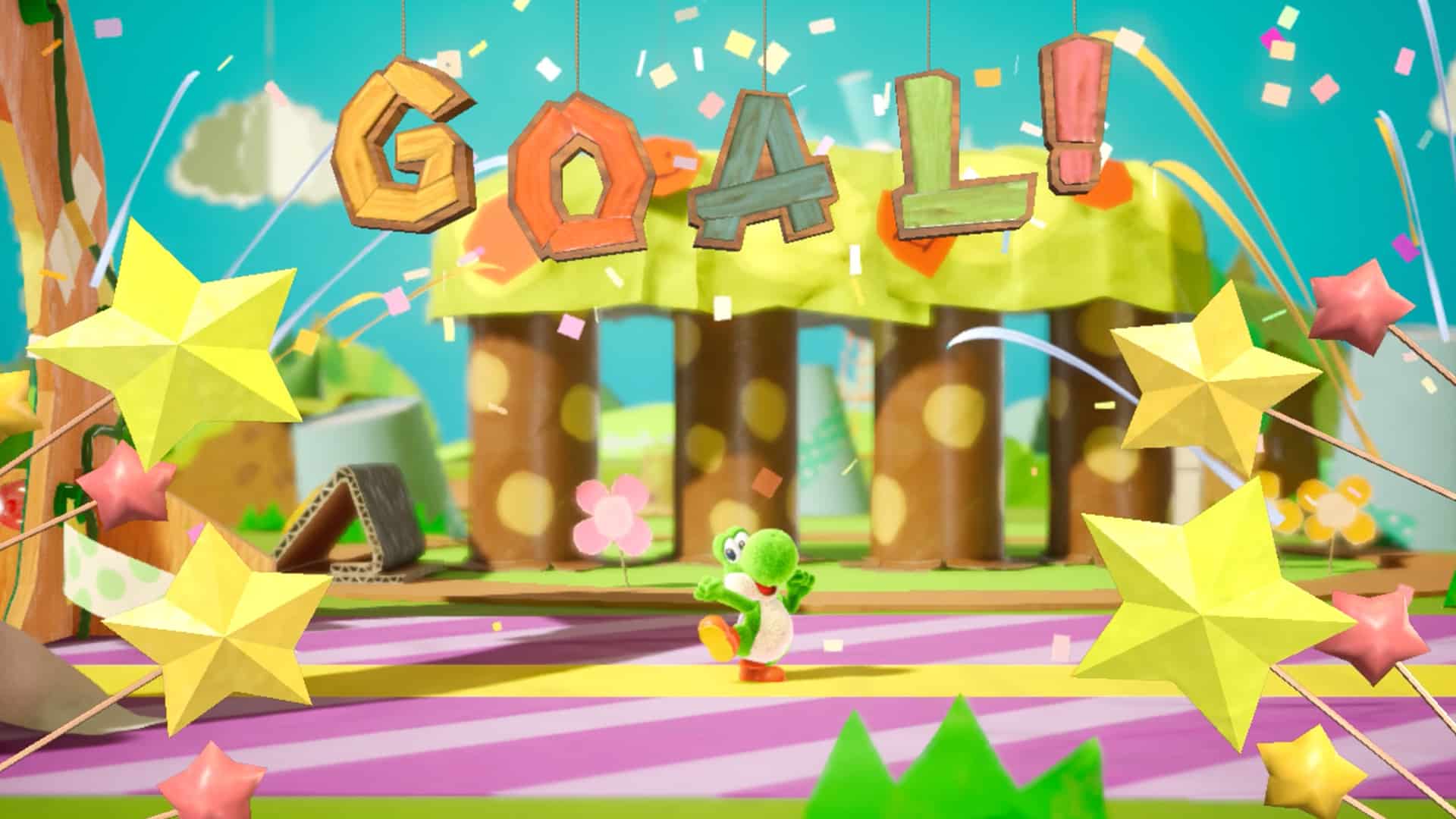 Yoshi’s Crafted World stars Yoshi (who has been made out of wool) as he sets off on a quest to stop Kamek and Baby Bowser from collecting pieces of the Sundream Stone which possesses the power to make anyone’s dreams come true. Yoshi sets off on a quest to obtain the fives stone fragments that make up the Sundream Stone which is now scattered across the new “crafted” Yoshi Island.

Yoshi’s Crafted World is a platformer at best. Yoshi explores various levels each with their own unique look and experience that you will remember well after you complete the game. Instead of tricky puzzles and tough platforming, Yoshi’s Crafted World is quite an easy game but the charm that it delivers manages to carry it through even the dullest stretches. Some levels saw me collect pieces of a train to repair it back to working order while others saw me use a balloon to scare a group of mice into dropping a key I needed to open a door.

Of course, the train was made of tin cans and cardboard and the mice were woollen and they were running around above me on straws that acted as beams on the roof. Yoshi is quite limited in his abilities. He can eat smaller enemies which turn into eggs and toss them anywhere he wants to in the level. This ability might sound simple but it is the depth in the game that you crave after the levels start to blend into each other. By throwing eggs at distant objects, you can discover coins, one of many collectable flowers hidden across each level and red coins too. Often tossing an egg at a clock would kick off a short mini-game where you would have to throw eggs at specific enemies or aim carefully at a group of them to hit the flow before the time ran out. These mini-games is the height of the game’s challenge and while some of them are fun, most of the time they were quite irritating as you would not have enough eggs to toss in order to complete the challenge successfully. 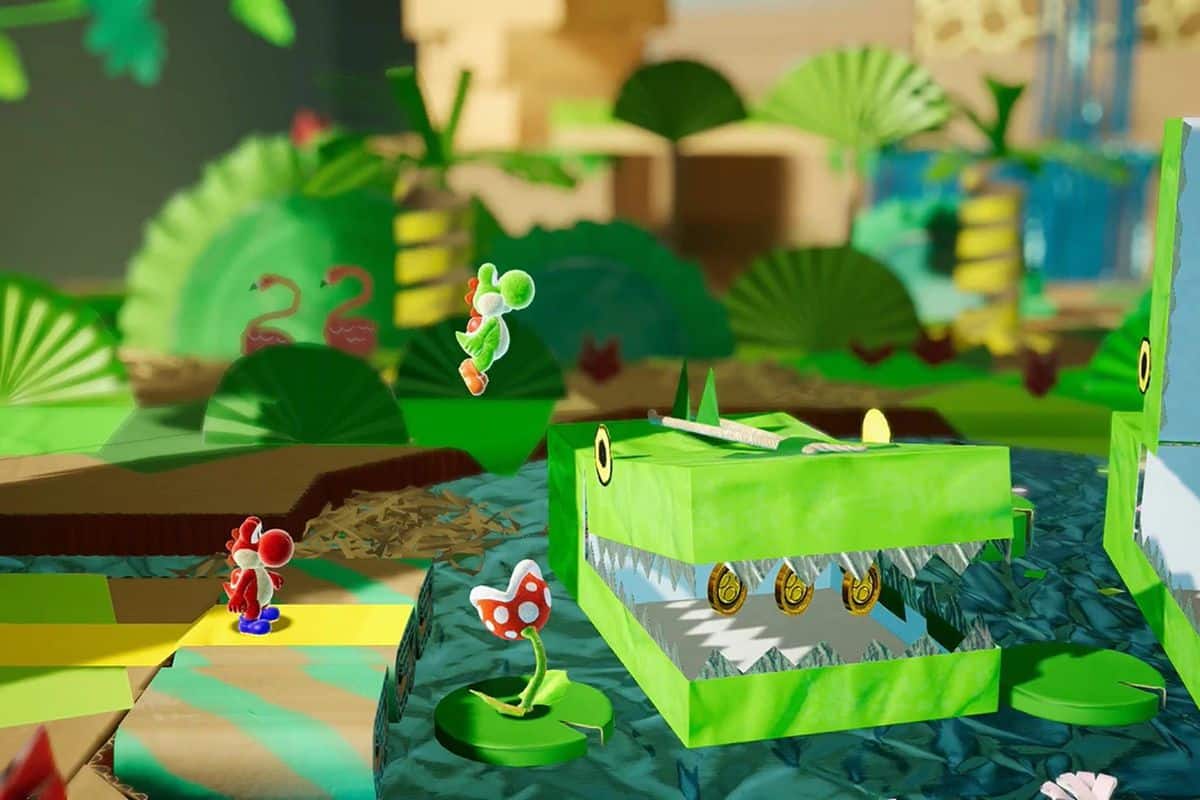 This left me grunting as I missed out on completing the level 100% due to the game not offering me enough eggs to actually toss. It is the life I guess, but on the rare occasion that this happened, it was not fun at all. The ability to throw these eggs at objects adds a sense of discovery to the rather linear experience of each level. You never know what you will find by tossing your egg at the pirate ship in the back of the level but even if it was a simple coin, it was well worth it.

Apart from the typical platforming on each level, you can also replay each stage backwards in a mirror mode called “Flipside” where you need to backtrack in the opposite direction in order to track down Poochy and his two friends. This mode offers a unique approach to the same level you just played and a load of new challenges and hidden items to find. It is pretty much the same thing, but backwards. 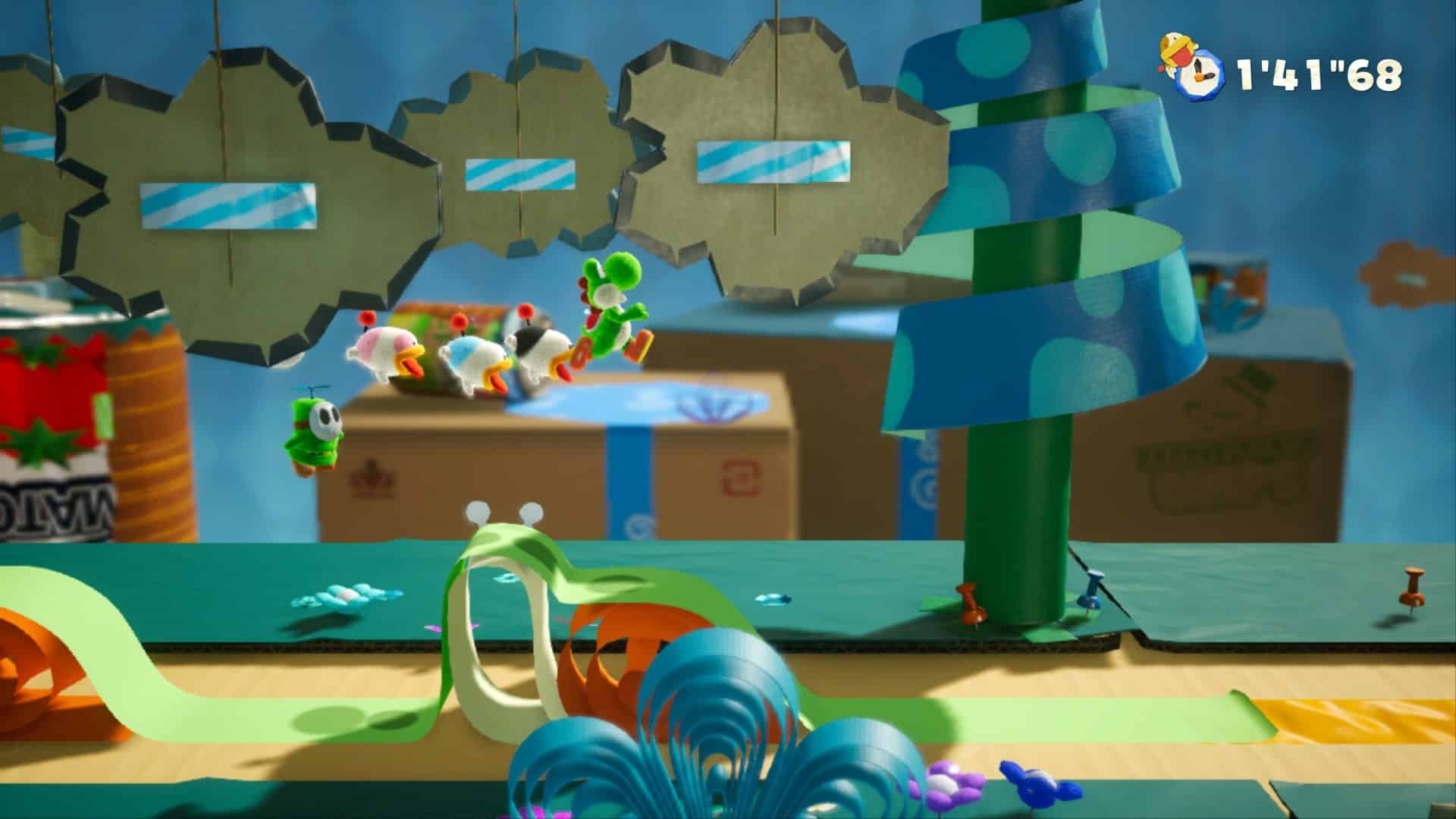 Yoshi’s platforming is not hard at all. He can jump and do his short air hover to help him get to hard-to-reach places but other than that, it is pretty basic. The game has a few levels where Yoshi climbs into a giant robot that can punch through cardboard houses or needs to run across the stage using trampolines and jump through hoops but like everything else in the game, the challenge is just not present at all. Most of the time I was completing each stage without missing anything and getting the highest score on the challenge levels.

Each stage has a set amount of coins you can find and collect which are used to purchase toy balls that contain unique and rare skins for Yoshi to wear but even these add no real change to the game and unless you’re a completionist, you won’t find yourself hunting down coins to purchase all ten costumes for each world hub you visit.

We then have co-op which adds a little chaos to the game as another player being around, gets in the way, as most platformers do. You can carry your co-op partner, literally. They can jump on your back and you can carry them around and jump over hard spots. This feature is great for kids and parents who want to play together but find platformers challenging. The thing is, Yoshi’s platforming is anything but hard and most of the time, it holds your hand without any real threat.

That could be the game’s biggest downfall as it relies on its charm to carry you through the experience but even that dries out halfway through. The overall gameplay gets dated too as even though the world is fantastically created, there’s no real use to it other than the platforming. Going into Yoshi’s Crafted World, I was expecting the game to make better use of its “craft” style in ways like Tearaway did where the crafts become actual game mechanics. This is not the case. 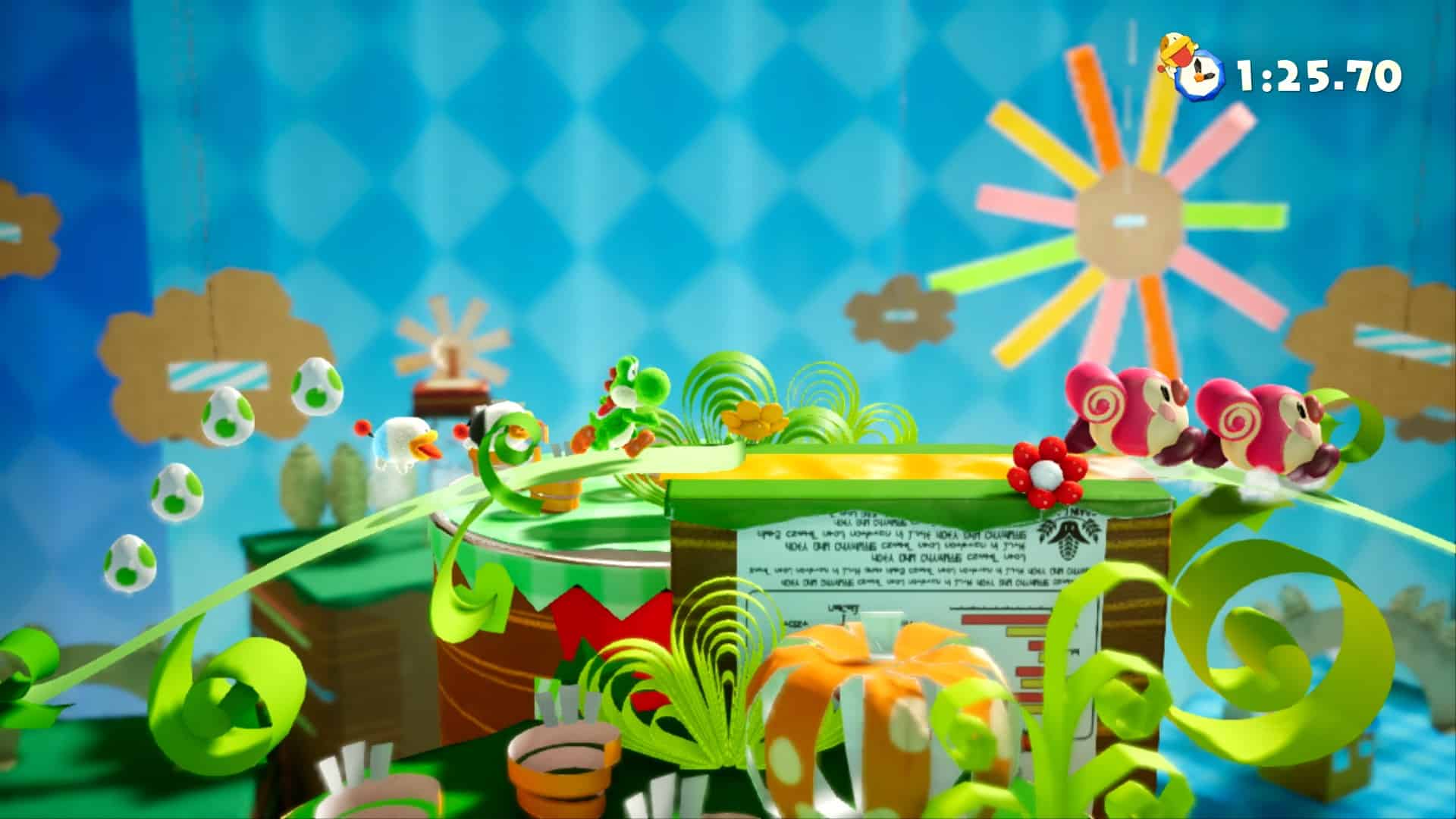 Yes, every stage is magnificent and oozes creativity but Yoshi’s Crafted World plays it safe in terms of mechanics. Super Mario Bros could get away with it because of its unforgiving level design and every stage tests your wits. Once you’ve thrown your eggs a few hundred times, the experience begins to feel shallow. The boss fights help mix things up every now and then but it is just not enough to make you want to spend countless hours in the game.

Yoshi’s Crafted World is a good game. Don’t get me wrong, the levels are simply magical and the platforming is decent but there’s not enough cushion to keep this yarn doll stuffed. Kids will absolutely find joy in the game’s magic but those looking for a challenge will not find it here.