CTR: Crash Team Racing was one of my all-time favourite games back in the day. Going into this remake, I was expecting to have the same nitro-fueled experience that reminded me of the late nights with friends crouched in front of the CRT screen playing four-player split screen races. I was not disappointed. Crash Team Racing Nitro-Fueled delivers a brilliant remake of the classic racer with a full package that is expanded even further with a great customization system and added tracks made specifically for this edition.

Check out the full video review of the game in action below;

It is everything you would remember from the classic racer. The fully-fledged adventure mode sees you take on various themed worlds as you race across over 16 tracks remade from the classics. They are so much of the same but so different at the same time thanks to the gorgeous coat of paint that is delivered across every pixel of the game. It all felt like yesterday the moment I was dropped into the Crash Cove, the iconic first track everyone would have experienced back in the nineties.

From there it was just one exhilarating race after another as I tried to best my opponents by timing by boosts, hoping the crates I smashed contained items I could use to get ahead, and of course edging every corner to get ahead of the pack. At its core, Crash Team Racing Nitro-Fueled is a perfect kart racer and delivers a layered racing experience that you need to embrace in order to master. Grinding around corners and timing the perfect boost is not easy at first but the more you practice, the better it gets. 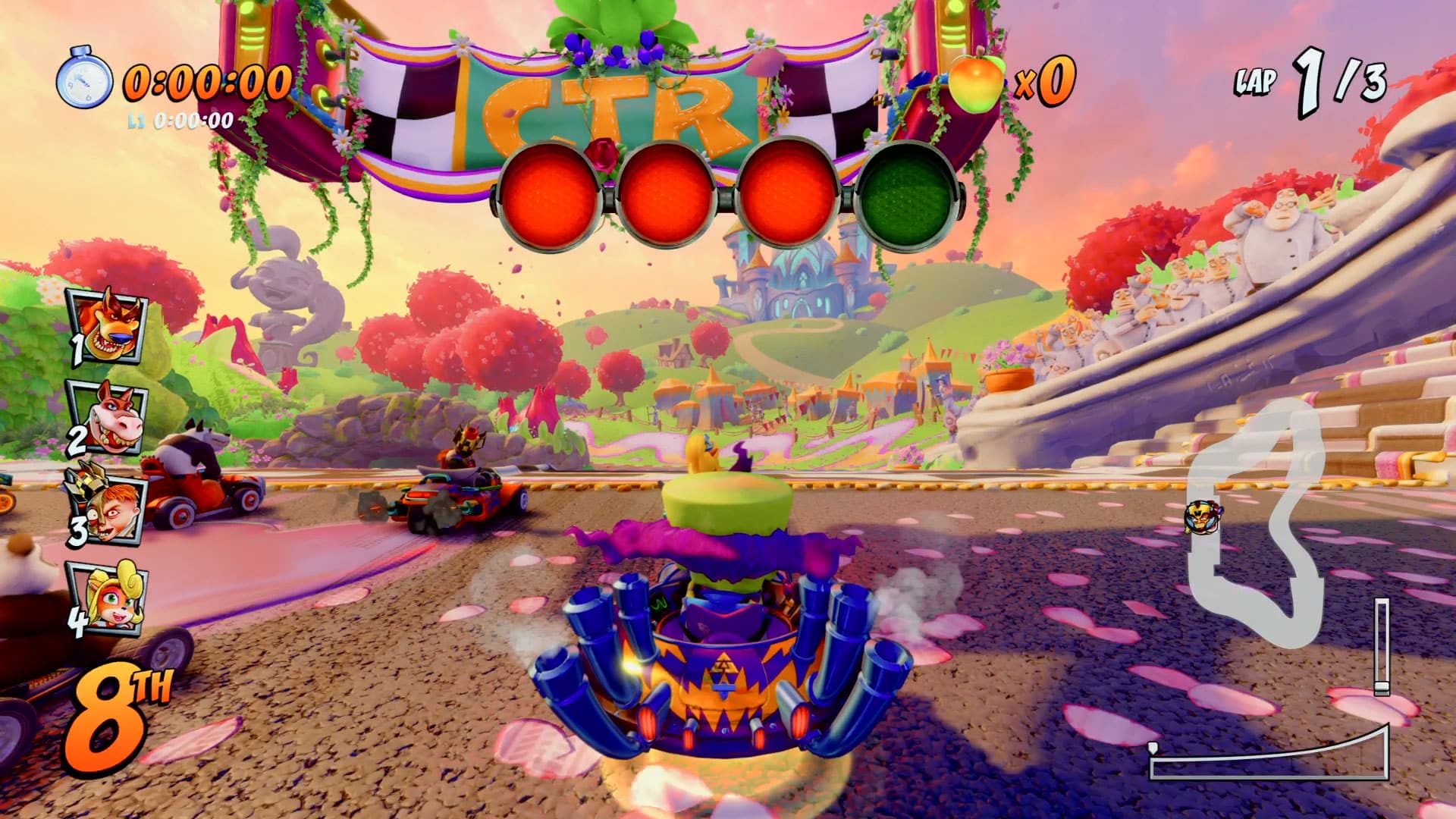 In order to be a successful racer, you need to be able to handle the kart but the overall system does not sway very far from the likes of Sonic Racing and of course Mario Kart. You can boost at the right time at the start of the race to get ahead, leap off hills and ledges to land and get speed boosts and collect Wumpa Fruit to powerup the many items you obtain from inside the crates.

The hardest challenge was mastering the timed grind boosts that see you turn the corner, hop and skid as you tap L1 to get three boosts of speed. These boosts are done by timing the red bar on the speedometer or just being good at noticing the smoke coming out of your exhaust pipes. It was all so reminiscent of the classic that it felt as if I was playing it all over again. 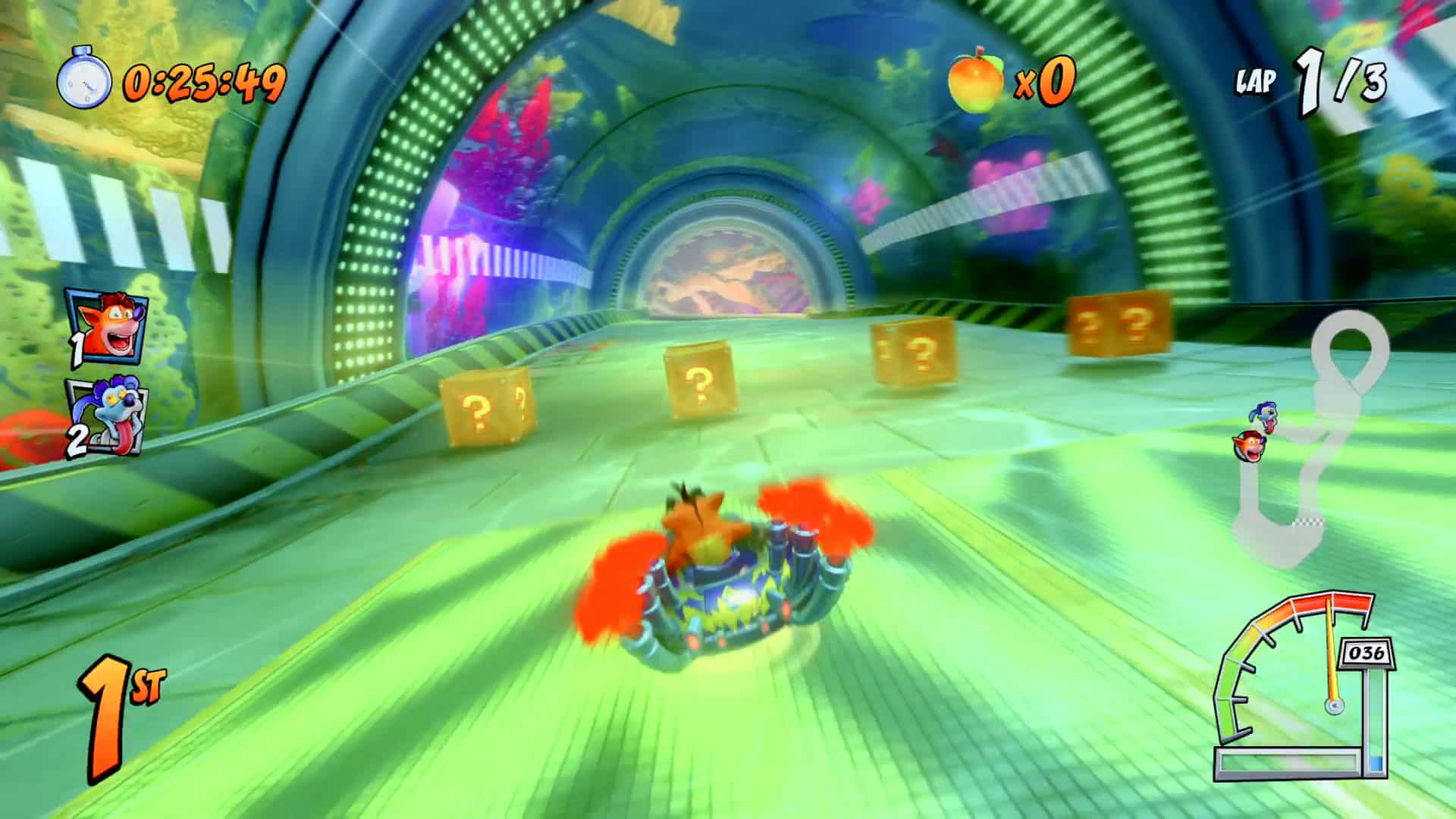 The Adventure Mode is not easy by a long shot. You can select different difficulties before you start the game and whether or not you want to stick to one character throughout the whole game, the classic way of playing, or have the ability to change at any time. I played on medium and it was tough. Some races were a breeze but in every world, there was always one that had a crazy skilled AI opponent that was ahead of the pack just seconds into the race. These moments delivered those really frustratingly-brilliant races that I had to retry a dozen times before just beating that darn polar bear.

We then have the “boss fights” at the end of every hub that sees you go up against the classic bosses before unlocking them to use. The CTR medals are earned by racing through each track and collecting the “CTR” letters, which I could swear was a little easier on the PS One, and the relics obtained by beating time trials. Gems are back and all these “extra” activities give you a reason to go back and replay the great tracks after completing the adventure mode. Another great reason to keep playing is the customization and Pit Stop. This new feature is great if you are playing the “Nitro Fueled” version of the adventure mode where you can change characters on the fly and switch between different looks for each of them. Each character has a level system between beginner and expert which adds a change to the overall racing approach depending on who you choose. It was nice to switch things up when I was stuck on those tougher races.

Characters and karts can then be customized using unlocked skins and kart parts either obtained from doing specific things in the adventure mode or purchasing them using Wumpa Coins in the Pit Stop. These customization items come in different rarities from common to legendary and the skins especially look great the rarer they are. Crash Bandicoot has few skins ranging from a Shuba Crash to the Scuba Crash and Cortex goes from a purple-skinned villain to a robotic version with a simple skin change. These skins are immaculately detailed and more than just a paint job giving you something to play towards. 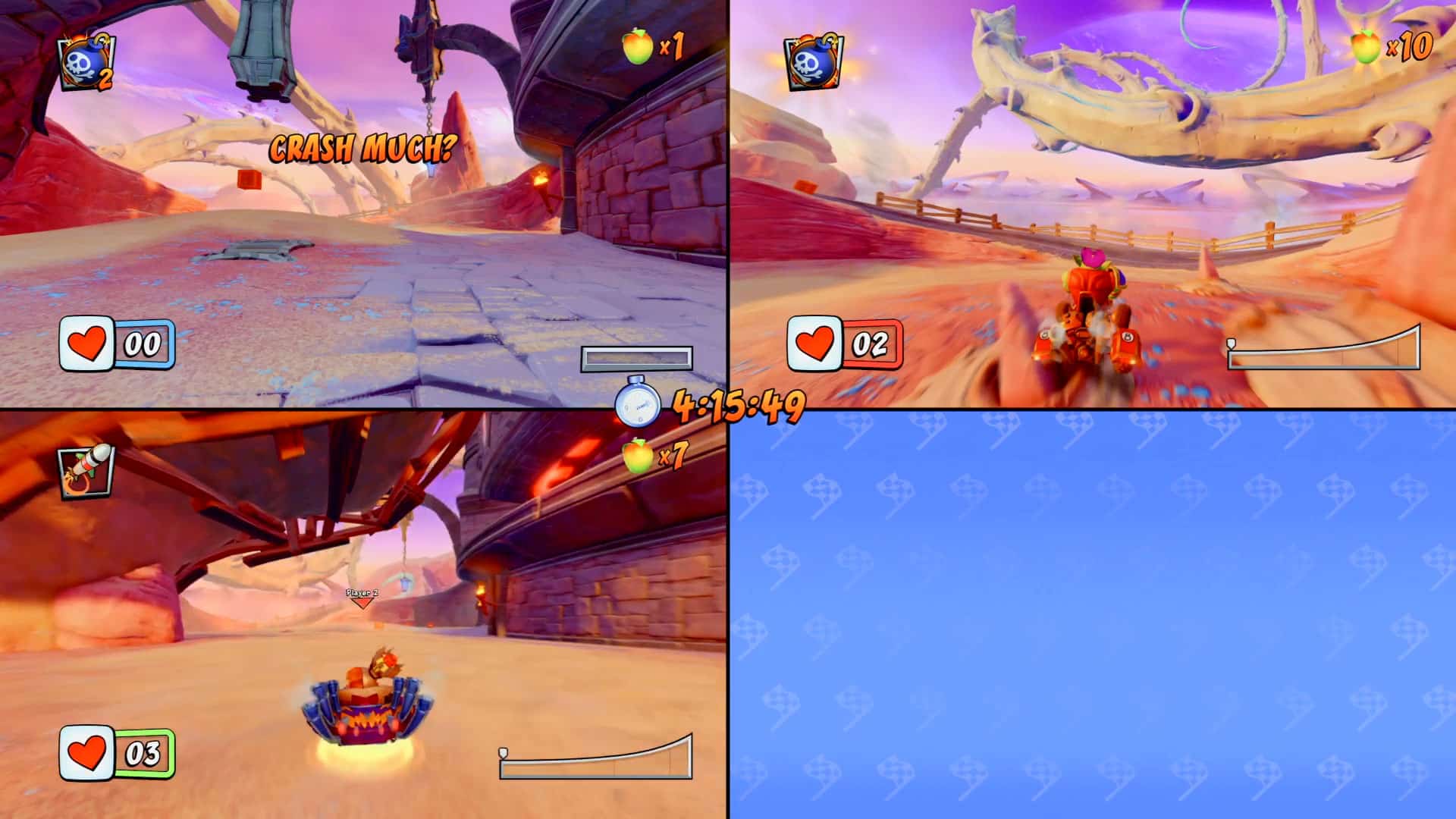 Wumpa Coins are obtained from doing everything in the game be it the adventure mode or even some split-screen battles. They are rewarded in a small amount but there is a decent divide of unlockable skins and parts from doing activities and those only obtainable in the Pit Stop. Give or take two legendary skins per character obtainable in-game and the other two in the Pit Stop.

This is all then backed up by the massive roster of characters. You can select across over 25 of them but of course, you need to unlock most of them by completing certain requirements. N Tropy, for example, requires you to beat all the time trials and Fake Crash earning the Purple Gem. These are no small feats so when you take your character online, people will respect that you have unlocked him. You can then equip skins for each of them and really stand out when you are playing with friends and online, something the game never had originally. It also helps that the game packs all of Crash Nitro Kart’s content into it too so you have Zem, N Trance and all the great tracks included in the game too like Jungle Boogie and Android Valley. I never played much of Nitro Kart so these tracks and characters were a little unfamiliar to me but a great way to discover new things.

Outside of the Adventure Mode, we have the Arcade side of things. These single-player and split-screen game modes are the classic battles, Crystal collection matches and of course the cup races where you race through four tracks to see who of your friends are the best. Beenox has done a great job bringing the classic experience to modern hardware here too offering countless hours of gameplay and content for those gaming nights with friends. 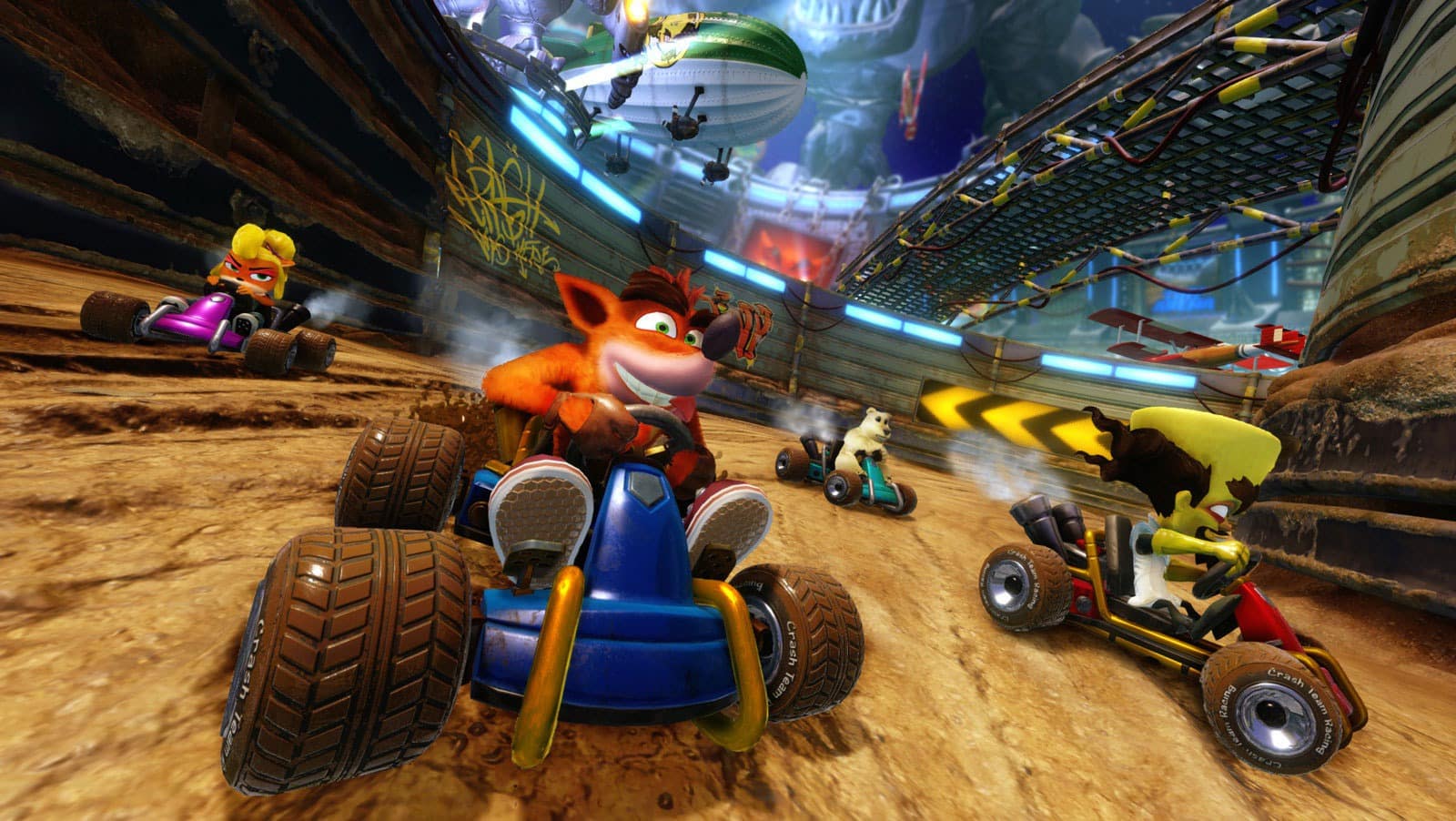 The online mode is the lack of Cup Races which means you cannot choose to race through four tracks in a longer tournament-styled mode.

Crash Team Racing: Nitro Fueled also has a multiplayer mode where you can create online lobbies with friends, add bots and set up matches across the many arcade modes including the battles and races. Servers were quite empty during the review process but I managed to race two tracks with a full server and set up a battle mode with a friend and some bots. Ping was low and the experience was overall enjoyable. The only missing factor in the online mode is the lack of Cup Races which means you cannot choose to race through four tracks in a longer tournament-styled mode. Instead, it is just one race after the other.

After hours of racing and countless moments raging, Crash Team Racing: Nitro Fueled felt at home with the younger version of me. Sure, we live in a different time now with online multiplayer but this game will somehow still manage to be that one we all play when we need some split screen goodness in our lives. I do wish the multiplayer was a little more fleshed out and let local players go online against other players but it is not a kart smash. Crash Team Racing: Nitro Fueled is everything and more you expect from a kart racer and has done the classic justice and for the asking price, it is one juicy Wumpa Fruit of a package.

This review is based on a review code sent to us by Activision.

A Revamped Marvel's Avengers Experience is Still Happening in 2021

A Revamped Marvel’s Avengers Experience is Still Happening in 2021